Southwestern Utah is home to what may be the largest terrestrial landslide complex known in the world. This is an exciting new discovery and much remains unknown, but the ancient Marysvale gravity slide complex (MGSC) is now the focus of new research to better understand its extent, age, and emplacement mechanics. By way of background, gravity slides are a special class of extremely large and geologically complex landslides several tens to thousands of square miles in extent. Here we refer to them as mega-landslides or slides for simplicity—they are larger and far more interesting than we ever imagined. 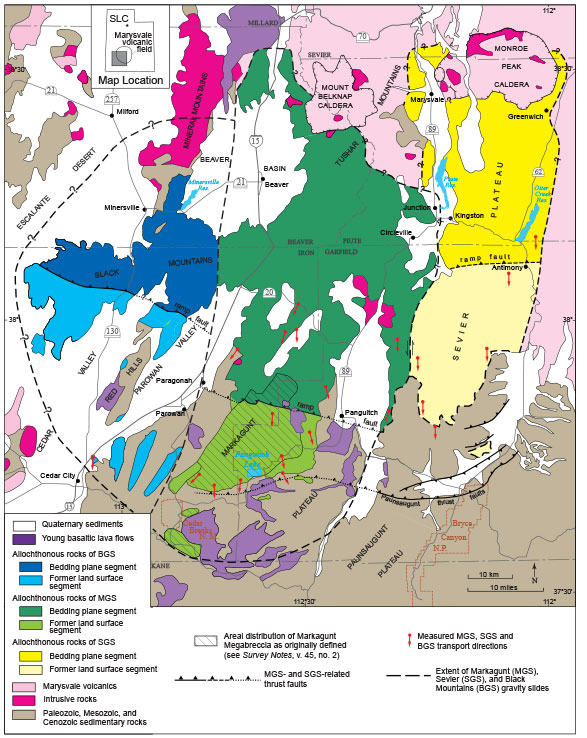 The Sevier (SGS), Markagunt (MGS), and Black Mountains (BGS) gravity slides are each
among Earth’s largest terrestrial landslides. We continue to work to define the northern
extent of the slides, and the strata that may post-date and thus bury their northern
reaches. The Markagunt Megabreccia is what we now call the deposit of the MGS.

The history of this discovery reflects decades of work by dozens of geologists and is outlined in a new technical guide we published in 2019 through the Geological Society of America, The Gigantic Markagunt and Sevier Gravity Slides Resulting from Mid-Cenozoic Catastrophic Mega- Scale Failure of the Marysvale Volcanic Field, Utah, USA. As outlined in that report, we have learned a lot since sharing our initial understanding of these mega-landslides in 2013 and 2016 (see Survey Notes, v. 45, no. 2, and v. 48, no. 1).

What is the Marysvale Gravity Slide Complex?

The Marysvale gravity slide complex comprises three ancient, gigantic landslides. Each slide is made up of volcanic rocks that erupted from Cascade-like stratavolcanoes of the Marysvale volcanic field, and distinctive, interbedded ash-flow tuffs erupted from Yellowstone-like calderas:

Each mega-landslide exhibits the full range of structural features commonly seen in modern landslides, but on an enormous scale. These features include:

How Big is the MGSC?

The MGSC covers more than 3,000 square miles (>8,000 km2), an area nearly the size of Yellowstone National Park, with a volume of slide debris that would nearly fill the Grand Canyon to its rim. The Markagunt slide is the largest among the three mega-slides having an overall length of about 60 miles (96 km) and breadth of 20 miles (32 km), making the deposit at least 1,350 square miles (>3,500 km2) in extent. It is also over a mile (1.6 km) thick in its northern reaches at the breakaway zone in the modern-day Tushar Mountains, tapering southward to several hundred feet thick on the central Markagunt Plateau. Vital statistics of the Sevier and Black Mountains slides are similarly impressive, and runout over the former land surface of each slide was at least 20 miles (32 km).

When did the MGSC Form?

The timing of each mega-landslide emplacement is constrained by the age of the youngest rocks it overlies or deforms, and by the oldest undeformed rocks that overlie it. Currently, our evidence constrains emplacement of the:

The slides thus get younger westward, mimicking the westward progression of volcanism in the volcanic field.

Recognizing most modern landslides is straightforward given their telltale signs of raw scarps, open cracks, hummocky topography, and all-too-often damaged infrastructure. But the MGSC exhibits nothing so obvious. It is old. It is deeply eroded and partly buried by younger deposits and cut by later faults. The MGSC is, by any geologic standard, insanely big—so large that we cannot see it from any single vantage point. Still, key pieces of the puzzle remain, and the picture they paint is one of extraordinary calamity near the height of volcanism of the Marysvale field.

Diagnostic rock types produced by catastrophic collapse of the Marysvale volcanic field include:

These and other diagnostic rock types coupled with the uniformity of movement indicators (skid mark-like grooves and striations at the base of the slides), geologic structures within the slides, the overall geometry of the slides, and age and distribution of rocks involved or not involved, suggest that each mega-landslide represents a single catastrophic emplacement event.

How did the MGSC Form?

Ongoing research will more fully answer when each mega-landslide occurred, what event may have precipitated catastrophic failure, and how such huge volumes of rock moved faster than freeway speeds more than 20 miles (32 km) across the landscape. But for now, we suspect several events came together to set the stage for catastrophic failure of the southern flank of the Marysvale volcanic field. 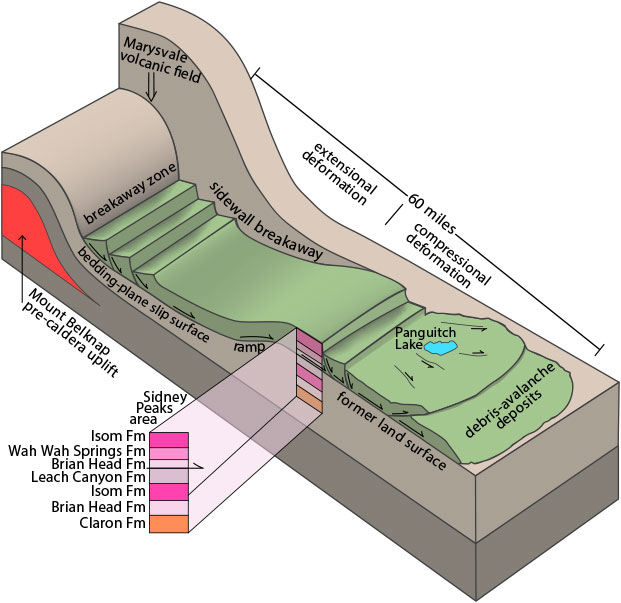 Idealized Markagunt mega-landslide
Here, the trigger is suggested to be pre-caldera inflation of the Mount Belknap area, causing arching of overlying strata and consequent failure on oversteepened slopes. The ramp is where the basal detachment angled upward and “daylighted” as the slide mass moved up and over the former land surface at least 20 miles (32 km). Attenuated strata thinned like a partially spread-out deck of cards, and older-on-younger rock relationships characterize the slide mass in the former land surface area, preserving a stratigraphy inherited from the source area. The Sidney Peaks area is where remnants of the mega-landslides were discovered—note repeated, older-on younger strata.

First, catastrophic failure was preceded by slow, radial spreading of the volcanic field, forming low-angle faults of the unusual Paunsaugunt thrust fault zone south of the field. The thrust faults formed because Earth’s crust simply is not rigid enough to support massive volcanoes—slowly, over thousands to several million years, the volcanic field spread to a larger footprint and thus to a more stable profile.

Second, catastrophic failure was near the end of peak local volcanism. Stratovolcanoes are inherently unstable features—large, steep, massive piles of hydrothermally altered and thus weakened volcanic rock—perched above actively inflating and deflating magma chambers, so it is no wonder that growth and subsequent collapse are typical features of so many stratovolcanoes worldwide (see the new U.S. Geological Survey publication When Volcanoes Fall Down.

Third, the volcanic field was built on a weak foundation of ash-rich sedimentary strata. We surmise that inflation of the volcanic field by intrusion of partially molten rock into the center of the field may have tilted these strata on the southern flank gently southward, providing gently dipping planes in underlying weak strata that would be ideal for sliding.

Finally, multiple volcanoes of the volcanic field failed catastrophically three separate times when its weak foundation could no longer support the growing volcanic mass. Possibly, an earthquake or eruption triggered each of the slides.

Why is the MGSC Important?

The MGSC may be the largest terrestrial landslide complex on Earth and exhibits exceptional evidence of catastrophic emplacement. Only the 49 Ma Heart Mountain mega-landslide in Wyoming is a terrestrial slide of comparable size and it was considered unique until discovery of the MGSC. The MGSC produced mega-landslide structures so large that they may be mistaken for tectonic features—this discovery thus opens the door to re-evaluate other, similar ancient and modern volcanic fields elsewhere in the world that may contain as-yet unrecognized gigantic landslides. Perhaps such mega-slides are more common than geologists once believed? The MGSC also contains the first reported occurrence of landslide-generated pseudotachylyte in North America and one of the few examples known in the world, which shows that emplacement was extremely rapid.

New Research on the MGSC

There is much we do not know about the Marysvale gravity slide complex. Yet our model of gigantic landslides—a holistic view of three types of geologic deformation (extension, simple translation or horizontal movement, and compression) not otherwise directly related to one another in most geologic environments—is a valuable tool to focus efforts to better understand these mega-landslides. Future research will focus on (1) new age and isotopic data to better constrain development of the volcanic field and its repeated partial collapse by catastrophic mega-landslides, (2) geologic mapping to tease out important details about each mega-landslide’s characteristics and history, and (3) analog and computer models to understand the mechanics of sliding such large masses long distances over low slopes. 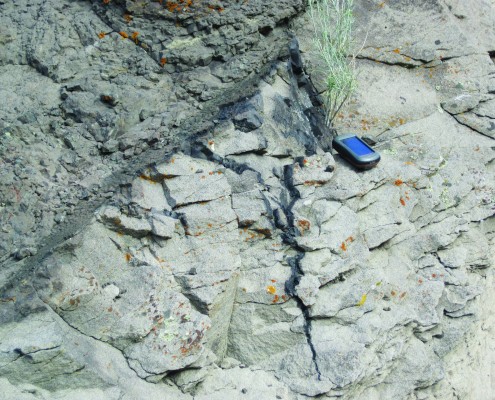 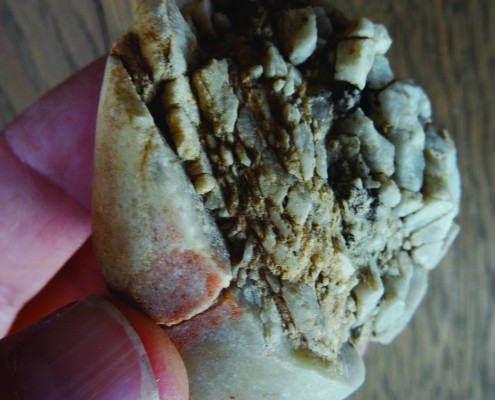 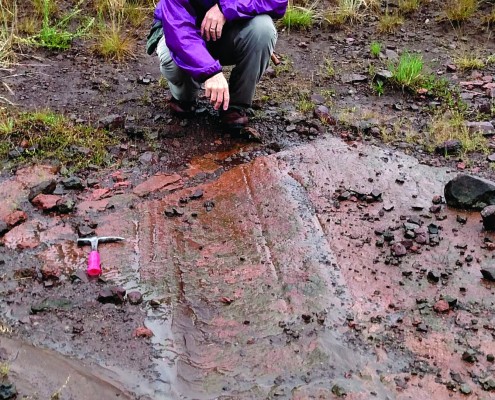 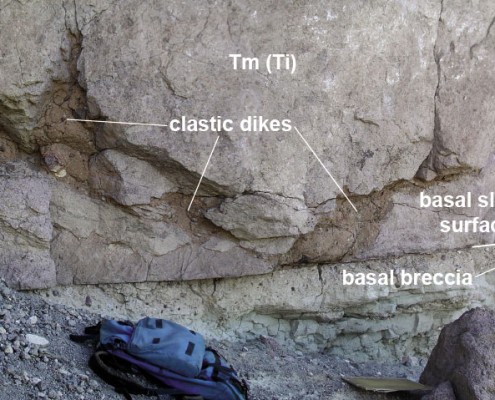 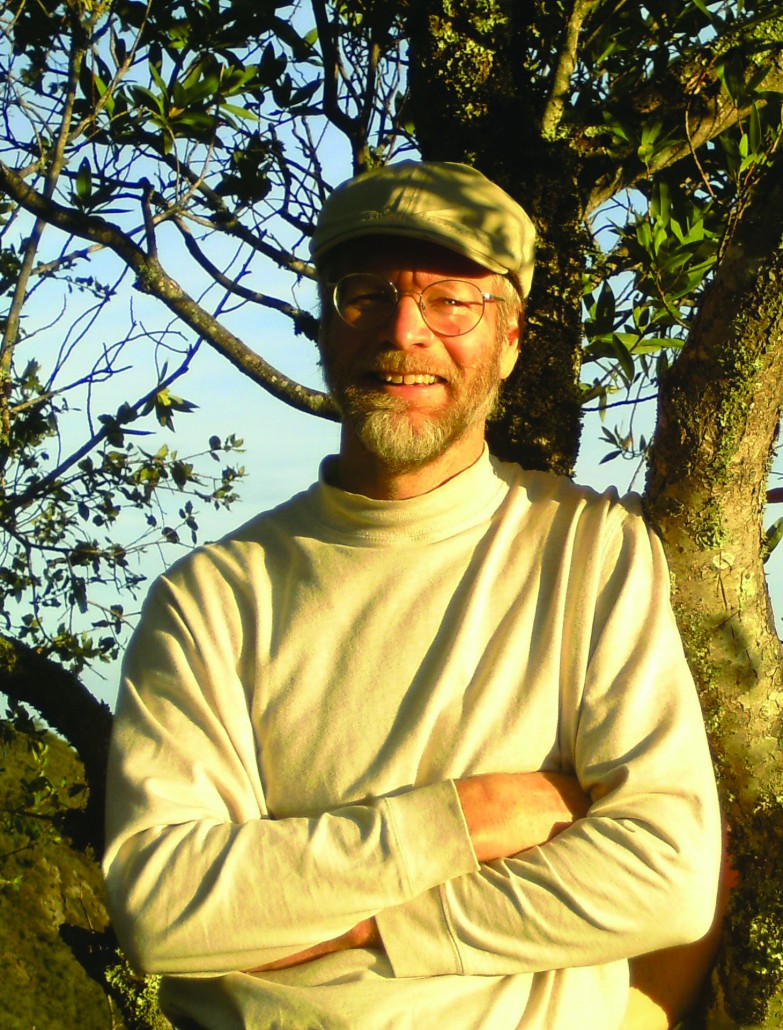 is a Senior Scientist with the UGS’s Geologic Mapping Program, having joined the group in 1996 after four years with the North Dakota Geological Survey. Most of his geologic mapping is in southwestern Utah and along the Wasatch Front, where he has authored over 40 7.5′ geologic maps and the St. George, Panguitch, and west half of the Loa 30′ x 60′ geologic maps. He is continually amazed at what one can learn simply by going outdoors and making a geologic map, and the discovery of Utah’s mega-landslides, with colleagues Rowley and Hacker, is a classic case in point. Bob received his B.A. in Geology from the University of California at Berkeley in 1983 and a M.S. in Geology from Northern Illinois University in 1987. Photo by Steve Ruth.