Glad You Asked: What were those strange white mounds along the shores of Great Salt Lake?

by Mark Milligan and Elliot Jagniecki 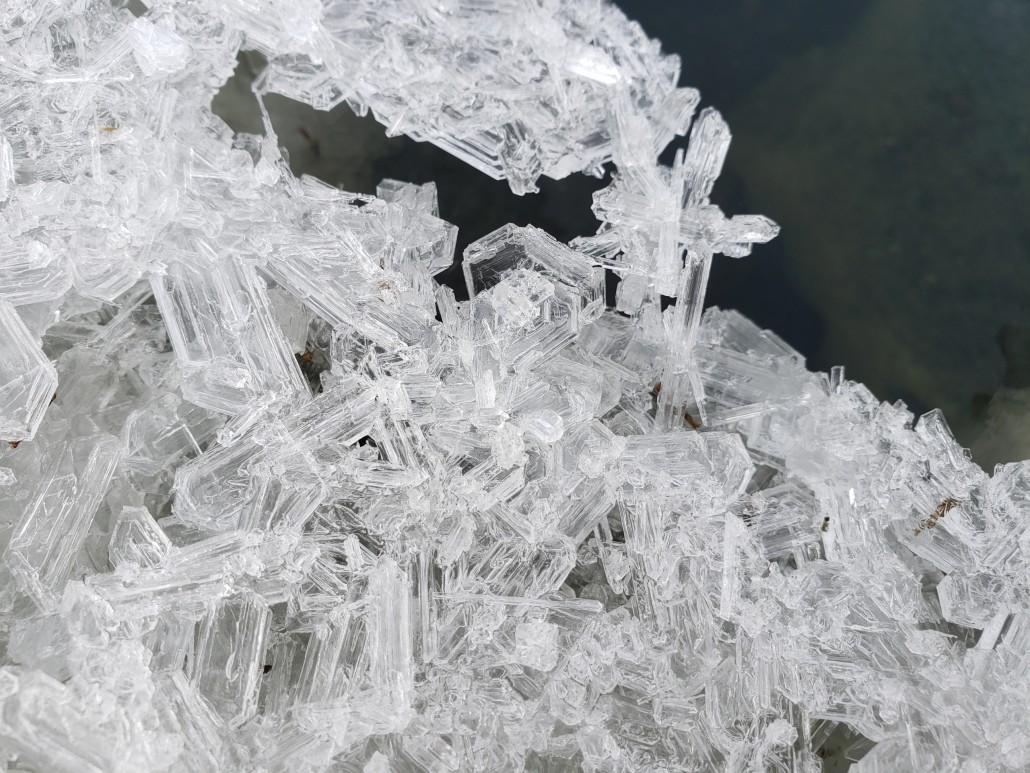 Last fall Great Salt Lake State Park Ranger Allison Thompson noticed some very unusual white mounds growing on the south shore of Great Salt Lake just east of the Great Salt Lake Marina. She documented and photographed the growth of the mounds for several weeks before curiosity led her to seek a geologist to find out what they were. Utah Geological Survey (UGS) geologists determined the mounds were crystalline terraced spring deposits composed of the evaporite mineral mirabilite. The rarity and beauty of these spring mounds, enthusiasm of Utah State Park officials, and a possible connection to Mars research created a flurry of local, national, and international media attention that included on-air television interviews, as well as web and print articles. The second week of January had maximum media exposure and resulted in the Great Salt Lake Marina reporting 1,870 visitors, compared to 537 in 2019. Below are the most asked questions from the public.

What were the white mounds and when did they form?

In late October 2019, as air temperatures started to cool to near freezing, unique mineral mounds began forming on the south shore of Great Salt Lake. They were not composed of common table salt (sodium chloride—NaCl), but mirabilite (hydrated sodium sulfate—Na2SO4·10H2O), also known as Glauber’s salt.

How did the mirabilite mounds form?

When sodium-sulfate-saturated spring water emerged at the surface and came into contact with the cold winter air, the mirabilite crystals formed and built up into mounds. Spring water that slowly flowed and cascaded down the slope of the mound formed a collection of small mirabilite crystal terraces, similar in appearance to the travertine rimstone and dam terraces that form at Mammoth Hot Springs in Yellowstone National Park.

What conditions were needed for the mounds to form?

In the 1940s, researchers investigated this area and reported finding a 3- to 6-foot-thick mirabilite layer 30 inches down in the subsurface. Groundwater may have partially dissolved this mirabilite layer, which was then reprecipitated at the surface as the spring water emerged. It is also possible that sulfate-saturated shallow aquifers occur in the area, and, at times, discharge to the surface and precipitate mirabilite. Temperature and relative humidity mainly control the stability of mirabilite crystals. Mirabilite will precipitate and be stable at sub-freezing temperatures in dry environments but will dehydrate as temperatures increase; with high humidity/moisture the mineral can be stable until about 90°F. Because of Utah’s dry climate, the impressive clear mirabilite crystals that formed the mounds tend to dehydrate to form a white, powdery, easily erodible mineral called thenardite (Na2SO4). Furthermore, the mounds can only form if the area, at an elevation of about 4,194 feet, is above lake level, a rare occurrence until the past few years. 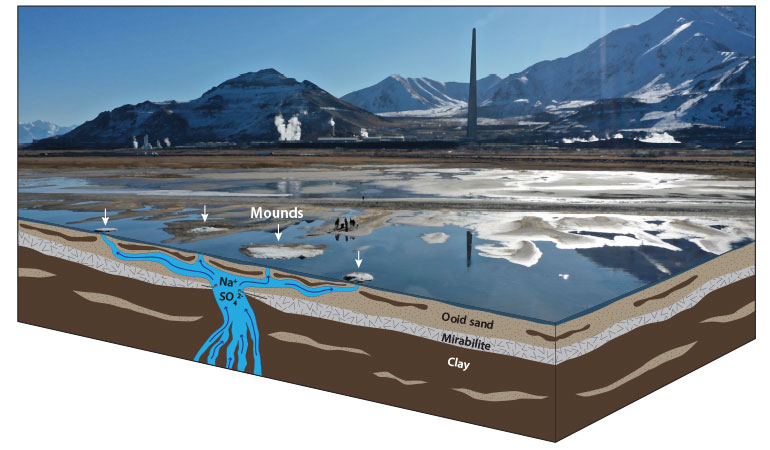 Schematic interpretation for the formation and distribution of the mirabilite spring mounds. View to the south.

Why were there multiple mounds?

It is hypothesized that as the mounds grew, they eventually sealed off their spring water sources, causing the groundwater to find a new pathway to the surface, and thus, a new mound formed a few dozen yards away. As of January 2020, the beach immediately east of Great Salt Lake marina had as many as five mounds that grew up to 3 feet tall and several yards wide. 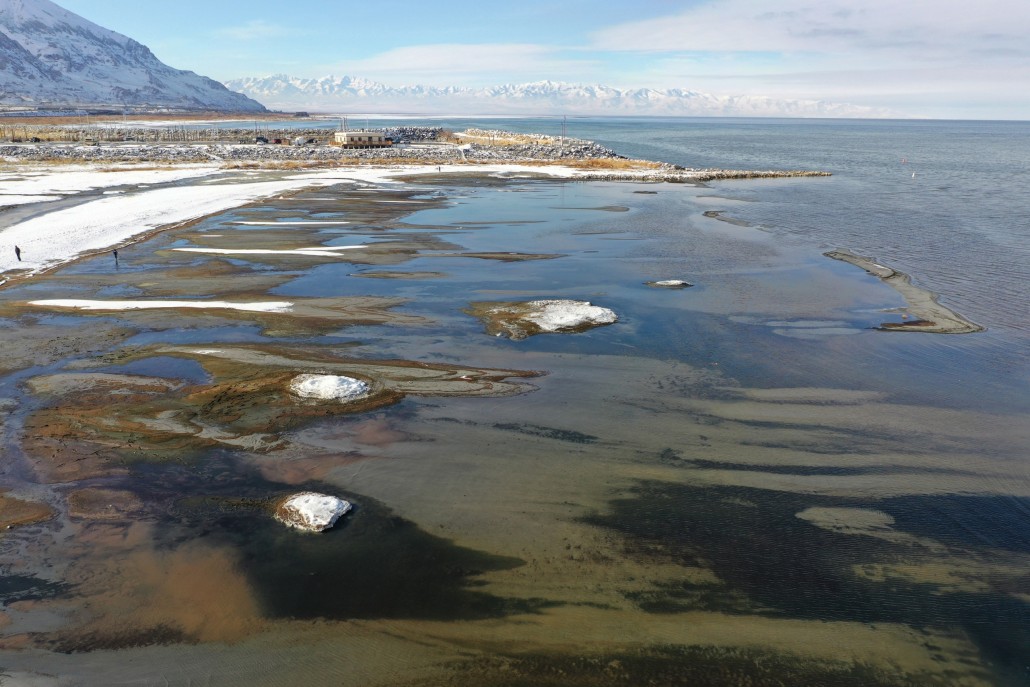 How rare are mirabilite mounds?

The mineral mirabilite is quite common and found in saline lakes around the world, including in the north arm of Great Salt Lake, in great abundance. In certain saline lakes, mirabilite crystals form in the water column, float to the surface, and are washed ashore to form a slushy slurry or dune-like accumulations of crystals. Additionally, mirabilite crystals can grow in shallow depressions along the shores of the south arm of Great Salt Lake. However, terraced crystalline mirabilite mounds formed by flowing spring waters are more rare―they have never before been scientifically documented at Great Salt Lake, though we have received reports of casual observers spotting them in the past. Mirabilite-precipitating springs and the formation of terraced mounds have been documented in a few locations such as the Canadian Arctic, central Spain, and the Antarctic. The flurry of media attention around the mounds on the south shore of Great Salt Lake spurred public reports of additional mound sites elsewhere on the shore of Great Salt Lake that UGS geologists are actively investigating. Wherever they are found around the lake, the features are ephemeral; warmer seasonal temperatures turn the mirabilite to the powdery mineral thenardite. Higher lake levels also inundate and destroy them. These features may or may not reform again next winter depending on lake level and spring flow. 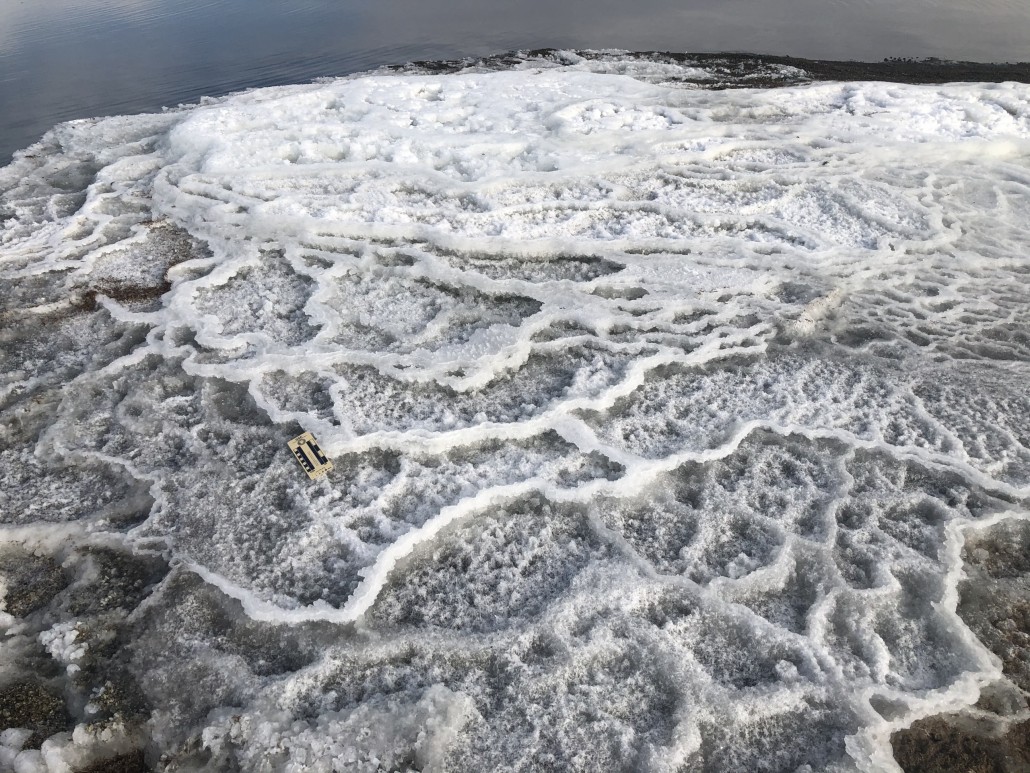 While Mars has conditions conducive to the formation of mirabilite (dry, cold, etc.), the mineral has not yet been documented there. Mars does have topographic mounds that some researchers believe may be related to saline groundwater. In addition, orbital spectrometers have suggested the presence of sulfates on the surface. Because of these similarities, some researchers are interested in the growth of mirabilite mounds on Earth because they may serve as analogues for understanding geologic processes on Mars. Additionally, modern mirabilite mounds are associated with microbial activity, making them especially interesting to researchers looking for evidence of life on Mars.

Don’t tread on me.

Mirabilite mounds are fragile. If you find any, please report them to the UGS and do not walk on them or collect samples. Besides, mirabilite is unstable at temperatures above freezing and dehydrates to form a white powder (thenardite), so the samples would not last more than a day.