The term “battery metals” has come to prominence rapidly over the past five years, and refers to a category of resources that have become essential to powering our increasingly electrical world. Battery metals power our cell phones, laptops, and a growing fleet of electric vehicles, and play a role in bringing renewable energy into our homes. The International Energy Agency reports that in 2018 the global stock of electric passenger vehicles passed 5 million and is projected to exceed 130 million in 2030. The U.S. Energy Information Administration projects that renewables will account for a quarter of global energy consumption by 2040 and nearly half of electricity generation by 2050. Despite fluctuating prices, the case for increased demand of battery metals is strong, and explorers for these metals are active globally, including in Utah. 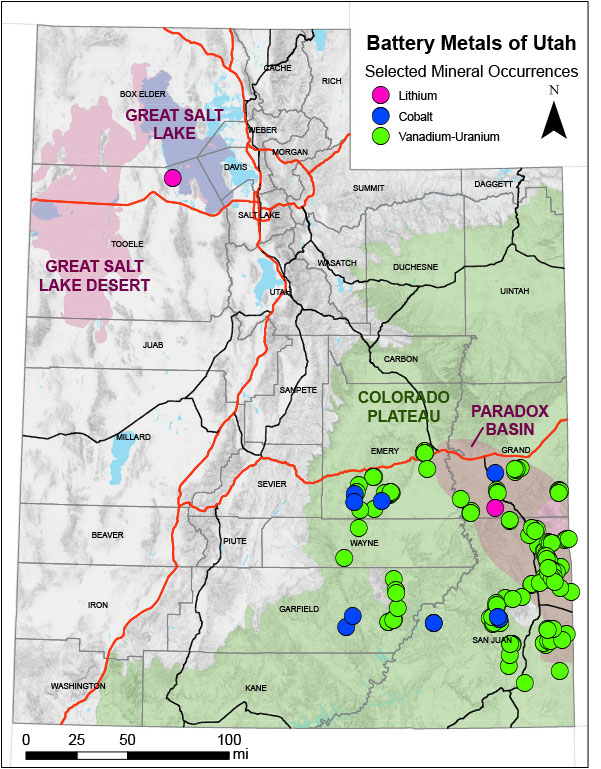 Lithium is perhaps the best known battery metal, as it is the essential component to the lithium-ion batteries that power everything from cell phones to electric vehicles. The leading global producer of lithium is Australia, mining lithium from hardrock sources such as igneous pegmatites. Chile is the second largest producer and has the largest reserves of lithium globally. Chile’s reserves are found in brines, and, in fact, the Salar de Atacama alone accounts for over 35 percent of global lithium reserves (“salar” is Spanish for salt flat). Utah is known for Great Salt Lake (GSL) and extensive salt flats (e.g., Great Salt Lake Desert), so it may seem intuitive that there is lithium-producing potential similar to the Chilean salars. In actuality, GSL brines and the salt flats have lower concentrations of lithium and a higher ratio of magnesium to lithium than found in Chile, making the economics of lithium processing more costly. Lithium produced as a byproduct of magnesium recovery, such as U.S. Magnesium’s operation on the GSL south arm, is the most likely source of lithium production from surface and shallow subsurface brines and salts in Utah. In the Paradox Basin in southeastern Utah, Anson Resources is testing the lithium potential of deep brines extracted from historical oil and gas wells. The current resource estimate for the Paradox Basin Brine Project is about 397 million brine tons at 98 ppm lithium, which equates to 205,500 recoverable tons of lithium carbonate equivalent plus byproduct bromine, boron, and iodine.

Cobalt is another battery metal that has received increasing attention over the past three years. Cobalt is used as a cathode in many types of batteries, including lithium-ion batteries. Currently, the majority of cobalt is mined in the Democratic Republic of Congo (DRC), which accounts for 60 percent of global cobalt production. The responsible sourcing of cobalt has received significant attention in recent years, with particular focus on the health consequences and child labor associated with cobalt mining in the DRC. The pressure for modern companies to have a transparent and ethical supply chain has led to greater interest in cobalt in other parts of the world. In Utah, cobalt is not a primary exploration target but is considered a valuable byproduct, occurring mainly in sediment-hosted copper and uranium deposits. The Copper Ridge project in Grand County is a sediment-hosted copper project targeting shallow oxide copper occurrences, and samples from the project have returned cobalt values up to 0.83 weight percent. Though copper is the main commodity, the cobalt could add significantly to the economic potential of the project.

Vanadium is an increasingly recognized battery metal. Whereas lithium and cobalt are linked more closely with the electric vehicle industry, vanadium is associated with the renewable energy movement. Vanadium redox-flow batteries (VRBs) are high-capacity batteries meant for large-scale energy storage applications, such as ensuring constant baseload energy during periods of low energy generation from renewables like wind and solar (e.g., on still or cloudy days). Although the majority of vanadium is still used for metallurgical purposes such as high-strength low-alloy steel, VRBs are poised to become a significant element in the modern energy landscape. Globally, the largest source of vanadium is from titaniferous magnetite deposits in China, Russia, and South Africa, but the Colorado Plateau has been an important producer of vanadium from sediment-hosted uranium deposits since the early 1900s. During the Atomic Energy Commission’s procurement program from 1947 to 1970, Utah produced approximately 12.5 million tons of ore averaging 0.65 percent V2O5, the equivalent of almost 62.5 million lbs V2O5. Energy Fuels’ White Mesa Mill in Blanding remains the only operating conventional uranium and vanadium mill in the United States, though there is no current uranium or vanadium mining in Utah. In 2018, the mill upgraded its vanadium production capabilities and has been producing vanadium from stockpiles and alternate feeds since early 2019. The Beaver and Pandora uranium-vanadium mines, also owned by Energy Fuels, operated as recently as 2012, and increased demand for vanadium (and/or uranium) would likely see active mining resume. 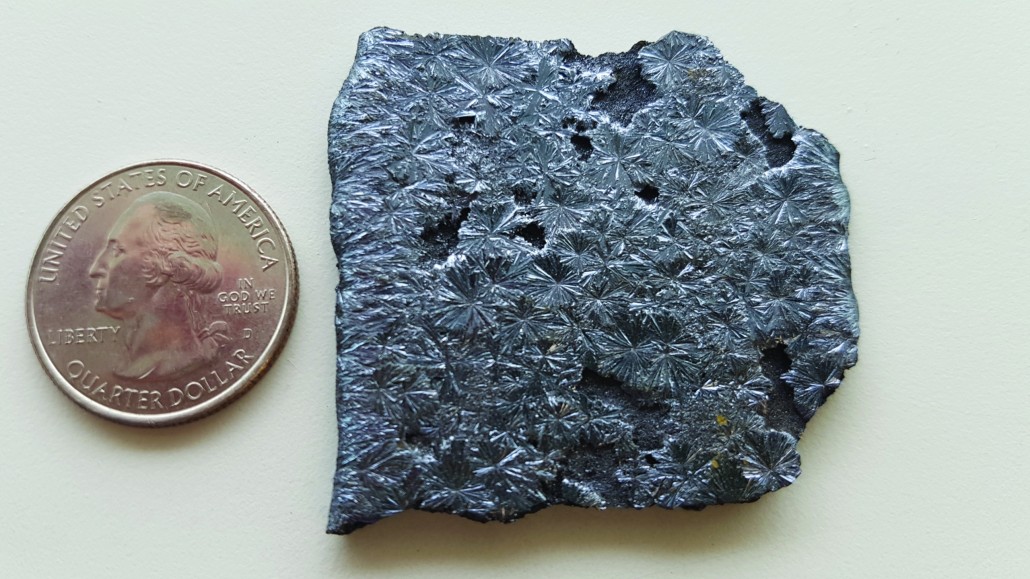 As the battery industry matures, other metals, such as manganese and graphite, may become increasingly important. Utah remains one of the most favorable exploration and mining jurisdictions in the United States, and as host to three distinct physiographic provinces (Basin and Range Province, Colorado Plateau, Middle Rocky Mountains) is prospective for a wide variety of metallic resources.

For more information on battery metal mining and potential in Utah, see the Utah mining reports and the upcoming Critical Minerals of Utah publication, which can be found through the UGS publication page.