Lying beneath our feet near the latitude of Salt Lake City is a long-lived and important east-west-trending structural zone and associated igneous and mineral belt that crosses Utah. This zone of crustal weakness allowed igneous rocks to migrate to the Earth’s surface along with important metallic mineral resources. Recognized for nearly a century, this linear crustal feature has been assigned a litany of names, including the Bingham–Park City uplift, Uinta axis, Cortez–Uinta axis, Uinta–Gold Hill trend, Uinta arch, Uinta–Cottonwood arch, Bingham–Gold Hill mineral trend, Oquirrh–Uinta mineral belt, and Oquirrh–Uinta transverse zone. The proliferation of names may be due to which part of the proverbial elephant a geologist was studying. Decades of geologic mapping and research have clarified parts of the Uinta–Tooele structural zone (UTSZ)—our preferred name.

From east to west, the UTSZ stretches across the Middle Rocky Mountain and eastern Basin and Range Provinces. The zone likely begins in northwestern Colorado, includes Utah’s Uinta Mountains (see Survey Notes, v. 50, no. 3, p. 1–3), and extends westward through the Park City and Cottonwood areas of the Wasatch Range (see Survey Notes, v. 50, no. 3, p. 4–5). Astute geologists recognized that the zone traverses across Salt Lake Valley to the Oquirrh Mountains and Bingham mining district. West of Bingham the zone continues across Tooele County and the Stansbury and Cedar Mountains (see Survey Notes, v. 49, no. 2, p. 1–3) to Gold Hill of the northern Deep Creek Range. The UTSZ likely trends into eastern Nevada (Ferber Hills and Kinsley Mountains area) where it is obscured by younger deposits and rocks and older structural features before dying out near the edge of the ancient Precambrian continent.

Geologic map of Utah between 41° and 40° north latitude showing topography and location of the Uinta–Tooele structural zone (UTSZ). The pink and red polygons along the UTSZ are the igneous centers and associated mining districts. From Hintze and others (2000), UGS Map 179DM; for explanation of map units see https://doi.org/10.34191/M-179dm

Geologists were able to piece together the story of the UTSZ using several lines of evidence as follows.

Suture in Precambrian Basement: Geologists have long recognized that Salt Lake City lies near the “sutures” of several Precambrian basement provinces. About 1.7 billion years ago (Ga) two continental blocks from the south called the Mojave and Yavapai Provinces collided with parts of the Archean (older than 2.5 Ga) North American continental core called the Wyoming Province and Grouse Creek block (with a messy younger zone between called the Farmington zone). This east-west suture zone is named the Cheyenne belt. In the Utah area, the western part of this belt became a zone of structural weakness that strongly influenced future tectonic events.

Structural Basins and Uplifts: The rocks that now make up the Uinta Mountains formed when an immense amount of Neoproterozoic-age (750 million years [Ma]) sediment from rivers collected in a failed rift (tectonic spreading center) and gradually lithified. In the later Neoproterozoic, these basin rocks were uplifted and mostly eroded prior to deposition of Cambrian-age rocks. Mapping and stratigraphic studies have shown that this structural zone appears to have been intermittently active as tectonic upwarps, including the Ordovician-age Tooele arch (Tooele County area, 465 Ma) and later as the Devonian-age Stansbury uplift (Stansbury Mountains area, 370 Ma). The tectonism is indicated by key unconformities and coarse clastic rocks. The Uinta Mountains may preserve evidence of uplift as part of the ancestral Rocky Mountains (300 Ma). Evidence also shows that much later some of the large eastward-directed thrust sheets of the Sevier orogeny were bent and rotated as they slammed into the uplifted Oquirrh and Uinta Mountains in the Cretaceous–early Tertiary (100–50 Ma) (see for example, 30′ x 60′ geologic maps of the region and specifically the Mt. Raymond thrust area depicted on the Park City West quadrangle, UGS OFR- 697DM). As deformation proceeded eastward during the Laramide orogeny (70–35 Ma), the Uinta Mountains were uplifted again as evidenced by thinning in Mesozoic rocks, forming the mountains we love today. More recent tectonic activity may be associated with Tertiary extension and lowering of the eastern Uinta Mountains (25 Ma to present).

Igneous Activity: Crustal weakness in the UTSZ was a conduit for igneous rocks. Although intrusive igneous rocks are rare in the Uinta Mountains, a number of intrusive centers occur westward along the linear trend. The Park City porphyries, Park Premier porphyry, and Indian Hollow plug are in the Park City area. Farther west, the Alta, Clayton Peak, and Little Cottonwood stocks are in the Wasatch Range. The Bingham and Last Chance stocks are in the Oquirrh Mountains. Stockton has the Spring Gulch and Soldier Canyon stocks. South Mountain contains a few small basaltic dikes. The Stansbury Mountains have small rhyolitic intrusions and rhyolitic to intermediate extrusive rocks. The Cedar Mountains have rhyolitic to intermediate extrusive rocks and a small rhyolitic plug. An Eocene intrusion occurs at Gold Hill, along with an older Jurassic-age stock. Quartz monzonite stocks are noted in the Ferber-Kinsley area of eastern Nevada. These igneous rocks are associated with the wave of volcanism that swept north to south through Utah in Eocene to Oligocene time (about 40 to 23 Ma). Associated with the intrusives are the major mining districts of Park City (metal resources of silver, lead, gold, zinc) and Bingham (copper, gold, molybdenum), as well as the smaller districts of Big and Little Cottonwood (silver, lead), American Fork (gold, lead, silver), Stockton (lead, silver, gold, zinc), Gold Hill (arsenic, gold, silver), and several others.

Geophysical Data: In further support of the influence of the UTSZ, an alignment of magnetic rocks associated with the UTSZ is shown through aeromagnetic geophysical data obtained by airplane. This alignment is indicated by a patchy narrow magnetic high with several individual smaller highs, some elongated, that overlie exposed intrusive igneous rocks or postulated buried intrusive masses.

Topography: The UTSZ is readily apparent as the elevated spine of the Uinta Mountains, with numerous peaks exceeding 13,000 feet, one of the few east-west-oriented ranges in Utah. The zone continues through the Cottonwood area of the Wasatch Range (10,000–11,000-foot peaks). In the Basin and Range it follows elevated points of the Oquirrh and Stansbury Mountains (10,000–11,000- foot peaks) and crosses the dogleg of the lower-elevation Cedar Mountains and northernmost Deep Creek Range. 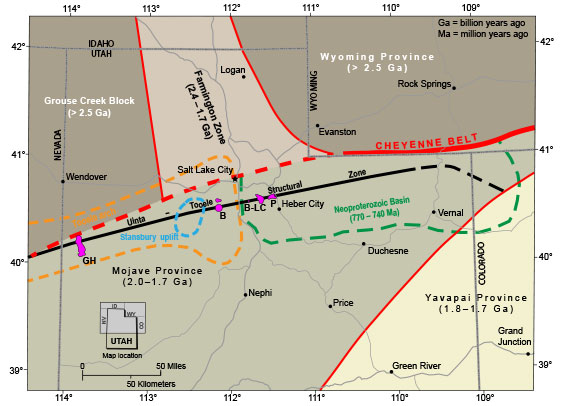 Precambrian basement provinces across northern Utah (note sedimentary cover rocks and surficial deposits are stripped away). Younger provinces (Mojave and Yavapi) were accreted (sutured) to the older continental core (Wyoming Province and Grouse Creek Block) across the Cheyenne Belt and a poorly defined westward extension through Salt Lake City. The resulting Uinta–Tooele structural zone (UTSZ) lies along this ancient area of weakness. The Farmington zone represents complications in the Precambrian accretionary tectonics of this area. The eastern part of the UTSZ contained a Neoproterozoic basin that was uplifted in the later Neoproterozoic and again in the late Paleozoic and early to middle Tertiary. The western part of the UTSZ contained uplifts called the Tooele arch and the Stansbury uplift, and igneous intrusions and related mining districts including Gold Hill (GH), Bingham (B), Big and Little Cottonwood (B-LC), and Park City (P).

The Uinta–Tooele structural zone, previously known by several names, impacted the northern Utah area in several ways. Together, lines of evidence point to the existence of a substantial, weak, linear crustal feature that has been intermittently active over about 2 billion years of geologic time. This structural zone has been the location for both uplifts and basins. Key metallic mineral resources are associated with igneous rock masses brought to the Earth’s surface through this zone of crustal weakness. Ongoing work by UGS and other geologists is helping to clarify the story of the UTSZ. This work provides insights into the area’s geologic history and occurrence of valuable mineral resources.