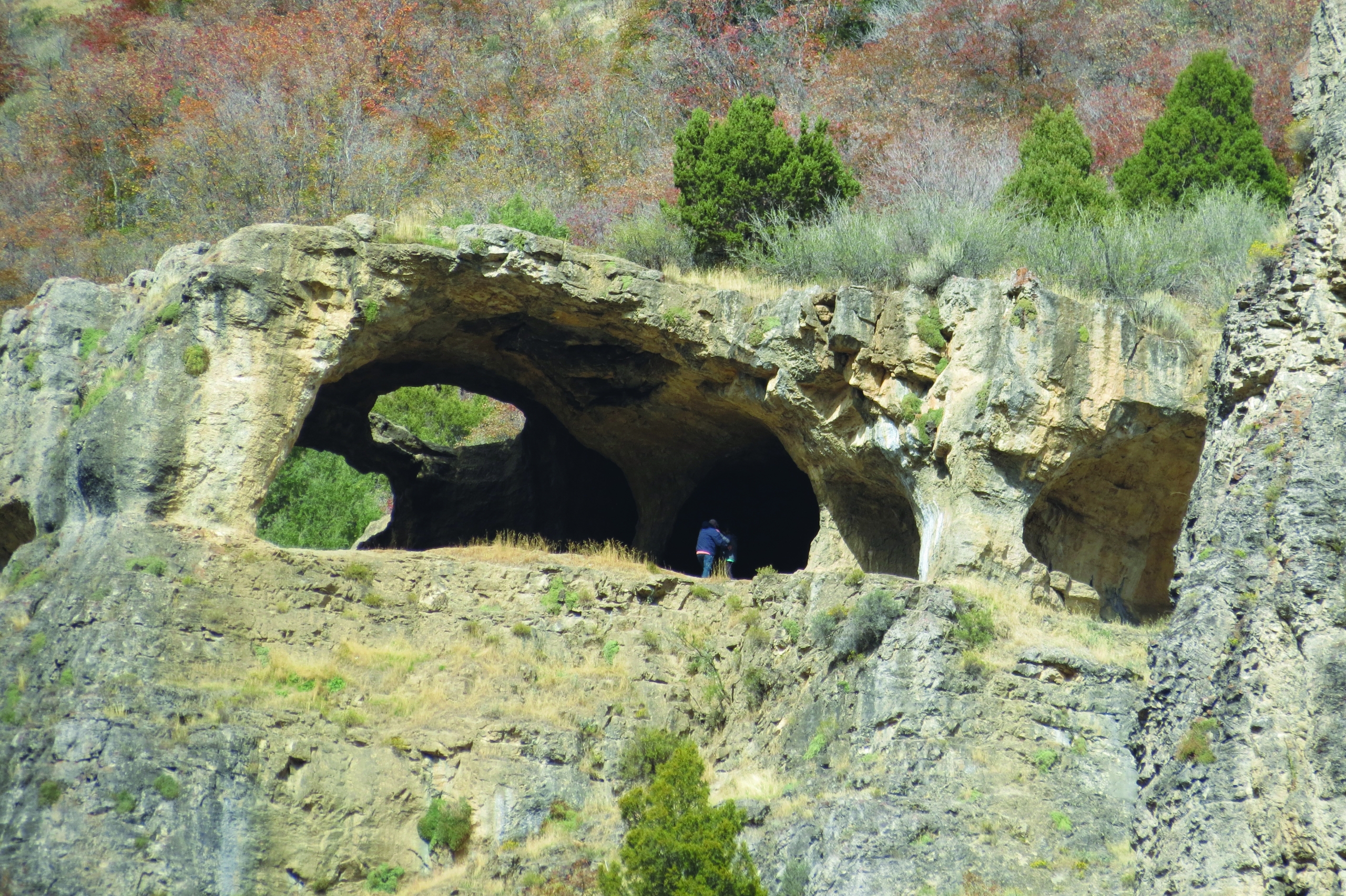 Wind Cave, considered an arch, has a “skylight” in the roof. Note person inside cave for scale. View to the northwest.

Contrary to its name, Wind Cave (sometimes Caves) was formed by water, not wind. This popular hiking destination, also referred to as the Witch’s Castle, is in Logan Canyon just east of the city of Logan in Cache County. The cave developed below ground over thousands of years before being exposed along the north side of the canyon. The hiking trail meanders through rocks of the Lodgepole Limestone to where the cave is exposed mid-mountain. A brief journey through the geologic history of the
area will shed light on the creation of this wellknown landform.

The Early Mississippian-age Lodgepole Limestone is a gray, cliff-forming, fossiliferous limestone deposited about 350 million years ago. During this time, Utah was covered by a warm tropical sea and limestone deposition was ubiquitous across the state. Northern Utah was the site of a shallow marine platform home to various creatures like horn coral, crinoids, and brachiopods that are now fossilized in the Lodgepole Limestone. 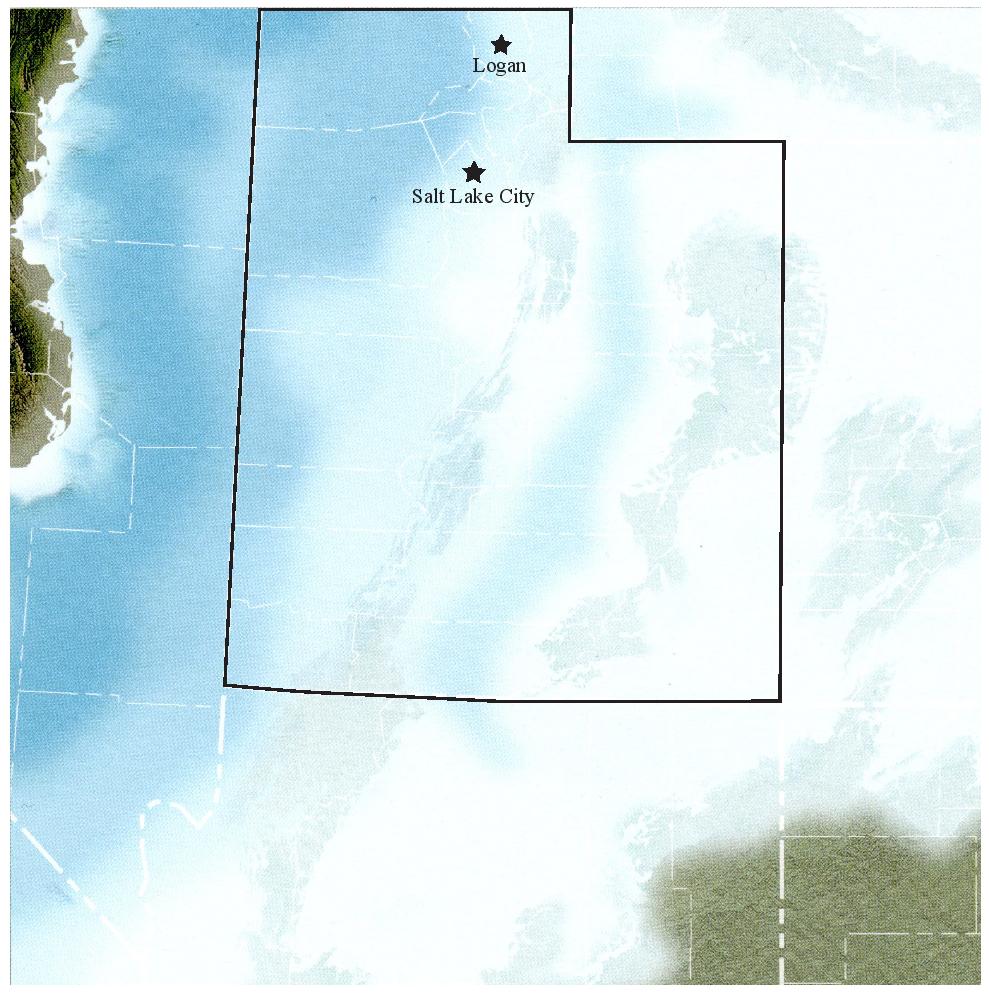 Paleogeographic map of Utah during the Early Mississippian when most of Utah was covered by a warm, shallow sea. map modified from Ancient Landscapes of the Colorado Plateau by Ron Blakey and Wayne Ranney).

Long after deposition, burial, and cementation of the Lodgepole, the area underwent tectonic compressional events resulting from the subduction of the Farallon plate (made of thin oceanic crust) beneath the western margin of the North American plate (made of thick continental crust). The Sevier orogeny (i.e., mountain building event), which began in the Middle Jurassic (about 170 million years ago [Ma]) and lasted into the Eocene (about 40 Ma), deformed and moved Paleozoic through Late Cretaceous-age strata in northern Utah over 30 miles eastward along thrust faults. Rocks in northeastern Utah were further deformed during the Laramide orogeny, beginning in the Late Cretaceous (about 70 Ma) and lasting into the Oligocene epoch (about 20 Ma), which overlapped with the late stages of the Sevier orogeny (for more information on the Sevier and Laramide orogenies see Survey Notes, v. 32, no. 1, p. 1–4).

At the future site of Wind Cave, the Lodgepole Limestone and strata above and below were gently uplifted and folded into the broad Logan Peak syncline (trough), the axis of which trends roughly north to south, parallel to the western front of the Bear River Range. When the long-lasting compressional forces abated, the area underwent a westward-directed “relaxation,” or extension, accommodated by normal faults. This extension caused the crust to “pull apart” resulting in the development of the Basin and Range Province, which is characterized by the repeating ranges and valleys present in the western U.S. today. The Bear River Range, bounded on the west by the East Cache fault zone, began to uplift relative to Cache Valley during this extensional event that started approximately 17 Ma.

Through a combination of tectonic uplift and erosion of overlying strata, the Lodgepole Limestone ended up at shallow depths below the ground surface where it could interact with groundwater, which can dissolve limestone. As rain falls, it absorbs carbon dioxide from the air and as it percolates into the ground, it mixes with carbon in the soil creating carbonic acid, a weak acid. The carbonic acid slowly dissolves the limestone along joints and fractures and between bedding planes. Given enough time, large caverns can form. Once the water table drops below the level of the cavern, stalactites and stalagmites can begin to grow. These speleothems can be dated to gain an idea of when a cave formed.

Exhumation of Wind Cave.
A – The cave develops slowly below the water table (area below dashed blue line) where the rock interacts with flowing groundwater (blue arrows).
B – The Logan River erodes down into the valley and the water table lowers.
C – Erosion of the canyon walls keeps time with incision of the river and the cave is gradually exposed.

Although no speleothems are preserved in Wind Cave, a speleothem from a nearby cave in the Tony Grove area was dated at 100,000 years old. Because speleothems develop in a cavern open to air, the caves around Tony Grove, and likely Wind Cave, were above the water table 100,000 years ago and therefore began to form prior to that time. Exhumation and exposure of Wind Cave occurred gradually as the Logan River incised into the canyon and the canyon walls eroded. 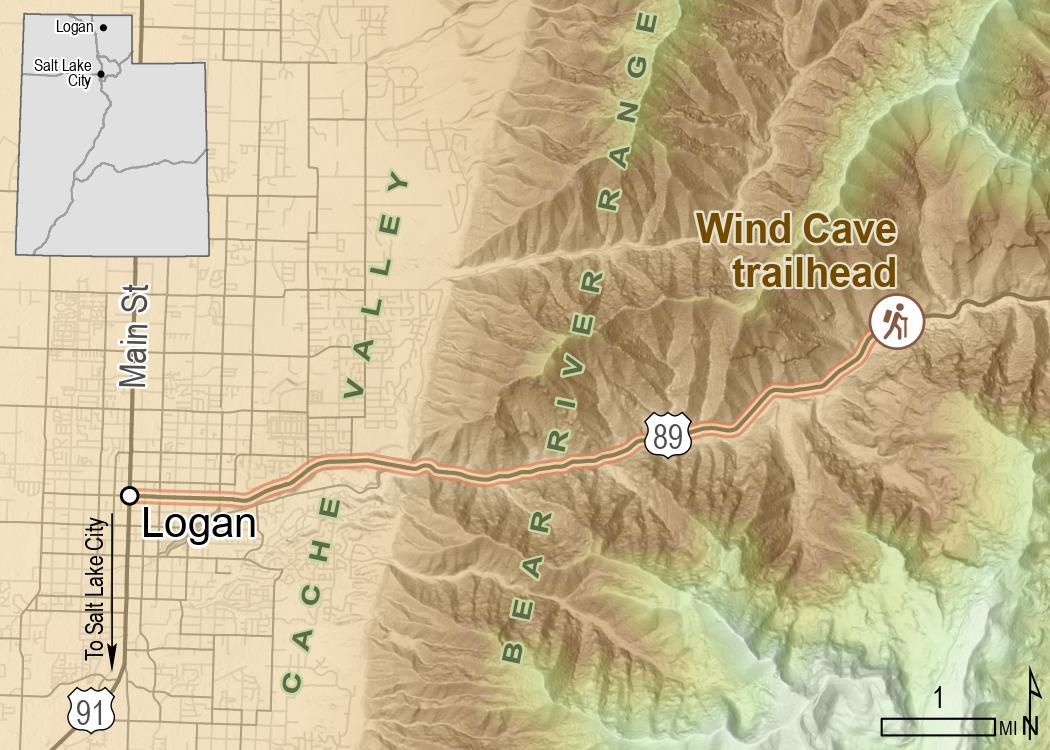 From Main Street in Logan, Utah, head east into Logan Canyon on 400 North/U.S. Route 89 for about 7.5 miles. Turn left into the Wind Cave trailhead parking area on the north side of the highway. The trail is 1.8 miles to the cave and gains about 1,000 feet elevation. The climb is moderate to very steep in places and has limited shade. Sturdy walking shoes are essential as are water and sun protection. There are no restrooms at the trailhead, but the Guinavah-Malibu Campground, directly south across the highway, has flush toilets. Dogs are allowed on the trail but must be kept on a leash. The trail is open all year, but is best accessed in March through November.