What gemstone is found in Utah that is rarer than diamond and more valuable than gold? 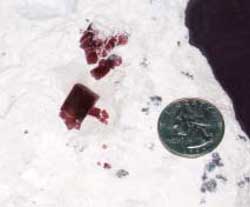 Specimen of red beryl from the Ruby-Violet claims in the Wah Wah Mountains. U.S. quarter for scale.

The gemstone has several different names: red beryl, red emerald, or bixbite. Originally, the mineral was named bixbite, but now red beryl is the most accepted designation. Red beryl is estimated to be worth 1,000 times more than gold and is so rare that one red beryl crystal is found for every 150,000 diamonds.

In 1904, Maynard Bixby discovered red beryl in the Thomas Range located in Juab County, Utah. Bixby thought it might be a new variety of beryl, but the raspberry- red color did not correlate with any beryl known to exist at that time (green, blue, pink, yellow, and clear/white). W.F. Hillebrand, a geochemist from the National College in Washington, D.C., identified the mineral as a new type of beryl in 1905.

In 1912, Dr. A. Eppler named it bixbite in honor of its discoverer. Laboratory analysis showed that manganese and small amounts of iron, chromium, and calcium create the raspberry-red color of red beryl. Like other beryl, red beryl has a hardness of 7.5 to 8.0 and its chemical composition is Be3Al2Si6O18.

Red beryl formation began with the eruption of a topaz rhyolite lava from volcanic vents. As the lava began to cool, shrinkage cracks formed, creating pathways for hightemperature gases rich in beryllium to escape. Oxidized surface water also began seeping into these cracks and mixed with the rising beryllium gases. The gases reacted with the surface water, silica, alkali feldspar, and ironmanganese oxides from the lava to form red beryl crystals.

Red beryl probably grew at temperatures between 300 to 650 degrees Celsius. Red beryl is presently found at only three locations in the world: the Thomas Range and the Wah Wah Mountains in west-central Utah, and the Black Range in New Mexico.

In the Thomas Range, red beryl occurs primarily as short, flat, hexagonal crystals or more rarely as elongated, barrelshaped crystals. The crystals are generally up to 2 –10 mm long and 4 – 6 mm thick. Many of these crystals are too small to be faceted. They are found in cavities and fractures within the Topaz Mountain rhyolite that erupted approximately 6 to 7 million years ago from volcanic vents in the area.

Small crystals can be found in an area called “the Cove,” where they may be attached to other minerals such as topaz, bixbyite, garnet, pseudobrookite, or hematite. Larger crystals that have been faceted into gemstones have been found in the northwest part of the Thomas Range near Wildhorse Springs.

The only known deposit of large, gem-quality red beryl in the world is from the Ruby-Violet claims in the Wah Wah Mountains of Beaver County, Utah. These are private claims and no collecting is allowed without permission from the present claim owners.

The crystals occur primarily as elongated hexagonal crystals that are up to 15 mm in length, and the largest crystal discovered to date is 14 mm wide and 34 mm long. Red beryl is generally found along large, near-vertical, northwest-trending fractures and clay-filled seams within the rhyolite member of the Blawn Formation. The rhyolite erupted approximately 18 to 20 million years ago from volcanic vents in the area.

The property has periodically been worked and continues to produce nice mineral specimens and stones suitable for faceting. Red beryl crystals from this location that have been faceted sell for an average of $2,000 per carat. For comparison, gold is currently worth $300 to $320 per ounce (one ounce is equal to 155 carats). [2002 prices]

For more information regarding red beryl, contact the Natural Resources Map & Bookstore – (801) 537-3320, or toll free at 1 (888) UTAHMAP. The bookstore has several rock and mineral publications available for purchase that describe areas where to collect red beryl.