Glad You Asked! How does Plate Tectonics make for Great Skiing? 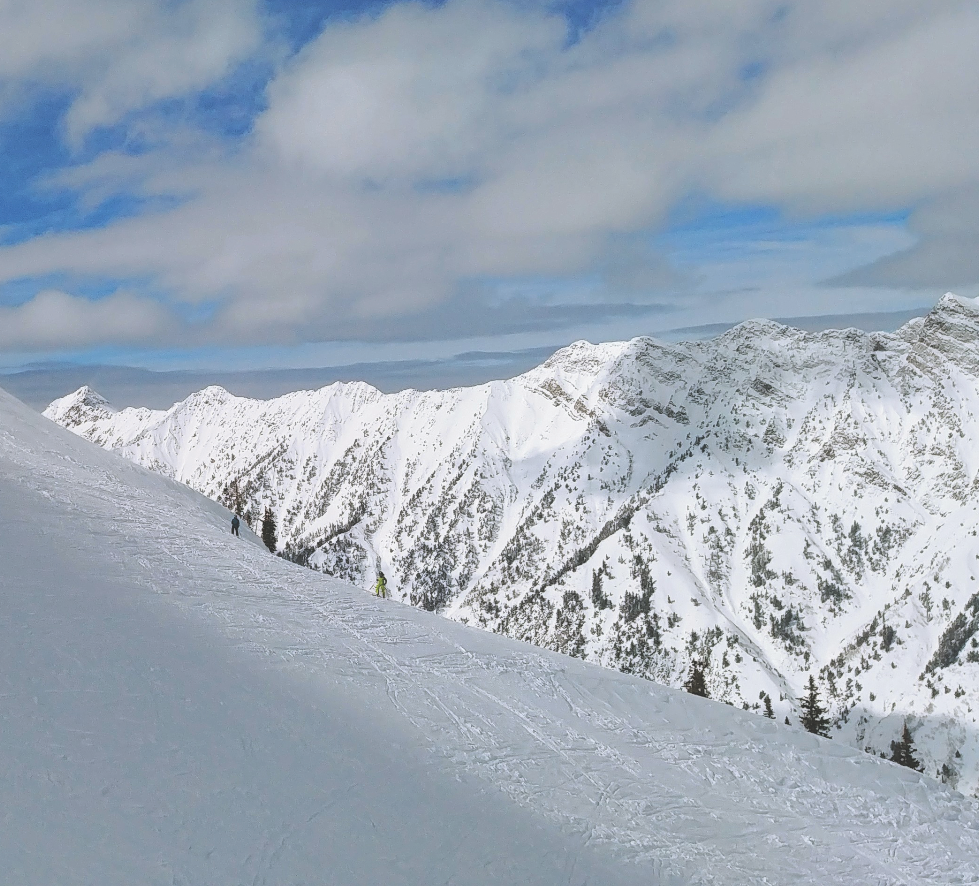 View from south side of Little Cottonwood Canyon looking northwest. Note skiers at ridge in foreground. The north side of the canyon exhibits the Little Cottonwood stock (~30 million years old), a magma intrusion, in contact with the Big Cottonwood Formation (~900 million years old). The stock intruded into the crust and cooled about 6 miles below the ground surface. The Big Cottonwood Formation is post-rifting in age, after the Wasatch hingeline was established, and is made up of sediment brought from rivers from eastern parts of the continent. Photo courtesy of Mark Milligan.

Great snow and great skiing and snowboarding are ultimately the result of plate tectonics. Plate tectonic activity, the relative movement of independent pieces of Earth’s exterior shell, involves the Earth’s plates migrating (changing their relative position), splitting apart (allowing new crust to form where magma wells up), and colliding with each other (destroying old crust in subduction zones). This activity creates the planet’s mountain ranges, volcanic chains, rift valleys, and ocean basins, ridges, and trenches. Snow conditions are a sum of topography, elevation, latitude, and distance to the ocean. These factors constrain climate and are shaped by a history of tectonics. Mountains govern the first two factors and all four factors govern snow—its quantity, quality, and duration.

TECTONIC HISTORY
Utah’s ski resorts are located along the Wasatch hingeline, a northeast to southwest band of mountains that arcs through central Utah. The hingeline’s origins stretch back nearly a billion years before the “Greatest Snow on Earth®.” Once formed, the hingeline perpetuated an east-west division in Utah through geologic time. The hingeline commenced with the break-up of the supercontinent Rodinia. The land rifted (split apart) along the hingeline, fragmenting the landmass and allowing oceanic crust to form in the gap. As the rift widened, the region west of the hingeline subsided for a long period of time, ocean waters encroached, and Utah was at the edge of the continent.
Hundreds of millions of years of quiescence followed, with tropical beaches, coral-filled seas, mud flats, lakes, broad river plains, and vast expanses of sand dunes. Stream networks drained much of the continent through Utah to the western ocean. Then plate tectonic activity resumed with the break-up of the supercontinent Pangea. The Farallon Plate began subducting beneath the continent, forming a convergent plate boundary. By Middle Jurassic time, around 170 million years ago, volcanism began in western Utah and 70 million years later mountain building ramped up from compression from the west. West of and at the Wasatch hingeline, the crust thickened and mountains formed from thrust sheets—large bodies of rock shoved eastward and folded. Intense volcanism ensued over much of the state. Throughout this mountain building time, Utah became steadily more distant from the western ocean.
After a time the remains of these mountains underwent the next and current stage of tectonics. Basin and Range extension is stretching and thinning Earth’s crust from the Wasatch hingeline to the Sierra Nevada. This deformation produced faulting that created long and repeating mountain ranges and valleys. Vertical movement on the Wasatch fault has resulted in the Wasatch Range abruptly rising thousands of feet above the adjacent valleys.
Yet how does this tectonic history make for favorable skiing and snowboarding? Here are a few factors that make skiing great in Utah, with focus on the central Wasatch Range and how plate tectonics fits in.

Structures such as faults, folds, and thrust sheets from prior mountain building episodes add attributes to the landscape and can be viewed from ski resorts, even under the snow cover of winter. The Hellgate Cliffs opposite the Snowbird resort exhibit a thrust fault where compressional forces from the west shoved rock eastward. The cliffs are a Mississippian-age limestone capped with older Mineral Fork Tillite and Tintic Quartzite. Photo courtesy of Mark Milligan.

SNOW COVER THROUGH THE SEASON
Tectonic plate migration has taken Utah from the equatorial latitudes and landed it squarely in the mid-latitudes. In this zone extratropical cyclones, weather systems some thousand miles across, pass intermittently from the Pacific Ocean to the Rocky Mountains, delivering blizzards. In a normal year, frontal storms through the winter and spring bring fresh snow to the mountains every week or two. Abundant spring storms can extend the ski season until early summer for some resorts. High elevation keeps temperatures cold and precipitation frozen late into the year.

ACCESS TO SLOPES
The Wasatch fault has produced steep mountains without foothills. The physiography was beneficial for settlement and subsequent growth of the Wasatch Front urban corridor, a long, narrow strip of populated area where more than two million people now reside. The valleys have fertile soils and a long growing season with hot summers. The adjacent mountains provided timber, rangeland, metallic resources, and winter snowpack as a source of water for irrigation of valley crops. Consequently, an extensive metropolitan area is now located within minutes of the mountains. Nine premier ski resorts are within a one-hour drive of Salt Lake City.

TEMPERATURE RANGE
Skiers and snowboarders prefer that snow not melt or that temperatures are not too cold for comfort. Temperature is largely a function of latitude and elevation. The Cottonwood Canyon resorts, at 8,000 to 11,000 feet above sea level, have daily high temperatures in the winter months around 31°F, and daily lows around 9° to 14°F. Although the valleys are not much warmer in the winter than the mountains, springtime offers the opportunity to ski and bike on the same day. 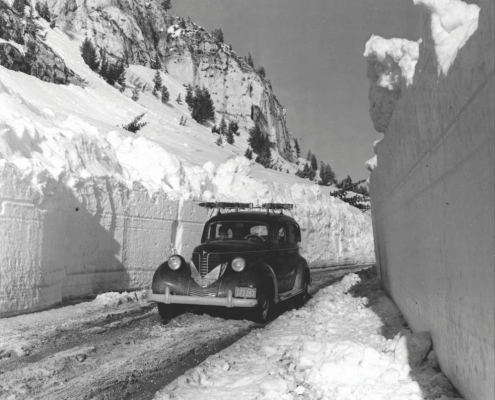 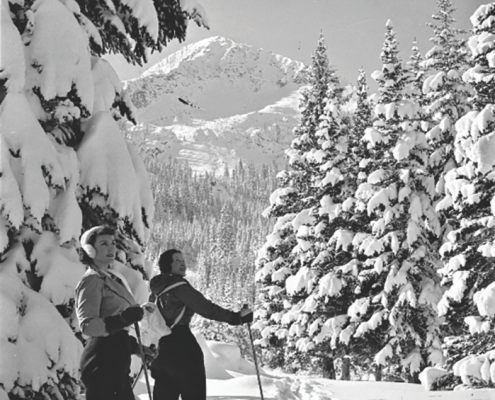 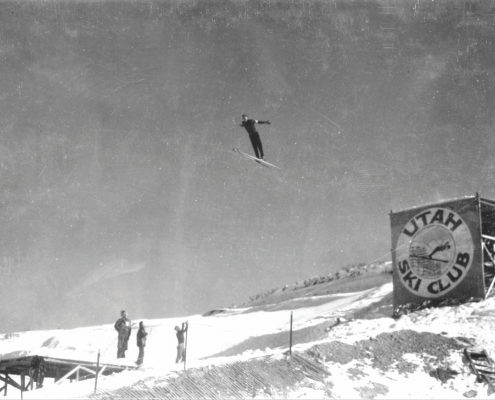 HIGH-QUALITY SNOW
Utah’s interior position and the presence of numerous mountain ranges between the state and the ocean make for quality snow. Utah is about 600 miles or more from the ocean. Storms driven by the prevailing Westerlies from the Pacific Ocean must track perpendicular across the Sierra Nevada or Cascade Range, then across a washboard pattern of Basin and Range mountains. Along the way, these storms drop a significant amount of their original moisture as precipitation so that Pacific air masses arrive in Utah relatively dry. Along with bitterly cold temperatures aloft due to elevation and interior location, these relatively dry storms produce a variety of snowflakes—columns, plates, needles and dendrites—typically having a moderately low density. Alta snow density averages 7.8 percent December through January and 8.5 percent for the whole snow year.

ABUNDANT SNOW
Western Utah’s Great Salt Lake Desert receives as little as five inches of precipitation a year, whereas areas of the Wasatch Range average ten times as much precipitation, with hundreds of inches of winter snow. The upper Cottonwood Canyons are among the snowiest locations on Earth. Alta and Brighton have the 4th and 10th highest average annual snowfalls, respectively, in the United States. The steep relief of the Wasatch Range induces orographic lifting—air is forced to rise up and over the range. As air rises, it expands, cools, and its relative humidity increases leading to precipitation. Great Salt Lake, averaging 1,700 square miles and never freezing over, influences local weather. The lake is a product of Basin and Range tectonics and is the most prominent of the lakes of the Great Basin—the northern and internally drained area of the Basin and Range Province. Following the passage of a cold front, lake effect snow shower bands can stretch from the lake to the south, southeast, and east across the valleys and into the mountains, boosting snowfall.

VARYING TERRAIN AND BEAUTIFUL SCENERY
Latitude and elevation contributed to modest glacial growth in the Wasatch Range in the past. Recurring ice ages in the Quaternary Period, the last one peaking around 20,000 years ago, triggered alpine glaciation in Utah’s mountains. Glaciers begin growing in the shade of the highest summits, etching out bowl-like amphitheaters and sculpting pointed peaks and jagged ridges. The streams of ice then course downslope, carving U-shaped canyons and hanging valleys from tributary glaciers. The result is ski areas with variable topography—both abrupt and gentle—and vertical relief that locally exceeds 3,000 feet.

Although glaciers have provided the finishing touches on the landscape, a composite of tectonic events have left their imprint on the Wasatch Range. Overthrust faulting, intrusions of igneous rock (plutons), and folds can be viewed and appreciated from resorts. Rock outcrops exhibit diverse chapters of tectonic history, including gneiss, schist, and quartzite from ancient continental crust, marine limestone and sandstone from the former edge of the continent, conglomerates shed from eroding mountains, and granite and tuff from volcanic activity.