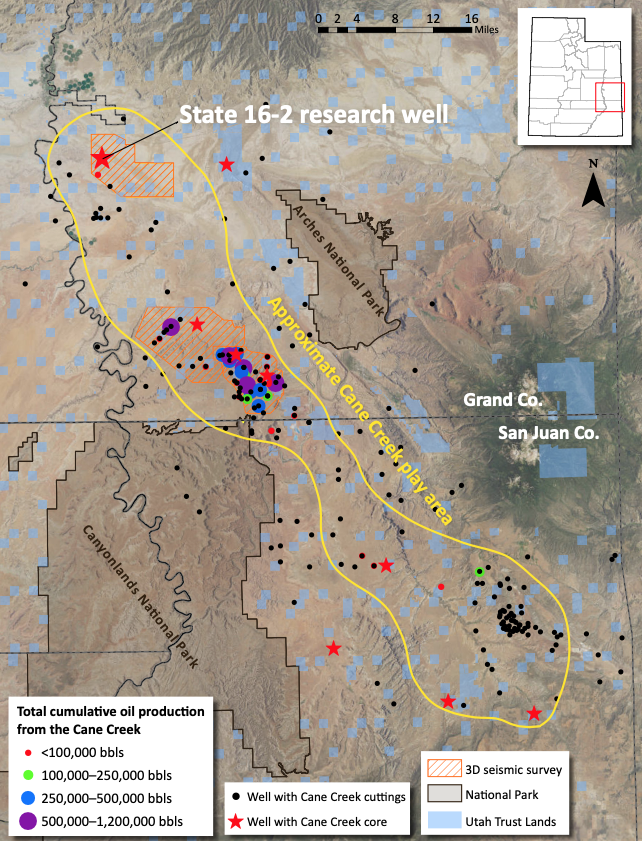 The Cane Creek interval within the Pennsylvanian-age Paradox Formation of the northern Paradox Basin, southeastern Utah, is touted by some as one of the last remaining emerging unconventional tight oil plays in the United States, with wells capable of producing up to 1,500 barrels of oil per day (initial production). However, the drilling history of the Cane Creek play has been fraught with challenges and disappointment. Nearly 100 years ago, one of the very first wells that targeted Paradox Formation reservoirs “blew-out”—the rig caught fire and was destroyed, a sinister omen for this troublesome target. Drilling activity increased in the 1950s and 1960s with the discovery of hydrocarbons in the underlying Leadville Formation. While drilling to the Leadville, several vertical wells encountered hydrocarbon shows in the overlying Cane Creek interval. In 1962, Long Canyon 1 was the first well to establish commercial production from the Cane Creek and has produced over one million barrels of oil (and is still producing). Despite the promise of the Long Canyon 1 well, it would not be until the early 1990s that significant exploration activity in the Cane Creek resumed; petroleum prospectors came armed with a new technology in the horizontal well. Although these new wells showed promise in the central part of the play, the prize of massive, play-wide production remained elusive. Fast forward two decades and armed with more advanced horizontal drilling technology plus new seismic data, the oil company Fidelity (which no longer exists) drilled several new wells around the central play area. Some of the new Fidelity horizontal wells were quite successful, but others were not. With the crash in oil prices in early 2015, the industry once again stepped back from this troublesome play to reevaluate and ask some fundamental questions. Can the mysteries of the Cane Creek be solved? Can the drilling challenges be overcome? Can the Cane Creek prove to be a commercially successful tight oil play?

As a way to help move the Cane Creek play needle in the direction of success, the U.S. Department of Energy (DOE) has awarded $8 million in federal funding to the Energy & Geoscience Institute (EGI) at the University of Utah and the Utah Geological Survey (UGS) to develop the tools and strategies necessary to more completely tap into this underutilized resource, while at the same time minimizing impact. The five-year project will utilize up to $3 million in state and private/industry cost-share funds to help accomplish its objectives.

Numerous factors currently impede the full production potential of the Paradox unconventional oil play. Current experience indicates that the Cane Creek can be a very successful fracture play, meaning the intersection of natural fractures with the wellbore can generate economic production (no hydraulic fracturing needed). However, the clastic (sandstone/shale/anhydrite) target zones are interbedded with several hundred feet of mechanically ductile salt layers. Over time, through the natural burial process, overburden pressure and regional stress regimes have caused the salt layers to flow like toothpaste, creating significant macro- and micro-structures within the reservoir zones. These heterogeneous structures make it difficult to predict natural fracture networks, fracture orientations, and subsequent horizontal well paths.

Typical unconventional plays, such as in the Permian Basin of West Texas or the Williston Basin in North Dakota, are targeted with horizontal wells that are then hydraulically fractured to open pathways for hydrocarbons to travel to the wellbore (as opposed to targeting natural fractures). Could the Cane Creek be targeted in a similar way, basically bypassing the hunt for natural fractures, and instead artificially create them via hydraulic fracturing? The challenge in the Cane Creek is the limited thickness of the clastic zones, often only about 100 feet or less, and their bounding by salt. Typical hydraulic fracturing techniques would send fractures into the over-and underlying salt layers, which would mobilize the salt and clog any existing or created fractures, shutting down production.

The objectives of this research project aim to help solve these dueling scenarios. The project team will leverage large back-catalogues of publicly available and proprietary data—including rock cores, geophysical logs, and 3D seismic—to develop new geologic and geomechanical models that will help with natural fracture prediction and optimal well placement. At the same time, experiments will be conducted to refine novel stimulation techniques (e.g., hydraulic fracturing) that could be used in areas without natural fractures and that will avoid interaction with the salt. 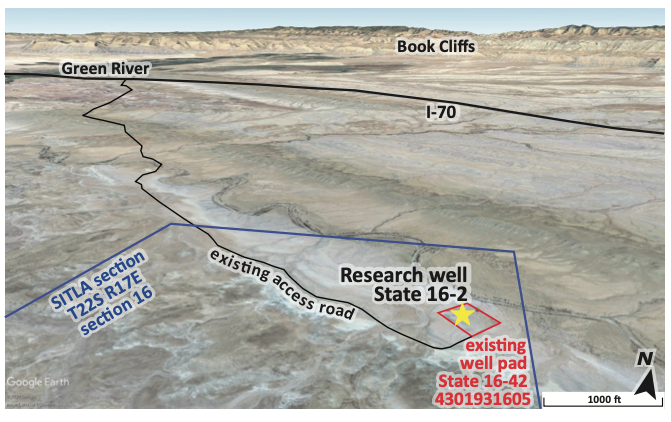 One major step forward for this project will take place in late fall 2020 (this article was written before the well was drilled). The project team is partnering with Zephyr Energy to drill a scientific research well in the northern part of the play area, not far from the town of Green River, Utah. This exciting partnership creates a win-win situation for both the project team and the company. Zephyr Energy and their very experienced team of geologists and engineers will be the owner/operator of the well. The project team will assist Zephyr Energy with logistics, planning, and the acquisition of the scientific data from the research well. Two-thirds of the well cost will be paid by DOE funds, while up to one-third will be cost-share expenses paid by Zephyr. The project team can also take full advantage of Zephyr’s already-collected exceptional 3D seismic survey collected in the area surrounding the research well to greatly reduce drilling risks (e.g., the well location was chosen to specifically avoid subsurface faults, the presence of which would not have been known without the 3D seismic data). The research well will also act as an important ground truth to further calibrate the seismic interpretations. 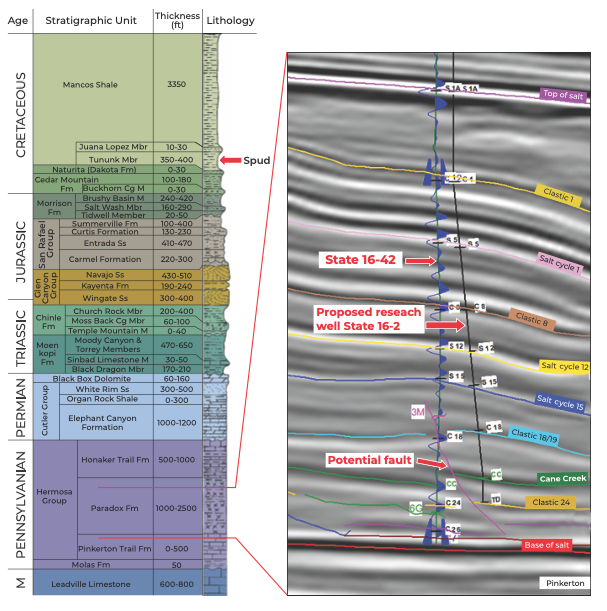 The State 16-2 research well will “spud” in the Tununk Member of the Mancos Shale and drill down about 9,700 feet to the base of the Paradox Formation. The cross-section on the right shows an image from the 3D seismic survey and provides a detailed glimpse into the subsurface, vital for well planning and drilling (lithologic column from Hintze and Kowallis, 2009).

The research well, named State 16-2, will be drilled on the existing well pad used for the State 16-42 well, which was drilled in 2009, thereby eliminating the need for further land disturbance. This well is also located on a section of land owned by the Utah School and Institutional Trust Lands Administration. The well will “spud” (start of drilling) in the surface-outcropping Cretaceous-age Tununk Member of the Mancos Shale and will be drilled to a depth of approximately 9,700 feet, through Jurassic, Triassic, Permian, and Pennsylvanian deposits, in order to collect 100 feet of rock core from the Cane Creek interval in the lower Paradox Formation. In addition, the team will drill and collect sidewall cores (small core plugs, 1.5 by 3 inches in size, drilled from the side of the well bore with a special downhole drilling tool) from several of the overlying clastic zones that show petroleum production potential. This research well will provide geologists their first look at actual rock from the Cane Creek in the northern part of this play and will be the first time rock is collected from the other clastic zones. This information will fill important information gaps in our understanding of the geology of the area, the maturity of the source rocks, and the natural fractures. Finally, the team will collect additional petrophysical data via sophisticated downhole geophysical logs, including advanced borehole imaging tools. After the drilling is complete and all data have been gathered, the well will be temporarily abandoned in the hope that Zephyr can re-use a portion of the well bore to drill a horizontal test well in the Cane Creek at some point in the future.

The Cane Creek play has experienced some success over the years, with production totaling over 10 million barrels of oil since the first wells were drilled. However, there is an estimated 1.2 billion barrels of potential oil (barrels of oil equivalent, which includes natural gas) in the Cane Creek, meaning that 99.2 percent of the oil in the Cane Creek remains in-place. These numbers do not include all the other overlying clastic zones that also have petroleum production potential. So far, the challenges of this play have overshadowed the significant successes. This DOE-funded project seeks to provide multiple paths forward for the development of a commercially successful tight oil play (Cane Creek and other clastic zones) by reducing drilling risks and uncertainty.

For more information, visit the project website at http://paradox.unconventional.rocks. 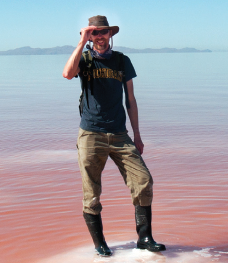 Michael Vanden Berg has worked for the Utah Geological Survey for 17 years and is currently the Energy and Minerals Program Manager.  In addition to his managerial duties, Michael researches the lacustrine deposits of the Green River Formation, including their hydrocarbon potential, as well as modern lacustrine systems such as Great Salt Lake.  Michael is also co-PI of the DOE-funded Cane Creek project.