by Andrew Rupke and Elliot Jagniecki 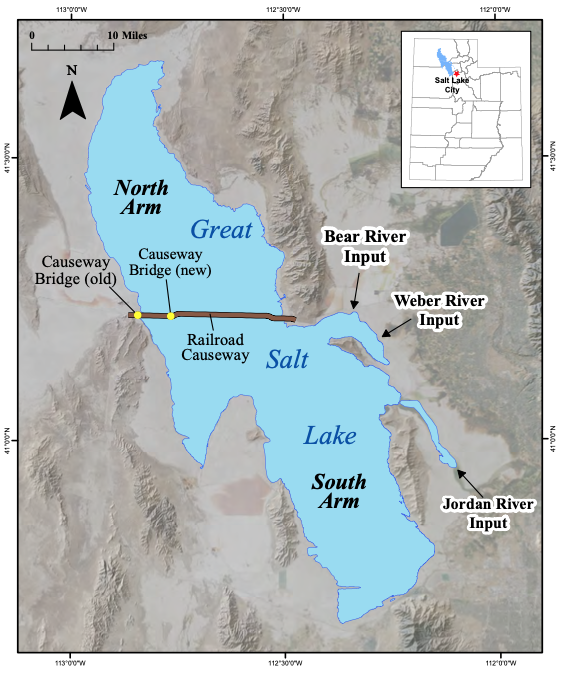 Yes, Great Salt Lake is salty, but some parts of the lake are saltier than others. Human activity has altered the natural environment of Great Salt Lake, with the most noteworthy modification being the roughly 20-mile-long railroad causeway that separates the lake into north and south arms. The causeway, in its current form, is primarily constructed of rock and only allows limited water flow between the two arms of the lake. This constriction of flow, as well as the fact that the rivers delivering fresh water to the lake only enter the south arm, has caused the north arm of the lake to become much saltier than the south arm.

Water flows through the causeway primarily via two bridge openings. The bridges are located on the west side of the causeway and are about 4 miles apart. The eastern bridge is relatively new and was constructed to replace the flow of two culverts that were closed in 2012 and 2013 due to structural integrity issues. The new bridge, opened in December 2016, was built with a control berm on the north side of the causeway that can be modified to control and change water flow through the opening. With this new ability to adjust flow between the two arms of the lake, the Utah Division of Forestry, Fire and State Lands and the Utah Department of Environmental Quality (both of which are charged with managing Great Salt Lake) are seeking to understand how salt cycles through the lake system and how salinity is affected by water flow through the causeway openings. Salinity levels are important because they affect the lake’s ecosystem and the viability of the lake’s mineral industry. For example, brine shrimp thrive within certain salinity thresholds and declining salinity in the south arm of the lake has been a concern for mineral producers operating in that part of the lake.

Since the completion of the railroad causeway in 1959, the north arm of Great Salt Lake has typically been at or near saturation with respect to halite, the mineral form of sodium chloride (with the exception of a high water period during the 1980s and early 1990s). In other words, water in the north arm is often at a state where it cannot hold any more dissolved salt so solid salt forms (or precipitates) from the water. In fact, past research by the Utah Geological Survey (UGS) and others has shown that a salt (or halite) crust is often present on the floor of the north arm and can be several feet thick in some areas. However, the extent and thickness of the salt crust varies due to changes in north arm salinity brought about by lake level changes, changes in flow through the causeway, and seasonality. The salt crust is an important salinity control for the entire lake system because it stores salt that might otherwise be in solution (or dissolved) and able to move into the less saline south arm. In the years preceding the new bridge opening in late 2016, the north arm was often saturated with respect to halite and an extensive salt crust formed, particularly during the dry months of late summer and early fall when evaporation is high. However, following the bridge opening, a large amount of fresher south arm water flowed into the north arm, thereby lowering its salinity. This large influx of water from south to north was, in part, due to the south arm lake level being several feet higher than the north arm at the time of opening, but this difference has since reduced to only about a half a foot. In the first couple of years following the new bridge opening, only minor salt precipitation occurred in the north arm and most of the nearshore salt crust dissolved. In 2019, the UGS began a concerted research effort to observe how the overall salt crust is responding to the new bridge opening and what conditions are required for north arm water to begin precipitating salt. 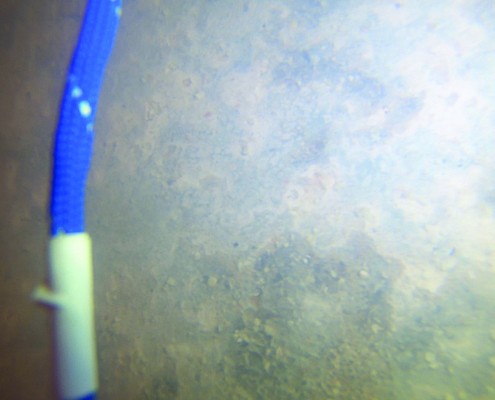 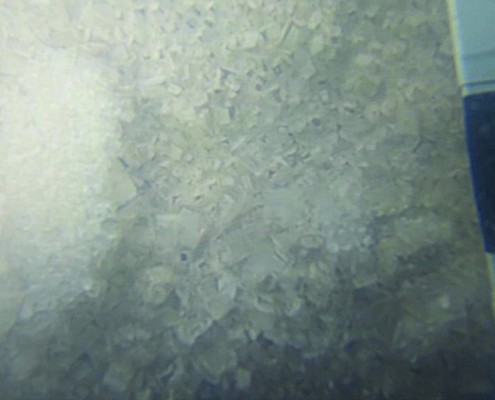 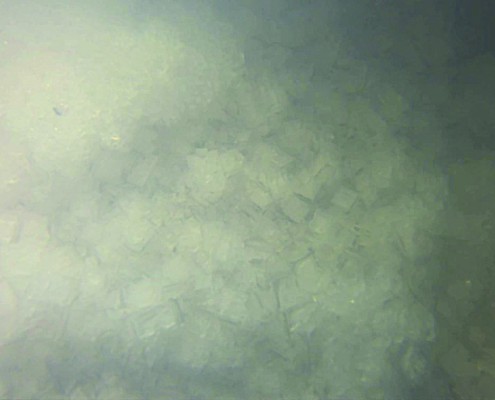 One innovative approach used was to take photographs of the lake floor in deeper parts of the north arm to observe the texture and characteristics of the ever-changing salt crust. This approach has been a challenge due to the turbid (or cloudy) conditions of the water, but we have managed to capture some scientifically significant images. In late summer 2019, we observed salt crust at water depths of 10 feet, but its appearance was flat and smooth, indicating that the crust was actively dissolving rather than growing. In deeper areas (about 25 feet) we observed a flat surface with a thin accumulation of fine sediment (we remain uncertain about the significance of this sediment). However, images taken at the same and other locations in late summer of 2020 showed something much different: coarse, newly formed salt crystals. This coarse texture of salt crystals is consistent with what we had observed in past research in the nearshore environment when salt was forming and the salt crust was growing. We are also attempting to pinpoint the conditions of the north arm water at which this salt starts to form. We routinely sample north arm water and measure its density in parallel with making observations of the salt crust. With some of our samples, we add more salt to see if it can be dissolved in the water or if the water is already holding as much salt as possible (i.e., at halite saturation). If the water can hold more salt, the density will be higher in the “spiked” sample than the sample to which no salt has been added (the “control” sample). Geochemical modeling of the chemistry of the north arm water has also allowed us to estimate the density at which the water is saturated and ready to precipitate salt. Based on our field observations, experimentation, and geochemical modeling, the north arm becomes salt saturated at a density of about 1.22 grams per cubic centimeter at room temperature. For comparison, fresh water has a density of 1.00 grams per cubic centimeter and seawater has a density of 1.02 grams per cubic centimeter.

This new information provides a piece of the puzzle that we and other researchers can use to understand and predict when the north arm salt crust will be growing and sequestering salt from the overall Great Salt Lake system or when the salt crust is dissolving and returning salt to the system. We can also look at past records of density measurements and infer, to some degree, when the salt crust was growing or dissolving. If the salt crust is returning salt to the system, the salinity of the south arm should increase, which, as previously mentioned, can impact the ecosystem and mineral industry at the lake. Our observations and conclusions should lead to a better understanding of how salt cycles through the Great Salt Lake system so that those who manage the lake can make more informed decisions on how or if the salinity of the lake should be adjusted by future modifications to the control berm or causeway.

A Lake Divided–A History of the Southern Pacific Railroad Causeway and its Effect on Great Salt Lake, Utah, Survey Notes, v. 34, no. 1, January 2002