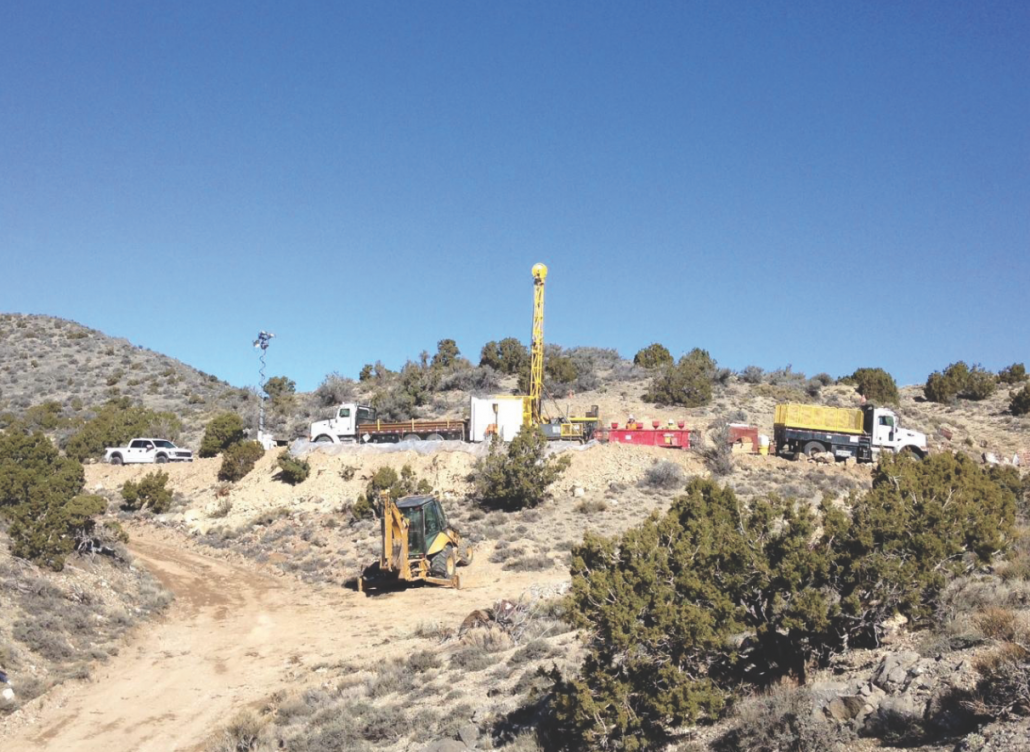 Mobilization of Freeport-McMoran’s drill rig in 2015 to drill hole DM-15-01 in the Drum Mountain district; the core was ultimately donated to the UCRC.

The Utah Core Research Center (UCRC) houses an ever-growing treasure trove of geological material and information, representing $5 billion worth of investment in Utah’s natural resources and including everything from core to cuttings and downhole logs to geochemical assays. In 2020, the UCRC received core from over 20 new boreholes and cuttings from more than 120 wells, including oil and gas, oil sand, and industrial mineral materials. These donations included over 6,000 feet of core from the Green River Formation in the Uinta Basin covering an area previously devoid of geologic data that will help answer long-standing questions about the evolution of ancient Lake Uinta and the Green River Formation petroleum system. Also in 2020, the UCRC repatriated Utah core from the Oklahoma Geological Survey, further consolidating Utah’s geological record in one place.

Though many of the materials housed by the UCRC are related to the oil and gas industry, the importance of the UCRC’s core repository to the metals exploration and mining community cannot be overstated. Districts often undergo several iterations of exploration and mining for metalliferous minerals, and access to this historical data and drill core can often save explorers significant time and money and can help reduce environmental impacts by minimizing the amount of duplicated fieldwork and drilling. The UCRC hosts cores from major mining districts across Utah, including the Stockton, Ophir, Mercur, Dugway, Drum Mountain, San Francisco, North Star, La Sal Mountain, and Lisbon Valley districts, and cuttings from a dozen more. The UCRC mining repository represents a substantial cross section through Utah’s prolific mining history.

But why do mining districts undergo so many different phases of exploration and mining? The periodicity of the mining industry is due to either new geological information or new economic drivers. For example, the Mercur district in Tooele County had a major resurgence in gold mining after geologic understanding of “invisible gold” expanded in the 1960s, and uranium in southeastern Utah only became more economically desirable than radium and vanadium after discovery of nuclear fission in 1938. Sometimes both new geologic information and changes in the economics of a project can spur new life in a mining district, such as discovery of high-tonnage, low-grade porphyry mineralization coupled with first-in-the-world use of steam shovel stripping and open-pit mining methods, the combination of which made Bingham Canyon the most productive mining district in the United States.

The Drum Mountain (or Detroit) mining district, located in south-central Juab and north-central Millard Counties, is a recent example of a district with a new lease on life. The district began as a copper, gold, and silver producer in 1872, but by the time active mining ended in 1976 the district had become the state’s largest manganese producer and produced minor amounts of halloysite clay, iron, and bismuth. Exploration evolved from targeting vein and replacement deposits in the early 1900s to targeting porphyry and sediment-hosted gold mineralization over several periods from the 1960s to present day. In 2012, the Drum Mountain district was the most competitive metal exploration area in Utah. Freeport-McMoRan was one of the companies active during this exploration frenzy. However, after drilling several holes they decided to drop their position in 2015. As good geological stewards, Freeport-McMoRan donated the entirety of one of their cores from the program, over 2,500 feet, to the UCRC. 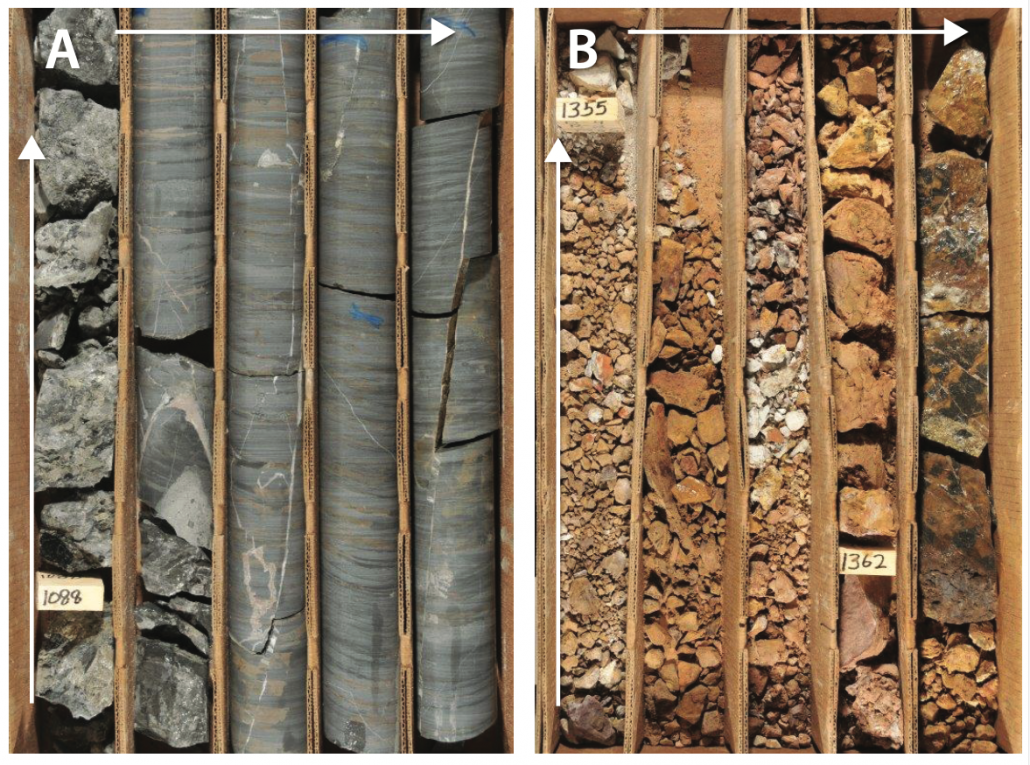 A) DM-15-01 core from 1,087.5 to 1,096.5 feet in the Whirlwind Formation showing a pebble dike in the top ~2.5 feet with quartzite, siltstone, and limestone clasts and minor disseminated pyrite. B) DM-15-01 core from 1,352 to 1,365.5 feet with strong brecciation, iron oxide and clay alteration, quartz and calcite veins, and 1,220 ppb gold at the faulted contact of the Dome Limestone and Chisholm Formation. Arrows show downhole direction.

Starting in 2019, the Drum Mountain district was back in the spotlight. Initially, interest in the district was related to critical mineral potential, specifically the significant manganese production from the district (see Critical Minerals of Utah, UGS Circular 129), which led to the donated Freeport-McMoRan core being photographed by UCRC staff through a data preservation grant from the U.S. Geological Survey. In 2020 Alderan Resources, an Australian-based junior explorer that has also been active in the San Francisco and Rocky mining districts of Beaver County, claimed ground in the Drum Mountain district in pursuit of sediment-hosted gold and porphyry copper targets. Although the UCRC was closed to public visits due to the COVID-19 pandemic during Alderan’s early exploration planning, the photographs of the Freeport-McMoRan core gave Alderan preliminary information on stratigraphy, alteration, mineralization, and structure to inform their exploration and drill program planning. The drill hole extends through a Cambrian-age section from the Pierson Cove Formation through the Prospect Mountain Quartzite, and most minerals-related alteration occurs in zones of structural deformation (e.g., a pebble dike in the Whirlwind Formation). The highest concentration of gold in the hole, up to 1,220 ppb, is found at the faulted contact between the Dome Limestone and Chisholm Formation.

The Drum Mountain district is a perfect example of how the UCRC aids the minerals industry by housing and protecting historical materials, while also following modern exploration trends and working to make materials accessible to explorers, researchers, and the public. However, none of this would be possible without the donation of materials in the first place, and we encourage explorers to consider donating representative drill core from projects across Utah to help us grow the repository of Utah’s geologic knowledge. If you are interested in donating core to the UCRC, please contact UCRC Curator Peter Nielsen at peternielsen@utah.gov or call (801) 537-3359.