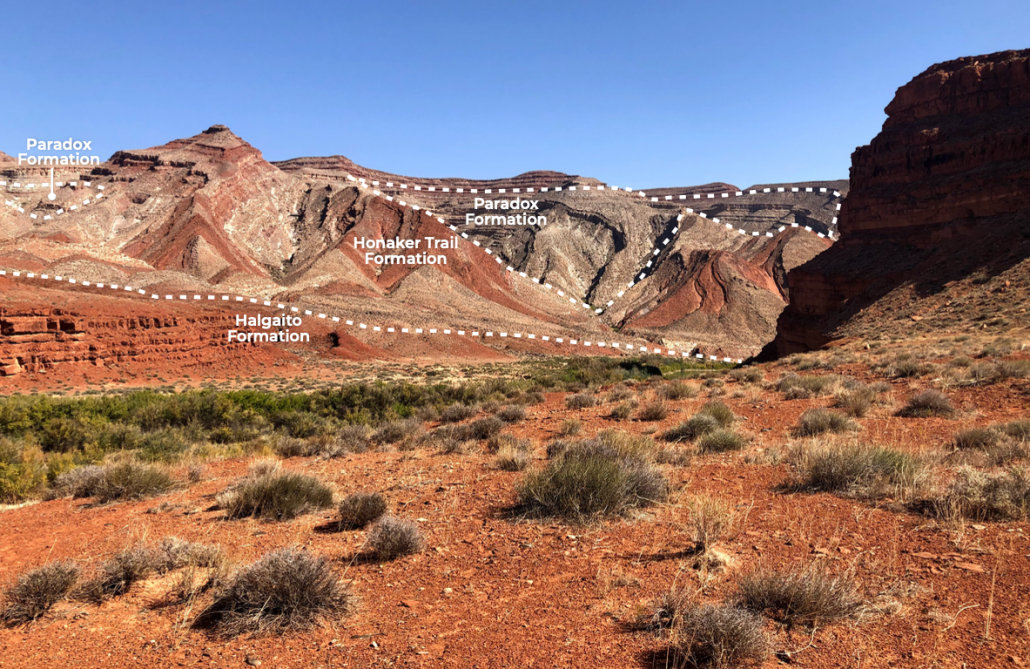 Raplee Ridge, a striking geographic feature in southeastern Utah, is commonly called “Raplee anticline,” or “Raplee monocline.” Geologically speaking, it is more accurate to call it a monocline, but on a map, you will only find the name Raplee Ridge. Regardless of the name, it is a beautiful feature that locals have described as resembling the design of a “Navajo blanket.” The multi-colored, zig-zagging triangular geometric shapes on Raplee Ridge’s steep western slope are shaped and colored like the patterns on beautiful blankets and rugs woven by members of the Navajo tribe. During the day, these colors tend to look washed out, but near sunset they become stunningly intensified. With approximately 1,600 feet of relief, the west-facing slope of Raplee Ridge can be seen from as far away as Goosenecks State Park and Mexican Hat Rock, which are ideal locations to take photos of the colorful hillside.

Geologic Information
At the base of Raplee Ridge, before it juts sharply upward, buff-colored, Permian-age (251–299 million years ago) rocks called the Cedar Mesa Sandstone overlie older, Permian-age reddish-brown siltstone and sandstone known as the Halgaito Formation. The siltstone and sandstone of the Halgaito Formation fold upward as you move east and up the western slope of Raplee Ridge. Underlying the Halgaito Formation, steeply tilted, multi-colored layers of even older Pennsylvanian-age (299–323 million years ago) siltstone, shale, and limestone make up the majority of the surface of the western slope and are known as the Honaker Trail Formation. The zig-zag pattern within the Honaker Trail Formation is caused by runoff-induced differential erosion, cutting deep gouges and gullies that expose the many layers on the western slope. Some of the gullies are deep enough to expose even older Pennsylvanian-age layers of cherty limestone, sandstone, siltstone, and shale known as the Paradox Formation. Between these cut valleys are erosion-resistant, upward-pointing triangles of rock called “flatirons.” They line the face of Raplee Ridge’s western slope, exposing many colorful rock layers in between. 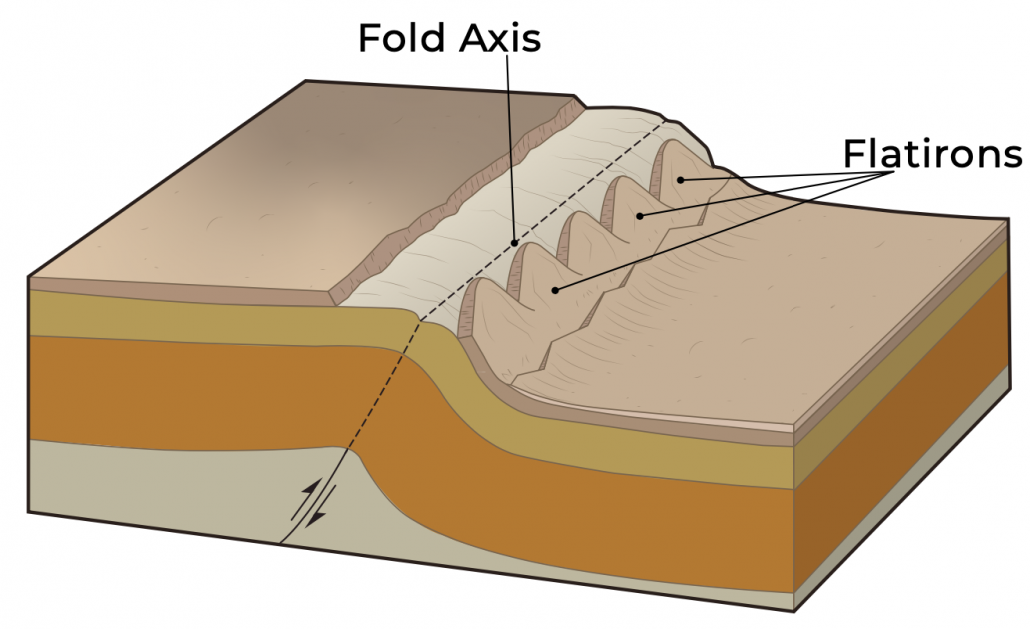 Block diagram of a monocline. Deep, compressional forces caused the rock layers to fold steeply upward along a relatively straight axis, creating a “step-up” in the ground. Flatirons are upward-facing rock formations that form along some monoclines (and other folds) when an upper layer of rock is more resistant to erosion than underlying layers.

Set amongst the flat, layer-cake geology of the Colorado Plateau, Raplee Ridge is the result of large-scale tectonic stresses that occurred during the Laramide mountain-building event (40–70 million years ago). During this time east-west-directed compressional forces buckled a region of present-day southeastern Utah known as the Monument Upwarp. Spanning between Comb Ridge to the east and approximately Lake Powell to the west, this buckle in Earth’s crust is a large anticline (or a fold that loosely resembles an inverted “V” shape). Within the Monument Upwarp, other north-to-south-trending structures (monoclines, synclines, and other anticlines) were created during the same period (see Survey Notes, v. 44, no. 2, p. 10). The shape and geometry of these structures within the Monument Upwarp are mainly a reflection of underlying structures created during the formation of the Ancestral Rockies (299–323 million years old) which are made up of Precambrian-age (greater than 541 million years old) rocks.
Raplee Ridge best fits the description of a monocline due to the rock layers getting tilted steeply up, then mostly flattening out at the peak of the ridge. Raplee Ridge is also called “Raplee anticline” because the rock layers to the east of its peak gradually extend down into the ground, loosely giving it the shape of an anticline; however, most geologists agree that it is better classified as a monocline. At the base of Raplee Ridge’s western slope, the rock layers plunge into the ground and then fold back upwards west of the town of Mexican Hat creating a U-shaped syncline called the Mexican Hat Syncline. 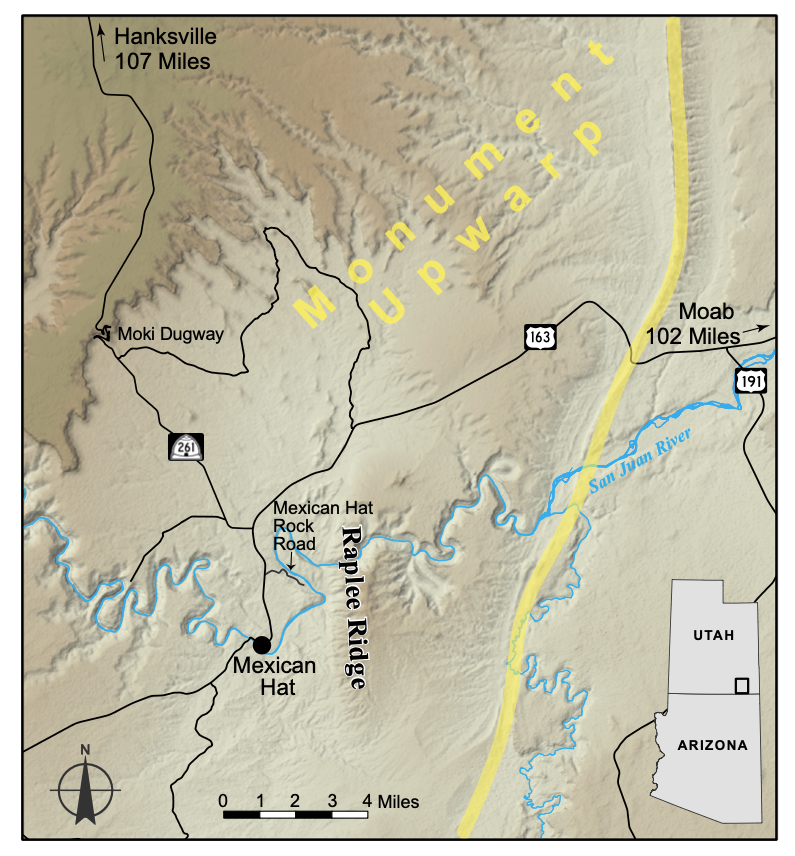 Among many places to view Raplee Ridge, the iconic Mexican Hat Rock sits close to the base of Raplee Ridge and is an excellent viewpoint:

From Moab, drive south on U.S. Highway 191 for approximately 100 miles to Bluff. Roughly 3 miles west of Bluff, continue straight at the intersection onto U.S. Highway 163. Continue west on U.S. 163 for 18 miles and then turn left (east) onto Mexican Hat Rock Road (unpaved). There are multiple safe places to park along Mexican Hat Rock Road; however, it does dead end after approximately 1.5 miles.

From Hanksville, drive south and east on Utah State Route 95 for approximately 93 miles and then turn right (south) onto Utah State Route 261/County Road 235. Along Route 261, between 23 and 25.7 miles, an unpaved, difficult to traverse, and sometimes impassable (due to inclement weather) section of switchbacks known as Moki Dugway will be encountered. Approximately 7 miles after Moki Dugway, turn right (south) onto U.S. Highway 163 and continue for 1.5 miles then turn left (east) onto Mexican Hat Rock Road (unpaved).

The best time and place to view Raplee Ridge is near sunset from any location west of the Ridge.