Glad You Asked – What is a Dropstone?

A dropstone is an oversized stone deposited in a fine-grained sediment that would seem a paradox. Ordinarily, the amount of energy in moving water sorts sediments by size. Quiet, calm waters deposit tiny sediment particles, such as the mud found on lake beds and ocean floors. Raging waters deposit larger rocks, such as the cobbles and boulders in steep mountain stream beds. So how can comparatively large, exotic stones end up within an otherwise fine-grained rock matrix? Dropstones are indeed dropped from above. 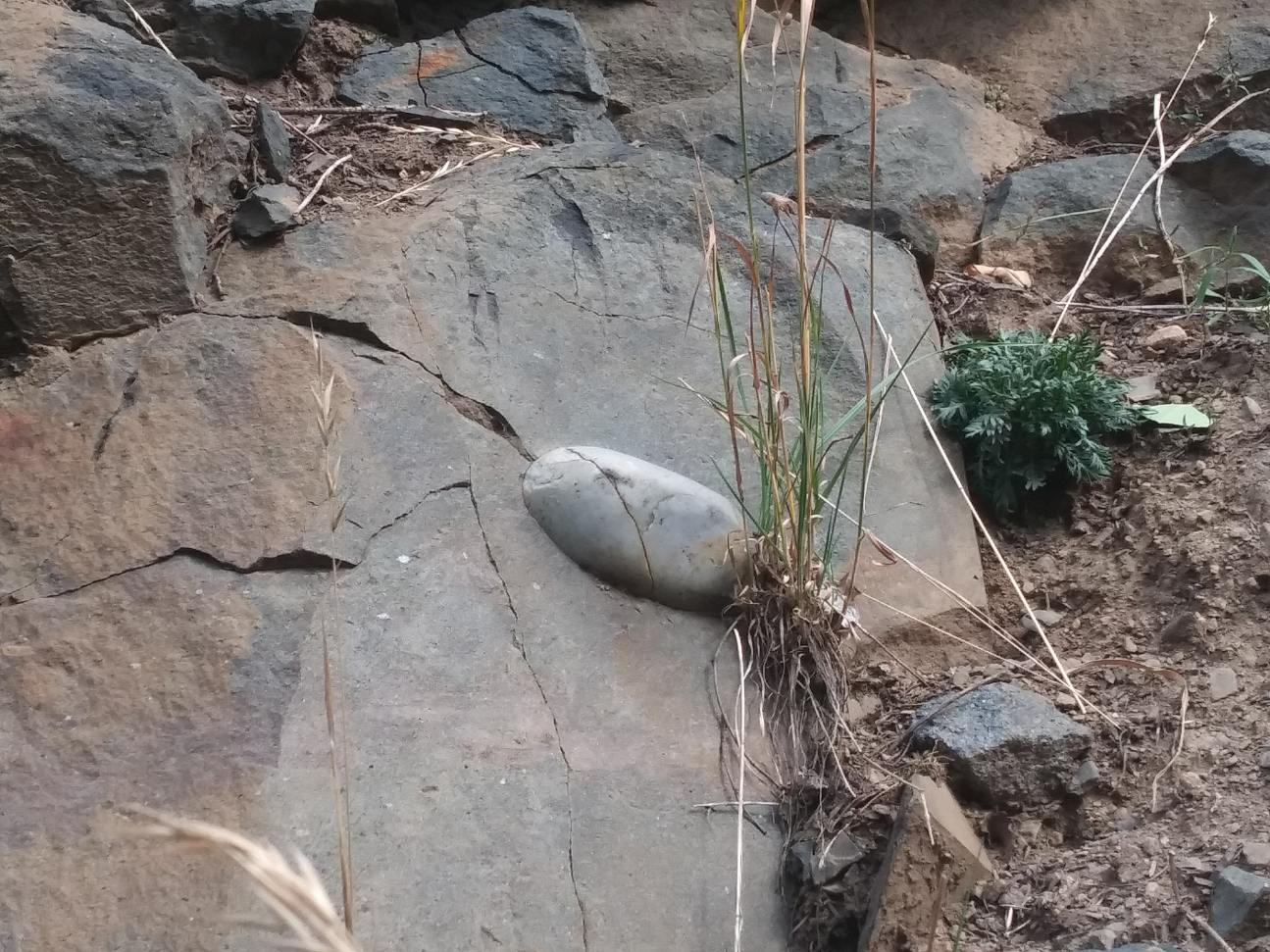 A quartzite dropstone weathers out in positive relief in Mineral Fork Canyon, Salt Lake County. Dropstone is 6 inches on the long axis.

Dropstones indicate that a rock was, by some agency, relocated to a still, low-energy environment. Once a stone is transported to a body of water and then released into it, it drops through the water column and lands on fine-grained sediments. It is eventually buried over seasons or centuries as additional fine-grained sediment and other tiny particles settle out of the water column and the dropstone is locked in as its surroundings lithify over time. The presence of the oversized stone amid fine, sometimes laminar or varved sedimentary rock, appears a contradiction unless evidence of its emplacement can be found for example, deformation or truncation of underlying sediments from impact, or the draping of overlying sediments—denoting its overhead origins.

Ice is the most common source of dropstones. However, dropstones can also come from animals, plants, volcanoes, landslides, and avalanches.

The most prevalent and largest dropstones are rafted by ice. When glacial, shoreline, or river ice incorporates rocks and becomes sea-faring, these rock-rich ice masses release stones into the marine sediments as the ice melts and the integrated rocks are freed. Since icebergs can be of massive size, they can hold immense quantities of rock that are regularly dropped onto the ocean floor, potentially over the course of months or even years.

Dropstones from animals come from gastroliths, or stomach stones. Aquatic animals such as Mesozoic Era marine reptiles, crocodilians, and present-day seals, sea lions, walruses, and penguins consume rocks to help grind down food, particularly fish bones, or the stones are used as ballast for stabilization in the water. Terrestrial animals such as reptiles and herbivorous birds, as well as Mesozoic-age sauropod dinosaurs, also ingest gastroliths for pulverizing vegetation. Animal dropstones often occur in clusters because of multiple stones in the digestive system, in some instances numbering up to hundreds of stones, sometimes up to cobble-size in larger creatures. 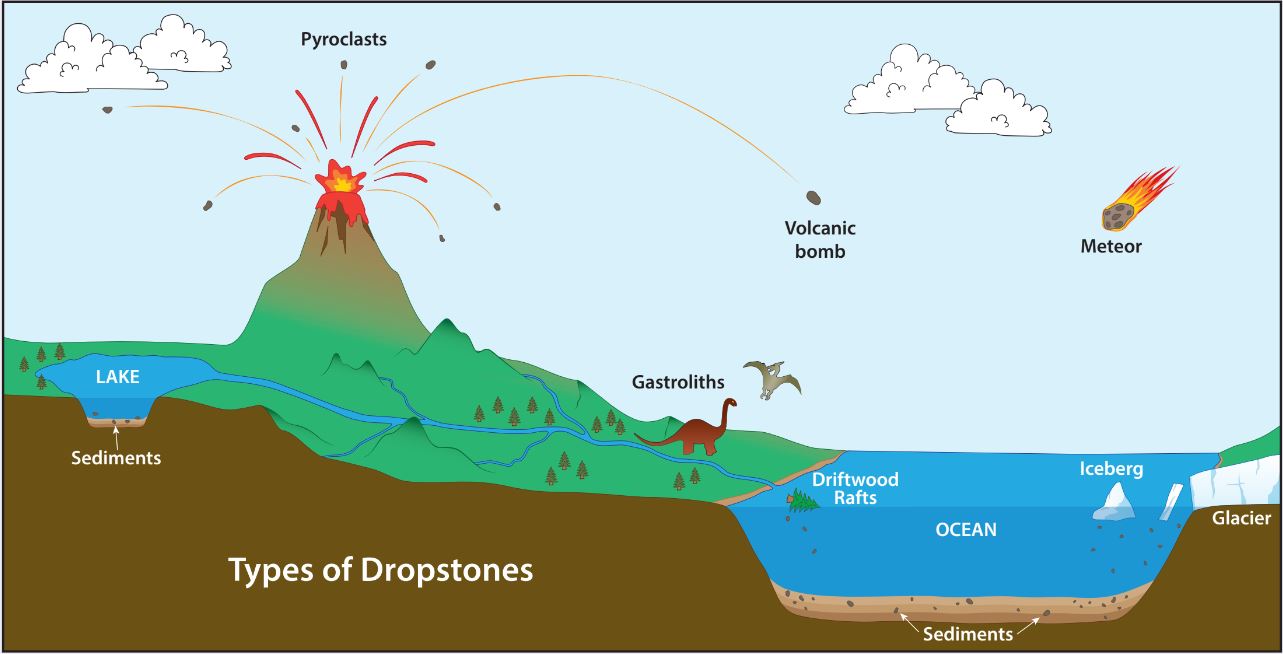 Trees often wrap their roots around stones in the soil. If uprooted and swept away into a river or the ocean, they become driftwood. The root- bound rock drops once the wood is waterlogged. Similarly, brown kelp and seaweed offshore attach to substrate with holdfasts. With air sacks for floatation and “leaves” (blades) for sailing, kelp can carry rocks far into the sea. Tangled, and sometimes massive, mats of vegetation provide a raft for stones, particularly in the tropics.

Dropstones can come from volcanoes and on occasion from space, in the form of meteorites. During eruptions, volcanoes eject rocks as pyroclasts. Pyroclasts can be small to quite large, and airborne rocks from violent eruptions can crash-land miles distant from their departure point. Some pumice will float until waterlogged, and then sink.

Landslides are known to generate dropstones in the ocean as do snow avalanches spilling out onto frozen lakes. Recently and increasingly, far-reaching human activity places a wide variety of dropstones that might one day be preserved in the geologic record.

A dropstone is older than the rock it is encased in. The source of the rock or the geological formation from which it came may not be known, or it may no longer exist, having eroded away. The dropstone could be any kind of rock—yet enduring the journey from initial site to the watery depths favors the resilient, such as quartzites and other metamorphic, igneous, and siliceous rocks. Oftentimes the dropstone is rounded from tumbling and abrasion within a glacier, a river, or on a beach. Glacial dropstones can be scored or striated from being ground against bedrock while in the ice stream. Gastroliths are ordinarily more highly polished than water-rounded stones and could be accompanied by fossil bone from the animal. Kelp-derived dropstones can have crusts and burrowing from shallow marine organisms. Volcanic bombs, ejected partially molten, can be aerodynamically shaped through flight or show impact features such as flattening and distortion. 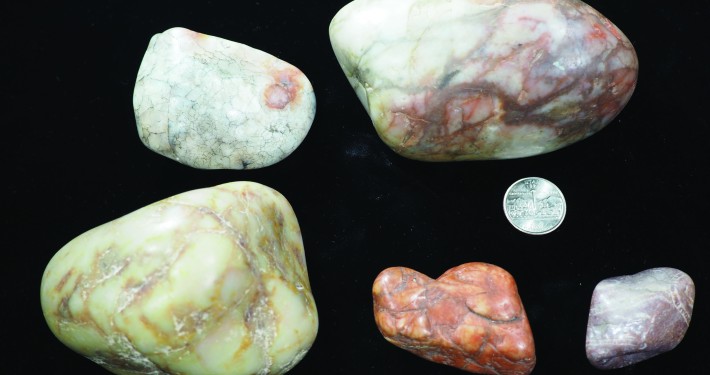 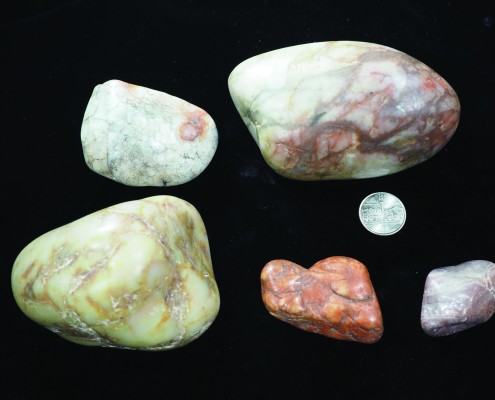 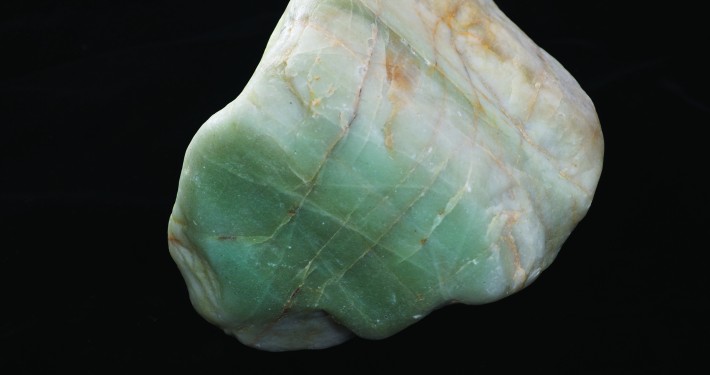 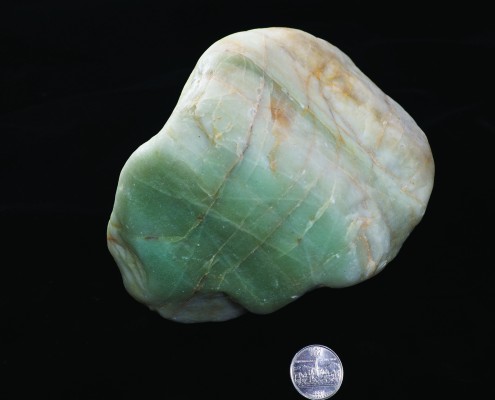 An ideal place to see dropstones in Utah is anywhere the Precambrian-age Mineral Fork Formation outcrops, such as the upper Mineral Fork Canyon in Big Cottonwood Canyon (the formation’s namesake), northern Antelope Island, west of Hellgate and at the mouth of and west of Peruvian Gulch in Little Cottonwood Canyon, Pine Creek Canyon in Wasatch County, near the mouth of Rock Canyon northeast of Provo, in Tank Canyon on the north side of American Fork Canyon, and in the equivalent Dutch Peak Formation constituting much of the Sheeprock Mountains in Tooele and Juab Counties. Other Precambrian-age rocks with dropstones are in the Deep Creek Range in Juab County and in the Perry Canyon Formation in and south of Perry Canyon in Box Elder County and between North Ogden and Pineview Reservoir in Weber County. These units represent a time known as the Cryogenian period, or “Snowball Earth” that occurred three-quarters of a billion years ago and lasted, with intermissions, some 100 million years. Utah at that time was positioned in the Tropical Zone, at sea level, and was overrun by glaciers—with embedded stones—calving icebergs into the ocean.