The Utah Geological Survey and the National Park Service: 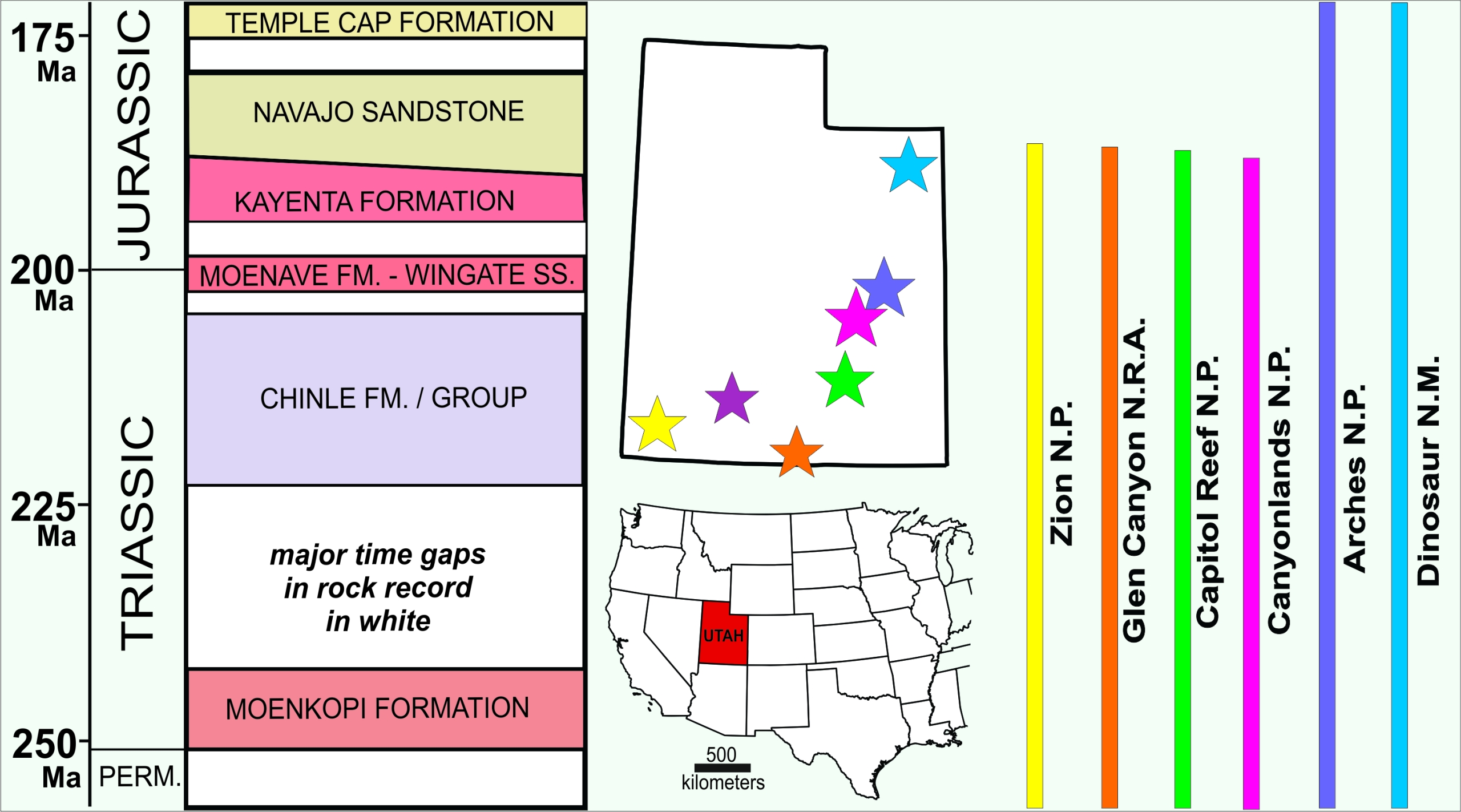 The Utah Mesozoic rock units discussed in the text with a key (vertical color bars) to the rocks of the national parks of Utah that we surveyed.

Utah has one of the best fossil records of any place on Earth and our national parks contain amazing fossil resources. Fossils found in Utah’s national parks range in age from the Paleozoic Era through the Holocene Epoch (541 million years ago [Ma] to recent). Many of the parks showcase the spectacular Mesozoic-age (252 to 66 Ma) red-rock scenery of the Colorado Plateau, and most vertebrate fossils are found in these rocks. Rocks of Triassic (252 to 201 Ma) and Jurassic (201 to 145 Ma) age are particularly well represented. The Triassic Period and the Triassic-Jurassic transition have been the focus of considerable research because this interval is associated with a major evolutionary radiation and subsequent extinction event linked with the rise of most modern terrestrial animal groups. Because the Colorado Plateau preserves so many rocks of this age, it is a unique locale to study the strata of these time periods. One of the most fossil-rich formations on the Colorado Plateau is the Triassic-age Chinle Formation, which is exposed in many of Utah’s national parks. Much of what we know about Late Triassic terrestrial ecosystems has been discovered by studying fossils found in this formation, and we have concentrated many of our surveys in that formation because of the high potential for scientifically significant fossils. We have collaborated with researchers from many different universities and our research dovetails with other research being done on these rocks. Many of the Jurassic-age rocks we have surveyed are sandstones that rarely preserve body fossils but instead preserve tracks. The surveys we have conducted have led to important discoveries that help to refine our knowledge of the geologic history of the region. Through our partnership and work with the NPS, we have found and documented hundreds of new fossil localities in Utah’s national parks. The following are a few highlights from our past and ongoing work with the NPS. 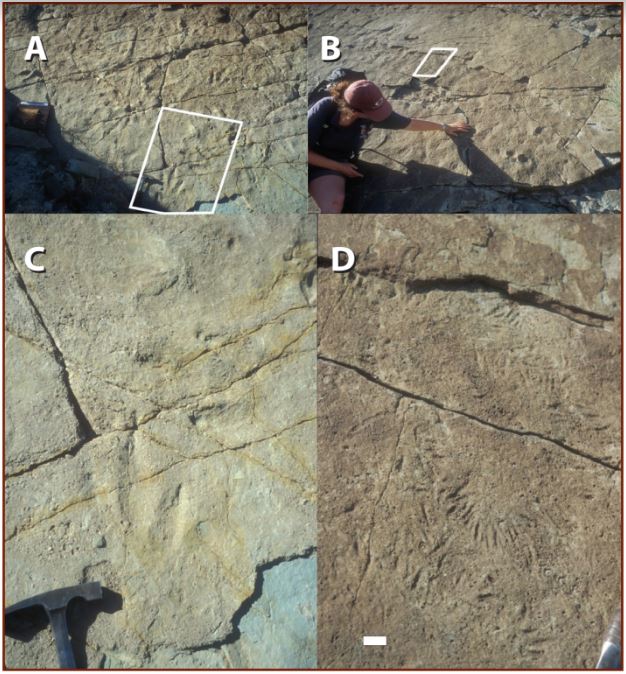 Along with Dinosaur National Monument, Arches is one of the few Utah parks to contain significant amounts of Late Mesozoic-age dinosaur-bearing strata. These include the world-famous Jurassic-age Morrison Formation and the Early Cretaceous-age Cedar Mountain Formation. Numerous dinosaur sites have been documented at Arches, but one highlight of our work in the park was the discovery of a tracksite in the Cedar Mountain Formation that preserves several kinds of dinosaur footprints, including the two-toed track of a sickle-clawed meat-eating dinosaur. We have also found interesting trace fossils at this site that we think are feeding traces made by an animal such as a bird or pterosaur that was floating in shallow water and probing the bottom with its beak. Many other tracksites have been found in Lower Mesozoic strata at Arches including in the Moenkopi, Chinle, Wingate, and Kayenta Formations and the Navajo Sandstone. One noteworthy find in Arches was a portion of a dinosaur skeleton in the Kayenta Formation, the first dinosaur body fossil found in the Kayenta of Utah. The fossil is currently under study and is thought to belong to a theropod dinosaur similar to Dilophosaurus. 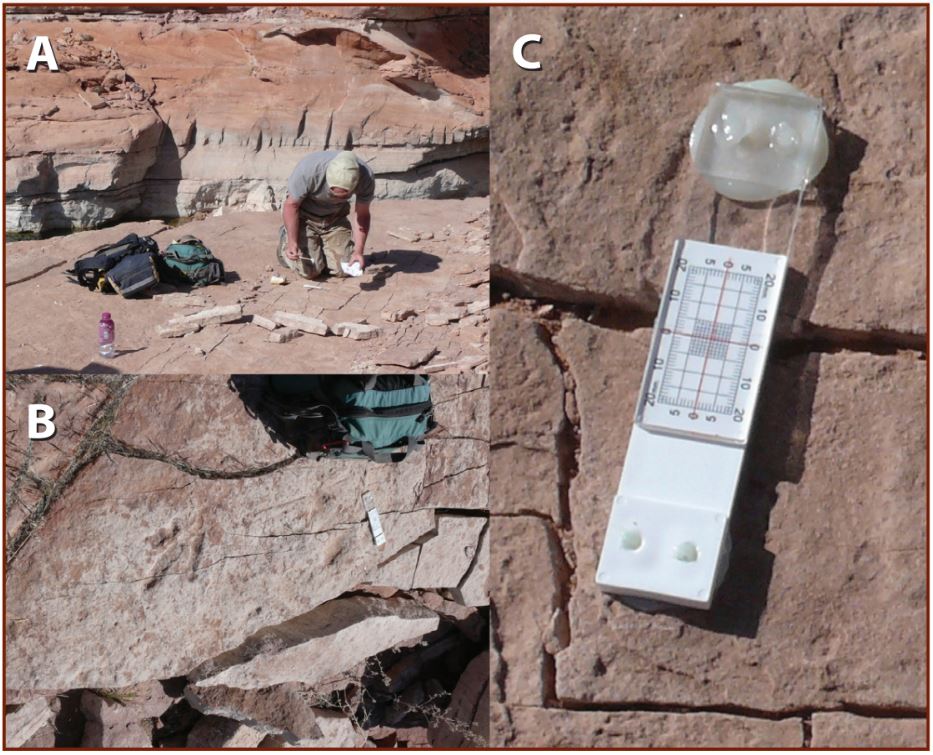 In terms of parks to work in, it doesn’t get much more spectacular than Zion. The western part of the main park area near Mount Kinesava contains excellent outcrops of Triassic-age Chinle Formation. This formation has the greatest potential for body fossils in the park, and we have documented many sites having fossils of phytosaurs (crocodile-like reptiles), aetosaurs (armored plant-eating reptiles), metoposaurs (large amphibians), and fish. This area has many petrified logs along a trail formerly known as the Petrified Forest Trail.

Other collaborative work in Zion includes measuring a section and sampling for isotope geochemistry in Blacks Canyon with Celina Suarez (University of Arkansas) to identify the Triassic-Jurassic boundary in the Moenave Formation and correlate it with global climate events. In Zion Canyon, we located and documented dozens of dinosaur tracksites primarily in the Early Jurassic-age Moenave and Kayenta Formations. At the top of the Springdale Sandstone Member of the Kayenta Formation we found that tracks are very common, and that this interval constitutes a megatrack surface that likely contains thousands of dinosaur tracks. We provided the park with PFYC (Potential Fossil Yield Classification) maps based on recently completed UGS 7.5-minute-quadrangle geologic maps to help park management identify areas of high paleontological sensitivity.

Our work in Glen Canyon National Recreation Area was done primarily along the shores of Lake Powell using boats for access. Once again, Triassic- and Jurassic-age rocks form the bulk of the strata found at Glen Canyon. We found many wood and bone sites in the Chinle Formation and many tracksites in the Kayenta and other formations. During our work we found and documented 50 new fossil localities. The importance of documenting these sites becomes ever more critical as lake levels drop and these sites are threatened by erosion and vandalism. We also established several monitoring sites to quantify the amount of movement of fractures in tracksite surfaces to get an idea of erosion rates.

The spectacular outcrops of the Monitor Butte Member and the Capitol Reef Bed of the Chinle Formation at Capitol Reef National Park are some of the most fossiliferous in Utah. We documented dozens of new localities and enlisted the help of Jeff Martz (University of Houston, Downtown) to measure several stratigraphic sections that contain these fossils. This stratigraphic context allows us to chart the evolution of the plants and animals and changes in climate through time. The rocks at Capitol Reef tell a fascinating story of climate change driven by plate tectonics as the supercontinent Pangea drifted northward from the humid tropical belt into the arid subtropical belt during the Late Triassic. Also, during our survey we rediscovered a site that was first documented during the 1980s that preserves a standing “grove” of the giant horsetail Equisetites. With the help of Jack Wood of the NPS, we collected three-dimensional (3D) photogrammetric data and generated a 3D model of the site. Comparing this to photos of the site when originally found allows us to assess the vulnerability of the site to erosion.

During work in the northern region of the park, we recognized that a large area of rocks from the Cretaceous-age Cedar Mountain Formation are present in an area that had been previously mapped as Jurassic-age Morrison Formation. We returned to the park to document these rocks and with the help of UGS mapping geologist Grant Willis, we are in the process of updating the geologic map of the area. This illustrates how these park surveys can yield unexpected benefits to our knowledge of geology.

Stratigraphic column of Chinle Formation rocks in Capitol Reef National Park with reconstructions of some of the fossils found during our paleontological survey. From Martz and others (2015). 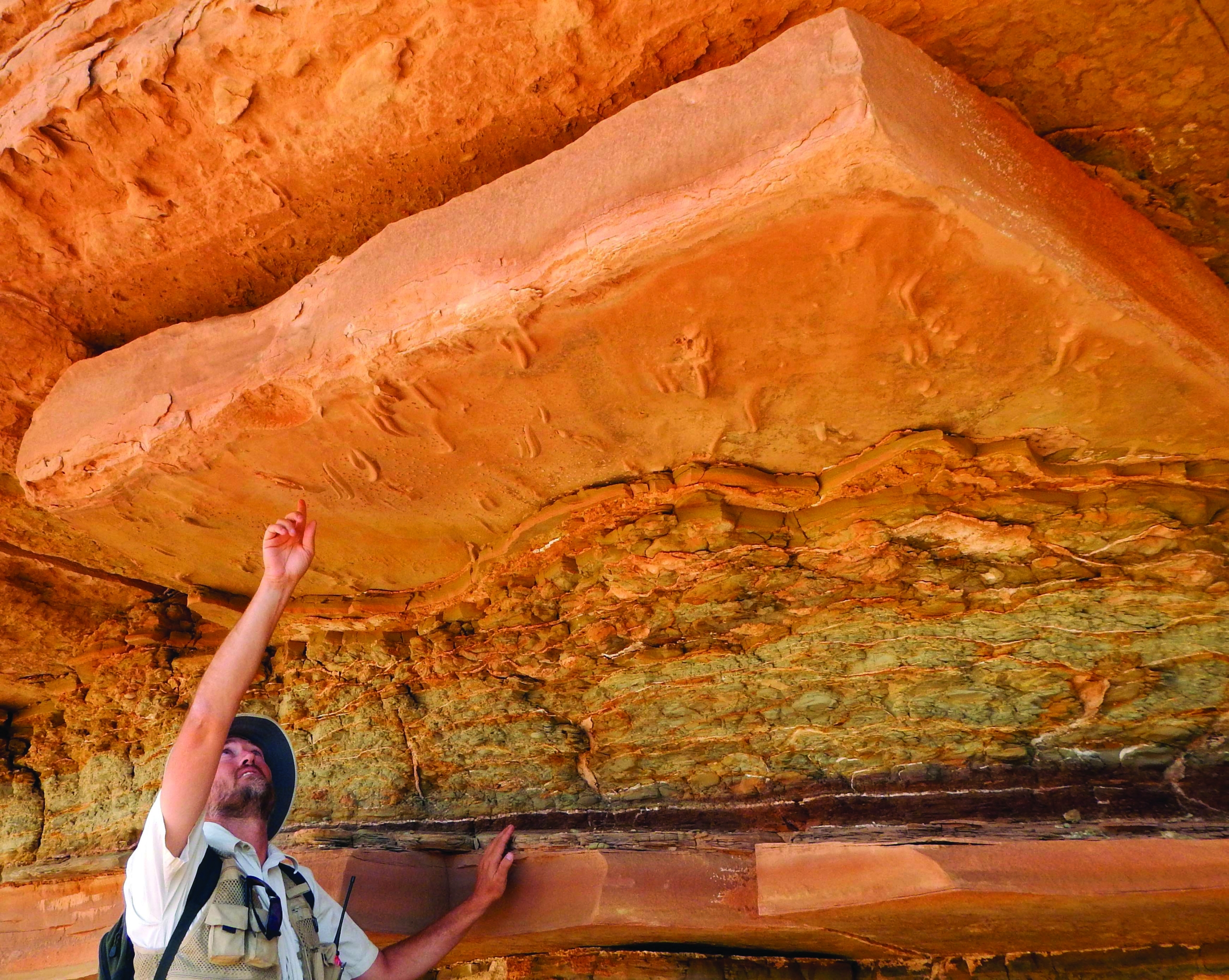 Tracy Thomson points to chirotheriid swim tracks in the Torrey Member of the Moenkopi Formation in the Island in the Sky District of Canyonlands National Park.

Our most recent work at Canyonlands National Park began in the fall of 2020 with a survey of the Island in the Sky District. Prior to our survey, the Utah Paleontological Database, managed by the UGS, had two paleontological localities in the Island in the Sky District. We found and documented over 70 new sites during our two 10-day field expeditions. Once again, the Chinle Formation was the primary focus of our explorations. We found several bone-bearing sites with fossils of phytosaurs, metoposaurs, and fish, and identified several stratigraphic levels that commonly preserve petrified wood and logs.

Although we concentrated our efforts on the Chinle, Canyonlands has a large amount of Early Triassic Moenkopi Formation, and one of the most successful parts of our work was the discovery and documentation of many scientifically significant tracksites, most commonly “swim tracks,” in the Torrey Member. These tracks are made by buoyant and semi-buoyant reptiles padding along the bottom while floating in water. Moenkopi swim track expert Tracy Thomson (University of California, Davis) helped us during the project and remarked that these are some of the best-preserved swim track sites on the Colorado Plateau. Our work in the park was so successful that we were funded for a second phase of the project in 2022 and a third phase in 2023.

Our collaboration with the NPS over the years has resulted in many important scientific discoveries and documented important fossil resources. These fossils are a significant feature of Utah’s national parks and are a draw for tourists who help to support rural economies in Utah. We plan to continue our partnership so these resources can be managed for the benefit of the American people and all visitors to the spectacular national parks of Utah. 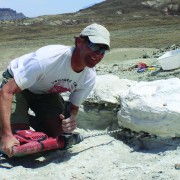 has been with the UGS for 21 years and serves as the Utah Assistant State Paleontologist. Don oversees the UGS field paleontology program and fossil preparation lab. He has authored or co-authored over 20 professional papers and helped discover and name six new dinosaurs and two new fossil mammals from Utah. Over the last 30 years, he has helped to lead dozens of field expeditions searching for vertebrate fossil in the western U.S., Egypt, Madagascar, Namibia, and Tanzania. 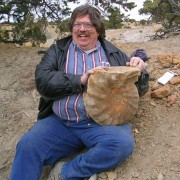 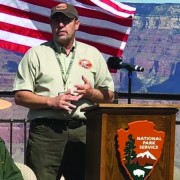 is the Senior Paleontologist and Paleontology Program Coordinator for the National Park Service (NPS). Since 1985, Vince has held assignments at Badlands, Petrified Forest, Grand Canyon, Yellowstone, Fossil Butte, Tule Springs Fossil Beds and other national parks, as well as supported geology and paleontology projects in over 280 national park areas. Vince has been a leader for paleontological resource management, protection, education, stewardship, and science in the U.S. and has published more than 275 articles and reports related to NPS paleontology.