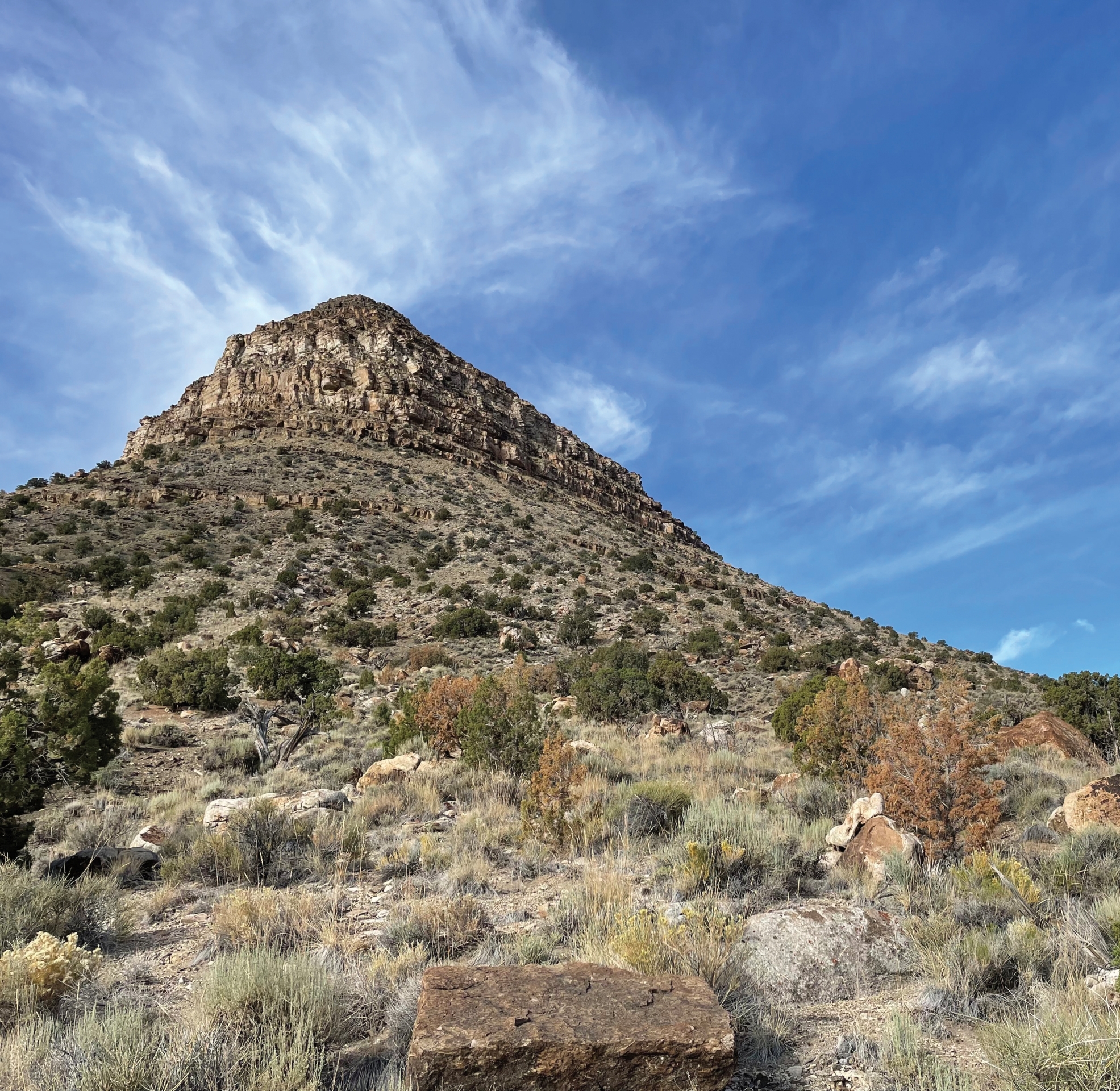 View of Fossil Mountain from the northeastern slope.

Fossil Mountain is a peak on the south end of the Confusion Range in Millard County, Utah, named after the abundance of marine fossils found on its slopes. The locality is popular for rockhounds and fossil hunters because of the variety of finds included in a desert wilderness experience.

Fossil Mountain has a collection of geologic strata exposed in neat layers. At the base of Fossil Mountain are strata of the upper Pogonip Group, which consists of four formations. From oldest to youngest these are the poorly exposed Wah Wah Limestone, Juab Limestone, Kanosh Shale, and Lehman Formation. The upper Pogonip Group is a mix of limestone, calcium-rich siltstone, sandstone, conglomerate, and shale. These formations were deposited during the early and middle Ordovician Period (485 to 458 million years ago) when nearly one-half of Utah existed as a shallow, carbonate marine shelf near the equator. Utah’s section of this shelf was only a fraction of the vast carbonate platform on the western margin of the paleocontinent of Laurentia. There were different stages of shallow sea environments during the approximately 27-million-year duration of deposition of the upper Pogonip Group rocks, which is evident in the varying rocks and fossils of each formation.

Eventually, quartz-rich sands that were eroded from the northeast overwhelmed the carbonate platform, depositing sediments into the shallow water and beaches. These sediments formed the Watson Ranch Quartzite, Crystal Peak Dolomite, and Eureka Quartzite, all of which are composed of various mixes of quartzite, limestone, and dolomite. They overlie the upper Pogonip Group, and the Eureka Quartzite forms the peak of Fossil Mountain. 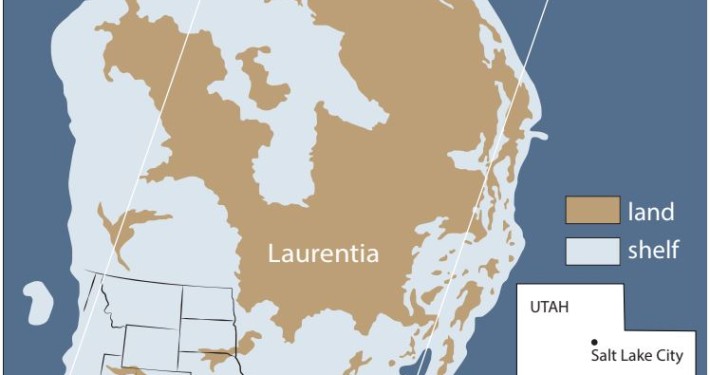 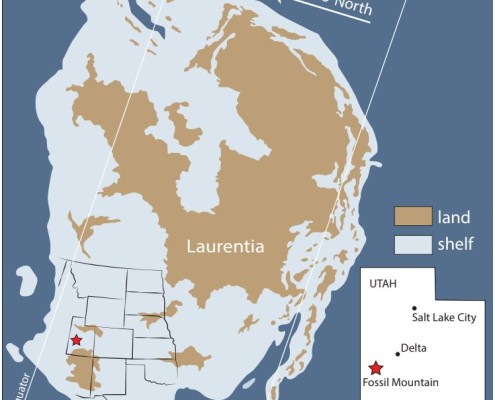 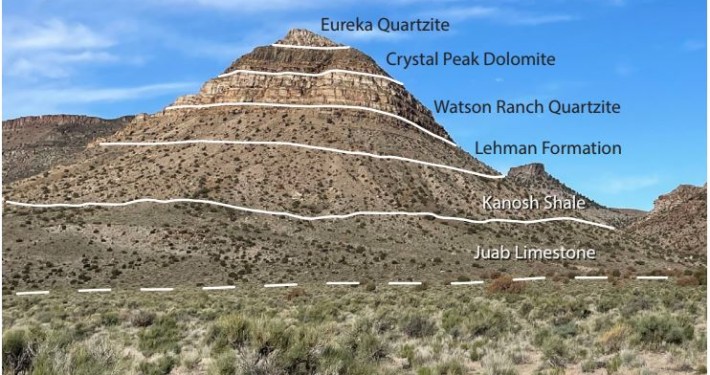 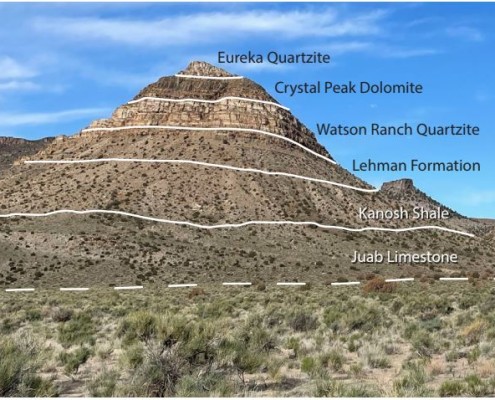 During the Ordovician, Utah’s shallow sea and carbonate shelf environment had a humid and hot atmosphere at the equator that enabled a vast number of diverse organisms to flourish. The diverse fossils correlate with the Ordovician Radiation, a biodiversification event that happened after the more famous Cambrian Radiation or “Explosion.” Although the Cambrian Radiation was the beginning of many major phyla showing up in the fossil record, the Ordovician Radiation was biodiversification at the family, genus, and species levels. Fossil Mountain has many specimens that showcase this diversification, including trilobites, graptolites, conodonts, brachiopods, echinoderms, ostracods, gastropods, cephalopods, pelecypods, sponges, bryozoans, corals, cyanobacteria, and trace fossils. 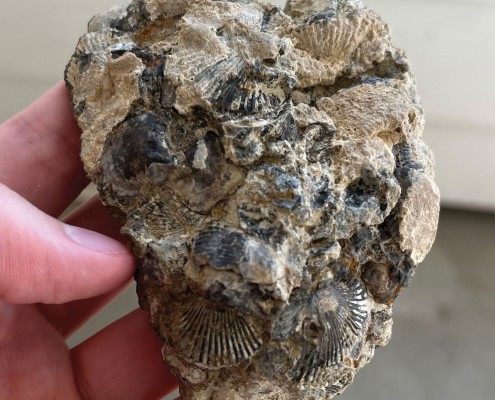 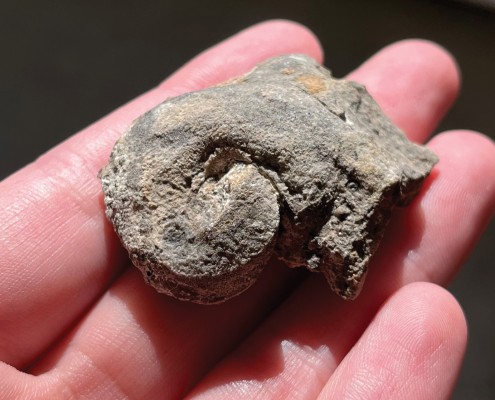 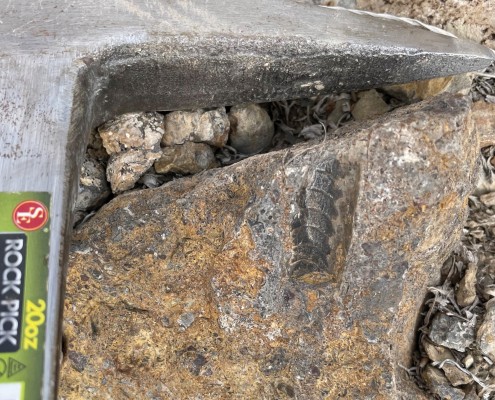 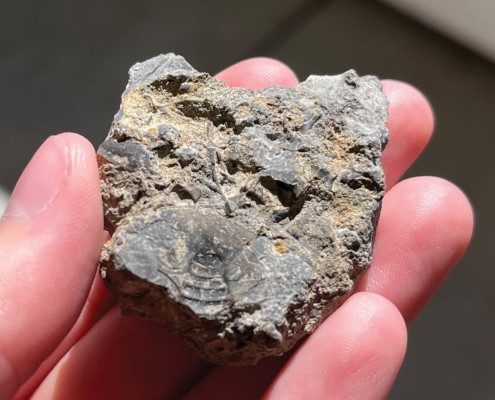 The fossils at Fossil Mountain are often fragmentary due to being accumulated in a high-energy, wave-dominated shoreline environment. They are also usually cemented together with other fossils. Brachiopods, gastropods, crinoids, cephalopods, and trilobites are the easiest to find and identify. You can find them in the loose rocks on the slopes of Fossil Mountain. Although specimens are plentiful on all slopes, fossil hunters report finding better quality fossils the higher they search up the hill.

Fossil Mountain is part of the King Top Wilderness Area and only surface collecting is allowed. Digging is prohibited. The U.S. Bureau of Land Management Fillmore Field Office manages the site and allows reasonable amounts of collection for personal use with no intent to sell. It is important to limit collection so future visitors can also appreciate the abundant fossils.

Fossil Mountain is only one of over 100 rockhounding sites on the UGS’s new online interactive map—Utah Rockhounder. This new web application has a map of rock, mineral, fossil, and landscape rock localities, as well as location coordinates, site descriptions, and photos. You can also read updated collecting rules and regulations for public lands and find resources for identifying your find! Check it out at geology.utah.gov/apps/rockhounder. 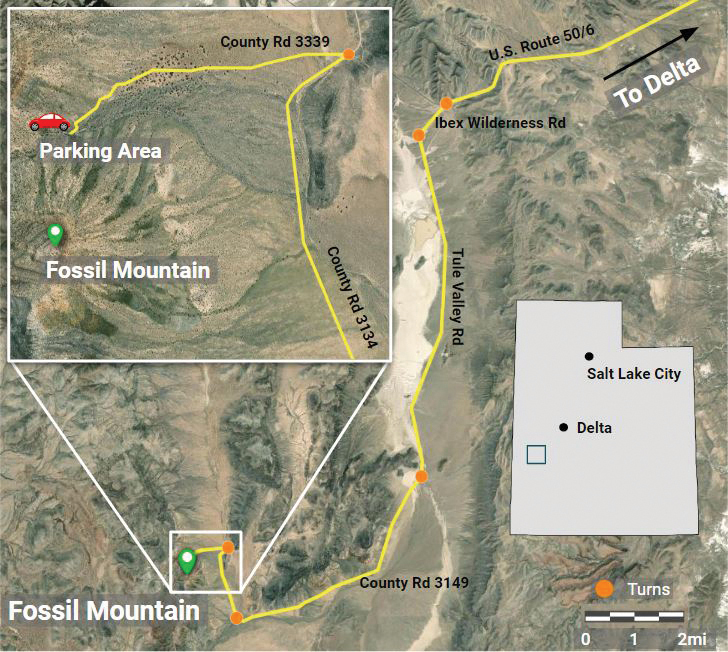 From Delta, Utah, travel southwest on U.S. Route 50/6 for 49.4 miles, turn left onto Ibex Wilderness Road, and left again on Tule Valley Road. After 7.5 miles, turn right onto County Road 3149 and travel for 5.6 miles before turning right onto County Road 3134. After 1.7 miles, you will find an intersection of dirt roads. Turn left on County Road 3339 and you can drive as close to the mountain as your vehicle can safely travel and park. There are primitive campsites on this road where you can park and walk in.

For access to Fossil Mountain, 4-wheel-drive is not necessary but helpful if you want to drive the rougher roads closer to the site. Parking farther away and walking in is also an option. There are no services, so be prepared with water, sun protection, plenty of fuel, and vehicle emergency essentials. The closest services are in the town of Delta to the northeast or Milford to the southeast. It is highly recommended to have a paper map or downloaded map, as phone and internet service in this area is unreliable.