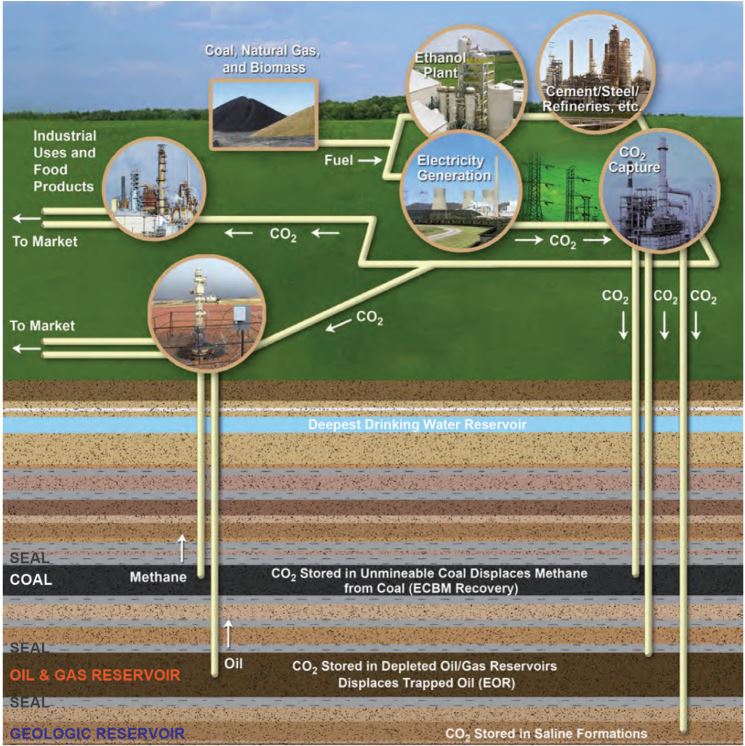 The Inflation Reduction Act (IRA), which aims to reduce U.S. greenhouse gas emissions by roughly 40 percent by 2030, was signed into law in August 2022. The act increases the economic incentives of Carbon Capture Utilization and Storage (CCUS) for the private sector by introducing a variety of provisions that increase the magnitude and applicability of “45Q tax credits” associated with CCUS projects.

CCUS generally describes all parts of the process of gathering carbon dioxide (CO2) from the atmosphere or other point sources (e.g., power plants and petroleum refineries) and either using it (utilization) or storing it (sequestration) in underground geological formations (see Survey Notes, 2022, v. 54, no. 2). Industrial facilities, such as power plants, chemical plants, and iron, cement, and gas processing plants are fundamental to society and the economy; however, they produce significant CO2 emissions that contribute to global warming. These industrial facilities are considered point sources of emissions because they emit a relatively dense volume of greenhouse gas into the atmosphere at a single location. These facilities can be designed or retrofitted with carbon capture technology to gather CO2 on site and pump it into underground rock formations, where it is trapped for long periods of time, rather than allowing it to enter the atmosphere. CO2 can also be removed from the atmosphere through direct-air-capture (DAC) technology, a flexible and scalable burgeoning technology that involves building complex machinery that removes CO2 directly from the air, but this technology currently requires more energy to capture CO2 than re-designing or retrofitting point-source facilities. CCUS was proposed as early as 1977, but it has not yet been widely deployed due to lack of incentives—the process takes considerable energy to capture, compress, and reinject CO2 into the ground and these energy costs, as well as infrastructure costs, have been previous and persistent hurdles for economically viable CCUS projects. However, the IRA increases relevant tax credits, thus making projects more viable and encouraging greater participation in CCUS by the private sector.

What are the 45Q tax credits and how were they changed in the Inflation Reduction Act? 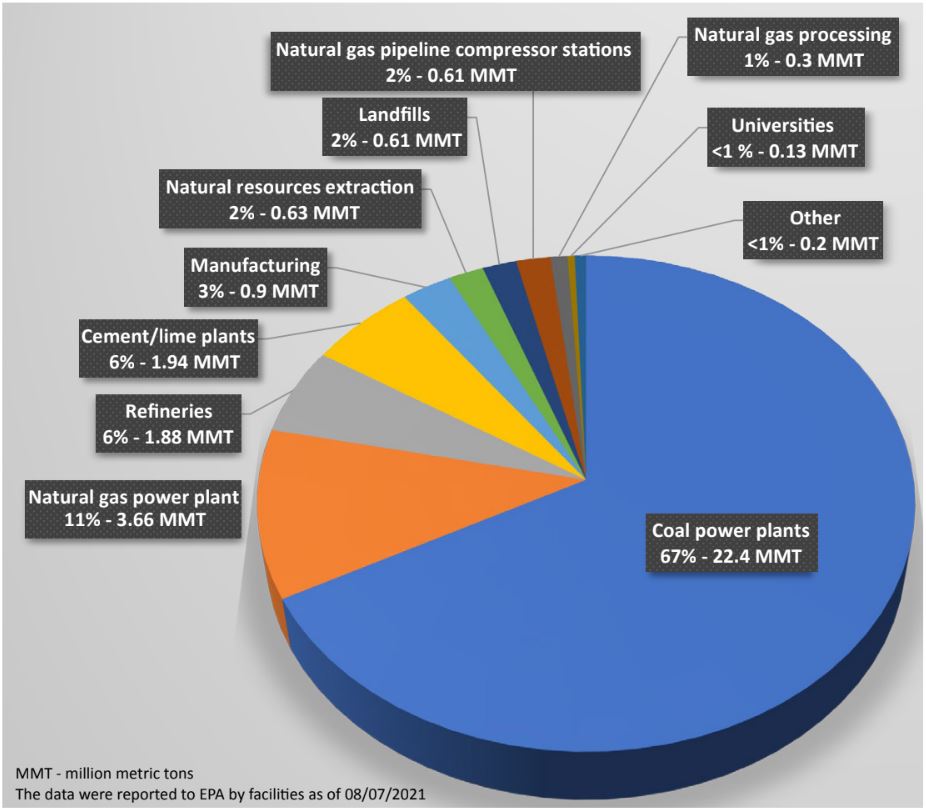 Emissions data for Utah showing the percentage of emissions from various large-scale industrial facilities based on EPA FLIGHT dataset https://ghgdata.epa.gov/ghgp.

The “45Q tax credits,” named after Internal Revenue Code Section 45Q, are tax credits provided for the capture and either storage or utilization of carbon oxides (CO), which are a more generalized group of gases that includes and is dominated by CO2. These credits were originally established in 2008, reformed in 2018 as part of the Build Back Better Act, and adjusted in 2021 to further incentivize participation in the program. The 2022 IRA makes the following changes to 45Q credits:

In summary, the tax credit value per metric ton of CCUS has increased, more facilities are eligible for sequestration tax credits, DAC is additionally incentivized, and these credits are easier for companies to realize through direct pay, allowing companies to redeem offsets independent of their other tax burden. Combined, these measures may give industrial facilities for steel, cement, refining, and other manufacturing, which produce hard-to-abate CO2 emissions, an economically viable option for CCUS. Although the cost specifics of CCUS are situational, the increased credits give companies the added incentive to market their products as being produced with low or no emissions.

How do these changes impact CO2 storage feasibility in Utah?

With an abundance of sandstone, limestone, and basalt rock layers, Utah has favorable geology for long-term geologic sequestration of CO2 which requires both porous reservoir rock layers into which CO2 may be injected and non-porous confining seal rocks, such as mudstone or salt, that over- lie the reservoir rocks and trap the CO2 in place underground. This geology makes Utah a great location for both adding CCUS facilities to existing infrastructure (such as coal-fired power plants) and developing future industrial facilities close to emissions point sources where sequestration could take place on site. The new IRA provisions increase the potential for CCUS in Utah, specifically:

The 45Q tax credits create more economically viable opportunities for industrial facilities and companies in Utah to reduce emissions and meet the climate goals set forth by the federal government.

How is the Utah Geological Survey involved?

The Utah Geological Survey (UGS) has been involved in CCUS projects since 2003, often partnering with the Energy & Geoscience Institute at the University of Utah. In the past few years, the UGS has contributed geological expertise to Department of Energy-funded grants that assess the viability of geological CO2 sequestration in Utah. Specifically, the UGS is currently performing a statewide assessment of CCUS potential as well as more detailed projects assessing the viability of injection in specific locations. Moving forward the UGS will continue to provide geologic support for feasibility and implementation projects, advance CCUS research, and gather and disseminate information on CCUS opportunities within Utah.