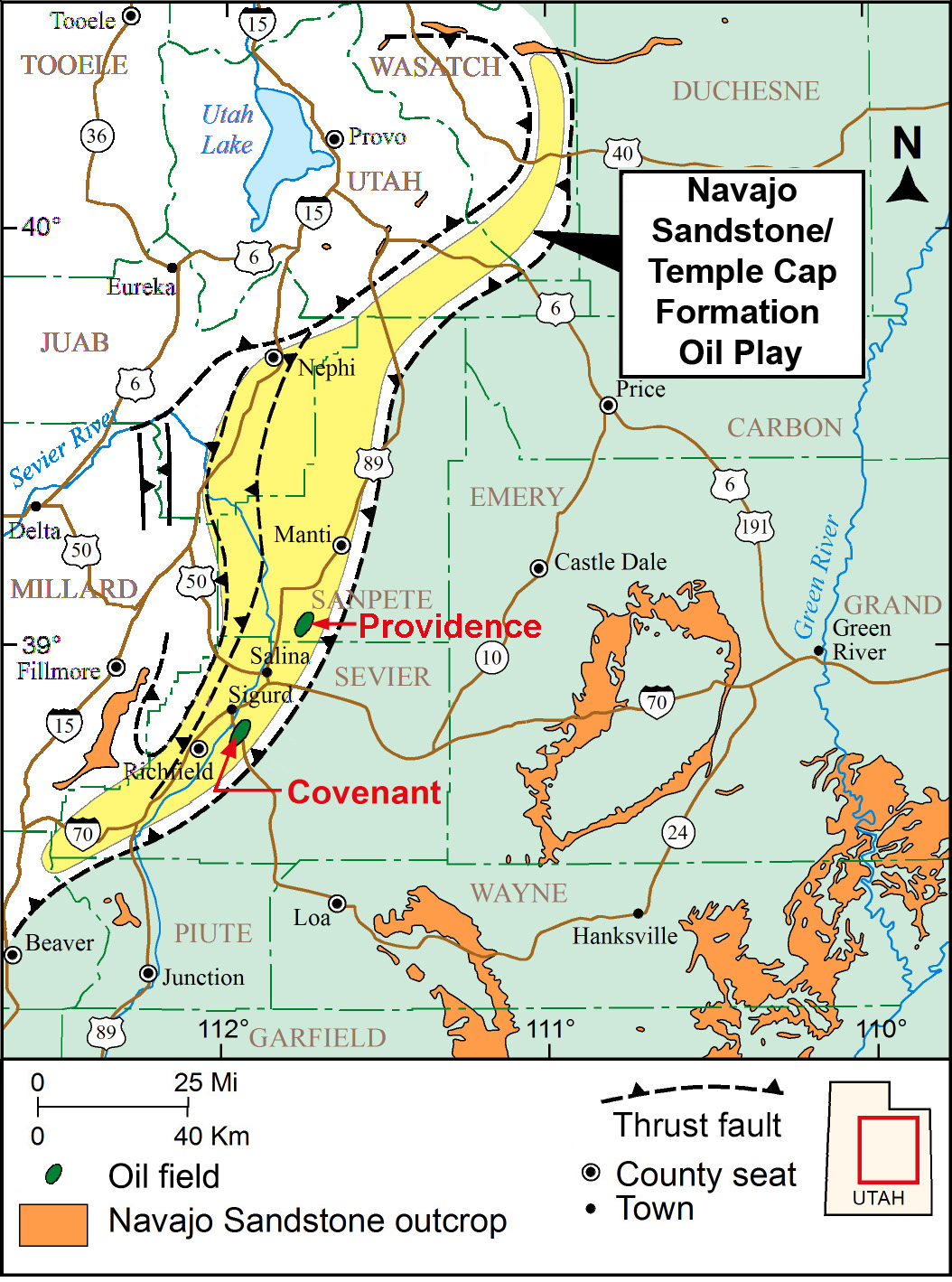 Fifteen years ago Michigan-based Wolverine Gas & Oil Corporation discovered Covenant oil field about 8 miles east-northeast of Richfield, Sevier County, in a region known as the central Utah thrust belt (see Survey Notes, v. 37, no. 2). Over 100 wells had been drilled in the region with no success until the Kings Meadow Ranches No. 17-1 well tested over 700 barrels of oil per day (BOPD) making Covenant the biggest Utah discovery since 1979, when the 129-million-barrel Anschutz Ranch East field was discovered on the Utah-Wyoming border east of Coalville. Although Wolverine attempted to keep the new discovery and oil production rates confidential, it was the worst-kept secret in central Utah. Covenant field is located adjacent to State Highway 24 just a few miles from the small town of Sigurd. The drill rigs, pump jack, oil tank batteries, and assorted oil field equipment were in plain site. Tanker trucks capable of carrying 800 barrels of oil could be observed leaving the field area—and were counted by locals. It was not long before word spread of the new and very significant oil find in a region that had only frustrated geologists for decades. Farmers and ranchers in the area received large cash offers from oil companies to lease subsurface mineral rights (see Survey Notes, v. 51, no. 2). Seismic crews used helicopters, large vibroseis trucks, and dynamite charges set in shallow drill holes to determine the subsurface structural picture by bouncing induced vibrations off the deep layers of rocks. Geologists studied the rock outcrops, re-examined old well data, and generated new maps and cross sections to identify potential traps for oil and gas. Everyone was excited at the prospect of finding similar large oil fields throughout central Utah, including local citizens, Sevier and Sanpete county commissioners, Utah legislators, geologists and oil companies, speculators, and the news media. The Covenant discovery even made the cover of the American Association of Petroleum Geologists (AAPG) monthly news magazine, the Explorer, which is distributed to over 30,000 geologists worldwide.

Over the years, Covenant field has met all expectations. The field has produced nearly 27 million barrels of oil! Thirty-four production wells were drilled in the field, and although Covenant now produces more water than oil (a natural occurrence as oil fields mature), the field still flows over 3,400 BOPD. Oddly, no gas, usually associated with oil, has ever been produced from Covenant 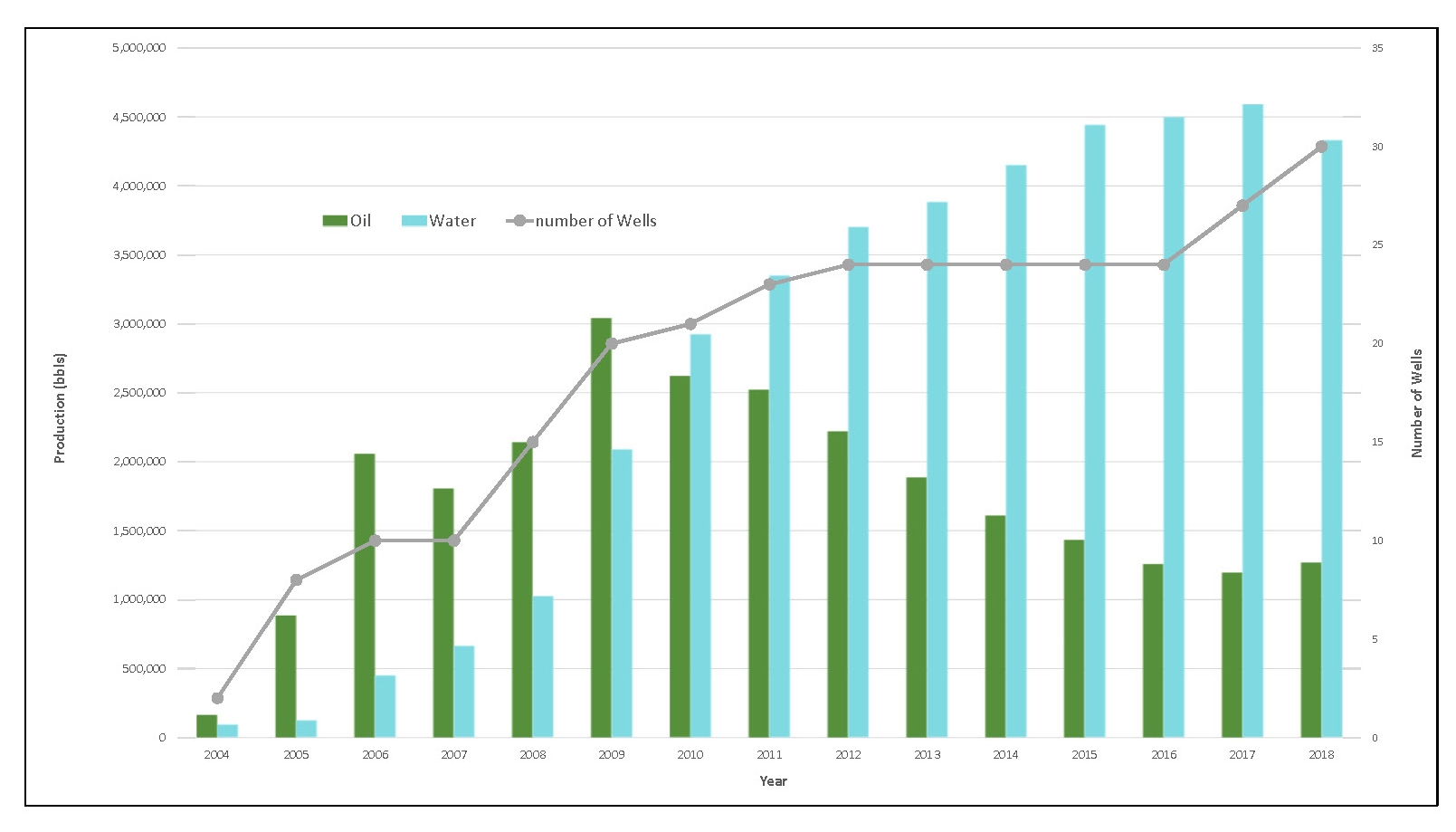 Oil and water production, as well as number of wells, from Covenant field, 2004-2018. Source: Utah Division of Oil, Gas and Mining.

Unfortunately, the search for another Covenant field in the central Utah thrust belt has been unsuccessful with about 30 wells drilled since 2004 attempting to penetrate similar traps of oil; one small field, Providence, about 15 miles northeast of Covenant in Sanpete County, was discovered in 2008 and has produced only about 445,000 barrels of oil from one well. There are several reasons for these disappointing results: (1) the structural targets (traps) were different or more complex than predicted (shallow, contorted layers of Jurassic-age mudstone and evaporite [anhydrite, gypsum, and salt] in the region often make interpretation of the deeper rock configuration extremely difficult), (2) additional potential reservoir rocks outside of the producing formations had low porosity and permeability and thus were unable to store or flow oil, (3) oil migrated from organic-rich source rocks prior to the formation of most traps, and (4) geologists still do not fully understand the petroleum system of the region. The lack of drilling success, the collapse of oil prices in late 2014, and the proliferation of lower risk yet economically viable shale-oil plays (e.g., the Permian Basin of West Texas) has halted almost all exploration in the central Utah thrust belt.

On the positive side, geologists have learned a great deal since the discovery of Covenant field that can be used in future exploration efforts. Initially, oil production was interpreted to be from the Early Jurassic-age (about 190 to 183 million years ago [Ma]) Navajo Sandstone that was deposited in a great sand “sea” or erg, similar to the Sahara (see Survey Notes, v. 48, no. 2). New outcrop work, regional well correlations, and age dating were used to determine that the upper section of what was thought to be Navajo is actually the Middle Jurassic-age (173 to 170 Ma) Temple Cap Formation. The Temple Cap was deposited as coastal dunes (White Throne Member) and associated tidal flats (Sinawava Member) analogous to the modern coast of Namibia of southwestern Africa. The Temple Cap Formation is separated from the underlying Navajo Sandstone by the J-1 unconformity—a time gap of over 10 million years (see Survey Notes, v. 50, no. 1). These units are best observed in outcrops in Zion National Park. To date, Covenant is the only field in Utah that produces from the Temple Cap Formation. Both the Navajo Sandstone and White Throne Member of the Temple Cap Formation have excellent reservoir properties (porosity and permeability) in the field that result in high oil storage and flow capacity. The producing wells in Covenant field are about equally divided between the Navajo and White Throne. Impermeable mudstone beds in the overlying Sinawava Member and anhydrite, gypsum, salt (halite), shale, and mudstone in the Arapien Formation (also Middle Jurassic in age) provide the seals for the underlying reservoir rocks.

The interpretation of the Covenant trap also changed since the field was discovered. The original drilling objective, a “rollover” anticline, was thought to have formed on a typical east-directed thrust splay off a larger, deeper thrust fault (a low-angle fault where older rocks have been displaced by compressional forces over younger rocks). However, when Wolverine drilled an injection well into the Navajo Sandstone to dispose produced water from the field, they encountered the Navajo only once instead of twice as was expected based on the presence of the thrust splay as shown on their cross section. This discovery indicated that the producing anticline was actually created by a west-directed back thrust, a type of structural feature along the regional-scale Sanpete–Sevier Valley anticline and extensively mapped by Utah Geological Survey geologists and others. Furthermore, the back thrust likely developed after an initial anticlinal “paleotrap” and in the process of reconfiguring the structure, any gas associated with the oil leaked to the surface as seeps or migrated to other potential reservoir rocks where it remains to be discovered. 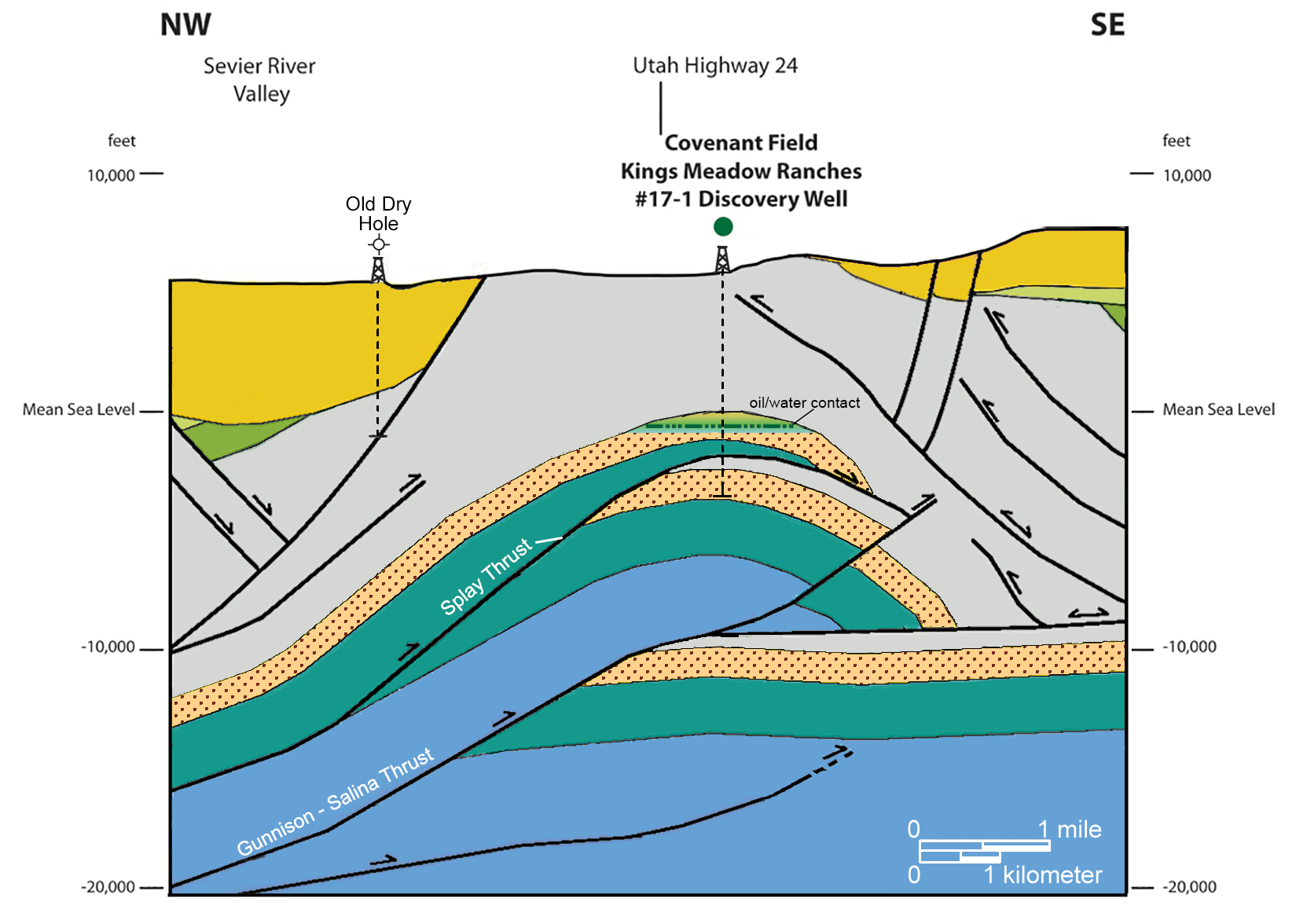 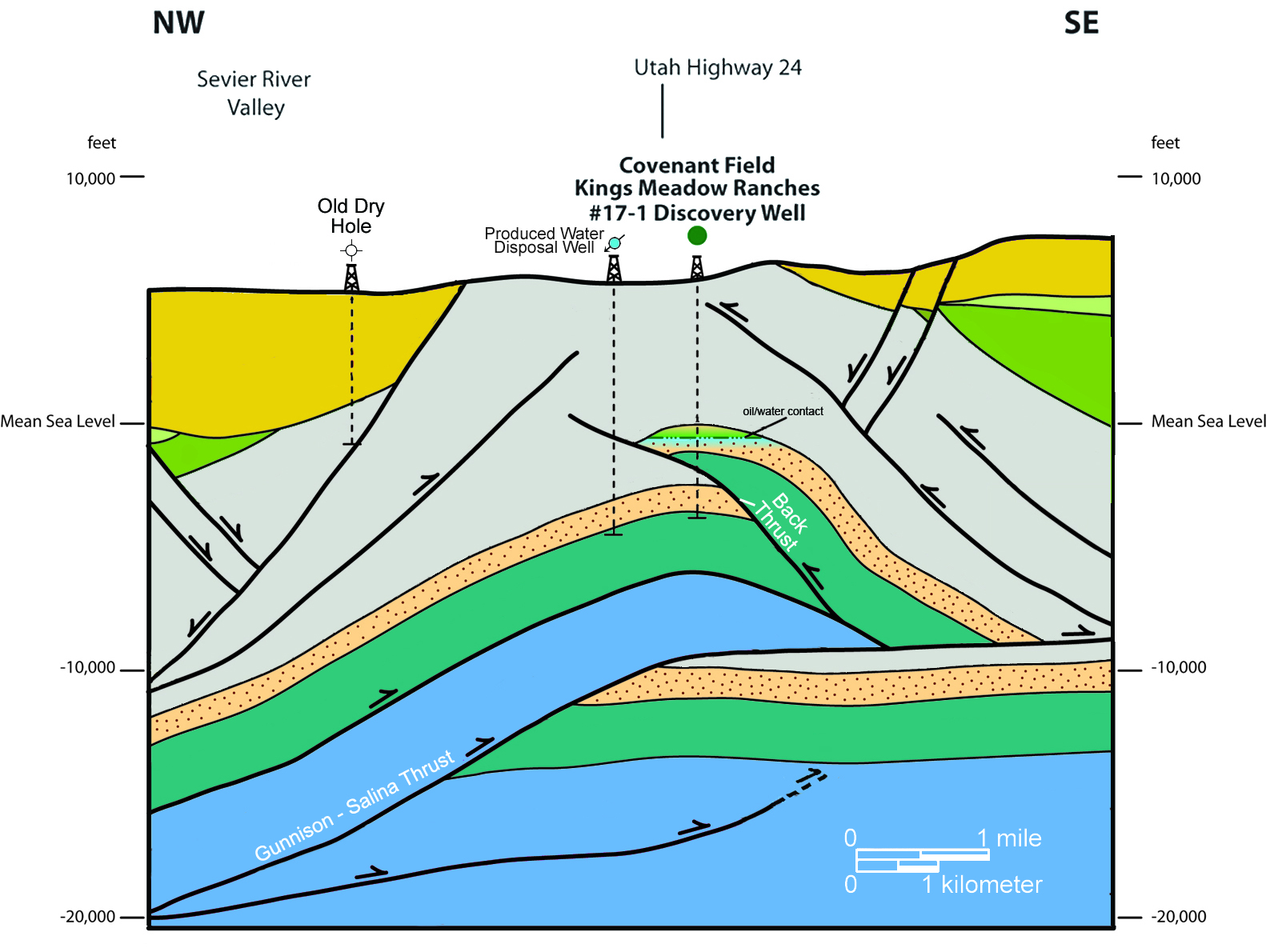 Structural cross sections through Covenant oil field. A. Initial interpretation following the discovery showing a “rollover” anticlinal trap created by a splay thrust off a large, deeper thrust fault. B. Reinterpretation after a produced-water disposal well was drilled showing the anticlinal trap created by a back thrust. Modified from Wolverine Gas & Oil Corporation.

The 2004 discovery of Covenant field proved that the central Utah thrust belt has all the right components for major accumulations of oil: (1) nearby organic-rich source rocks, (2) large but complex traps, (3) high-quality reservoir rocks sealed by overlying impermeable beds, and (4) a complex yet ultimately favorable oil migration history. Although much has been learned over the past 15 years based on the Covenant discovery, it will require higher oil prices, companies and investors willing to take big risks, continued good science, and a bit of luck to find another large field in the central Utah thrust belt. Otherwise, Covenant may remain a “one-field wonder” for years to come.