Groundwater—water that flows in the spaces between rock and soil particles—is vitally important as a pristine drinking water source for Ogden Valley and Ogden City residents. Surface water—water in Ogden Valley’s streams and reservoirs—is equally important to the valley’s residents for irrigation and to Ogden City to supplement its water supply. The two systems are intimately connected in Ogden Valley, as a new study by the Utah Geological Survey (UGS Special Study 165) has revealed.

This new research brought up several important questions about the Ogden Valley groundwater–surface-water system, such as: When a 3-mile reach of stream loses the volume of an Olympic-sized swimming pool every 90 minutes, where does that water go? How can young groundwater be found under a mostly impenetrable clay layer? Should septic tanks continue to be installed for sewage waste disposal in Ogden Valley? This article touches on the answers presented in the new report.

Compared to many watersheds in Utah, Ogden Valley has plentiful water resources. Several large streams drain to Pineview Reservoir, providing most of the valley with adequate irrigation water. The mountains surrounding the valley are composed largely of carbonate and conglomerate rocks that make adequate aquifers, and the principal valley-fill aquifer is thick and productive. However, urban and residential development of agricultural land is causing concern about interference with existing water rights and impacts to water quality. The UGS used state-of-the-art tools to better define the quantity and quality of the groundwater in Ogden Valley and understand the connection between surface water and groundwater. 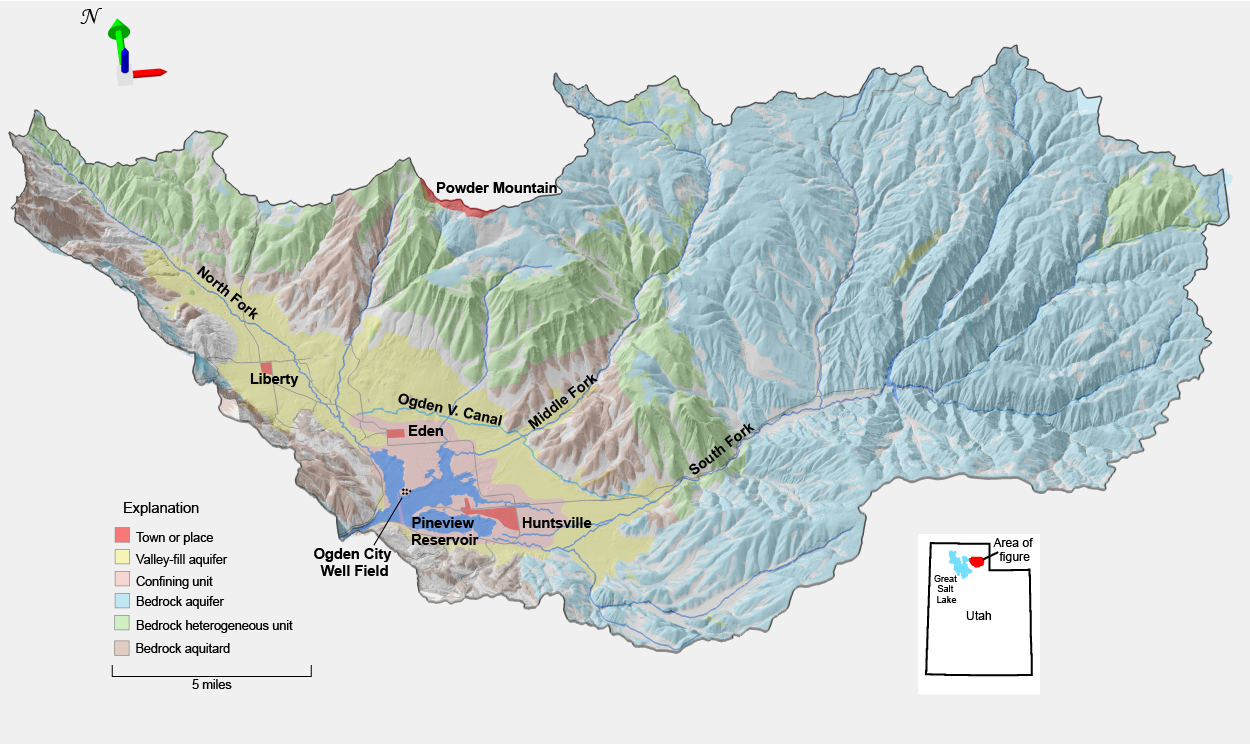 Scientists use stable isotopes of hydrogen and oxygen in water to determine the source of groundwater and how groundwater interacts with surface water. In our study, we analyzed these isotopes in hundreds of well and surface water samples collected at various times throughout the year, which provided enough data to be able to tease out small differences in the stable isotope ratios of waters across the valley. The results show that, on average, roughly half the water in the upper part of the principal aquifer is recharged by precipitation or streams on the valley floor and half comes from recharge high in adjoining mountains. We could see even more detail between sub-watersheds— groundwater underlying the South Fork drainage gets 60 percent of its recharge from surface water, whereas the North Fork drainage gets only about 30 percent from surface water. This quantification will help water managers foresee potential impacts to existing water users if points of water use are moved from one location to another and highlights the need to protect groundwater from contamination that may be present at or near the surface.

The results of seepage runs, in which we measured streamflow at many points along streams and canals to discern where water seeps from the ground into the stream or vice versa, corroborate the findings from the stable isotope research. The boulder and cobble streambed of the South Fork Ogden River is where we measured a volume of water equivalent to an Olympic-sized pool seeping into the aquifer every 90 minutes (17 cubic feet per second or cfs). Aggregating our seepage run data throughout Ogden Valley, we estimate that streams lost on average 12,000 acre-feet of water during baseflow conditions (July through February) and gained 15,000 acre-feet during spring runoff. The Ogden Valley Canal loses about half its flow during the height of the irrigation season, and that water recharges the principal aquifer. This dynamic interplay between streams and groundwater is possible because the water table fluctuates near the base of the stream channels. A lowered water table resulting from increased pumping or reduced streamflow could have negative impacts to the system, shunting water Gaining (blue) and losing (red) reaches of major streams during a March 2016 seepage run and estimated net gain or loss from March through June (runoff season) from three sub-basins. During baseflow, nearly all the gains estimated during the runoff season, shown here, are lost back to the aquifer. The streams and aquifers are actively exchanging water but are generally in balance each year. that currently flows to the shallow unconfined aquifer and Pineview Reservoir to deeper parts of the confined aquifer. 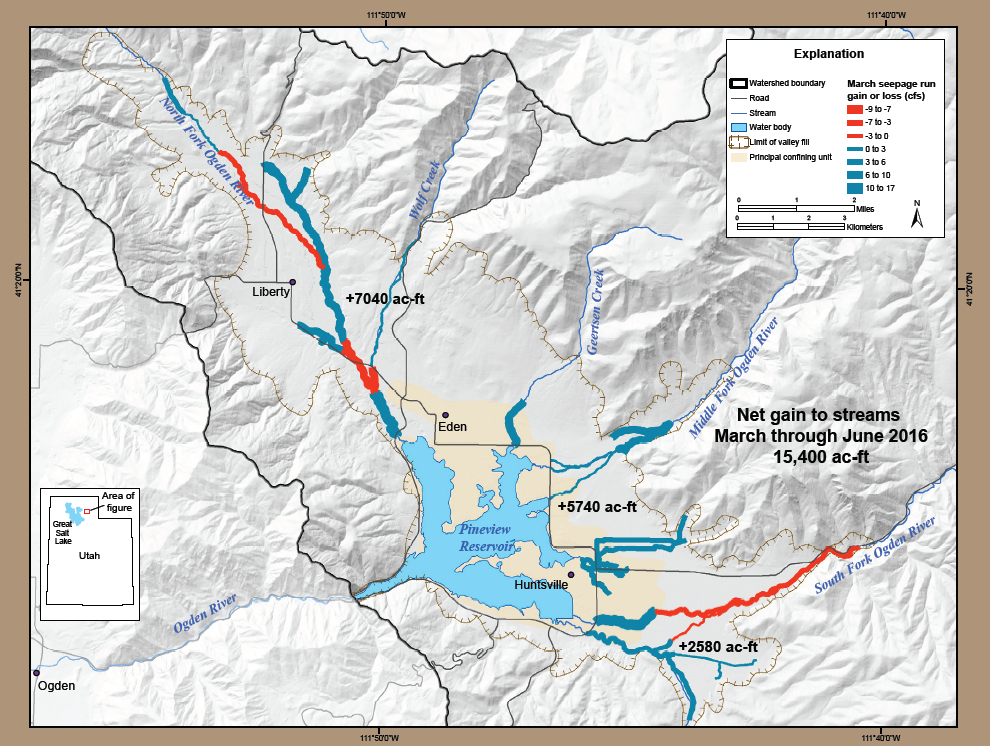 Gaining (blue) and losing (red) reaches of major streams during a March 2016 seepage run and estimated net gain or loss from March through June (runoff season) from three sub-basins. During baseflow, nearly all the gains estimated during the runoff season, shown here, are lost back to the aquifer. The streams and aquifers are actively exchanging water but are generally in balance each year.

The Ogden City well field, located on a peninsula surrounded by Pineview Reservoir, has reliably produced water for a century. The wells are completed in a confined aquifer separated from the overlying reservoir and shallow aquifer by a silt and clay unit that is as much as 120 feet thick. The silt and clay confining unit would typically be expected to isolate the well field from surface water and shallow groundwater, but our samples revealed concentrations of an environmental tracer that indicate a good fraction of the well water was recharged to the aquifer less than 50 years ago. Also, the stable isotope ratio in the well water is more like that of shallow wells in the unconfined part of the aquifer than expected given the well field’s depth and location, corroborating a nearsurface recharge source. Recharge could travel relatively quickly through leaking abandoned well casings in the bottom of the  reservoir, leakage through thinner parts of the confining unit, or from the west where the distance from the edge of the confining unit to the well field is shortest. This finding illustrates that water in the confined aquifer could be vulnerable to surface contamination. 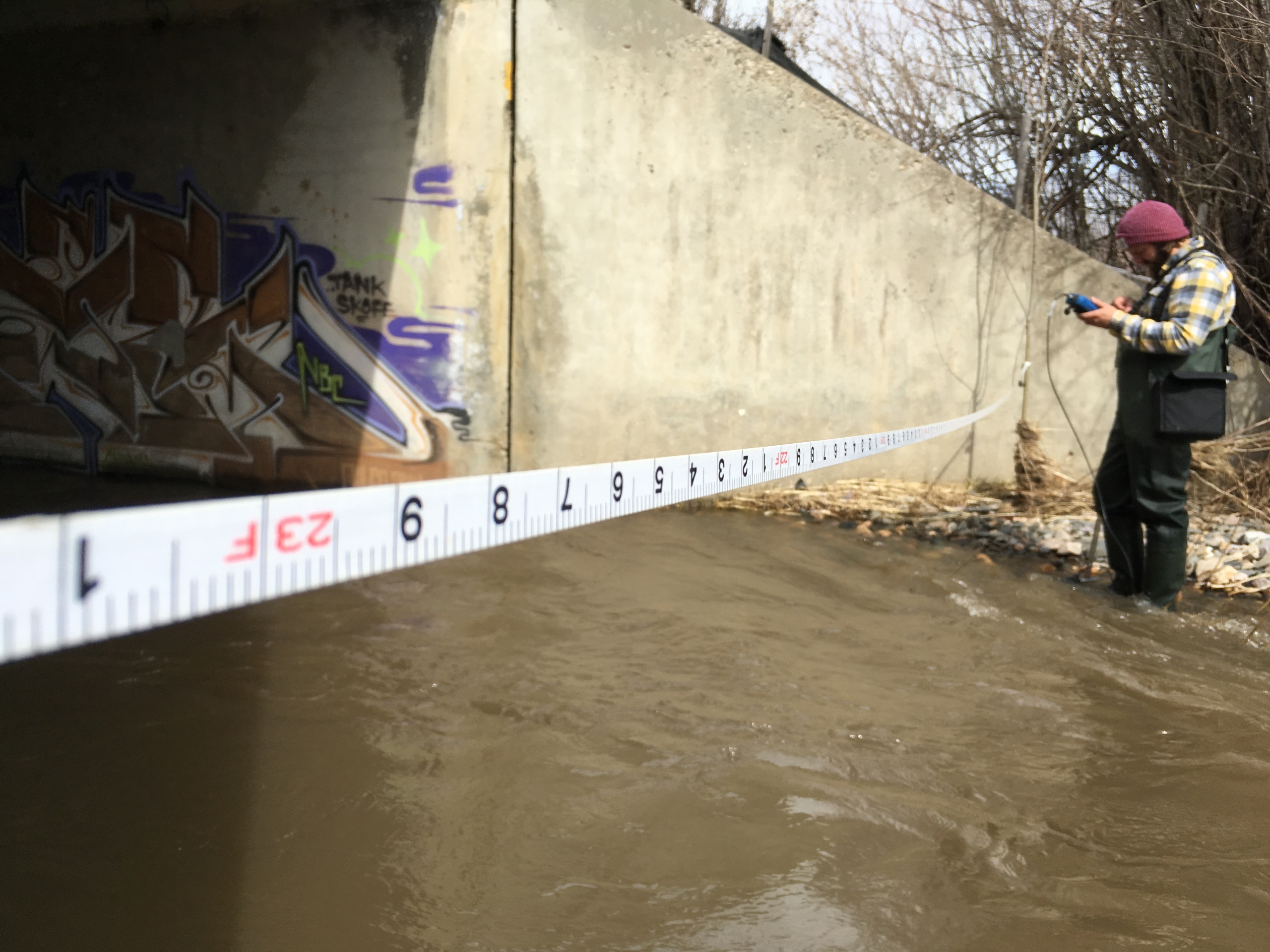 A UGS scientist measures streamflow during the March 2016 seepage study.

Hydrogeologists quantify the amount of groundwater in an aquifer system using groundwater budgets. Because directly measuring groundwater flow under the earth’s surface is impossible, we make budgets using atmospheric, streamflow, and pumping data, usually entered into a computer model that can help us quantify the volumes of water moving through different parts of the aquifer. Our water budget calculations show that the watershed receives about 540,000 acre-feet of water from precipitation on an average year. Much of that is lost to evaporation before it enters the groundwater system, leaving about 160,000 acrefeet of water to interact with streams and aquifers. The South Fork sub-basin, because it is the largest in area, has the largest percentage of the total budget. Groundwater in the valley-fill aquifer system is a fraction of the total budget. Roughly 67,000 acre-feet of water recharges the valley-fill aquifers each year. Recharge to the valley-fill aquifers is roughly one-third each from precipitation, seepage, and mountain block recharge. Roughly half of the discharge from the valley-fill aquifers flows to Pineview Reservoir, a quarter discharges as baseflow to the streams as they cross the valley fill, and most of the remaining discharge is pumped from the confined aquifer at the Ogden City well field. Recharge and discharge are generally in balance in Ogden Valley.

Most homes and businesses in Ogden Valley use septic tank soil absorption systems for indoor wastewater disposal, which add nitrogen and other waste products to the environment. The UGS evaluated the impact of septic tanks on Ogden Valley’s groundwater in 1998 and recommended that lot sizes be at least 3 acres to limit the increase in mean nitrate concentration to 1 milligram per liter (mg/L) over the thenmean concentration of 0.74 mg/L. In our current study, we found that the geometric mean nitrate concentration in the unconfined valley-fill aquifers (the aquifers that receive the bulk of septic-tank leachate) was 1.43 mg/L, still well below the allowable drinking water maximum limit of 10 mg/L, but clearly higher than in 1998. Our updated recommendation, using a smaller groundwater flow volume than was used in the 1998 study, is 4.4 to 5.8 acres minimum per system. Advanced removal septic tank systems, lagoon systems, or sewage treatment plants are options that could be used to protect Ogden Valley’s water quality if planners want to allow higher density housing development.

These are just a few of the new details we learned about the watershed and groundwater of Ogden Valley. The new 222-page report will be a useful tool for policy makers and water users to understand the potential effects of current and future water use on water supply and the environment of Ogden Valley. 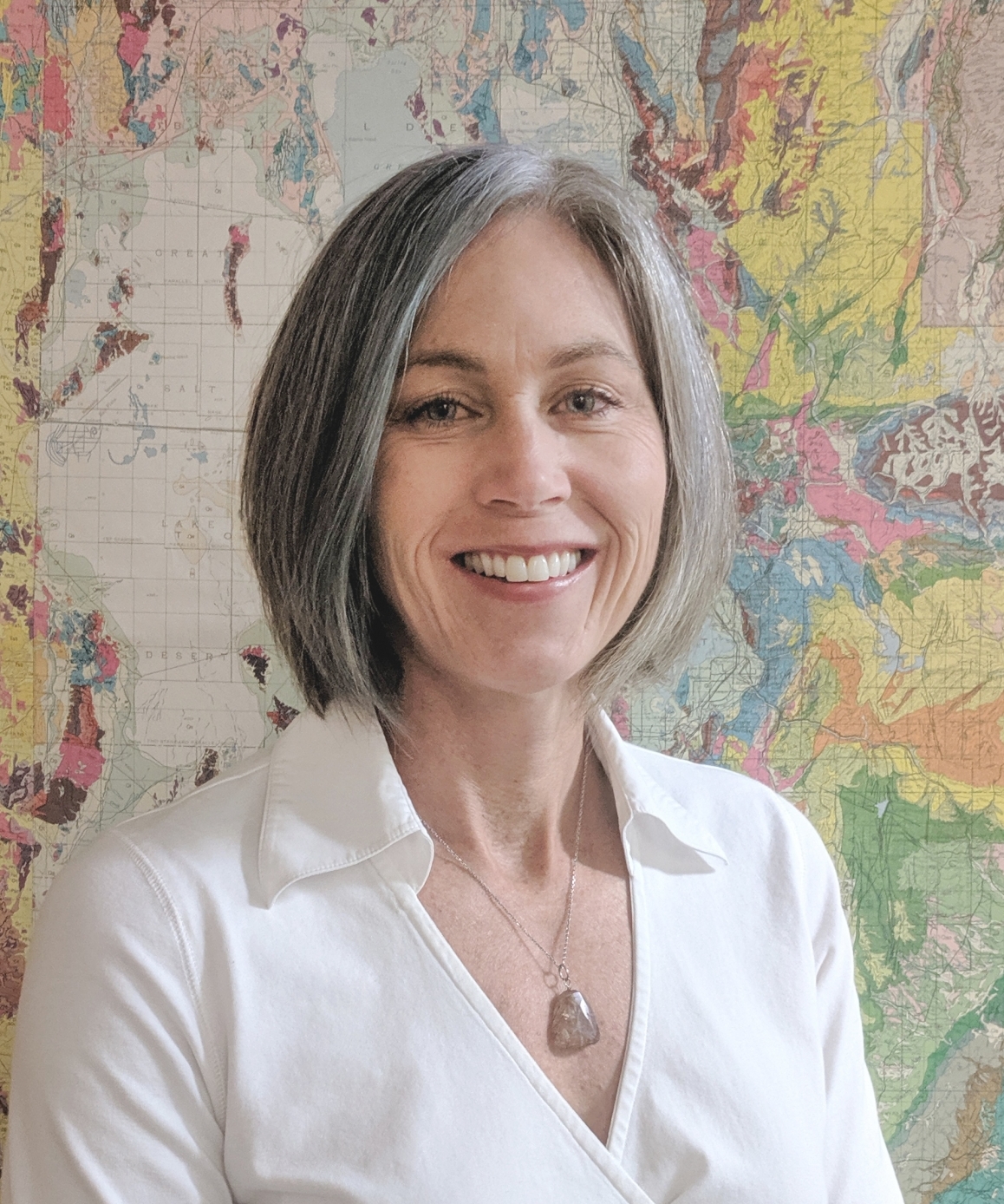 is a senior geologist in the Utah Geological Survey’s Groundwater and Wetlands Program. Lucy’s work with UGS over the past 15 years has focused on water-resource assessments in Utah, including water-quality studies, aquifer testing, well drilling, spring and wetland inventories, and nitrate- and salinity-compromised groundwater systems. She is currently managing a real-time surface-water flow monitoring program in western Utah and is involved in quantifying hydrological changes in small watersheds undergoing wildlife habitat restoration projects in Utah.