Traveling through the seemingly endless Great Basin Desert in western Utah, an unusual sight suddenly appears as you pass yet another mountain range. As if teleported from another dimension, the other side of the expansive valley holds a bright white, glowing mountain nestled between brown, red, and gray cliffs. How does such a striking, isolated dome form in the middle of the desert? Clues to the geologic story of Crystal Peak come from the volcanic rocks of the Tunnel Spring Tuff, major tectonic events of the region, and the cavernous structures called tafoni that cover the mountain from top to bottom.

View to the east of Crystal Peak. The glowing quality of the peak is due to the high concentration of quartz crystals in the Tunnel Spring Tuff. The peak is more resistant to erosion than the surrounding areas making it prominent.

The white, sparkly rock of Crystal Peak is called the Tunnel Spring Tuff. It is a rhyolitic ash-flow tuff made of pyroclastic debris from an explosive volcanic eruption. The composition of the tuff is a mixture of ash, pumice, glass shards, minerals, and abundant rock fragments of limestone, sandstone, shale, and dolomite. The white color of the rock comes from its concentration of ash and pumice. The mountain’s name derives from the abundance of crystals mainly quartz, sanidine, plagioclase, and minor biotite— that cause the mountain to sparkle. The quartz crystals in the Tunnel Spring Tuff have well formed points on both ends— referred to as double terminated—making this formation easily identifiable. These 3-millimeter-long (1/8 inch) crystals are best seen with a hand lens or magnifying glass and are clear or smoky gray in color.

The geologic story of Crystal Peak starts with the erosion of Paleozoic-age sedimentary rock layers called the Pogonip Group. The formations in the Pogonip Group consist of limestone, sandstone, shale, and dolomite. They range from 382 to 485 million years old and collectively are about 1,000 meters (3,300 feet) thick. These formations are the source of the sedimentary rock fragments in the Tunnel Spring Tuff; the fragments are known as xenoliths, literally “foreign stone,” from the Greek “xenos” (foreign) and “lithos” (stone). The Pogonip Group was eroded when a river system carved a deep stream valley over a span of millions of years (block 1).

During the Oligocene Epoch, about 33 million years ago, an explosive volcanic eruption threw large amounts of ash, pumice, and rock into the air that rained down covering large areas of land. The volcanic ash and other material settled in topographic low areas like the stream valley eroded into the Pogonip Group, eventually forming the Tunnel Spring Tuff (block 2). The rock fragments in the Tunnel Spring Tuff are likely derived from the caldera walls from which the volcano erupted.

After the deposition of the tuff, north-south trending normal faults, associated with Basin and Range extension, cut the landscape. As the crust was extending, uplifted fault blocks (horsts) and down-dropped fault blocks (grabens) broke apart the former Pogonip stream valley now filled with the Tunnel Spring Tuff (block 3). Sections of the former stream valley were uplifted while neighboring areas were dropped down.

Over time, erosion started to affect the horsts, filling the grabens with sediment. The Pogonip Group, made up of softer sedimentary rocks, eroded more quickly than the resistant ash-flow tuff. A ridge of Tunnel Spring Tuff thus formed, while the adjacent Pogonip Group rocks eroded down to a lower elevation. An inverted valley was created whereby the original topographic lows became the topographic highs and vice versa (block 4). Today, most of the Tunnel Spring Tuff has been eroded away and only occurs in a handful of locations in southwestern Utah. Crystal Peak is the thickest remaining section of the Tunnel Spring Tuff (block 5).

Tafoni (also called honeycombs, alveoli, and stonelace) cover the surface of Crystal Peak. They are characterized by clusters of holes and recesses formed from cavernous weathering. The tafoni on Crystal Peak completely cover the steep sides, creating a “swiss cheese” texture on the surface. They are actively forming today as the Tunnel Spring Tuff continues to weather and erode. 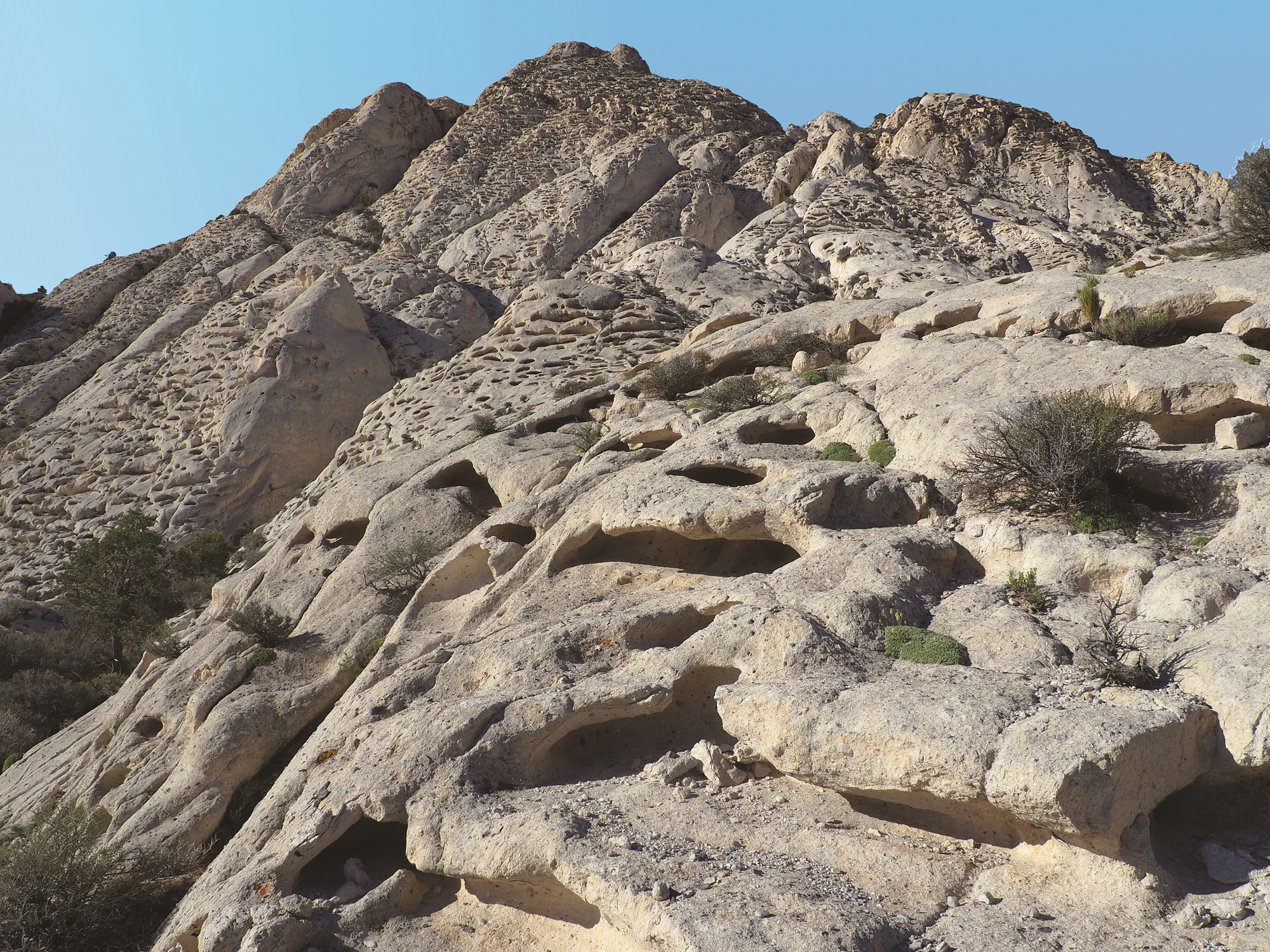 Tafoni vary in size, with some of the largest cavities being over 2 meters (6 feet) wide. The tafoni cover most of the steep sides on Crystal Peak.

Tafoni form in a variety of environments and rock types but are most common in salt-rich desert environments and coastal areas. The composition of the rock plays the most important role in tafoni creation. The Tunnel Spring Tuff is poorly welded and thus somewhat porous and permeable. As weathering occurs, rainwater containing carbonic acid (H2CO3) infiltrates the tuff and travels through the pore spaces.

The absorbed water moves via capillary action. In this case, it means using the walls of the small spaces to propel the water horizontally through the rock body. The acidic water in the pore space dissolves limestone and dolomite rock fragments as it moves through the rock. The water eventually evaporates, leaving calcite (CaCO3) behind.

This dissolution starts a process called salt weathering. Although usually facilitated by the minerals gypsum or halite, the salt weathering that initiates tafoni formation at Crystal Peak is driven by the crystallization of calcite (CaCO3) precipitated from water. Calcite crystallization can generate a pressure of 10 atmospheres, a pressure strong enough to break rock grains and walls of the pore spaces, expanding the open area in the rock. The process feeds on itself as larger tafoni help regulate humidity and temperature, promoting more crystallization and subsequent weathering. The pore spaces grow into cavities and continue to increase in size.

Research shows that the cavities are spherical until they reach about 20 centimeters (8 inches) in diameter. The width then increases faster than the height and depth and they become elongated cavities. The average width of the tafoni at Crystal Peak is 2 meters (6 feet) but varies considerably. The spacing of the tafoni is a mystery as they do not follow any significant pattern or condition for their placement on steep rock faces.

Researchers will doubtless learn more about Crystal Peak and its tafoni, but time is not unlimited. In another million years, Crystal Peak, the Tunnel Spring Tuff, and the cavelike tafoni may be completely eroded away and replaced with a new geologic mystery, erasing the last piece of evidence for the ancient stream valley and violent volcanic events that occurred in this remote western desert of Utah. 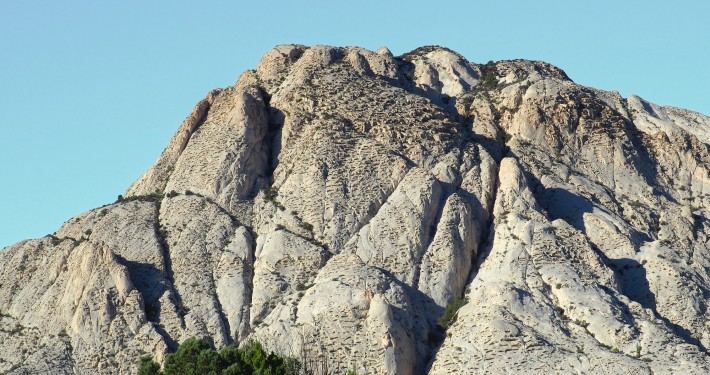 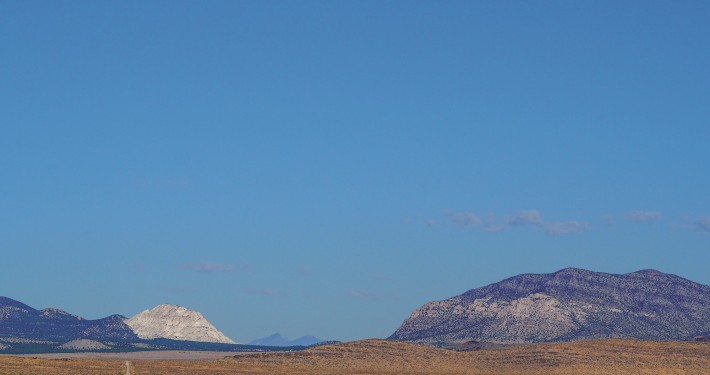 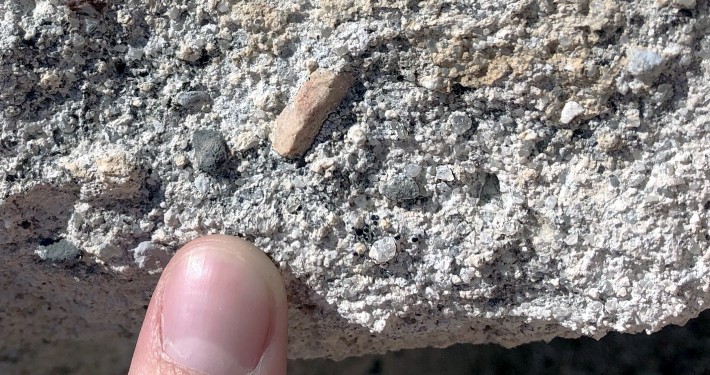 The roads leading out to Crystal Peak are well-maintained gravel and dirt. A four-wheel-drive vehicle is not necessary but may reduce travel time. Travel is  not recommended in winter or in bad weather conditions. There are no parking areas or facilities at Crystal Peak so use caution when parking on the shoulder and be prepared with plenty of water, food, sun protection, and fuel. 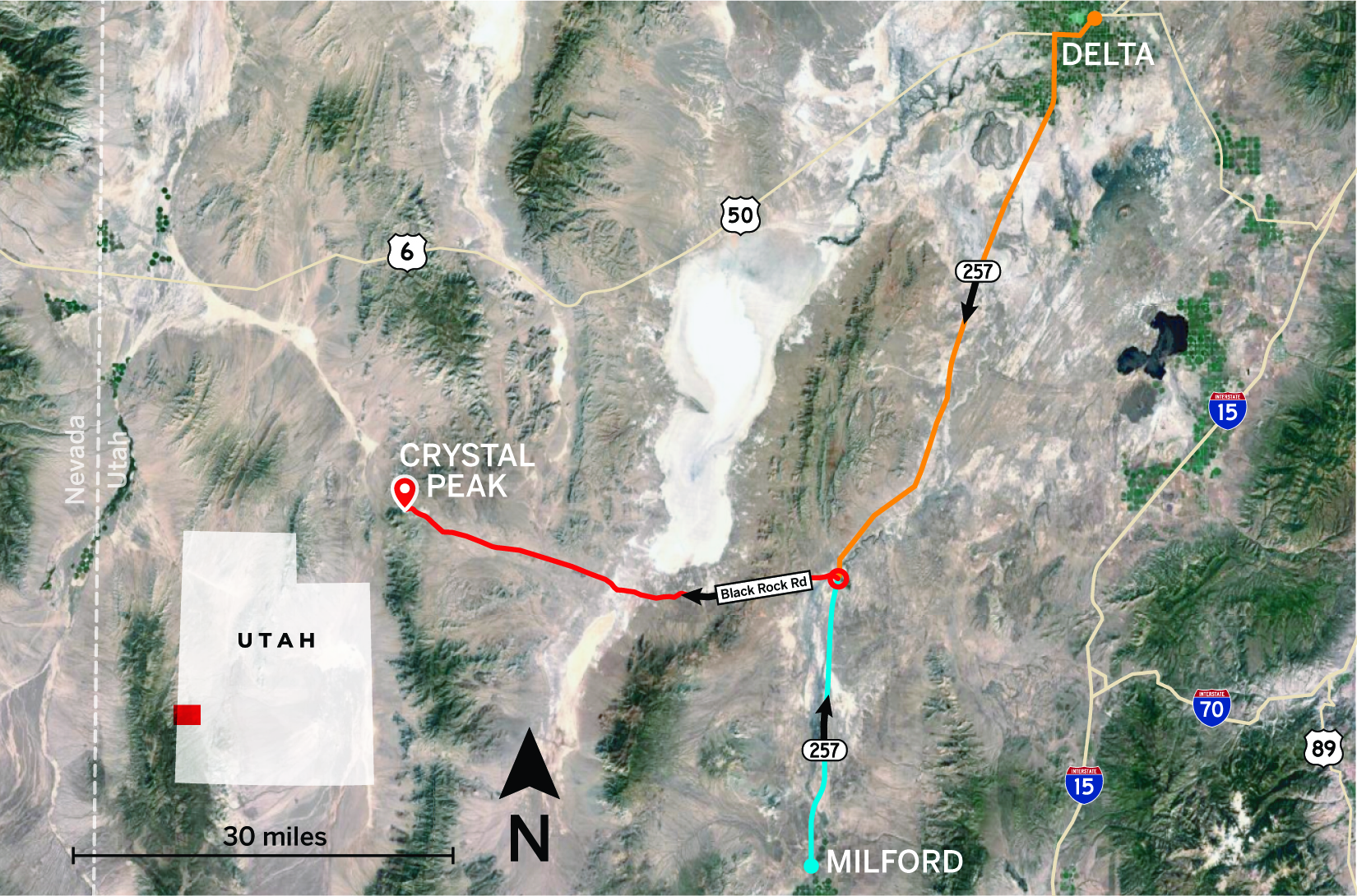