Is There a Wetland on Your Property? Identification and Next Steps

The most common question we are asked in the Groundwater Program’s Wetlands Section is, “I’m thinking of buying a property but it may have wetlands on it. How do I know and what will this mean for me?” Wetlands and other aquatic features like streams and lakes are protected under the federal Clean Water Act, legislation passed in 1972 to address the rampant dumping of sewage, industrial chemicals, and other pollutants into our nation’s waters. Wetlands are integral to water quality protection because they can detain or transform pollutants that come from upland areas, thus preventing the runoff from reaching our streams and lakes. Wetlands provide a broad range of other important functions as well, including flood storage, erosion control, natural groundwater recharge areas, and wildlife habitat, as well as economic and recreational values.

Spring-fed wetland behind a residential area in Francis, Utah

Wetlands are areas that are flooded or saturated for at least part of the growing season, the period between spring and fall when plants and soil microbes are most active. Some areas are obviously wetlands — marshes with standing water or waterlogged meadows that feel squishy with each step. However, many wetlands in Utah are only wet for a short period of time in the spring and might not even be wet every year, especially during periods of drought. The U.S. Army Corps of Engineers (Army Corps), the lead regulatory agency for wetland permits in Utah, looks at three factors to determine whether an area is a wetland: (1) evidence of wetland hydrology (e.g., water or signs of water such as sediment deposits, dry algae, soil cracking, flow patterns), (2) abundance of wetland-associated vegetation (obvious species such as cattail and bulrush, but also many grasses, sedges, and other plants), and (3) hydric soil indicators (distinct soil textures and colors that form in soils that are frequently saturated). Many wetlands are tough for non-experts to identify, particularly during a drought year or in the middle of the summer.

Two good online resources can aid your investigation — the U.S. Fish and Wildlife Service’s (USFWS) National Wetland Inventory (NWI) and the Natural Resources Conservation Service’s (NRCS) National Cooperative Soil Survey. NWI data show the distribution of wetlands and other aquatic resources and the soil survey data indicate whether map units have hydric soils (e.g., soils that form in wetland conditions). However, both sets of data have their limitations. NWI data are mapped using aerial imagery with minimal field verification and may miss some wetlands entirely, and soil survey data provide information on the percent of a map unit that has hydric soil, not the exact location of areas with hydric soils. Furthermore, both sets of data are out-of-date in much of Utah and show approximate rather than exact boundaries. 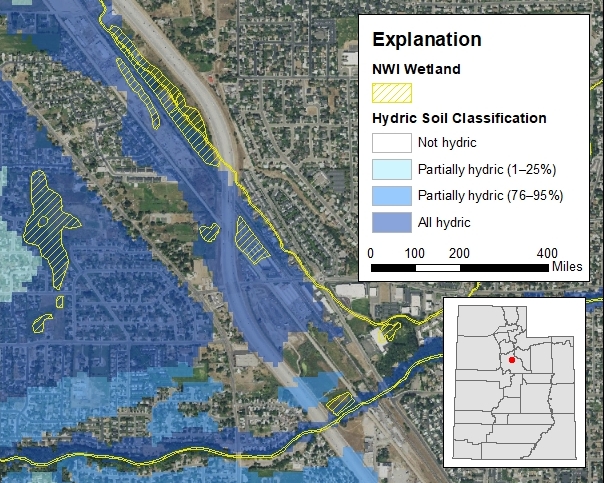 If you have any reason to believe there may be wetlands on a property you are considering developing, you may want to consult with the local office of the Army Corps to discuss your plans, possible impacts to wetlands and other aquatic resources, and if those resources fall within the regulatory jurisdiction of the Army Corps. They may recommend hiring a consultant to conduct a delineation to determine exact wetland boundaries and identify other aquatic resources that might be regulated under the Clean Water Act. If a permit is required, the Army Corps can walk you through what the permitting process will look like for your project. Nationwide, the Army Corps denies only 3 percent of requests for permits, but obtaining a permit will add time and cost to a project, including consulting fees for aquatic resource delineation and permit preparation and mitigation costs to compensate for impacted resources.  You also may want to find out if your local planning department has any restrictions, such as setback requirements between development and aquatic resources. If you are concerned about wetlands on agricultural land, the NRCS can conduct a delineation on the property and help you understand the applicable regulations for agricultural use.

While the UGS does not have a regulatory role in the wetland permitting process, we are working to update NWI data to provide the public with more current and spatially accurate information on the location and extent of wetlands in Utah. We have completed mapping projects in the Upper Bear River (see Survey Notes, v. 49, no. 1), on the east shore of Great Salt Lake, and around Bear Lake and have ongoing projects in the Uinta Basin and Cache County. We also maintain a web application that displays NWI data for the state with other supporting data layers to make it easier for people to find out what is mapped on their property. While the mapping work we do will never replace the need for precise field delineations, it is an important tool for conducting preliminary screenings of areas to determine whether potential wetland issues might exist.