by Ben A. Erickson, Jessica J. Castleton, and Adam I. Hiscock 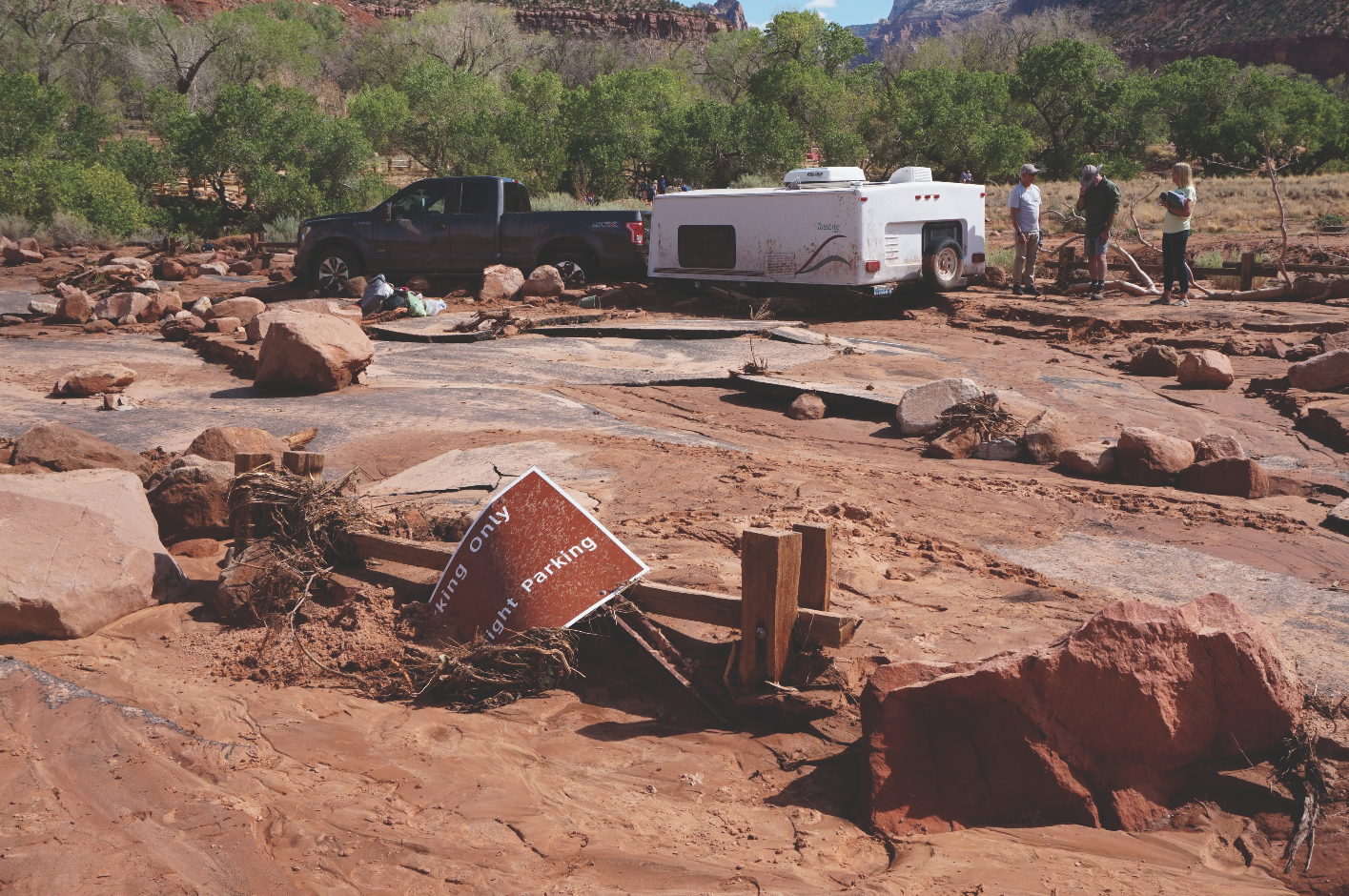 The UGS recently had the opportunity to conduct an sUAS survey for the National Park Service at Zion National Park (ZNP). With annual visitation at ZNP exceeding 4 million in recent years and only dropping to over 3.6 million in 2020, the likelihood of geologic hazards affecting park visitors and infrastructure continues to rise. In the summer of 2021, and at the request of ZNP, the UGS conducted multiple sUAS investigations to evaluate the extent of severe flooding that occurred during that summer. This investigation followed a similar one we conducted for ZNP in the summer of 2019 for the Cable Mountain rockfall. The use of the sUAS can provide data for future flood mitigation designs and determine the measures needed to mitigate the risk associated with the remaining material from the rockfall event, as well as determine future safety. Drone use is currently restricted within all U.S. national parks (and always prohibited for private citizens without proper permitting). However, the UGS and ZNP were granted emergency authorization allowing the drone flights.

On June 29, 2021, an intense monsoonal rainstorm occurred in the early afternoon, resulting in sheet flooding, channel flow, canyon debris flows, and flash flooding of the Virgin River. A weather station located within ZNP recorded 1.16 inches of rain within a two-hour time span with 0.7 inches recorded in the final hour. The total rainfall recorded for the day was 1.18 inches. The ZNP South Gate, part of Utah State Route 9, and the Park Transportation, Inc. (PTI) areas, including shuttle and oversized parking areas, experienced an intense, ten-year flooding event, resulting in the closure of their respective services. Cleanup and repair lasted several weeks after the event. Fortunately, no injuries were reported, but the park and the nearby community of Springdale, Utah, had extensive flood damage.

The UGS evaluated the impacted areas and created a flight plan for optimal coverage of the area. The drone is equipped with a 1-inch CMOS Hasselblad camera and Global Navigation Satellite System (GNSS). The imagery data gathered by the sUAS flights and GNSS points were combined to generate a structure-from-motion (SfM) three-dimensional model using Agisoft Metashape software, on which digital measurements and mapping were performed. The SfM model also includes point cloud data, similar to lidar elevation data. Using CloudCompare and ESRI’s ArcGIS Pro software, we compared our model to 0.5-meter lidar elevation data acquired by ZNP in 2015. By comparing the model and lidar, we were able to detect changes in erosion and deposition of sediments in the area between 2015 and 2021.

The differencing results of the 2021 SfM model and 2015 lidar data show where erosion from water flow channels occurred and the areas where sediments carried by the flood water were deposited. In the figures below, blue indicates where erosion has occurred and red indicates where deposition has occurred since 2015, whereas yellow indicates no change since 2015. Some areas near the PTI maintenance building and shuttle parking area appear to have unexpected, widespread erosion since 2015, perhaps due to a registration error with the lidar data; however, additional analysis would be necessary to evaluate the erosion anomaly.

Volume calculations also can be performed on areas of interest to determine the amount of material that was removed or added (see bottom figure). Based on the volume calculations, more deposition took place within the area where the drone was flown, compared to erosion, with about 47,816 cubic feet of material added and 35,491 cubic feet of material removed. Much of the deposition occurred in drainages and on floodplains leading to the North Fork of the Virgin River. Road culverts and parking lots were also inundated with deposition of mud and debris. The prevalence of deposition within the flight path indicates much of the erosional process took place at higher elevations outside of the imaged area. Areas that experience erosional scouring are also hazardous and can impact infrastructure, such as exposing buried pipelines, undermining foundations, and causing pavement to move. 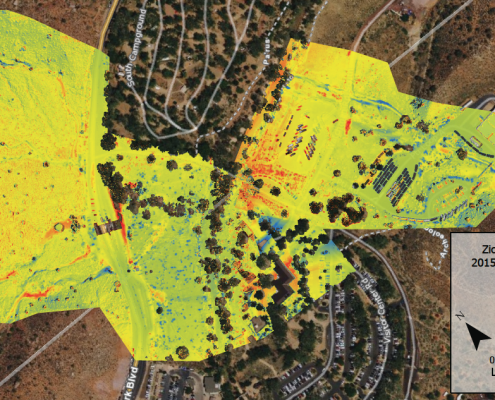 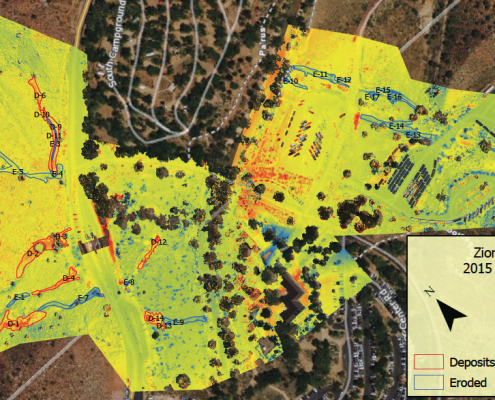 Cable Mountain rock avalanche source area outlined in yellow; the scar measures approximately 133 feet wide, between the white lines, based on the SfM orthomosaic image. The volume of the rock avalanche was calculated to be 435,712 cubic feet, with a corresponding mass of approximately 31,292 tons. Photo date: October 24, 2019.

The popular Weeping Rock Trail is still closed due to this large-scale rock avalanche. Another large rock slab having void space behind it, like the slab that fell, is located to the northeast on the Cable Mountain cliff face. This slab was investigated due to its proximity to the failed slab’s scar; however, fractured rock slabs that pose a rockfall hazard are located all along the cliff face. The acquired sUAS imagery data show these large rock slabs are highly fractured and semi-detached, bulging away from the cliff face. Using differencing between the 2015 lidar elevation data digital terrain model (DTM), point cloud data, and our sUAS model, we were able to estimate deposition depths to assist ZNP in developing a mitigation plan. We later returned in July 2021 and performed an additional flight to compare with the 2019 sUAS data. The results provided change information showing areas that have experienced erosion and deposition in the two-year timeframe.

The use of sUAS within the UGS Geologic Hazards Program has become a vital tool in the assessment of geologic hazards. It has provided a means of increasing the evaluation of hazards and improving detail, while increasing the safety of our geologists at minimal expense. The utilization of sUAS has been incorporated in multiple types of geologic hazard responses, including landslides, flooding, fire-related debris flows and rockfalls, rock avalanches, fault mapping, sinkholes, fissures, subsidence, earthquakes, and the clarification of general hazard mapping. Future deployment of sUAS within the UGS is anticipated to increase. The addition of other sensing tools like thermal cameras, multi-spectral cameras, and lidar sensors would increase the capabilities, demand, and quality of the resulting analysis products the UGS provides. The UGS has just started enabling the capabilities of using sUAS and looks forward to future applications to help us better understand Utah’s geology and hazards. 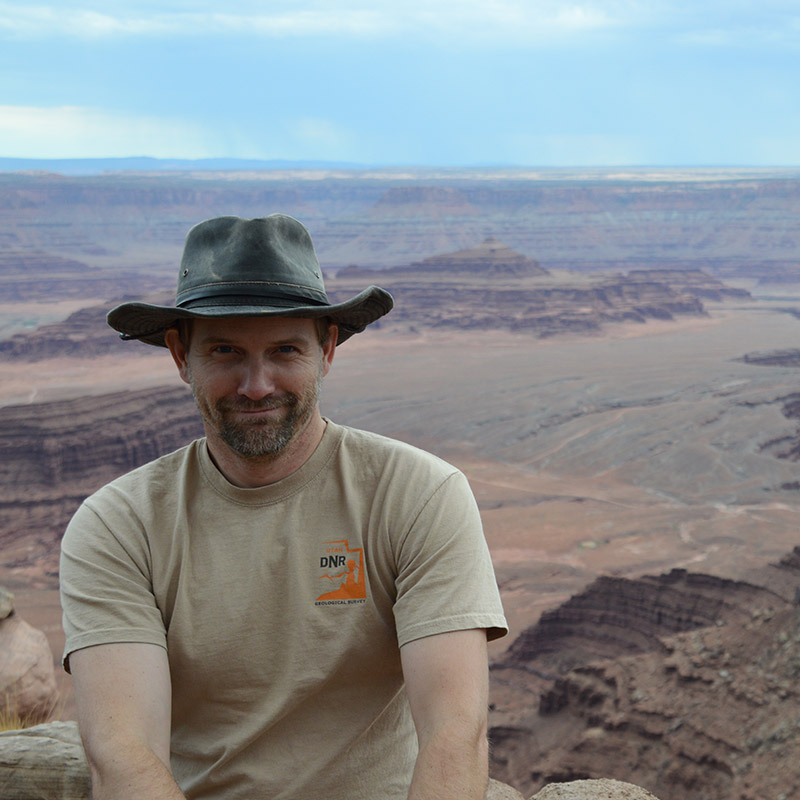 is a Project Geologist with the Geologic Hazards Program who joined the Utah Geological Survey in 2011. He is a Utah native and has a B.S. degree in earth science from Utah Valley University and an M.S. degree in geological engineering from the University of Utah. Ben works to share knowledge of geologic hazards through mapping and working with communities. His role in emergency response ranges from logging digital data to explaining geological hazard conditions to local communities, civic leaders, and the media. 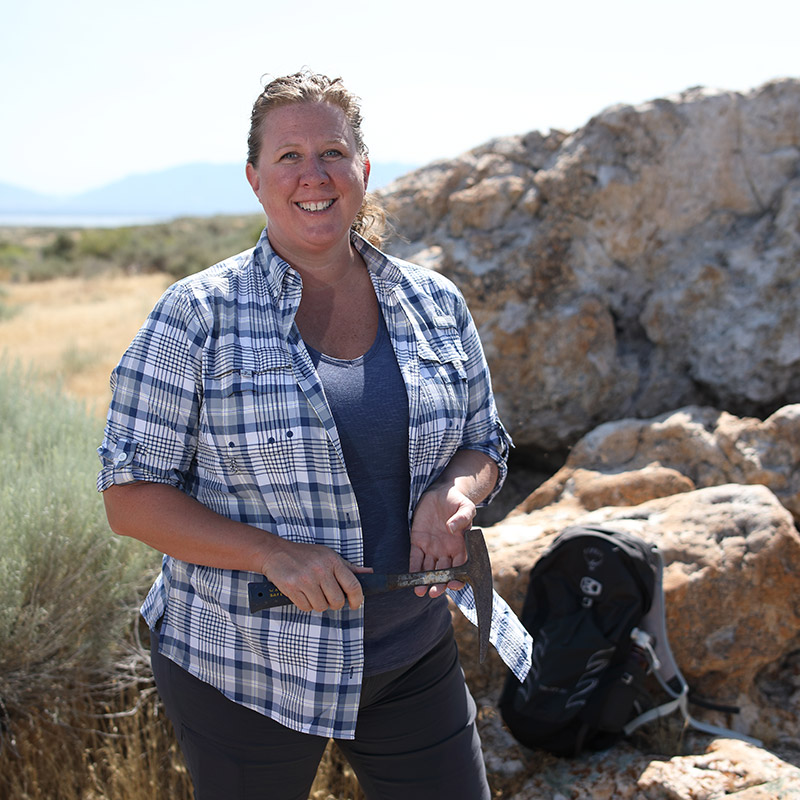 is a Senior Geologist with the Geologic Hazards Program. She earned a B.S. degree in applied environmental geoscience from Weber State University in 2005 and an M.S. degree in engineering geology from the University of Utah in 2015. In addition to mapping hazards, Jessica responds to debris flows, floods, and other geologic hazard events, and provides outreach for communities to inform about local geologic hazards. 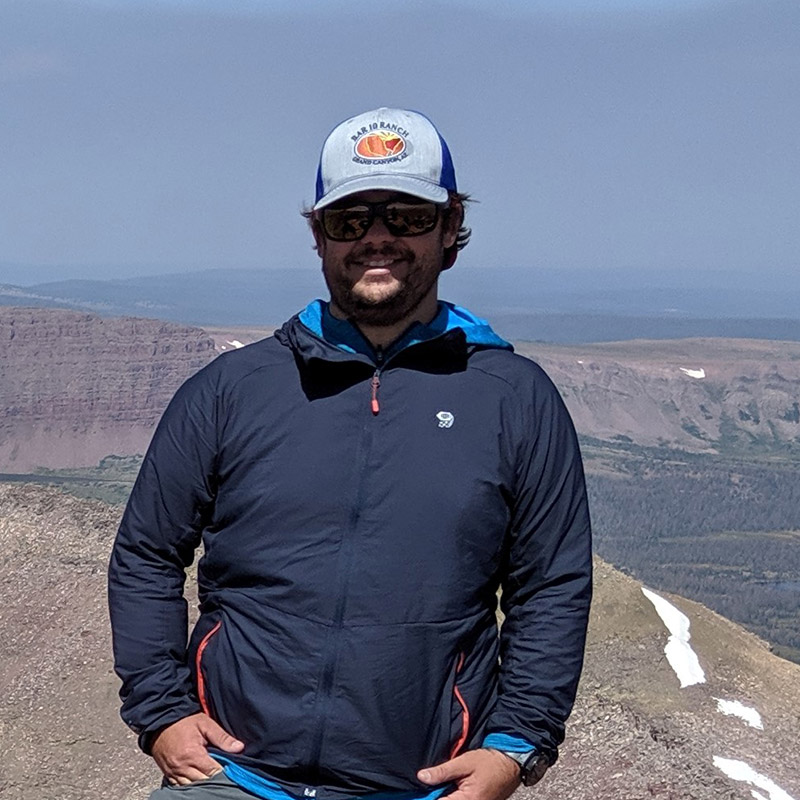 is a Project Geologist with the Geologic Hazards Program. He earned a B.S. degree in geology from the University of Utah and a Professional Geologist license in 2016 while working at the UGS. Adam specializes in paleoseismology and active fault mapping, has co-led multiple UGS paleoseismic research projects on the Wasatch fault zone, and re-mapped many active faults in Utah. He has extensive experience using sUAS platforms to study geologic hazards. He serves as staff to the Utah Seismic Safety Commission, providing outreach and education on Utah’s earthquake hazards.