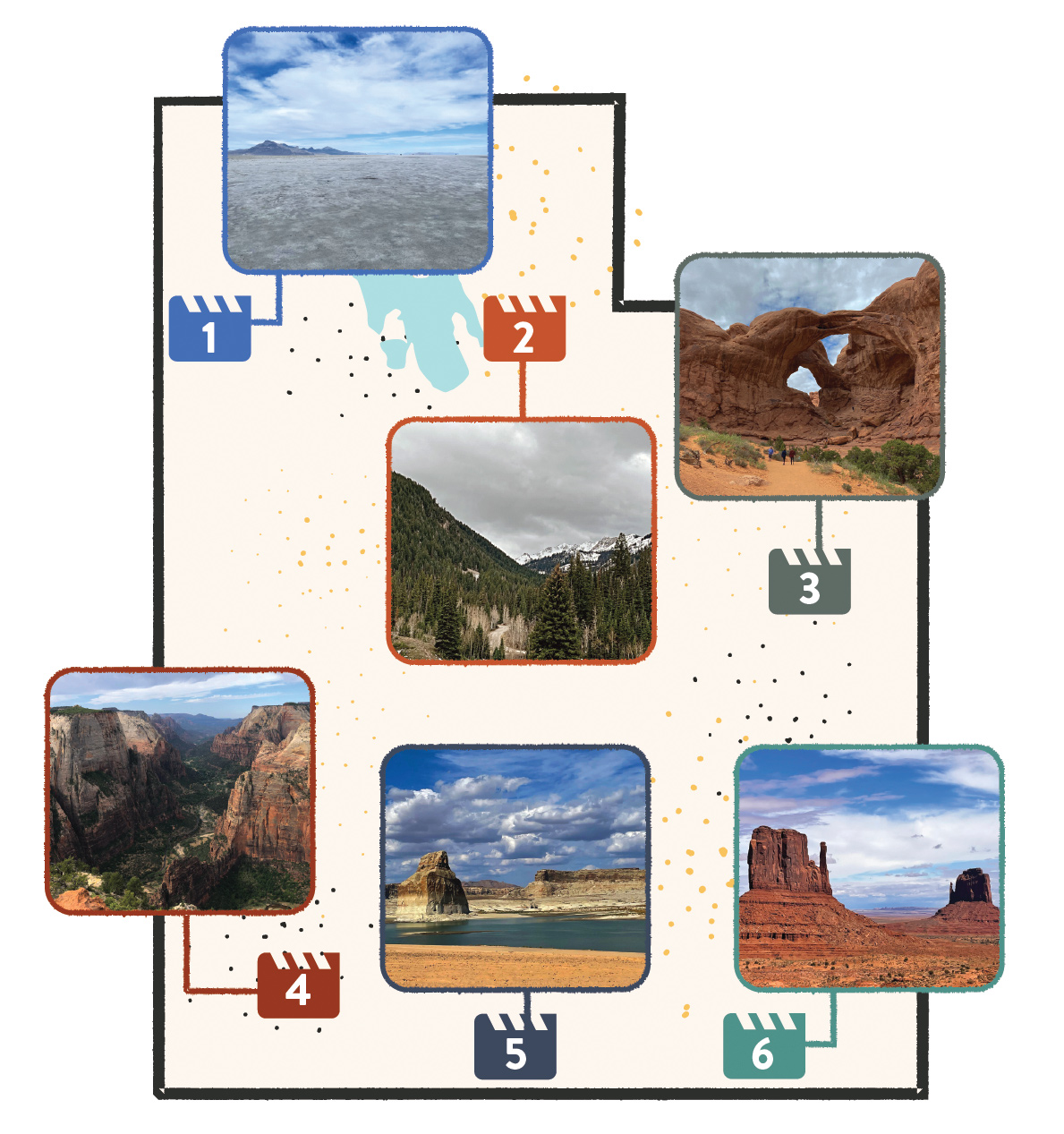 Utah’s legacy of movies is quite different from the average movie-making experience. Instead of artificial backgrounds and sets, Utah’s impressive geologic landscapes have served as the backdrop for hundreds of movies since the early 1920s where the state’s natural scenery has come to represent “the Wild West.” One of the first movies filmed in Utah, The Deadwood Coach (1924), used an array of filming locations in southern Utah such as Zion National Park, Springdale, Bryce Canyon National Park, and Cedar Breaks. Partially due to The Deadwood Coach’s success, the natural wonders of Utah’s geologic scenery became one of the driving reasons Hollywood studios came to Utah to film their movies. Westerns filmed in central and southern Utah were especially popular in the early days, but a change in popular movie genres in more recent years has brought with it a preference for filming in northern Utah as well. This article highlights the geology of six of the most used Utah backdrops for Hollywood films.

The Bonneville Salt Flats, an evaporative remnant of ancient Lake Bonneville, is an unparalleled place in northern Utah. When the lake was at its largest extent around 18,000 years ago, it was about 1,000 feet deeper than today’s Great Salt Lake. As this massive freshwater lake evaporated, it left behind a hard salt crust due to the concentration of salts and other minerals in the lake. In films, the Bonneville Salt Flats has served as the backdrop for many fictional settings such as Davy Jones’ Locker, the afterlife, Area 51, and as itself in the true-story film The World’s Fastest Indian (2005).

Some films that highlight the Bonneville Salt Flats:

The Precambrian to Cretaceous-age rocks (>540 million to around 66 million years old) of the Wasatch Range were initially uplifted by compressional folds and faults of the Sevier orogeny between 160 and 50 million years ago. Beginning around 13 million years ago, the rocks were uplifted again by extensional forces that caused Basin and Range normal faulting, which continues today. The Precambrian-and Paleozoic-age rocks (>540 million to 250 million years old) of the Uinta Mountains were uplifted during the Laramide orogeny around 60 to 30 million years ago. After millions of years of erosion, magma intrusions in the Wasatch Range, faulting, and glaciation, these mountain ranges have become some of the most impressive geologic features Utah has to offer. Hollywood studios and independent filmmakers have sought out the Wasatch and Uinta Mountains for their jagged snowy peaks and lush green forests to create all kinds of wilderness settings. Additionally, Park City in the Wasatch Range is home to the Sundance Film Festival. This festival, which began in 1978 and celebrates independent movie making, has significantly increased the number of movies and TV series that have been filmed in the region.

Some films that highlight the Wasatch and Uinta Mountains:

The Moab area is home to red rock cliffs, winding canyons, and iconic geologic formations like arches, fins, and petrified sand dunes. Most of these features were formed from a diverse geologic history beginning more than 300 million years ago when salt and sediments were deposited in the Paradox Basin. Sedimentary layers were deposited on top and make up the steep red cliffs that dominate Moab’s scenery. After uplift of the Colorado Plateau about 5 million years ago, the less dense salt layers shifted and formed an anticline that fractured the overlying sandstone. Wind and water took advantage of those fractures to form the arches and fins in Arches National Park. Dead Horse Point State Park towers over the Colorado River that has cut through and exposed rock layers ranging in age from 184 million to slightly older than 285 million years. Wagon Master (1949), the first movie filmed in the Moab area and directed by John Ford, opened the gates for Moab as a filming location for westerns. That film made Hollywood realize the desert scenery there was just as grandiose as Monument Valley. Dead Horse Point became a popular filming location in the 1950s and was often used as a stand-in for the Grand Canyon.

Some films that highlight the Moab area:

Southwestern Utah, home to Zion National Park, St. George, and Snow Canyon State Park, is known for its massive cliffs and colorful exposed rocks. The Navajo Sandstone, which makes up the towering cliffs of Zion National Park and Snow Canyon, is a geologic formation that formed from an ancient Sahara-like desert 185 to 180 million years ago. St. George and Snow Canyon also have basalt bluffs and lava tubes from volcanic eruptions and flows as old as 2.5 million years. Filmmakers started using these sage-brushy, red-cliff deserts to film westerns in the late 1920s during the silent film era starting with The Deadwood Coach. The Conqueror (1956), another early movie filmed there, was filmed during U.S. Government above-ground nuclear testing in Nevada. The film crew, along with the locals, are members of a group referred to as the “Downwinders” and were exposed to radiation as it blew over parts of Utah. About 40 percent of the film crew contracted cancer in their lifetimes and it is believed the nuclear testing was partly to blame.

Some films that highlight southwestern Utah:

The 186-mile-long, man-made Lake Powell is a popular tourist destination because of its striking geologic features and diverse water recreation activities. Glen Canyon Dam, completed in 1963, enabled the Colorado River to fill Glen Canyon and create Lake Powell. Glen Canyon was formed by the Colorado River carving deep channels into the rock layers for over 5 million years. These erosional forces exposed many geologic formations that were deposited from about 300 to 90 million years ago. Filming in the Glen Canyon/Lake Powell area began in the 1960s and was a popular location for historical and science fiction films. The mix of red rock desert and open water created realistic otherworldly backdrops. Some of the movies filmed there are living time capsules of the landscape before the dam was finished. The Greatest Story Ever Told (1965) filmed one of its iconic baptism scenes in the Colorado River days before the dam closed and Lake Powell started filling. That scene’s filming location is now covered by water in today’s Padre Bay.

Some films that highlight Lake Powell:

Monument Valley, located on the Navajo Nation straddling the Utah and Arizona border, is known for its flat desert plains and towering stand-alone buttes. The buttes were formed from extensive regional weathering and erosion that removed hundreds of feet of bedrock from the valley floor, leaving behind only pockets of shale, sandstone, and conglomerate which form the buttes or “monuments” we see today. John Ford, legendary director of westerns, was one of the first to use this landscape as a backdrop for his movies. His first Monument Valley film, Stagecoach (1939), showed this desert wonder to the world and inspired many other filmmakers to utilize this unique area. After countless classic western movies and memorable cameos like in Back to the Future Part III (1990) and Forrest Gump (1994), Monument Valley’s landscape has become as famous as the names in the movie credits.

Some films that highlight Monument Valley:

To learn more about movies filmed in Utah, check out these resources: