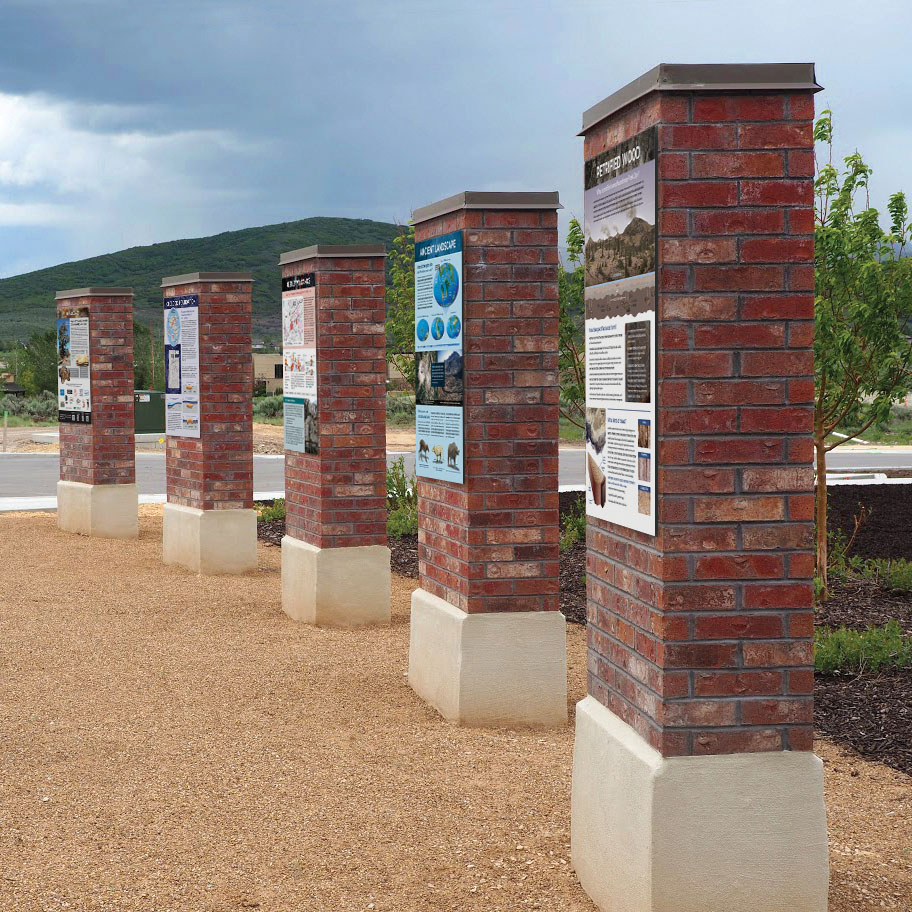 After 4.5 billion years of geologic evolution, 35 million years of turning wood into stone, two decades of community vision, and a year of developing informational signage, the Park City Sunrise Rotary Regional Geologic Park was unveiled at a ribbon-cutting ceremony on September 21, 2019!

In 1997 a heavy equipment operator uncovered an enormous 5- to 10-ton piece of petrified wood while excavating a water line near Silver Creek Junction, roughly 5 miles north of Park City’s historic downtown. This discovery from an area already known for smaller pieces of petrifi ed wood prompted members of the Park City Sunrise Rotary Club to begin searching for a way to create a space devoted to telling the amazing story of the area’s unique geology. They approached developer Matt Lowe as he began planning a new subdivision, Silver Creek Village. Mr. Lowe liked their idea and subsequently dedicated the space and constructed the Regional Geologic Park to tell the story of the petrified wood and its interconnections with the Park City mining district, local ski resorts, beautiful mountain scenery, and other aspects of the natural history of the Park City area.

The park includes a welcome panel, nine information panels, and specimens of petrified wood. The signage includes something for everyone, from the casual visitor to geology students on fi eld trips and traveling geologists. Here are some highlights from the panels.

Geologic Foundation: The modern landscape surrounding the Regional Geologic Park is built upon geologically ancient events. Two continental-scale features dominate the geology of the greater Park City area: the north-south trending Utah hingeline and the east-west-trending Uinta-Cottonwood arch. Both owe their origin to the formation and subsequent break-apart of the supercontinent Rodinia, between 1.7 billion and 780 million years ago.

Keetley Volcanics: Roughly 30 to 40 million years ago, active volcanoes towered over the area. The volcanic rocks (known as the Keetley Volcanics) and related igneous intrusions are responsible for the petrified wood and mineralization in the Park City mining district. For more information see Survey Notes, v. 50, no. 3, p. 4–5.

Ancient Landscape: What did the region look like 35 million years ago? Volcanoes pocked the landscape and explosive eruptions of rock and ash leveled forests that provided the area’s petrifi ed wood. 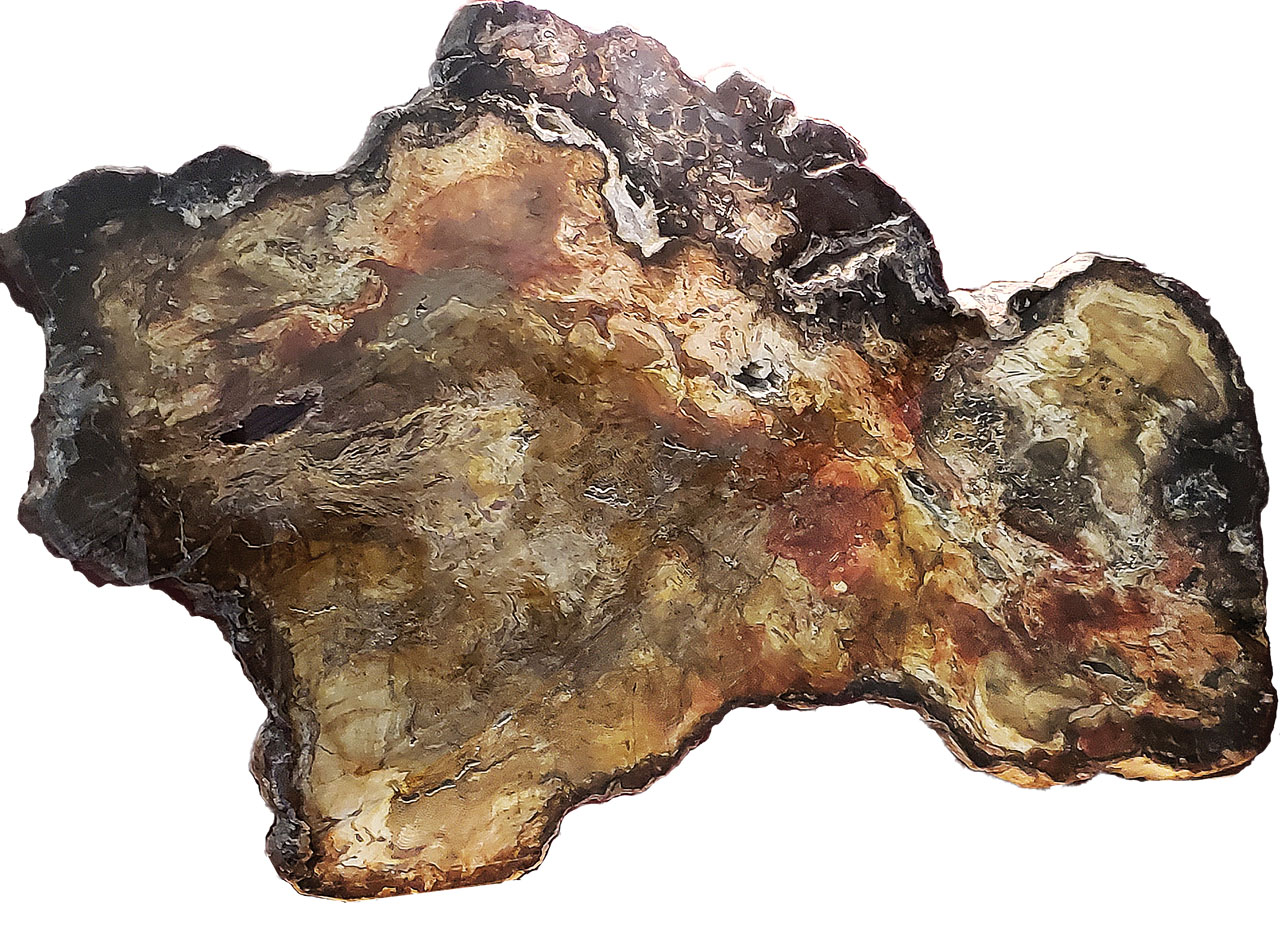 This 5-by-8-foot petrified log collected near the park was sliced into massive slabs, three of which are on display throughout Summit County. This slab is at the Courthouse in Coalville, one is at the Sheldon Richins Building at Kimball Junction, and one is at the Justice Court near the Regional Geologic Park. Photo by Tom Gadek.

Modern Landscape: Tectonic-scale forces and erosion created Utah’s current landscape in the 35 million years since forested volcanoes loomed over the area. Today, Utah contains parts of three physiographic provinces, each with distinctive landforms and geology: the Basin and Range Province, the Colorado Plateau, and the Middle Rocky Mountains, where the Regional Geologic Park is located.

Ice Age: During the most recent Ice Age in Utah, glaciers blanketed high mountain valleys and peaks, and Lake Bonneville covered most of Utah’s western valleys. The fi rst extensive collection of Ice Age land animals from Utah was discovered in 1963 about a half mile northwest of the Regional Geologic Park.

Water: Park City lies within the Snyderville drainage basin, an area of complex geology that is interesting to geologists but frustrating to water managers, real estate developers, and politicians. To meet growing demands for water in the Park City area, suppliers have utilized creeks, springs, mine drainage tunnels, groundwater, and imported water from outside the basin. Geologic Maps: Perhaps the best way to communicate the complex geologic story of the Park City area is through geologic maps. A geologic map is a tool that can be used in many ways—from learning about the geologic history of an area, to natural resource and hazard assessment, to providing information for intelligent land-use planning and growth. For more information see Utah Geological Survey Public Information Series 66.

How to Get to The Regional Geologic Park:

From the Wasatch Front, head east on Interstate 80 to exit 146 for U.S. Highway 40/189 toward Heber City/Vernal. After the interchange take the first exit (exit 2) for Silver Summit. At the end of the off-ramp turn left (east) onto Silver Summit Parkway, which becomes Silver Creek Drive after crossing over the highway. In less than a quarter mile from U.S. Highway 40/189, at the traffi c circle, take the third exit onto Pace Frontage Road (northbound). After half a mile turn right (east) onto Old Forest Road. The park is located a couple hundred yards past the intersection on the left.

From Park City’s historic downtown, head east on Kearns Boulevard (UT 248) to U.S. Highway 40/189 and go north. Take exit 2 for Silver Summit. At the end of the off-ramp turn right (east) onto Silver Creek Drive and follow the directions above.