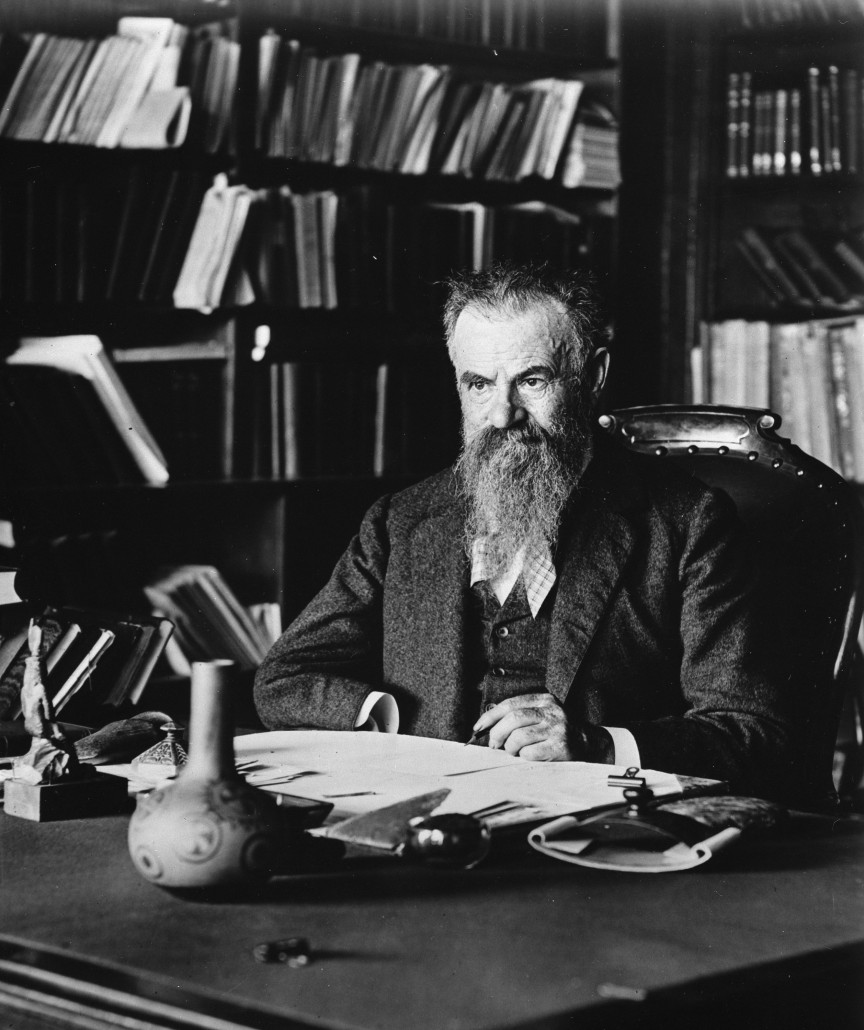 John Wesley Powell was born on March 24, 1834, in Mount Morris, New York, to Joseph Powell and Mary Dean. He grew up interested in history, literature, botany, zoology, and nature. Powell’s family moved to Ohio in 1838, Wisconsin in 1846, and settled in Illinois in 1851. In 1852, he became a teacher and attended college intermittently at the Illinois Institute, Illinois College, and Oberlin College, but never received a degree.

When the American Civil War started in 1861, Powell enlisted in the Union Army at age 27 as a topographer, cartographer, and military engineer and quickly advanced to a second lieutenant. He took leave on November 28, 1861, and married Emma Dean, the daughter of his mother’s half-brother, but returned to service soon after. On April 6, 1862, at the Battle of Shiloh in Tennessee, Powell was hit with a bullet in his right arm and field surgeons had to amputate it at the elbow. He became a recruiting officer back home in Illinois while recuperating from his injuries, but returned to active duty in 1863 and was promoted to the rank of major.

After the war, Powell taught natural sciences at Illinois Wesleyan University and later at Illinois State Normal University. In 1867, he became the curator of the Illinois Natural History Society Museum and organized a specimen-collecting expedition to Colorado where he climbed Pikes Peak and explored part of the Rocky Mountains.

In 1868 Powell organized the first of his great expeditions in the West to explore the Colorado River and its tributaries, which included his historic passage through the Grand Canyon. Funding for the trip, which started May 24 and ended August 30, 1869, came from the Illinois Natural History Society and Illinois Industrial University, with Powell’s promise of sharing data and specimens for study. Scientific instruments came from the Smithsonian Institution and the Chicago Academy of Science. Rations were provided by the U.S. Army with Congress’s authorization and transportation of the boats was courtesy of the Union Pacific railroad. The purpose of this expedition was to explore previously unmapped areas as well as study the geology and native flora and fauna.

During his second Colorado River expedition, Powell employed Jacob Hamblin, a Mormon missionary from southern Utah, to help negotiate the safety of the trip. Hamblin had an excellent relationship with the Native Americans and Powell was able to study the Native American cultures of the West. From his ethnological work on his expeditions, he published Introduction to the Study of Indian Languages, with Words, Phrases, and Sentences to Be Collected in 1877 and Indian Linguistic Families of America, North of Mexico in 1891.

In 1879, Powell became the first director of the U.S. Bureau of Ethnology of the Smithsonian Institution and held the position until his death. Among the many organizations he worked for, one of Powell’s most respected achievements was serving as the second director of the U.S. Geological Survey (USGS) from 1881 to 1894, which he served concurrently with his other positions. He advocated strict water resource conservation based on his exploration of the American West’s river systems and geology. He published Report on the Lands of the Arid Regions of the United States in 1878 where one of his ideas was to draw state boundaries according to watershed areas. While he was the director of the USGS, Powell emphasized mapping and helped influence the call for nationwide 1:24,000-scale topographic maps. He resigned from the USGS in 1894 due to opposition to his water resource conservation efforts from western politicians.

Major John Wesley Powell died on September 23, 1902, at the age of 68, in his family’s vacation home in Maine and was buried in Arlington National Cemetery with full military honors. Today, Powell is remembered through landforms and natural features named after him (e.g., Mount Powell in the Uinta Mountains and Lake Powell in southern Utah) or by him (e.g., Glen Canyon in southern Utah) across the American West. He is honored for his contributions to geology, geography, ethnology, and the natural sciences as a whole.