Glad You Asked: The Curious Case of the Green River in the Uinta Mountains

by Douglas A. Sprinkel

People often ask, Why does the Green River flow toward and through the Uinta Mountains? Or, Why does the Green River cut through the middle of Split Mountain when logically it should have flowed around it? Those questions also puzzled John Wesley Powell during the first-ever scientific exploration of the Green and Colorado Rivers in 1869 (see main article in this issue of Survey Notes).

During their month-long stay in the eastern Uinta Mountains, Powell and his companions explored the Green and Yampa Rivers as well as the side canyons and surrounding peaks. Some of our earliest state-of-the-art scientific measurements and descriptions of the geology were the result of that first expedition. Powell made a second trip down the Green and Colorado Rivers in 1871, as well as several pack trips into the territories of Colorado, Wyoming, and Utah. These overland traverses in 1868, 1869, 1874, and 1875 helped Powell formulate his understanding of the geology of the eastern Uinta Mountains.

During Powell’s first expedition, he noted that the Green River flows from its headwaters in the Wind River Mountains of Wyoming southward across a basin, toward the Uinta Mountains. However, at the foot of this mighty mountain range, instead of being deflected by the obstruction, the river flows directly into the range! This and other examples throughout the Uinta Mountains of where the Green River flows through obvious obstructions instead of around them sparked Powell’s imagination to explain such a peculiarity.

So how did the Green River achieve what seems to be an impossible route? At first Powell thought that the river simply followed established fissures within the range. However, Powell rejected that concept because “…very little examinations show that this explanation is unsatisfactory. The proof is abundant that the river cut its own channel; that the cañons are gorges of corrasion.” Powell concluded that the Green River had to have been running its course before the mountain range formed. Powell recognized that the Uinta Mountains are a large anticlinal fold that formed by uplift. He hypothesized that the uplift had to be slow enough for the Green River to cut into the rising fold without altering the river course. Thus, he surmised that the Green River cut its canyon as the range rose around it, and tributaries that fed into the Green River were agents of erosion that stripped the rock off the axis of the great arch. Had the uplift been rapid, the river would have been deflected to a new course that would take the Green River around the flanks of the Uinta Mountains. Powell coined the term “antecedent valley” for this hypothesis. He also coined the terms “consequent valley” for channels that form as a result of the existing topography and “superimposed valley” for channels that form on low-gradient surfaces over which the channel maintains its course even as the stream cuts down into pre-existing structures. The term “superimposed” has since been shortened to “superposed.” Powell also considered but rejected the notion that the Green River is a superposed stream.

Image based on Google Earth© oblique view of Split Mountain and surrounding regions. 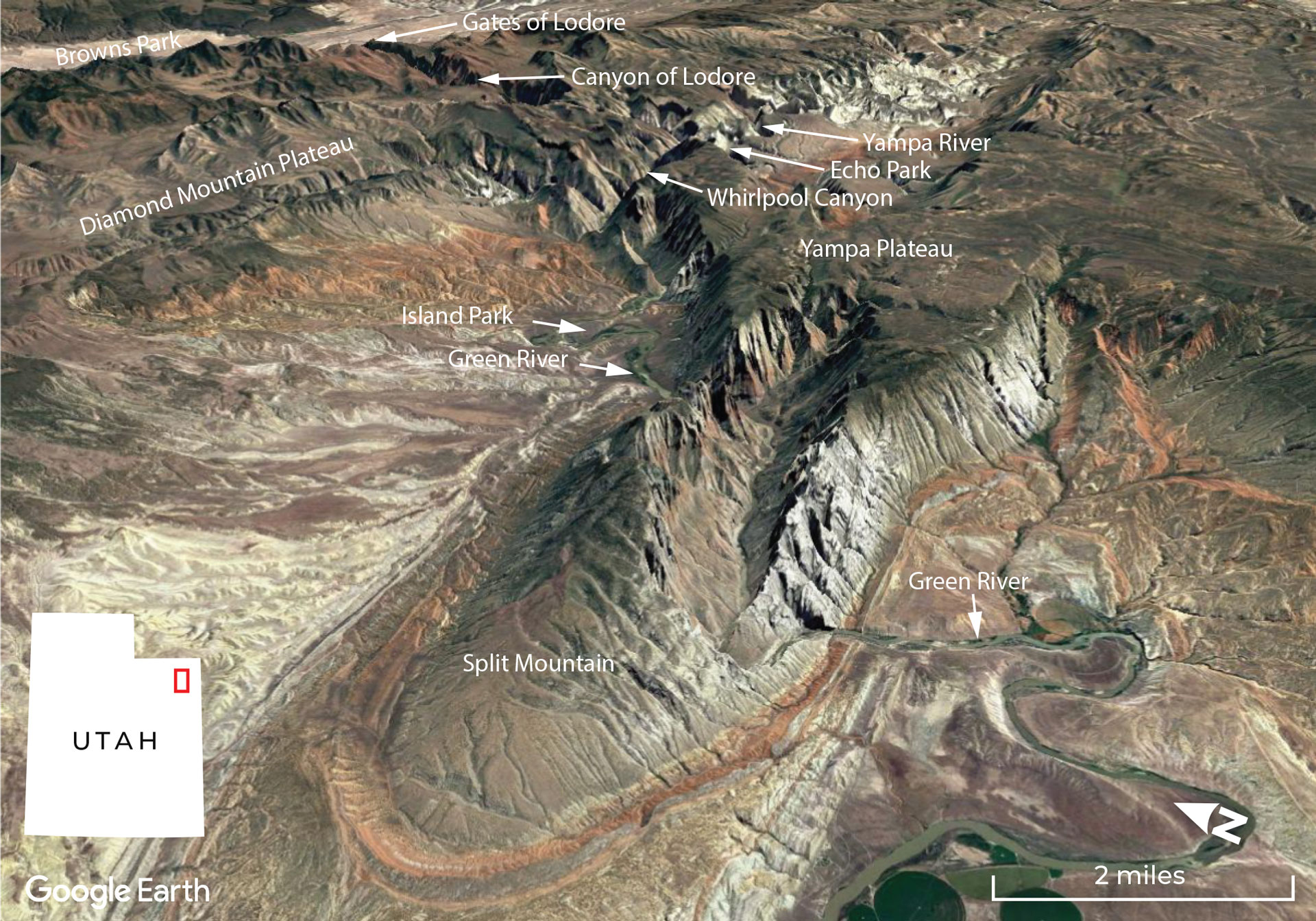 Was Powell right? Work by geologists like Julian Sears in 1924 and Wilmot Bradley in 1936 provided evidence that a network of streams flowed away from the Uinta Mountains into the adjoining basins at the end of Uinta uplift during the Laramide orogeny (mountain-building event) 70 to 34 million years ago including where the Green River now flows toward the range. Sears also provided evidence that later faulting formed Browns Park and argued that the Green River was a superposed stream. However, work by Wallace Hansen from 1965 to 1986 provided the clearest picture of drainage reorganization and capture of the Green River. Stream or river capture (also called stream or river piracy) is the diversion of a stream from its current channel to the channel of the capturing stream, often causing the captured stream to reserve its flow. The lowering of the eastern Uinta Mountains by Neogene (20 million years ago to present) extensional faulting was the agent that caused the change in the eastern Uinta Mountain drainage system and the
ultimate capture of the Green River.

Powell and his companions reached Island Park on June 22, 1869, where they camped on one of the islands on the Green River. While there they explored the area noting topography and geology. They climbed the flank of Split Mountain to view the core of the mountain and the rapids within. Powell noted that the Green River entered the range through its north flank, then turned west down the axis of the fold before it turned south again to exit the mountain through its south flank.

Image based on Google Earth© oblique view of Split Mountain and surrounding regions.

Split Mountain is an anticline formed by uplift along the Island Park reverse fault zone, which is on the north limb of the fold. This faulting and folding are part of the general uplift of the Uinta Mountains. At the time of this deformation, the Mesozoic formations that typically overlie the Paleozoic formations were still present and involved in the folding. During a period of relative tectonic quiescence 34 to 25 million years ago, the flanks of the Uinta Mountains, including Split Mountain and the anticline, were buried by a thick blanket of sediments that became the Oligocene-age Bishop Conglomerate. The Bishop Conglomerate formed a low-gradient slope on which streams meandered. Before the Green River was captured and redirected toward the Uintas, it is thought that the Yampa River meandered across the landscape at nearly the present elevation of the Diamond Mountain and Yampa Plateaus (A). The relatively unobstructed Yampa River incised a canyon into the Bishop Conglomerate generally southwest to the Uinta Basin crossing what would become Echo Park, Whirlpool Canyon, Island Park, and Split Mountain. As downcutting continued, the canyon deepened and eventually cut into the emerging Split Mountain (B). The ancestral Yampa River probably took advantage of Laramide fractures on the flanks and crest of the anticline. The Yampa could have been captured by a stream that flowed down the anticlinal crest. Intriguing, beheaded valleys on nearby Blue Mountain, which could be either an ancestral channel of the Yampa, or of a major tributary, support this theory. Regardless, it seems clear to geologists that Split Mountain is a classic example of a superposed stream (C).

The final chapter in this story is the integration of the Green River into the Colorado River basin. Researchers now think that at Echo Park a tributary of the ancestral Yampa River occupied what is now Canyon of Lodore. In 2005, geologists Joel Pederson and Kevin Hadder argued that the tributary formed as Browns Park filled with sediment around the Gates of Lodore. This accumulation of sediment allowed the tributary to spill over and connect the drainage system in Browns Park with the Yampa River drainage and flow into the Uinta Basin, eventually joining the Colorado River below Green River, Utah. The Green River was now captured and redirected to flow toward the Uinta Mountains, through Flaming Gorge and Red Canyon, and down Browns Park to the spillpoint near the Gates of Lodore, completing the river system we see today (perhaps the river in the Uinta Basin should have been called the Yampa since the Yampa was there first!). So, Powell’s keen observations were amazingly astute, though evidence now shows a much more complicated story than he surmised.