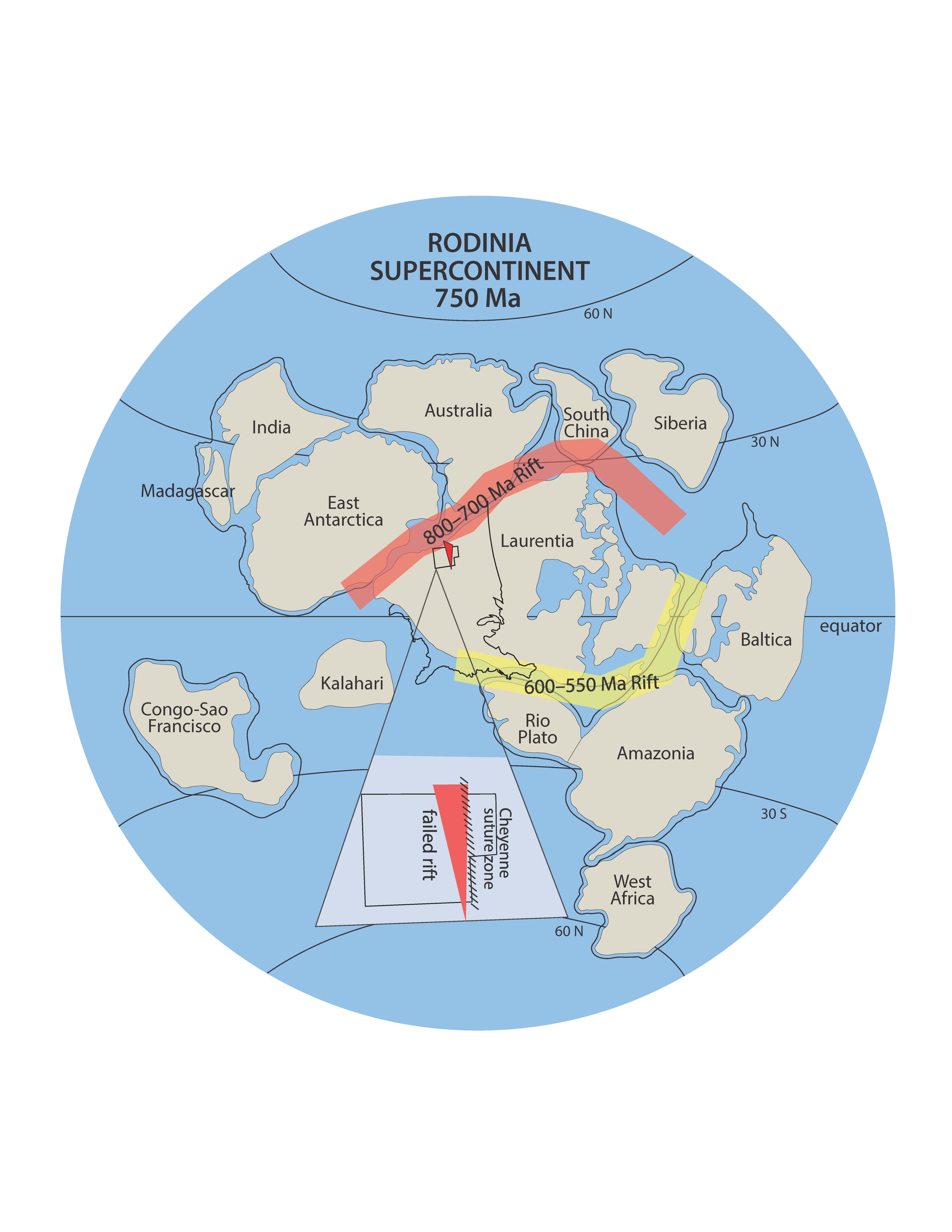 The supercontinent Rodinia formed between 1.7 and 1.0 billion years ago as island-arc terranes and tectonic plates accreted to the southern margin of older cratonic rocks. About 780 million years ago, Rodinia began to break apart when Australia and Antarctica rifted away from Laurentia (North America). The rift ran through what is now central Nevada. A failed rift (see inset) created the Uinta trough just south of today’s Utah-Wyoming border. Image modified from Goodge, J.W., and others, 2008, A positive test of East Antarctica–Laurentia juxtaposition within the Rodinia supercontinent: Science, v. 321, no. 5886, p. 235–240.

Who among us knew that a series of volcanoes, lined up east to west, once towered over what is now the central Wasatch Range? The roots of these long-gone volcanoes are preserved in the granitic rocks of Big and Little Cottonwood Canyons, and eastward beyond Park City. Volcanic rocks—the eruptive products of these volcanoes—are preserved in the gap between the Wasatch Range and Uinta Mountains, and they hold important clues to what the landscape and life looked like during the Eocene and Oligocene Epochs when the volcanoes were active some 30 to 40 million years ago. This igneous activity was also the ultimate source of mineralization for the Park City mining district, once one of the West’s most important silver-lead-zinc districts.

The unusual east-west alignment of these ancient volcanoes can be traced back to geologic events 1.7 billion years ago when tectonic plates collided with the southern margin of the North American craton, forming the Cheyenne suture zone, an east-west zone ofweakened rock near the present-day Utah-Wyoming state line (see Doug Sprinkel’s “Mysteries of the Uinta Mountains” article in this issue). Those tectonic collisions were part of the long process of building the supercontinent Rodinia. About 780 million years ago, Rodinia began to break apart along a north-trending rift that cut through what is now central Nevada, splitting Laurentia, the Precambrian core of North America, from the western part of the supercontinent. A failed arm of that rift opened to form the Uinta trough, a fault-bounded rift basin that collected sediment shed off the continent.

The weakness of this failed rift controlled the subsequent geologic evolution of northeastern Utah. During the Cretaceous Period it influenced the emplacement of thrust faults. During the Late Cretaceous to early Tertiary the trough was “inverted” or elevated to form the east-west Uinta Mountains. During the middle Tertiary it controlled faults related to early crustal extension and served to focus magmatic activity of the Wasatch igneous belt, described below. This zone of crustal weakness continues to affect the location of faults associated with modern extension.

The Wasatch igneous belt is a 30-mile-long, east-west-trending string of 30- to 40-million-year-old granitic intrusions in the Wasatch Range. The belt is part of a longer zone of intrusions that reaches westward into the Oquirrh Mountains and beyond. The east-west alignment is the latest manifestation of the long tectonic history of the building and ultimate demise of Rodinia. The granitic intrusions are the “roots” of long-gone volcanoes—I like to think of them as frozen magma chambers—what remained after the cones themselves eroded away. Because of relative uplift and tilting of the Wasatch Range, the depth of emplacement of the exposed portion of the intrusions increases from east to west.

Silver, lead, zinc, copper, and gold mineralization of mining districts in Park City, Big and Little Cottonwood Canyons, and American Fork Canyon, and those of Bingham, Stockton, and Ophir in the Oquirrh Mountains to the west, owe their existence to these intrusions. As magma that fed volcanoes worked its way into the upper crust, the resultant heat created hydrothermal systems that mineralized favorable host rocks and fractures. The Park City mining district was the most important mining district in the Wasatch Range; it was Utah’s third largest producer of base and precious metals and was active from the late 1860s to the early 1980s. The district produced over 45 tons of gold, nearly 8000 tons of silver, over 1,224,000 tons of lead, nearly 700,000 tons of zinc, and nearly 60,000 tons of copper. For several years in the late 19th century, vein deposits of the Ontario mine (the first large discovery in the Wasatch Range, which formed the basis of the Hearst family fortune) made it the largest source of silver in the U.S. Like many mining districts in the West, the Park City area has transformed itself into a year-round recreation center. The Park City Historical Society has placed dozens of interpretive signs in town and on the mountain to share this fascinating history.

Keetley Volcanics is the name given to volcanic rocks derived from Cascade-like stratovolcanoes and other vents that once towered over the Wasatch igneous belt. Two of the easternmost intrusions, east of Jordanelle Reservoir, may be the source of most of the Keetley Volcanics. The Indian Hollow plug is a volcanic neck surrounded by a radial dike swarm. The nearby Park Premier porphyry is composed of several shallow, hydrothermally altered intrusions with precious-metal mineralization.

The Keetley Volcanics are divided into three parts:

These three parts record evolution of the volcanic field, beginning with (1) fine-grained volcanic ash deposited on floodplains and in small lakes that were eventually buried by (2) encroaching aprons of coarse sediment shed off the volcanoes as lahars (debris flows of volcanic rock and mud) and as gravel in braided-stream channels, which in turn were ultimately buried by (3) lava flows on the flanks of the volcanoes themselves. Today, the Keetley Volcanics partly fill a structural and topographic saddle between the Wasatch Range and Uinta Mountains.

The lower part of the Keetley Volcanics has yielded petrified wood belonging to at least two different types of conifers, one a species of pine and the other possibly a tree of the cypress family, which includes junipers and redwoods. These trees grew low on the slopes of the volcanoes, probably on floodplains that radiated away from the volcanoes. The rocks in which the petrified trees were found are non-resistant and poorly exposed, so the best outcrops are found in excavations during development, which is how petrified logs were first discovered near Silver Creek Junction. The trees may have been buried by a large ash eruption or they may have been swept away and deposited during a flood. Regardless, the petrified wood offers a glimpse of life at the close of the Eocene, some 35 million years ago; the fossil wood is the focal point of a new geologic park now being built near the junction of I-15 and Utah Highway 40 (see sidebar on page 7).

The lower part of the Keetley Volcanics also yielded fossils of early mammals, including Leptomeryx, a small, slender, deer-like animal; the rodent Paradjidaumo minor; and Agriochoerid, a small, forest herbivore unlike any living mammal. Doubtless many other plants and animals were present, collectively comprising a forest ecosystem not unlike that found today in high mountain areas of the western U.S.

The Keetley Volcanics include an intriguing group of rocks known as the Silver Creek chaos. The “chaos” consists of unusual, highly fractured and broken (brecciated) pieces of non-volcanic sedimentary bedrock that are commonly bus to house size, but several are larger in size than a football stadium. These brecciated blocks include red mudstone of the Ankareh Formation, pink sandstone of the Nugget Sandstone, and light-brown sandstone of the Weber Quartzite. The blocks are unusual in that they are brecciated sedimentary blocks found near the base of a Keetley unit known as the volcanic mudflow breccia of Silver Creek. The volcanic mudflow breccia of Silver Creek—the middle unit that composes much of the Keetley Volcanics— represents deposition as lahars on the distal flanks of volcanoes that once towered over the Indian Hollow plug and Park Premier porphyry stocks of the Wasatch igneous belt.

The Silver Creek chaos appears to be debris-avalanche deposits consisting of semi-coherent slabs of rock that travelled 10 miles or more across fine-grained tuffaceous strata of the lower Keetley Volcanics. This likely resulted from partial collapse of the volcano that once towered over the Park Premier porphyry stock (see cross section below). The roots of this old volcano are well exposed in road cuts east of Jordanelle Reservoir, where sedimentary bedrock is juxtaposed against volcanic porphyry rocks emplaced at shallow depths near the base of the long-gone volcano. Since the 1980 landslide and eruption of Mount St. Helens in Washington State, geologists have recognized hundreds of similar collapse events at modern volcanoes worldwide. The Silver Creek chaos is an example of a debris-avalanche deposit—a fossil landslide—derived from a long-extinct 35-million-year-old volcano.