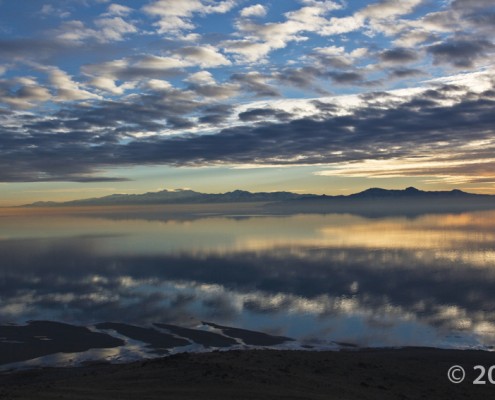 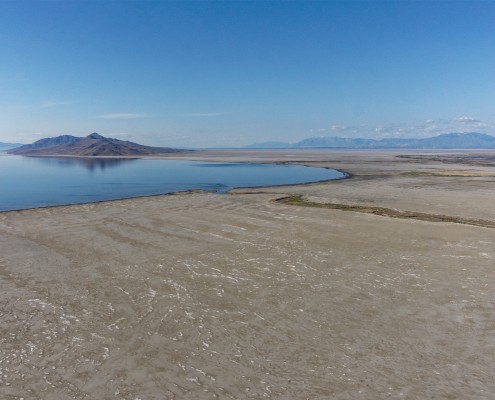 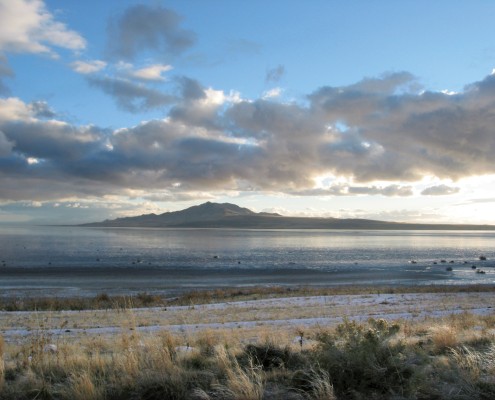 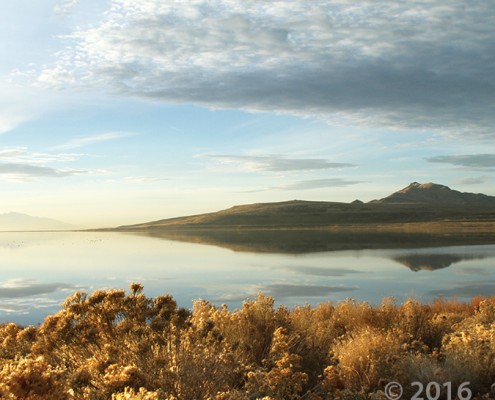 Great Salt Lake is a terminal lake because it has no surface outlet (rivers flowing from it). Water is lost from the lake mostly through evaporation. Evaporation rates are highest during the hot summer months and lowest during the winter. An average of about 3 million acre-feet of water evaporates from the lake each year.

Great Salt Lake averages approximately 75 miles long by 35 miles wide at a water surface elevation of about 4,200 feet. At this elevation, the lake covers an area of 1,034,000 acres, and has a maximum depth of about 33 feet. Typically, the lake level fluctuates one to two feet annually, rising to its highest level during May through July (following the melting of the mountain snowpack) and dropping to its lowest point during October through November (after the hot summer months).

Image Caption: Great Salt Lake water levels have varied by more than 20 feet in historical time, resulting in shoreline shifts of as much as 20 miles.

Lake Bonneville was a massive, Ice Age lake that existed from about 30,000 to 13,000 years ago. It occupied a low, bowl-shaped depression in the eastern Great Basin. At its largest extent, it spanned about 20,000 square miles of western Utah and parts of eastern Nevada and southern Idaho.

Lake Bonneville was about 325 miles long, 135 miles wide, and had a maximum depth of over 1,000 feet. It contained many islands that are the present-day mountain ranges of western Utah. Its relatively fresh water was derived from direct precipitation, rivers, streams, and meltwater from glaciers. During the time of Lake Bonneville, the climate was somewhat wetter and colder than now.

Lake Bonneville water levels started dropping significantly around 16,000 years ago when the climate began drying and warming, increasing evaporation and decreasing precipitation, which caused a shift in the water balance. In about 2,000 years, the lake had dropped to about the level of modern Great Salt Lake.

2015 Miscellaneous Publication 15-2
PDF publication
(Instigated to better understand the development of transgressive shorelines in Lake Bonneville that developed during the late Pleistocene.)

The Gilbert episode in the Great Salt Lake Basin, Utah

The salinity level of Great Salt Lake (GSL) is quite dynamic due to natural lake level fluctuations and man-made barriers within the lake. At a number of sites throughout the lake, the UGS takes samples at various depths through the water column, measures those samples for density, and analyzes them for chemistry. This sampling program has largely been funded by the Utah Division of Forestry, Fire and State Lands.