Residents living within high rock-fall-hazard zones in Rockville, Utah, face the possible consequences of a large rock fall similar to the fatal event that occurred last December. That is the principle finding of a geologic investigation into the rock fall that killed two people on December 12, 2013. That afternoon, a huge, joint-controlled rock mass, with an estimated volume of almost 1,400 cubic yards and weighing about 2,700 tons, detached from the cliff face at the top of the Rockville Bench, near Zion National Park. The rock mass fell onto the steep slope below the cliff, and shattered into numerous fragments. The rock fall debris then moved rapidly downslope before striking and destroying a house, detached garage, and a car. The largest boulder to strike the house weighed an estimated 520 tons. 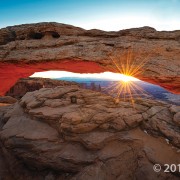 What Causes an Earthquake? Faults Explained

Laying to Rest an OverARCHing Issue

Leveraging $6 Million into $50 Million Worth of Energy Projects

My Tweets
Minute Out In It: Rumor Control (Video from Yellowstone National Park)"Spot the Rock!" for Thursday, April 3, 2014
Scroll to top