by Janae Wallace and Trevor Schlossnagle 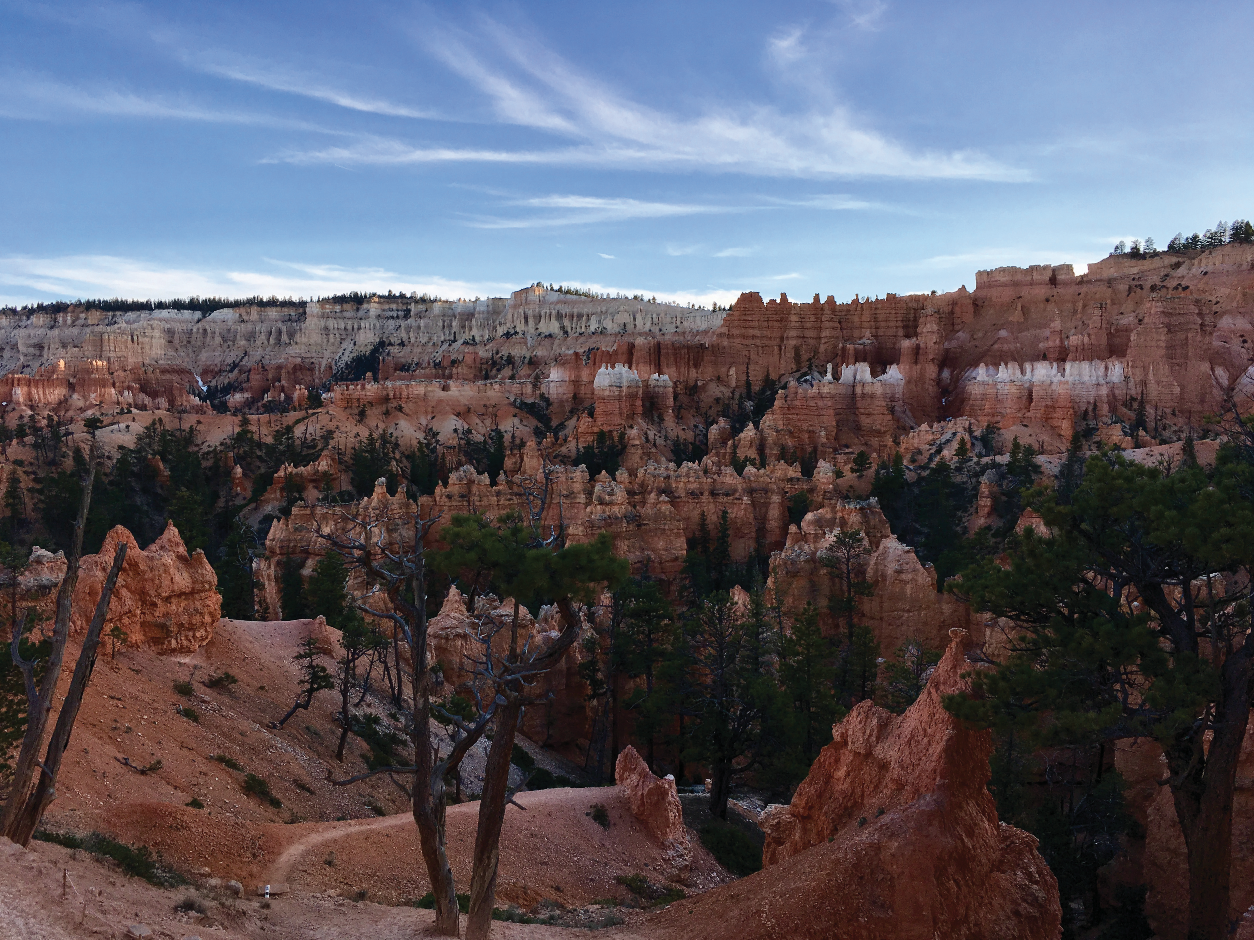 Bryce Canyon National Park (BCNP) and its environs host spectacular variegated pink, orange, and white-colored cliffs of the Claron Formation that attract millions of visitors every year. BCNP was designated as a national monument in 1923 and became a national park five years later. The rural area surrounding BCNP was settled by Mormon pioneers in the 1850s and in 2007, nearby Bryce Canyon City was established. Visitation to BCNP and the surrounding area is growing. For example, approximately 1.7 million people visited the park in 2015 compared to 2.7 million people in 2018. This increase in visitors has put a strain on the current water supply wells and wastewater disposal systems in the area. Bryce Canyon City gets its water from public supply wells and has its own sewage lagoons, whereas the surrounding community of scattered residents, campgrounds, and larger hotel developments use individual wells for water and septic tanks for waste disposal. Potential future development, groundwater resources development, and the threat of future drought in southwestern Utah prompted our study of groundwater quality and quantity for BCNP and Bryce Canyon City.

Groundwater resources in the area include an aquifer in alluvial sediments filling the valleys, an aquifer in rocks of the Tertiary-age Claron Formation, and bedrock aquifers in older Cretaceous-age strata. Aquifers in the valley fill and Claron Formation feed springs, seeps, and waterfalls in BCNP and supply water to wells used by the park and the local community. Snowmelt and headwater springs that issue from the Claron Formation and local alluvial deposits also feed the East Fork Sevier River, which originates south of Emery Valley and is an important source of irrigation water in nearby Tropic Valley. The East Fork Sevier River flows through Emery Valley from southwest to northeast and continues northeast through Johns Valley. The hand-dug Tropic Ditch taps into the East Fork Sevier River and transports water east through Water Canyon toward Tropic Valley from April until October. Understanding the interactions between the groundwater aquifers and surface water (seeps, springs, and the East Fork Sevier River) in Johns and Emery Valleys is a key goal of this study. 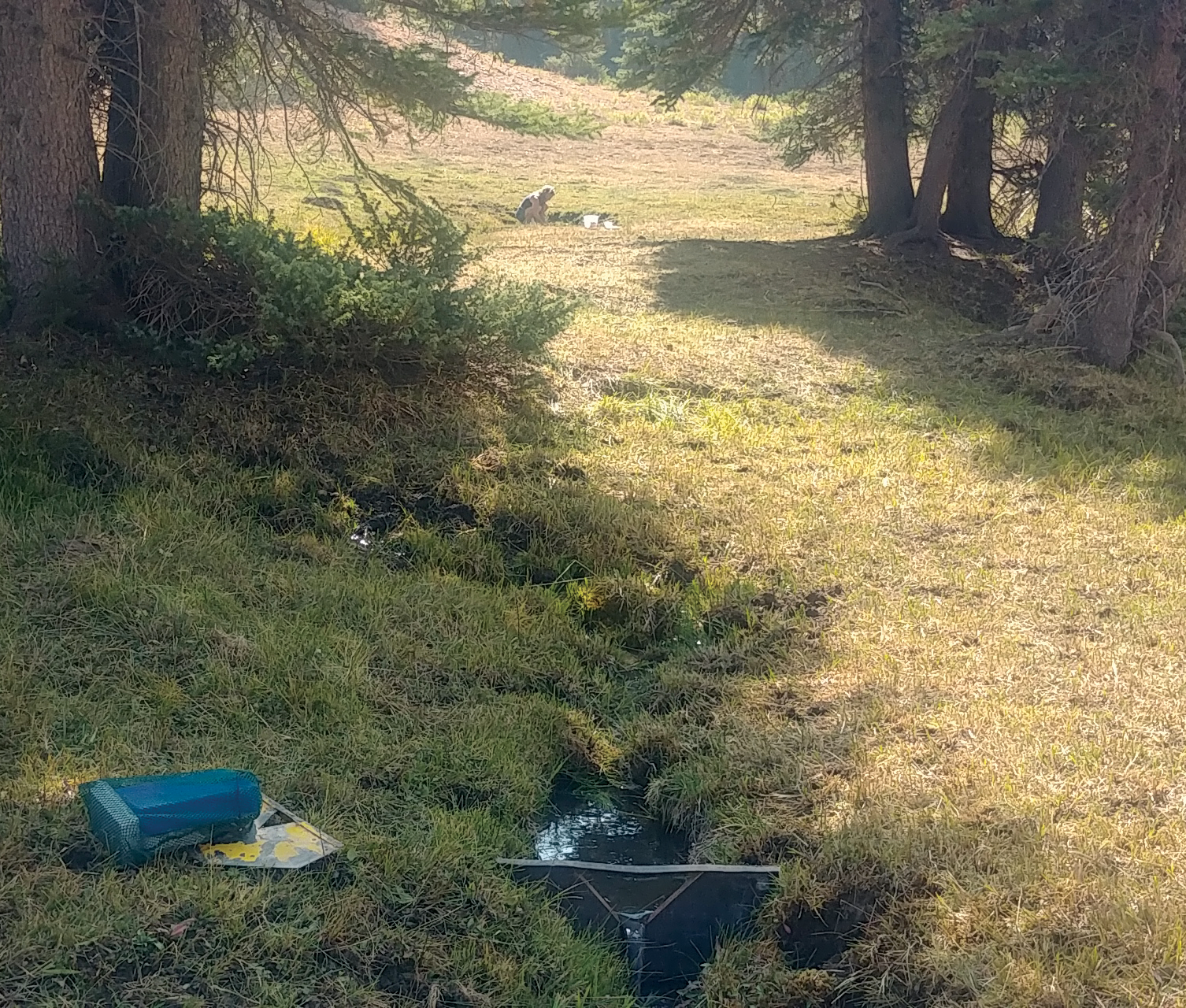 Capturing spring flow and collecting water samples of a spring at the headwaters of the East Fork Sevier River.

To shed light on the groundwater–surface-water relationship, we measured flow in streams and canals, including the Tropic Ditch, and measured water levels in wells to generate a map that shows contours of water-level elevations used to help understand groundwater flow in the valley. We collected geochemistry and stable isotope data from wells, springs, and streams in the area to characterize water quality and to determine how groundwater and surface water interact. We used the radiogenic isotope data to determine how long the water has been in the groundwater system.

Seepage runs consist of measuring flow at multiple points along streams and canals to determine where water seeps from the stream into the ground or from the ground into the stream. The difference between flow at the upstream and downstream ends of a stream reach is assumed to be due to seepage. During most irrigation seasons, the entirety of the East Fork Sevier River is diverted into the Tropic Ditch, which for about a century has transported water through Water Canyon within BCNP to irrigate crops in the nearby town of Tropic. The Tropic Ditch is unusual in that it transports water across a major hydrographic boundary. Unimpeded, the East Fork Sevier River flows toward Sevier Lake, a terminal lake within the Great Basin to the west. However, water flowing in the Tropic Ditch ends up in the Paria River drainage, which flows southeastward to the Colorado River and ultimately the Gulf of California. During one of the seepage runs after the heavy snowpack of winter 2019, we measured over half the total flow of the East Fork Sevier River continuing past the Tropic Ditch diversion point during irrigation season. By the time the East Fork Sevier River reached the downstream boundary of the study area, 75 percent of its flow was lost to groundwater, recharging the valley-fill aquifer.

Water levels were measured in wells across four seasons from 2018 to 2020. Winter snowpack was far below average in 2018, far above average in 2019, and average in 2020. The heavy 2019 snowpack, followed by a normal snowpack in 2020, resulted in increased water levels in many valley-fill aquifer wells. Over half the valley-fill wells had water-level increases of at least 10 feet. Water levels in wells completed in bedrock aquifers were less variable than wells completed in valley fill, with some water levels declining and others rising during different seasons and years, weather independent. Water-level increases in valley-fill wells after heavier winter snowpack indicates the valley-fill aquifer is more sensitive to precipitation via surface water runoff and direct infiltration than the bedrock aquifers. 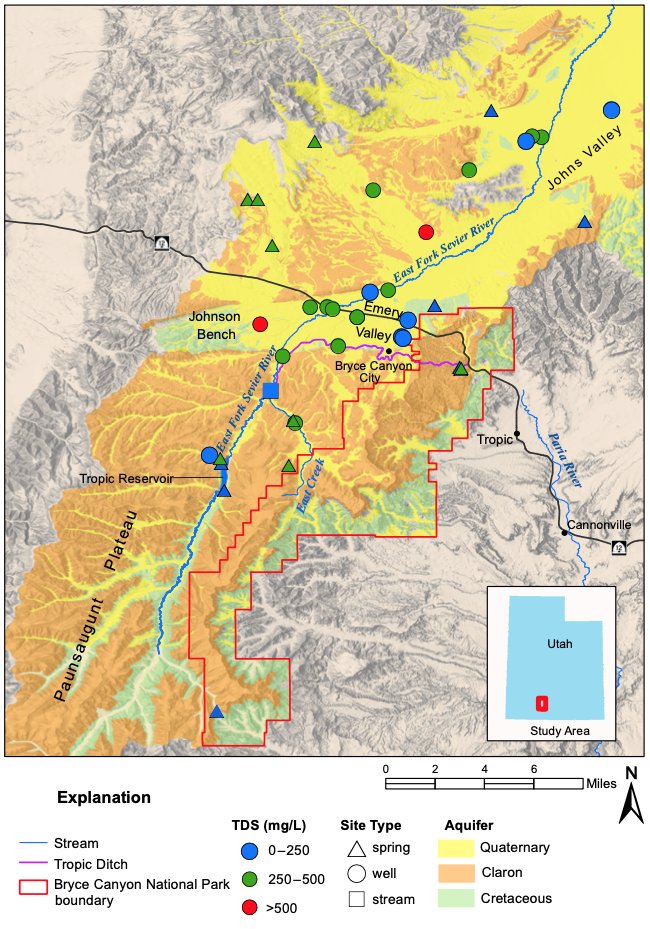 The UGS evaluated water quality in streams, wells, and springs in 2018 and 2019. Sample collection focused on characterizing the valley-wide major solute chemistry and measuring nitrate concentrations. Major solute chemistry is characterized as calcium-magnesium bicarbonate type. Overall water quality, defined here as the amount of total dissolved solids (TDS), is excellent in the valley-fill and Claron Formation aquifers and is classified as Pristine (less than 500 milligrams per liter [mg/L] TDS) based on the Utah Division of Water Quality Board’s groundwater quality classification scheme. Water from the older Cretaceous sandstone aquifers underlying the valley fill has slightly higher TDS and is considered Drinking Water quality (between 500 and 3,000 mg/L TDS). With continued population growth and installation of septic tank soil-absorption systems in new developments, the potential for nitrate contamination will increase. The UGS modeled the impact of septic tanks on groundwater and recommended that advanced large underground wastewater disposal systems be utilized instead of individual septic tank systems to limit the increase in mean nitrate concentration above the current valley-wide background nitrate concentration of 0.35 mg/L.

The water quality samples collected in 2018 and 2019 were also analyzed for stable and radiogenic isotopes. Stable isotope composition of hydrogen and oxygen in water molecules can be used to determine the source and timing of recharge of groundwater and how surface water and groundwater interact. Our results show an evaporative signal in the alluvial aquifer, as well as a considerable overlap between the isotopic signature of surface water and the valley-fill aquifer, suggesting shallow recharge from streams. Conversely, the isotopic signature of water from the Cretaceous aquifer shows little evidence of evaporation or connection to surface water. We applied radiometric dating using carbon and tritium (an isotope of hydrogen) to water samples from wells and springs in the study area to obtain a semi-quantitative residence time, or age, of groundwater. Most samples from the valley-fill aquifer and Claron Formation contained tritium in quantities indicating that groundwater is modern, recharged after about 1950. Samples from the underlying Cretaceous-age bedrock aquifer were much older, with radiocarbon ages ranging from approximately 5,000 to 9,000 years before present. The water supply for BCNP and Bryce Canyon City is modern groundwater from the valley-fill aquifer. The widespread presence of modern groundwater in the valley-fill and Claron Formation aquifers suggests these aquifers are actively recharged and thus sensitive to snowpack levels and climate change, as well as susceptible to surface-based contamination sources. 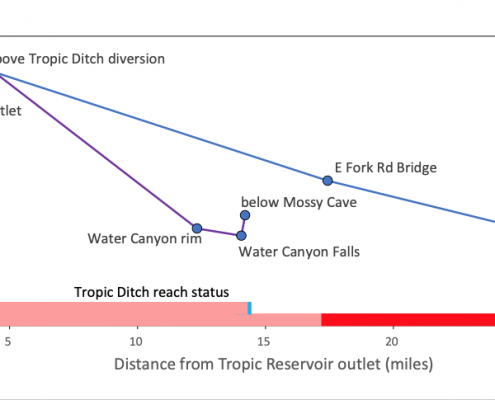 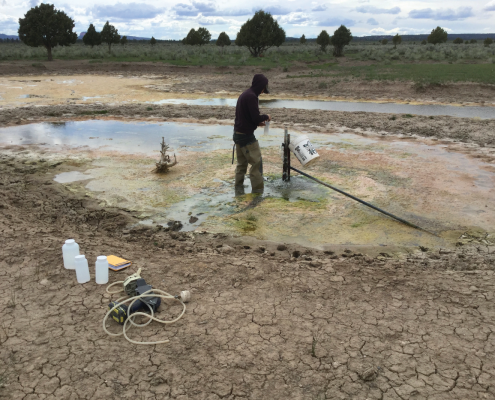 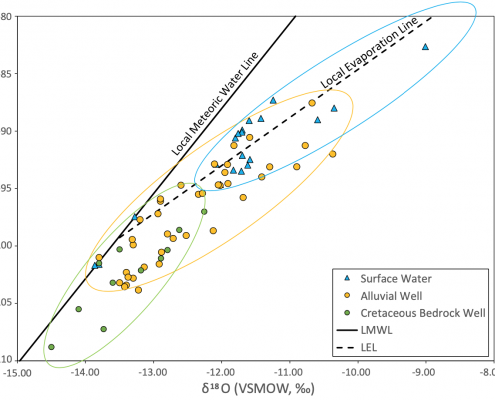 Water quality, quantity, and the potential for water-quality degradation are critical elements that may determine the extent and nature of future development in Johns and Emery Valleys in the vicinity of Bryce Canyon National Park. Our data show a connection between surface water and groundwater in the valley-fill aquifer based on shared geochemical characteristics, isotopic tracer signatures, increases in water levels in wells in direct response to heavy precipitation seasons, and seepage run measurements showing streams with distinct gaining and losing reaches. Because of the potential increase in growth from tourism-related development, an increased demand on drinking water warrants continued research that will assist land-use planning and resource management to preserve local water resources. Over the next two years, the UGS will continue to study the interaction between groundwater and surface water in the study area by constraining recharge and discharge to develop a water budget. 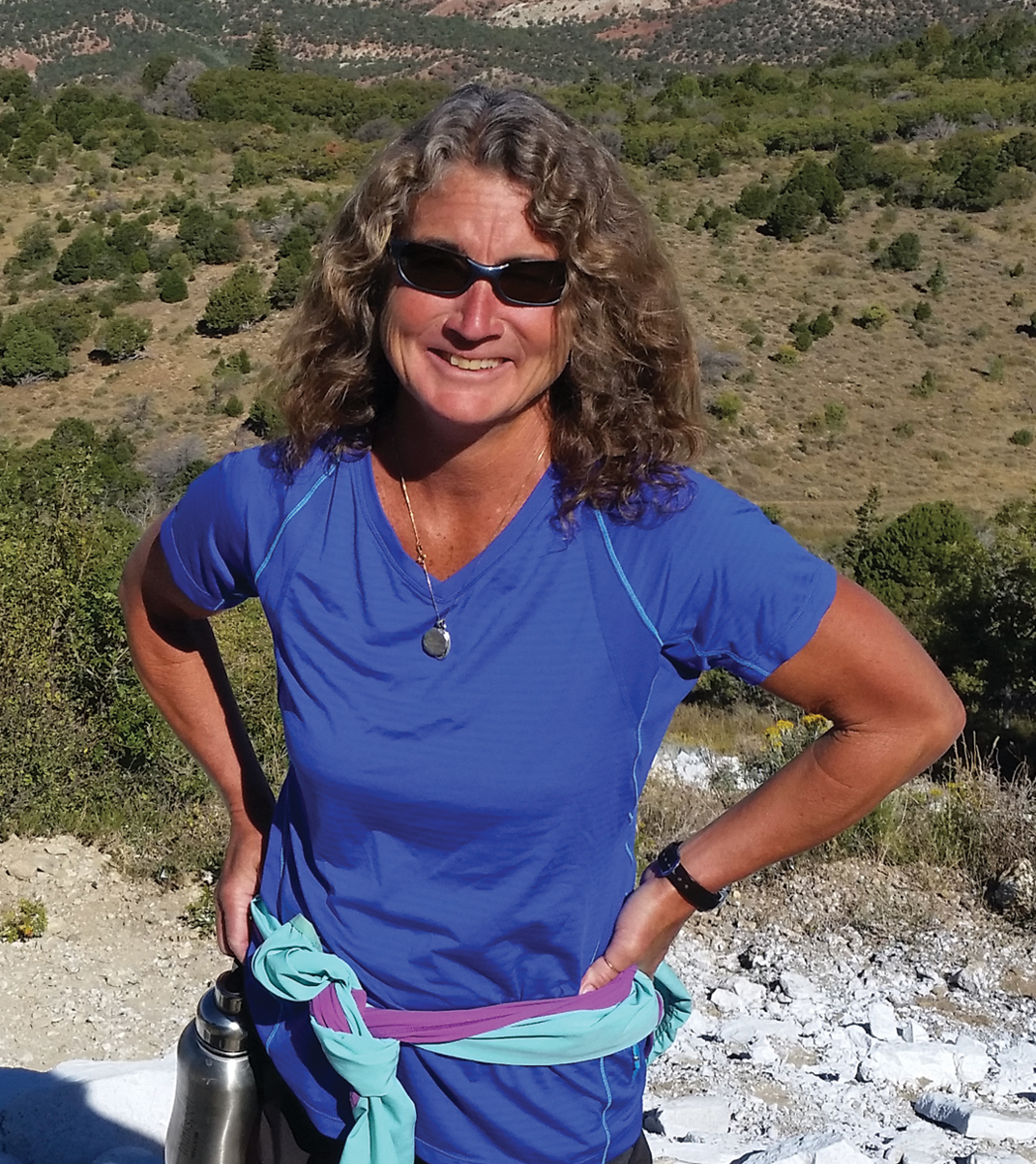 is a Utah licensed professional geologist and Senior Scientist for the Utah Geological Survey. She received her B.S. in geology from the University of Utah in Salt Lake City and M.S. in geology from Northern Arizona University in Flagstaff. She has been employed with the UGS in the Groundwater and Wetlands Program since 1996. Her principal duties include groundwater-quality projects, with an emphasis on petitioning and classifying aquifers across the state, elevated nitrate concentrations in rural valleys, septic-tank density recommendation maps, environmental tracer analysis, pesticide sensitivity and vulnerability maps, and water well-cuttings’ analysis. Current projects include characterizing the hydrogeology of the Bryce Canyon area and monitoring hydrologic changes in the Montezuma watershed in southeast Utah. 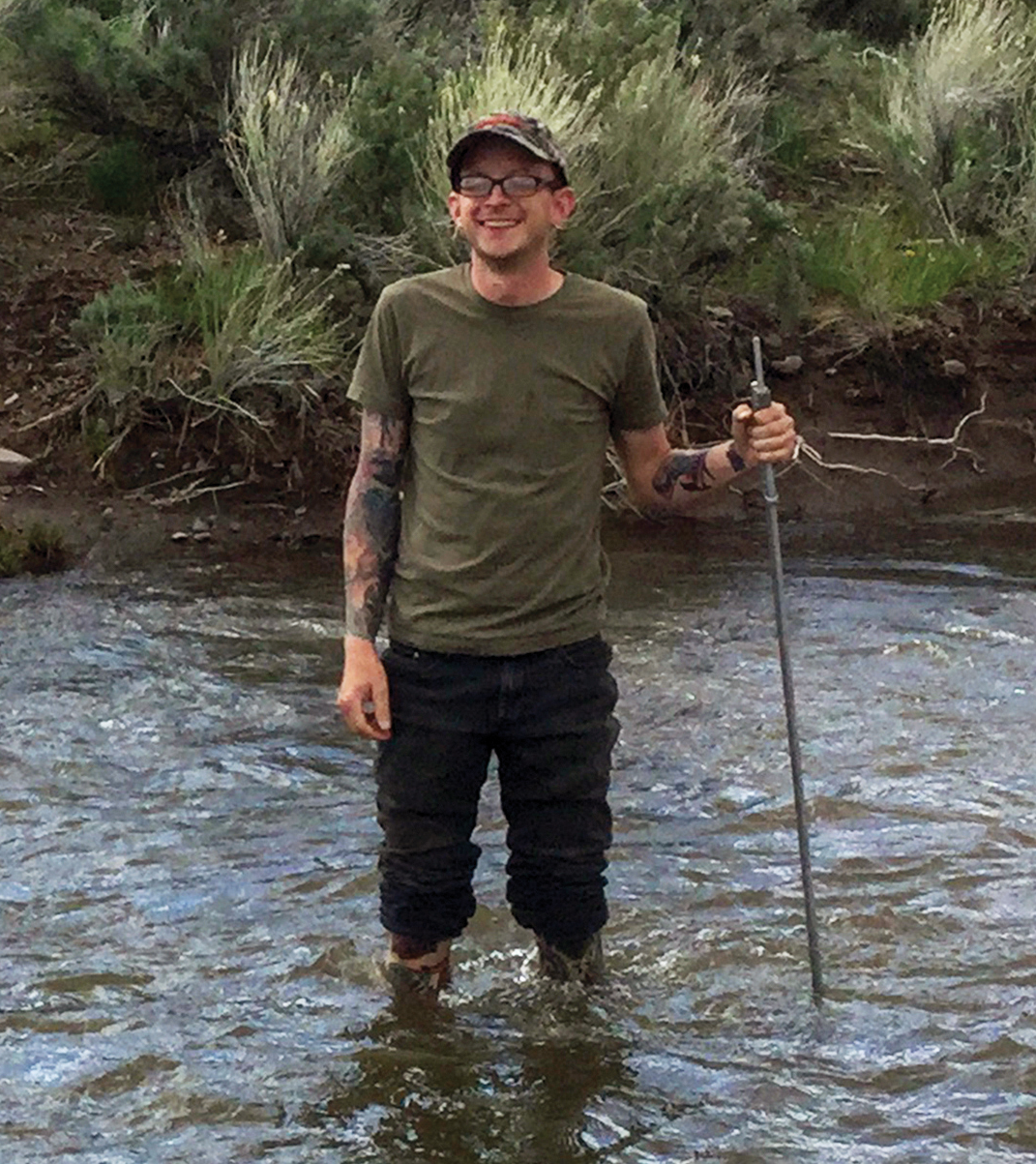 is a hydrogeologist in the Groundwater and Wetlands Program. Since joining the UGS in 2018, Trevor’s work has focused on applying geochemistry to groundwater issues, including water budgets, aquifer characterization, and small- to large-scale watershed restoration projects.