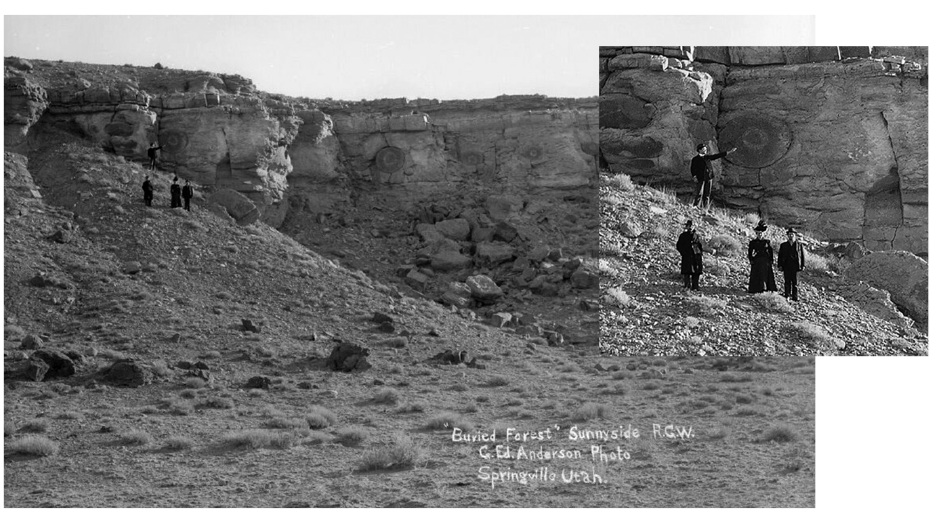 Near the start of the 20th century, a Utah photographer captured an image he labeled “Buried Forest,” perhaps thinking multiple large circular objects exposed in the cliff face were petrified logs (spoiler alert, they were not). Recently, rediscovery of the “Buried Forest” concretions came at the right time to give folks in Carbon County a distraction from COVID-19 confinement. Price, Utah, resident Scott Wheeler’s curiosity to find the location of an old black-and-white photo and his desire to share the historic and geologic find with others led to its eventual designation by the U.S. Bureau of Land Management (BLM) as an interpretive site.

The photo, taken circa 1899, shows large spheres of rock up to 8 feet in diameter embedded in a cliff that photographer George Edward Anderson had deemed the “Buried Forest.” Anderson identified the location as Sunnyside, which we know today as a town at the base of the Book Cliffs. After months of work, Scott, with the help of Google Earth and friend Alan Peterson, found the cliff 10 miles to the southwest in the Mounds area above Grassy Trail Creek, a tributary to the Price River. Discovering that Mounds had been called Sunnyside in the 1800s, they were able to hone in on the correct location.

In less than a year, the Carbon County Trail Committee and the BLM worked with Scott to provide visitors improved access, a trailhead kiosk, and a rudimentary trail that leads less than a mile to the site of the original photo. Since then, locals and out-of-towners alike have been making the 2 mile out-and-back trek to inspect the mystery.

On close inspection, the apparent ends of petrified logs are really the cross sections of large balls of rock commonly known as cannonball concretions. They were formed in a shallow marine environment at the edge of a Cretaceous-age seaway 90 million years ago, in sediments that would eventually comprise the Ferron Sandstone Member of the Mancos Shale. They are virtually the same as the cannonball concretions of the Molen Reef on the west side of the San Rafael Swell near Emery, Utah (see Survey Notes, v. 47, no. 3). 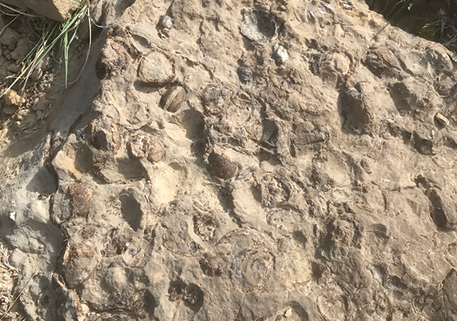 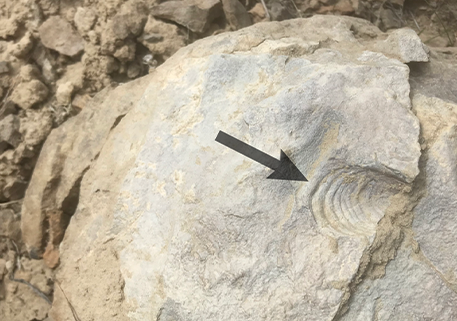 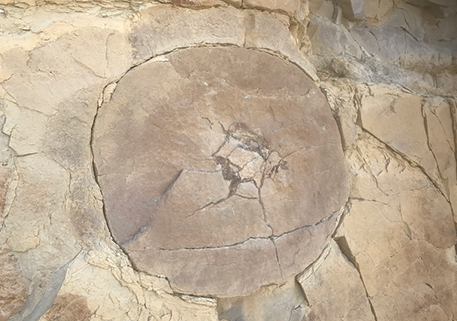 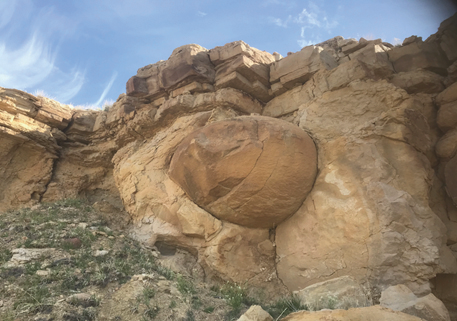 How did these concretions form? This is a bit of a mystery, at least in the details. Imagine clusters and beds of bivalve mollusks such as clams and oysters residing in the sandy bottom of the shallow waters at the edge of the Cretaceous Seaway. Eventually the wet sand and fossils became rock, as calcium ions circulating in groundwater between the sand grains precipitated calcium carbonate (calcite). This process cemented the sand grains together aided by the pressure of additional sediment deposited above. The concretions formed as the calcium ions were preferentially and chemically drawn to organic matter such as the clusters of dead clams and their shells. The organic matter formed a nucleus around which the spherical concretions could grow.

Later, strong forces, including tectonic deformation and de-pressuring by erosion (removal of overlying rock), fractured the sandstone, coincidentally splitting the concretions at this location. Over the last few million years, uplift and erosion of the Colorado Plateau exposed the rock layers of this ancient shallow marine environment and the concretions within. The concretions, being more highly cemented than the surrounding rock, have been preferentially preserved as evidenced by the numerous large fragments scattered along the base of the cliff. 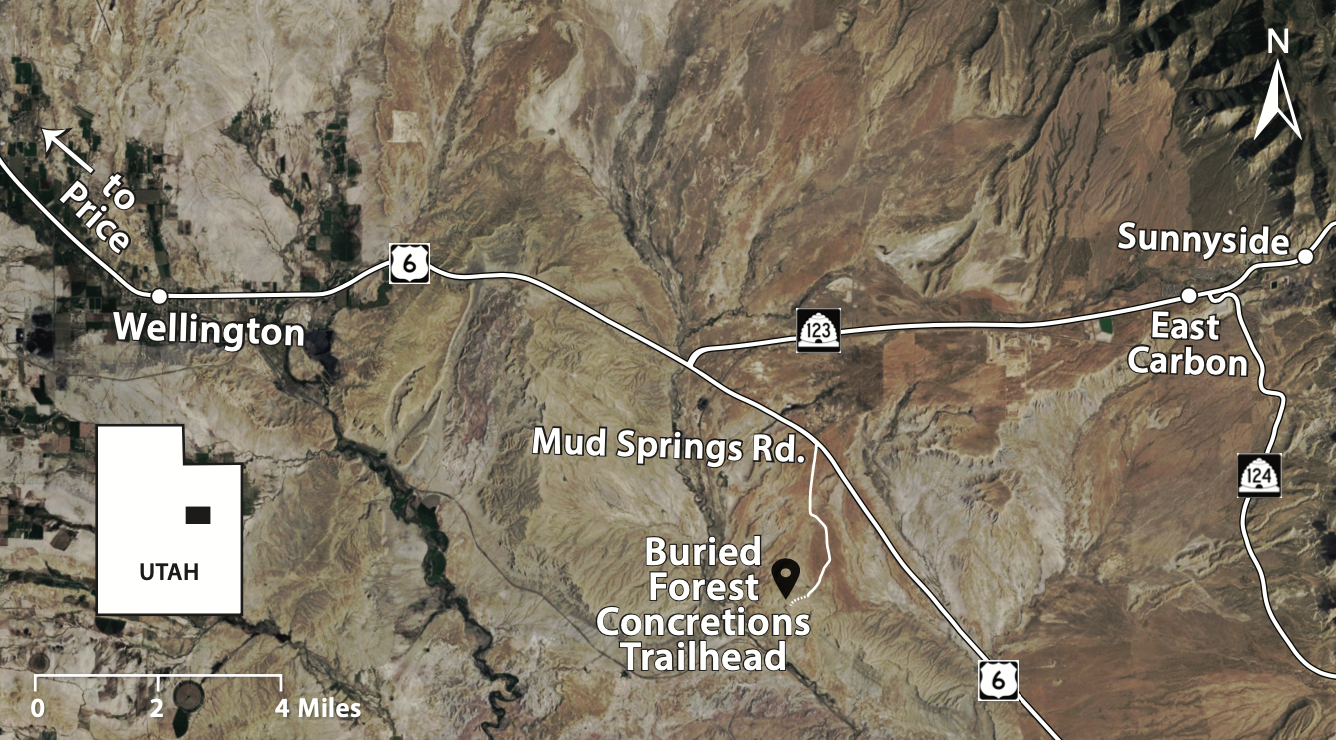 Drive approximately 18 miles southeast from Price on U.S. Route 6 to the Mud Springs Road, which is about 2.5 miles past the East Carbon turnoff (SR-123) at the top of the hill on the right. Mud Springs Road is unsigned. Watch for fast moving traffic as you slow down to make this turn. After a short distance, turn left at the junction with a kiosk and map. Continue on the gravel road for about 3 miles following the signs to the “Buried Forest Concretions” trailhead. Park and hike the trail. The trailhead’s coordinates are 39.4688° N, 110.5428° W.