Glad You Asked: Does the UGS Library House Any Remarkable Rare Books?

Yes, the UGS Library has several rare volumes in our collection, and we regularly receive donations of library materials to add to our collection. In 2020 the Montana Bureau of Mines and Geology sent us a generous gift of numerous Utah geology publications. Included in this donation was quite a treasure—a nearly perfect original of U.S. Geological Survey (USGS) Monograph 1 titled Lake Bonneville by Grove Karl (G. K.) Gilbert, published in 1890. This rare acquisition is a pivotal publication on Utah geology. We are excited to add this book to our library collection.

Lake Bonneville is a large-format book with 438 pages and includes 51 plates, some in color, which is quite unusual for a book of its age. Many of the plates are thematic maps illustrating various aspects of Gilbert’s exploration of Lake Bonneville features. Several of the plates are beautiful sketches of landscapes throughout the Bonneville basin done by talented assistants on Gilbert’s team. One of the highlights is a large color map of Lake Bonneville that is folded into a pocket at the back of the book. It is interesting to note that Lake Bonneville was actually the 15th monograph published by the USGS, but was assigned as Monograph I when the publication originally assigned the first number was never completed.

Lake Bonneville was an enormous freshwater lake that existed from about 30,000 to 13,000 years ago. During this time the climate was much cooler and wetter than it is now. As with Great Salt Lake, which is a remnant of the ancient lake, Lake Bonneville was a terminal lake with no outlet until it breached its threshold near Red Rock Pass, Idaho. After the lake level dropped over 300 feet during the catastrophic Bonneville Flood, the lake then intermittently drained to the Pacific Ocean for a few thousand years before receding below the new threshold and eventually reaching Great Salt Lake levels around 13,000 years ago. At its largest extent, about 18,000 years ago, Lake Bonneville covered an area of almost 20,000 square miles and was about 325 miles long, 135 miles wide, and over 1,000 feet deep. The shorelines of Lake Bonneville are easily seen along the mountains that rimmed the lake, including the Wasatch Range of northern Utah, and islands within the lake, such as Antelope Island. The three most prominent shorelines, which Gilbert named the Bonneville, Provo, and Stansbury, were a major focus of the research documented in Lake Bonneville. 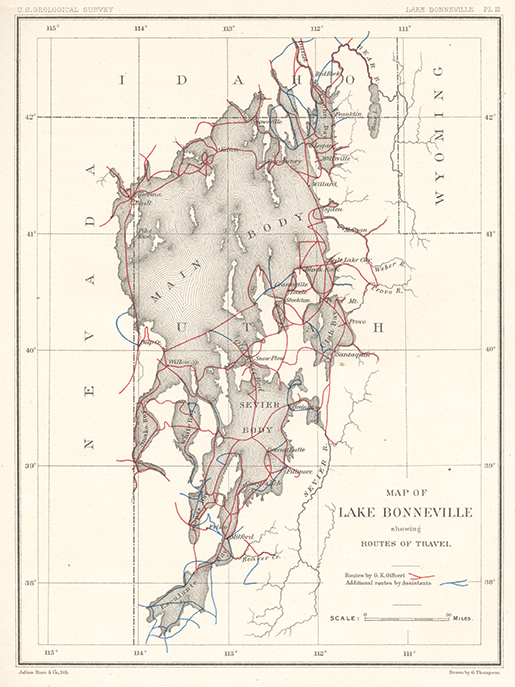 G.K. Gilbert (1843–1918) is considered one of the greatest American geologists. He made numerous contributions to the field of geology, and Utah and Lake Bonneville were two major study areas in his career. Gilbert was born in Rochester, New York, near the shores of Lake Ontario. He graduated from the University of Rochester in 1862. Gilbert’s first experience in the West was working as a geologist with the U.S. government-sponsored Wheeler Survey from 1871 to 1874. In 1874, he joined the Powell Survey and spent the next three years exploring the Great Basin of Utah and Nevada. In 1879, Gilbert was named Chief of the Great Basin Division of the newly formed U.S. Geological Survey. This gave him the opportunity to study ancient Lake Bonneville, which had interested him since his days with the Wheeler Survey, in greater detail. Gilbert gives credit to several earlier explorers who recognized the existence of a prehistoric lake in the eastern Great Basin, including Clarence King, Arnold Hague, and Samuel Emmons, the geologists of the Fortieth Parallel Survey, who Gilbert stated should have had naming rights based on their exploration dates. However, their publication was delayed, and Gilbert claimed the right. He named the lake in reports for the Wheeler Survey, published in 1874 and 1875, in honor of Captain B.L.E. de Bonneville who described Great Salt Lake in 1833. Gilbert’s first major publication on the topic was a report to the USGS titled “Contributions to the History of Lake Bonneville” in 1882.

Gilbert considered Monograph 1 his masterwork. In addition to the groundbreaking study of the geologic history and features of Lake Bonneville, the volume includes at least two major contributions to structural geology. One of these is the recognition of repeated displacement along faults of the Wasatch Front. Gilbert was the first to recognize the earthquake hazard represented by these faults, and wrote a letter published in The Salt Lake Daily Tribune in 1883 warning local residents about the implications of the fault scarps that he observed along the foot of the Wasatch Range.  Another contribution is the description of “isostatic rebound.” Gilbert noted that the lakebed had risen in elevation and domed upward as the lake receded and the weight on Earth’s crust was lessened. Many of Gilbert’s observations have stood the test of time and have been supported by subsequent scientific studies.

We are excited to share this geologic artifact of Western Americana with you. The book can be viewed onsite at the UGS Library by appointment only. Call 801-537-3333 or email, ugslibrary@utah.gov, to schedule an appointment. 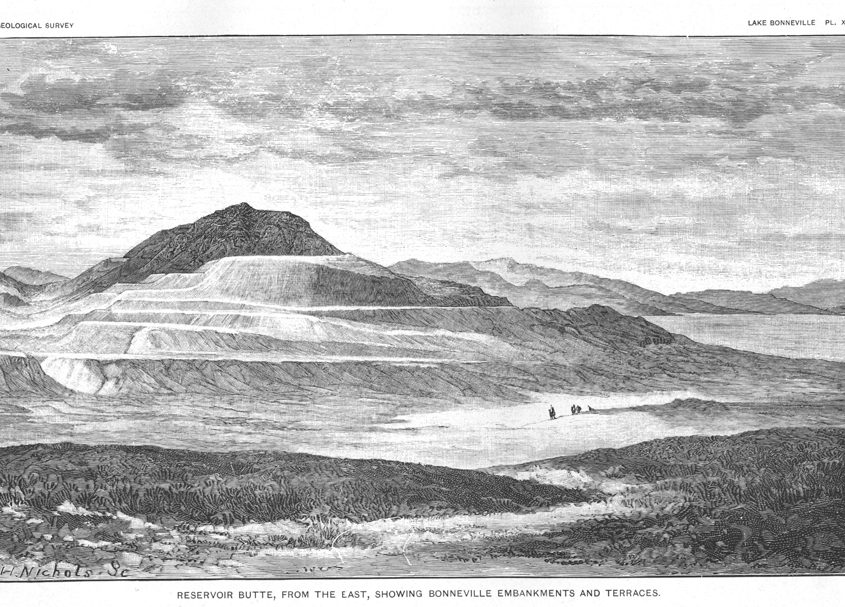 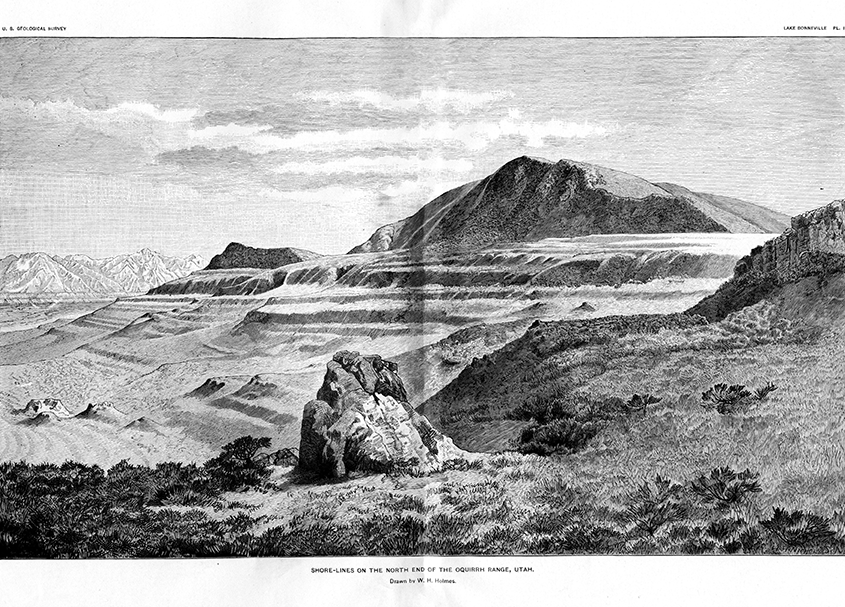