Glad You Asked: What Are Those Blue Ponds Near Moab?

If you have ever visited Dead Horse Point State Park, you may have noticed bright blue ponds glistening off to the east. These are not a mirage but are solar evaporation ponds used in the process of mining potash. The mine is currently owned and operated by Intrepid Potash Inc., and the ponds cover about 400 acres of land 20 miles southwest of Moab. 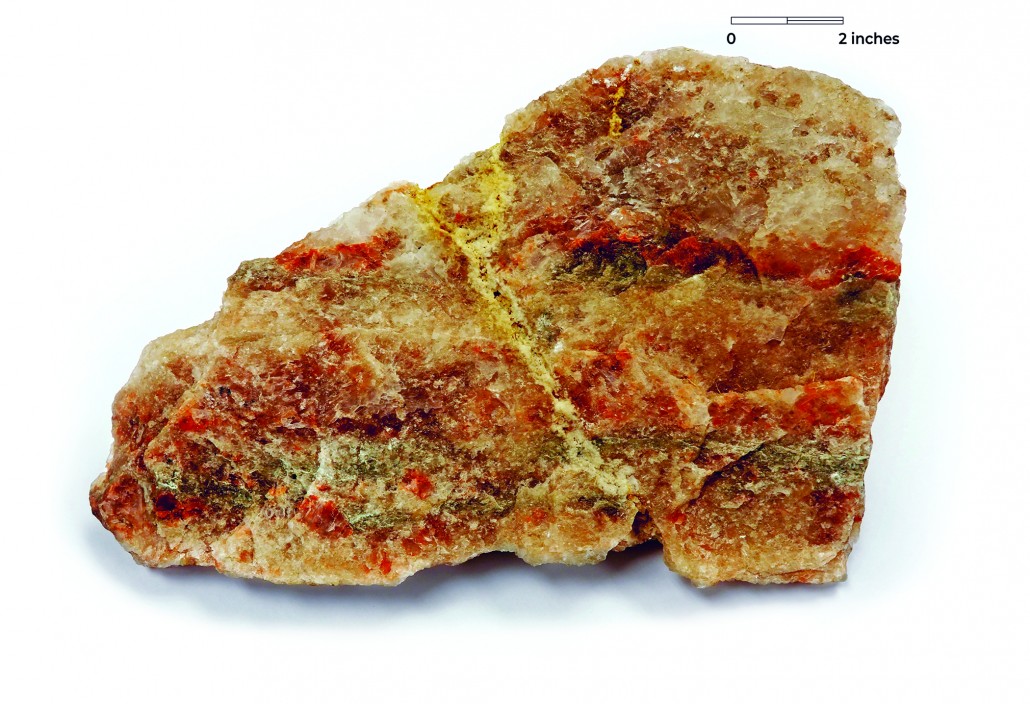 Potash, a water-soluble potassium salt, is solution mined from the Paradox Formation more than 3,000 feet below the ground. Water from the Colorado River is injected down through a well into the potash-bearing strata, where it dissolves the salts. The resulting brine is extracted from a different well and pumped into the evaporation ponds. Blue dye is added to the water to enhance evaporation. The dye increases the absorption of sunlight and therefore increases the rate of evaporation. As evaporation progresses, the ponds become shallower and turn shades of light blue while the potash precipitates out of solution and is deposited on the bottom of the pond. The ponds turn a tannish brown color when nearly all the water has evaporated and the potash is ready to be harvested. 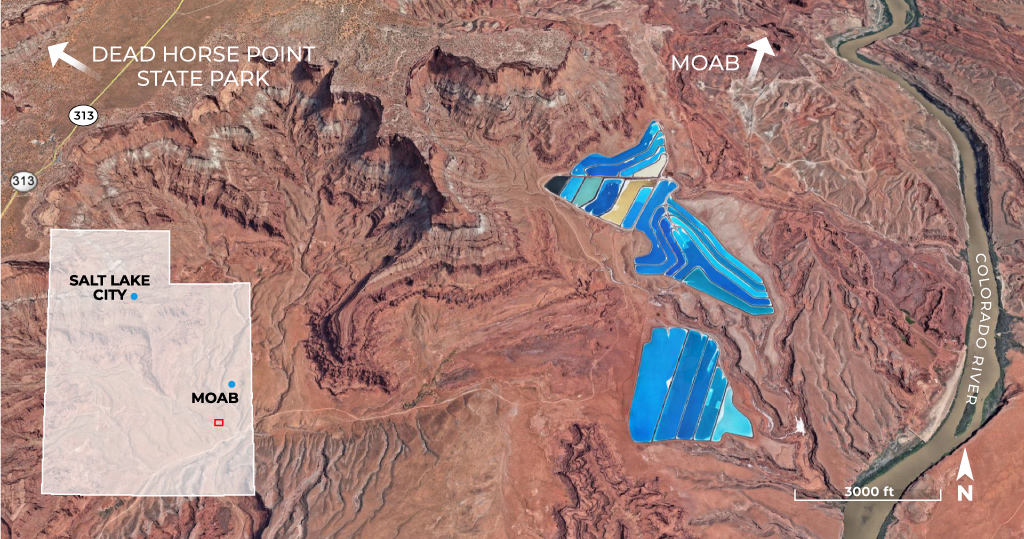 “Potash” is a general term that refers to a variety of potassium salts, such as potassium chloride (KCl), that are mainly used in fertilizer products, but also in the production of soap, glass, ceramics, and batteries. Historically, the term refers to potassium carbonate (KCO3), which is obtained by combining ash from burned plant material (usually hardwood trees) with water in large iron pots. Through evaporating and leaching of the “pot ash,” a residue of potassium carbonate is left behind that historically was used in the process of making soap or glass and ceramic products as early as A.D. 500. In North America in the 17th and 18th centuries, potash became an important industrial chemical and agricultural commodity. Large asheries were built to process the timber cleared and burned by settlers as they expanded westward across the U.S. By the mid-19th century, however, asheries became obsolete after a large deposit of natural potash was discovered in Germany and the birth of potash mining began. Natural potash deposits occur all over the world, but the largest reserves are in Canada. Other significant deposits are in Russia, Belarus, China, Israel, Jordan, and the U.S. 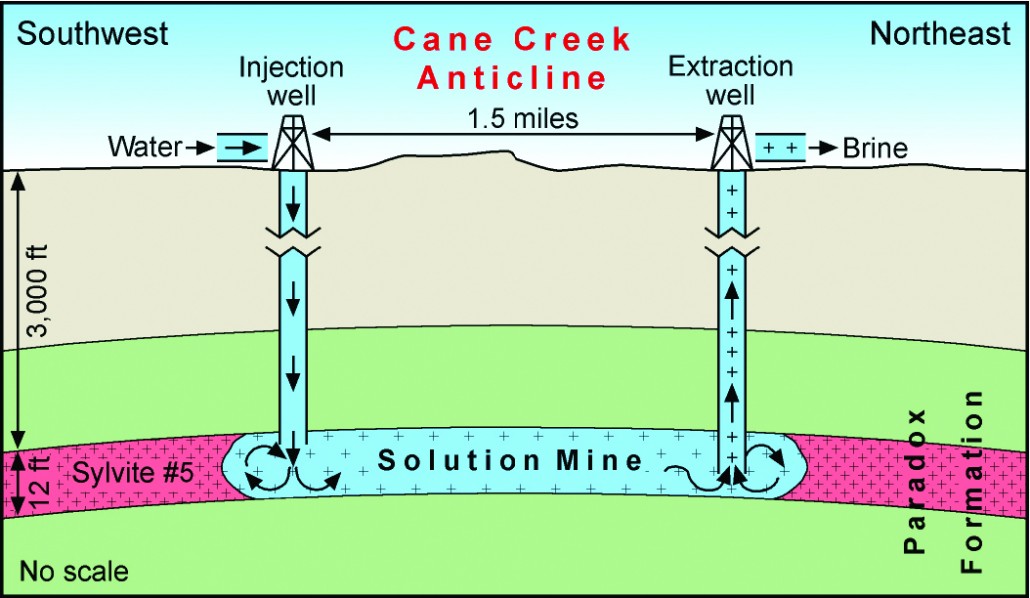 The potash mined near Moab is from the Pennsylvanian-age Paradox Formation, which was deposited between 315 and 310 million years ago in the Paradox Basin. During the Pennsylvanian period, the basin was an embayment to a large ocean and experienced cycles of open-marine conditions with freely circulating ocean water and restricted-marine conditions where access to the open ocean was blocked. During open-marine conditions, layers of shale, siltstone, limestone, and dolomite were deposited. When the basin was closed, the hot and dry climate during this time led to high rates of evaporation, and layers of salt were deposited. The salt is mostly halite (NaCl), but layers of sylvite (KCl) and carnallite (KMgCl3.6H2O) were also deposited.

Geologists have identified at least 29 cycles in the Paradox Formation, each represented by a specific sequence of sedimentary and evaporite rock layers, though only 18 cycles are known to contain potash minerals and only a few of those may have economically viable deposits. Individual salt deposits can be up to 1,000 feet thick in some places in the basin. Under the pressure of overlying strata, salt becomes ductile and because it is less dense than other rocks, it moves upward creating folds and diapirs. The Cane Creek anticline, in which the Intrepid potash mine is located, is a large, broad fold created by salt moving upward and bowing the rock layers above it. The potash mined by Intrepid is from Paradox Formation salt cycles number 5 and 9, which occur near the top of the formation. The salt is about 200 feet thick in cycle 5 and about 150 feet thick in cycle 9. The mined potash zone within each cycle, however, is much thinner, typically less than 10 feet thick. 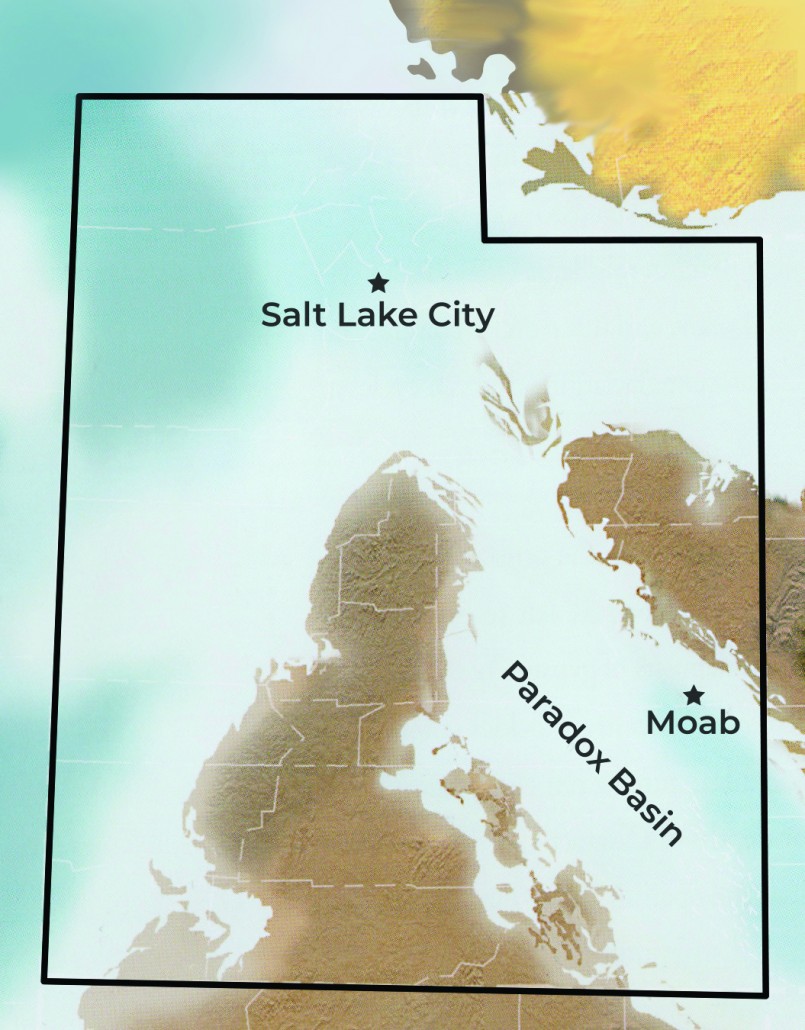 Paleogeographic map of Utah during the Pennsylvanian period, approximately 308 million years ago, showing the Paradox Basin as an embayment to a western ocean (map modified from Ancient Landscapes of the Colorado Plateau by Ron Blakey and Wayne Ranney).

Though the cyclic deposits of the Paradox Formation were discovered in the 1920s, it was not until the mid-1950s during exploration for oil and natural gas that a potential economic potash resource was discovered within the Cane Creek anticline. By the early 1960s, the Texas Gulf Sulfur Company had built an underground mine and began room-and-pillar mining the potash from cycle number 5. Before operations began in 1964, however, an explosion of methane gas trapped 23 men, 18 of which were killed, during construction of the mine.

Because of hazardous gas pockets, high mine temperatures, and the thin, contorted, and difficult-to-mine potash layer, the operation was converted to solution mining in 1970.

The U.S. Geological Survey estimates that the Paradox Basin contains around 2 billion tons of potash resource, though depth to the resource (more than 5,000 feet in some areas) and complex geology have made exploration for economic deposits challenging. The current market price for potassium chloride, the most commonly produced form of potash, is about $200 per short ton, but price has been quite variable in the last decade. Intrepid’s capacity is about 100,000 short tons per year of potassium chloride, from their Moab operation, which is the only potash mine in the basin. Intrepid’s Moab operation along with two other operations in other parts of Utah (see Survey Notes, v. 44, no. 3, p. 1-3) produced 444,000 short tons of potash in 2017 (which includes both potassium chloride and potassium sulfate), the value of which was approximately $210 million. Utah and New Mexico are the only two states that currently produce potash. Because potassium is an essential nutrient for life and there is no substitute, potash mining in Utah likely has a bright and long future.