Summary of Springhill Landslide Movement and Conditions in 2010

This section summarizes landslide conditions from January 20 through December 7, 2010. Precipitation for the water year is also discussed. 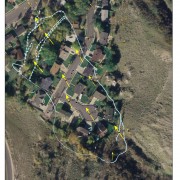 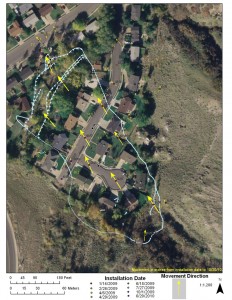 The landslide was active in 2010 and had been continuously moving at a very slow rate since at least January 2008. Measurements indicate that different parts of the landslide were moving at slightly different rates. In general, the landslide moved to the northwest, toward Valley View Drive. Ground deformation measurements were collected from survey markers using a steel measuring tape and a survey-grade GPS instrument, depending on location.

Measurement of the cumulative shorting of the landslide at the toe has been complicated because of the destruction and re-establishment of several survey stakes as the result of tree removal at the site. Cumulative shortening across the toe of the landslide (located in Lot 157 Valley View Drive) between late January and June 29 was about 4.9 inches. Destruction of our survey stakes resulted in a gap in our data from June 29 until August 23 when the stakes were re-established. From August 23 until December 7, movement at the toe was about 3.7 inches. Therefore, the total landslide movement at the toe since late January is not precisely known, but is estimated to be greater than 8.6 inches.

The table and index map below summarizes total measured ground deformation in 2010.

Change in the Rate of Movement

Monitoring showed consistently slow movement of the landslide since at least 2008.  Repeated monitoring of the rate of movement (the rate of change observed between measurement intervals) allows us to assess changes in these movement rates.

Fluctuations in the seasonal peak ground-water level (SPGWL) provide a relative measure of the landslide’s stability. Between 1999 and 2010, the SPGWLs in the four wells in Springhill Drive typically occurred in the first six months of the year, suggesting ground-water levels rise in response to snowmelt and spring precipitation (generally the wettest months of the year are March through May). A comparison of groundwater levels and precipitation patterns in 2010 show this same relationship.