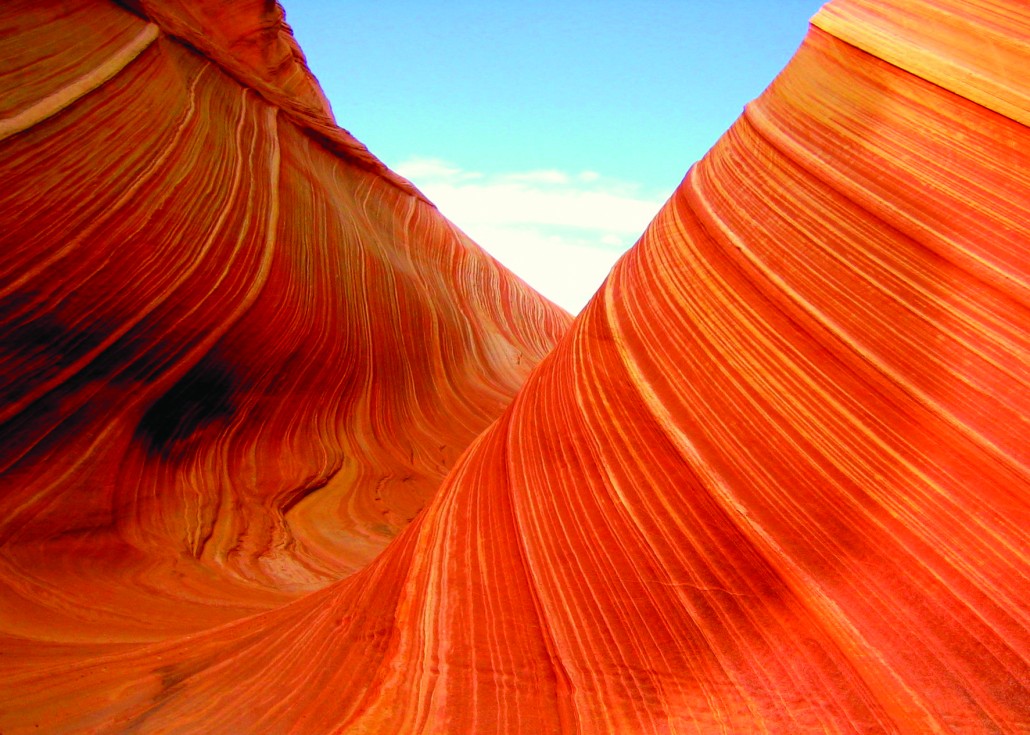 Utah’s Colorado Plateau is famous for its striking vistas and dazzling colors. Hues of red, pink, maroon, yellow, brown, and white create an array of stunning rock colors that attract visitors from all over the globe. From the red rocks of the Navajo Sandstone to the Vermilion Cliffs of the Moenave and Kayenta Formations to the pink, crimson, and chocolate cliffs of the upper Grand Staircase, many who visit the Colorado Plateau wonder what gives the rocks their brilliant colors. This question has spurred much research by geologists, involving chemical and physical analysis. The answers can be complicated, as many different minerals can cause coloration in rocks; however, for the most part, the red, pink, yellow, and brown colors of Utah’s “Red Rock Country” simply comes down to one element—iron.

Since minerals form the basis for many pigments and dyes, it should be no surprise that they are also responsible for the coloration of rocks. Of all the common colorful minerals found in Earth’s crust, few are as abundant, dynamic, and multi-colored as iron. Depending on how it combines with other elements, iron can form a veritable rainbow of colors. When iron combines with oxygen it becomes iron oxide, and its degree of oxidation largely determines its color. Ochre, a mixture of clay, sand, and iron oxide, has been one of the most commonly mined mineral pigments for tens of thousands of years and is composed of the same minerals that often color rocks. Obtained from iron-bearing clays, ochre can produce several colors and hues that are used as natural coloring agents. Red ochre comes from hematite (Fe2O3), a mineral named for the same Greek root word for blood, and has long been used as a red pigment. Some iron oxides, when hydrated (combined with hydrogen and oxygen), can form bright yellows such as yellow ochre which comes from the mineral limonite (FeO(OH)+H2O). Brown ochre comes from the mineral goethite (FeO(OH)) and is a partially hydrated iron oxide. Iron can also form black pigments from minerals such as magnetite (Fe3O4), or even blue and green hues from minerals such as glauconite and illite. For the most part, these iron minerals, and particularly hematite, are responsible for coloring the Colorado Plateau’s sedimentary rock layers. 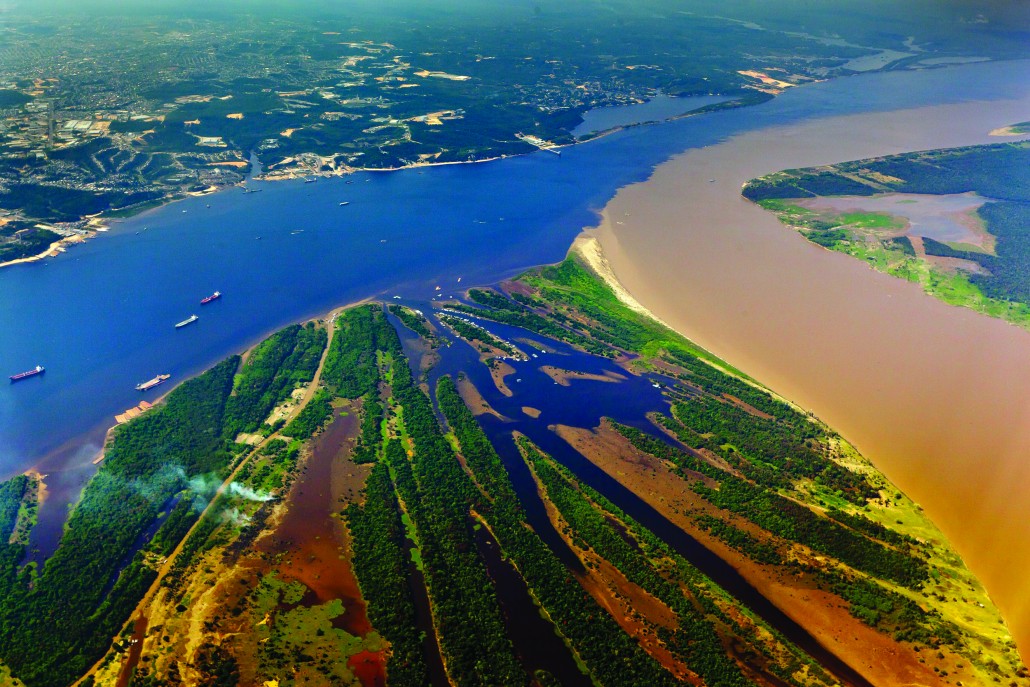 The Amazon River’s “meeting of waters” is a fantastic example of the different water chemistries likely responsible for the coloration of ancient sediments. The Rio Negro, a tributary of the Amazon, is a “blackwater” river which is clear, slightly acidic, and contains high concentrations of reduced iron. The Amazon, however, has lower concentrations of iron and dissolved solids, but a higher sediment load and oxidized iron giving it its reddish-brown color. (Photo credit Gabriel Heusi, Wikimedia, Creative Commons license.)

Researchers have questioned how the pigment-bearing iron minerals get into rocks like sandstone and shale as well as how the minerals are dispersed within the rock. One might suspect that the brightly colored minerals might be sprinkled throughout the sand and clays or cements that composed the sandstone and shale units—something like chili powder, evenly mixed within the salt. However, by looking at thinly cut sections of rock under a microscope, it becomes clear that this is typically not the case in Utah’s Color Country rock. Instead, the very sand grains that form the matrix of the rock units are actually “frosted” or coated with a layer of iron-rich mineralization. These grains are then cemented together with a pale to white calcite or silicate glue. In the case of sandstone units like the prominent Navajo or Wingate Sandstone, the sand is composed almost entirely of translucent or white quartz grains that are coated with a thin veneer of red hematite mineralization. Although the exact timing is debated among geologists, this “coating” of iron-bearing minerals likely began forming as the grains were transported from their place of erosion to their respective areas of deposition. The same process can be seen today as mineral-rich waters of semi-arid to tropical rivers mineralize large amounts of sediment as it is transported and deposited into adjoining basins. 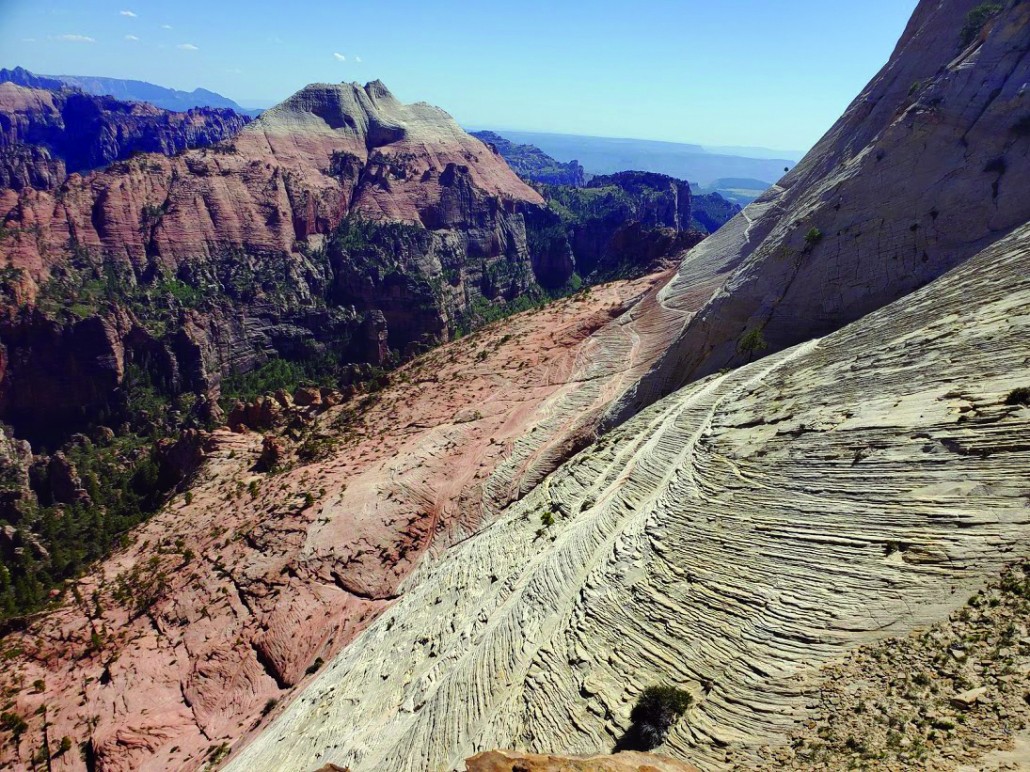 Multicolored sections of the Navajo Sandstone in the Zion National Park area.

After the sediment is buried, moving groundwater can further mineralize and alter the red rock to change it to varying shades of pink, vermilion, maroon, or even white. In southern Utah, the upper parts of the Navajo and Entrada Sandstones often exhibit areas referred to as “bleached zones.” This term refers to areas where reducing groundwaters have partially removed the iron oxide coating from the sand grains. A reducing agent is a solvent that can remove oxygen from a compound. So in the case of the iron pigments that colored the Navajo Sandstone, groundwater that was slightly acidic or contained other reducing agents seems to have dissolved large amounts of iron mineralization from the upper sections, often redepositing the iron in cracks, joints, or different sections of the sandstone that possess irregularities in grain size. Areas that have lost iron oxide become lighter shades of pink and white, whereas areas that gained additional iron oxide from the groundwater movement become darker shades of maroon and even black. In most cases, these color alterations likely happened while the units were deeply buried beneath the surface. However, because these units are so permeable, allowing water to flow easily through them, water has continued migrating, dissolving bits of iron and other minerals even after they have been exposed by erosion. The dissolved minerals often get left behind on canyon walls and surfaces as the water evaporates, contributing to the creation of the well-known “desert varnish” on the rock face. 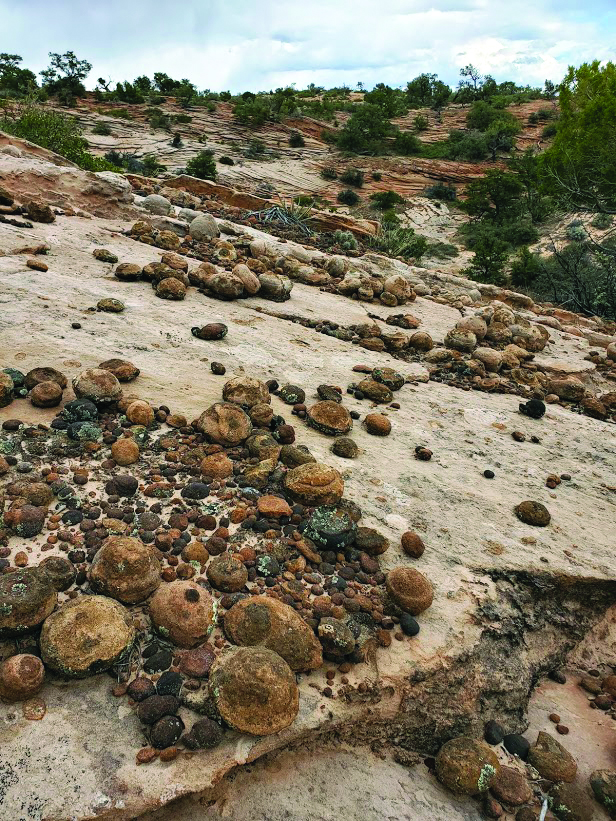 Iron nodules, often called “Moqui marbles,” weathering out of the Navajo Sandstone. The nodules here range from about 1 to 4 inches in diameter.

Another interesting feature of post-depositional iron-oxide movement within southern Utah’s sandstones are Moqui marbles (see “Glad You Asked” article in the September 2017 issue of Survey Notes). Moqui marbles are spherical concretions or nodules of hematite and sandstone that are formed as large amounts of reducing water dissolve hematite and illite minerals from one part of the sandstone and redeposit them around a point of nucleation. It is unclear what creates the nucleation spot for these iron concretions, but once the hematite begins to bind to some type of ionized nucleus, a chemical reaction begins causing more dissolved hematite to precipitate out of solution around existing nodules.

The amount of iron-oxide mineralization that gives Utah’s sandstones their color is typically very small. One in-depth analysis of rock coloration in the Navajo Sandstone found that minuscule differences in iron-oxide mineralization can mean the difference between red, pink, and white sandstone. For instance, red sandstone contained an average of 0.7 percent of iron oxide within the samples, whereas a sample of “bleached” white sandstone contained 0.2 percent. Pink samples seem to have nearly the same amount of iron minerals as the deep red samples; however, the iron in the pink sections of rock is largely stripped from the original grain coatings and redeposited in voids between the sand grains.

Although geologists are confident about the minerals involved in coloring Utah’s red rocks, many questions remain. Some of these involve the extent to which ancient folding, petroleum migration, or even deep geothermal waters might have played a role in the mineralization and coloring of the rocks. Regardless of the answers, all can agree that the colors of the rocks in Utah’s Colorado Plateau region make for some of the most spectacular scenery on Earth.