The UGS Response to the March 18, 2020 Magnitude 5.7 Magna, Utah, Earthquake and Aftershock Sequence

by the UGS Geologic Hazards Program

Early on the morning of March 18, 2020, a magnitude (M) 5.7 earthquake shook the Wasatch Front. The earthquake was centered about 8 miles below Magna, Utah, and about 10 miles west of downtown Salt Lake City. The earthquake was widely felt along the Wasatch Front and into Idaho, Wyoming, and Colorado as shown by the Did You Feel It reports to the U.S. Geological Survey (USGS). Fortunately, there were no deaths from the earthquake; however, multiple injuries were reported as well as damage to buildings and homes. 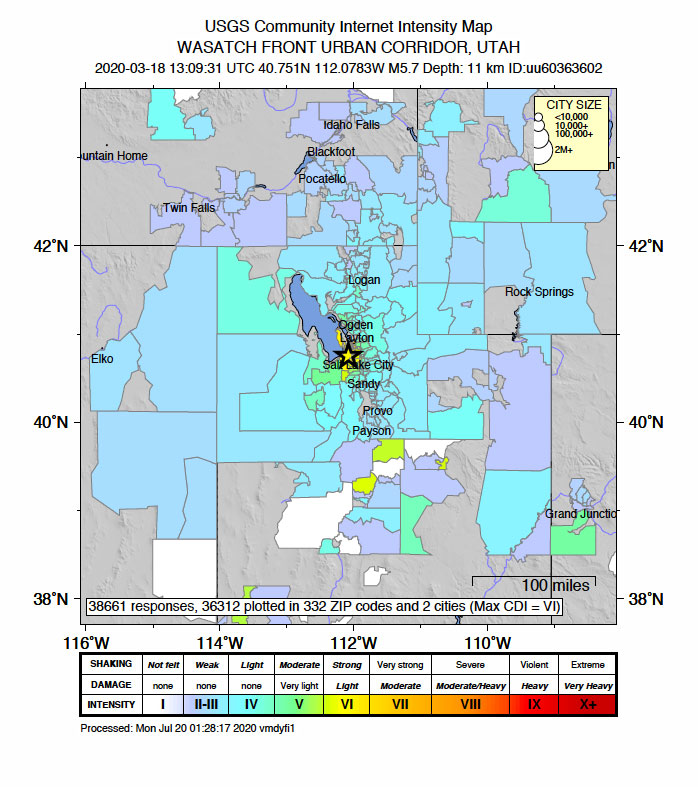 To assist emergency managers and first responders to the earthquake, the Utah Geological Survey (UGS) immediately activated its Emergency Operations Center (EOC), where scientific information collected on the earthquake could be coordinated and managed. Initial response included the deployment of two field-reconnaissance teams to investigate geologic effects from the earthquake and to provide scientific assistance to first responders as needed. The scientific information we collected was shared with the Utah Division of Emergency Management’s (UDEM) State EOC and the University of Utah Seismograph Stations (UUSS). In addition, the UGS worked extensively with the UUSS to determine which fault(s) were involved with the earthquake and subsequent aftershocks.

Within two hours of the earthquake, the UGS established a digital web-based clearinghouse to collect, distribute, and archive important data and other information on the earthquake. The clearinghouse provides timely information to the public and media and provides future researchers with the necessary data to investigate earthquake effects. Clearinghouse data are also critical to the performance evaluation of infrastructure during earthquakes, including the effectiveness of building codes, material types, and construction methods. These evaluations can reduce the impact and effects of future earthquakes.

The majority of submitted items were photographed documenting damage to structures and ground deformation caused by earthquake shaking. Numerous maps and diagrams from scientists were submitted to contextualize the main shock and subsequent aftershocks. Submitted videos documented the varied intensity of shaking experienced in Salt Lake Valley. The contributions, nearly 800 submissions, to the clearinghouse have provided great insight into the impacts of the M 5.7 Magna, Utah, earthquake, and will be a valuable resource for future researchers.

In the hours following the earthquake, the UGS deployed field teams to document geologic effects in areas determined to be susceptible. A M 5.7earthquake is too small for fault movement to rupture the ground and offset the ground surface in the Intermountain West. However, the field teams observed surface cracking, liquefaction, and lateral spread features which were mostly a result of ground shaking.

Liquefaction was the most widely observed geologic effect due to ground shaking from the earthquake. Liquefaction is a phenomenon where sandy, water-saturated soil temporarily loses strength due to strong ground shaking from an earthquake. The ground may behave like a fluid, causing damage to infrastructures like buildings, roads, and pipelines. Liquefaction from the Magna earthquake was observed along the Jordan River and near Great Salt Lake, where groundwater levels are high. The UGS field reconnaissance teams observed several types of liquefaction, including sand boils, ground cracking, and lateral spreading. 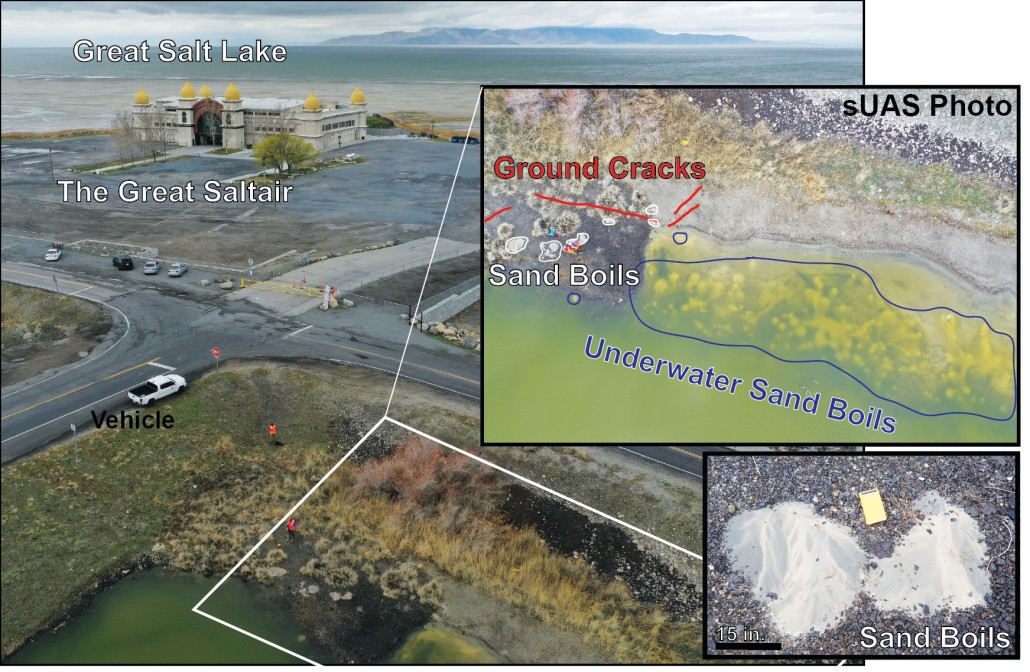 The day after the main shock, UGS field teams were notified by UDOT of possible liquefaction features near the Interstate 80/State Route 202 interchange near Saltair. Upon investigation, our field teams observed sand boils on land and below water, as well as ground cracking within the engineered fill at the interchange. Using a UGS small unmanned aircraft system (sUAS), field teams were able to observe the extent of underwater sand boils, which were much more numerous than those on land. Underwater sand boils were observed in other ponds at the interchange, as well as along the access road to the nearby Great Salt Lake Marina State Park.

Beyond the deformation observed near Saltair, UGS geologists looked for ground shaking-related damage within a several mile radius from the epicenter, including sites along the Jordan River, marshy areas, and the foothills and canyons of the Wasatch Range where rockfall-prone outcrops are known. Two places along the Jordan River had minor lateral spreading that consisted of several-foot-long zones of fresh, transverse cracking of riverbank deposits, and we discovered a relatively recent rockfall at the mouth of Parleys Canyon that upon further inspection likely predates the earthquake. We also documented two rockfalls sourced from a Tertiary-age conglomerate: one just west of Ensign Peak and the other several miles up City Creek Canyon. Both rockfalls had fresh exposures on the source outcrops, impact craters, furrows, and downed and broken scrub oak through the runout zones and rock debris and boulders from the detached blocks as they broke apart while traveling downslope. Overall, however, we observed no major or widespread ground shaking-related features that could be directly attributed to the earthquake.

Which Fault Caused the Main Earthquake? 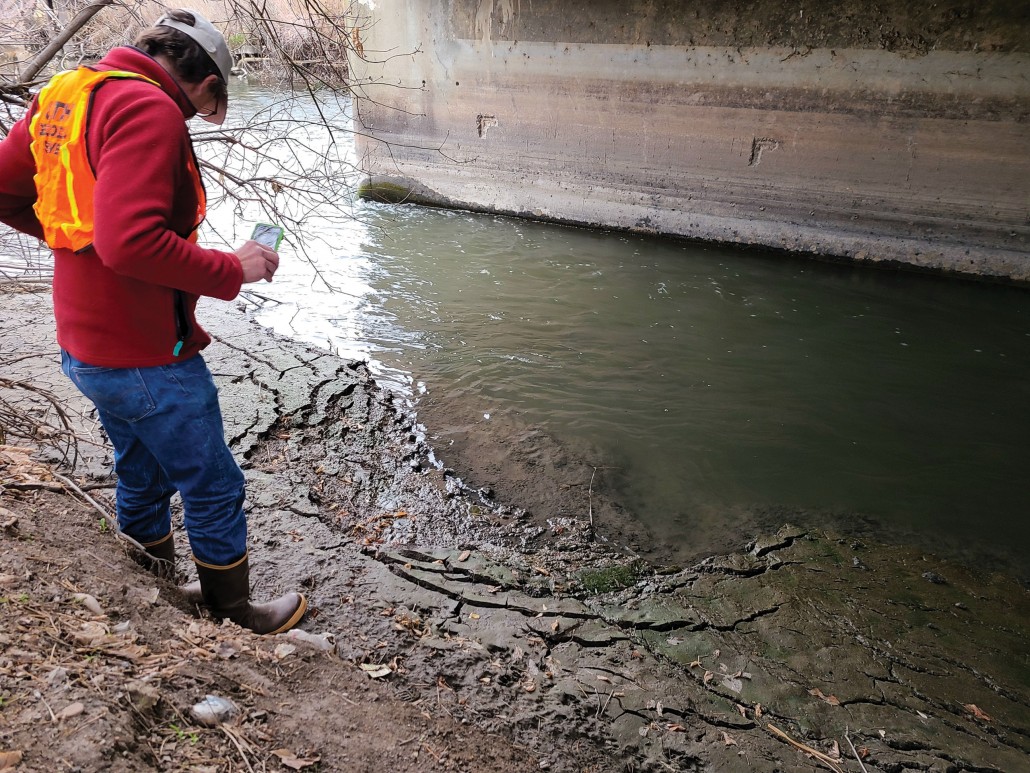 Immediately following the Magna earthquake, the UGS and the UUSS began working to identify and understand the fault or faults that moved and caused the earthquake and subsequent aftershocks. Since the earthquake-producing fault(s) did not rupture the ground surface, the UGS analyzed available geologic mapping and gravity data, comparing it with available seismicity data from the UUSS, to identify suspected faults.

Based on preliminary data available for the Magna main shock and larger aftershocks, the UGS identified several possible source faults. One area of interest is called the Saltair graben—an inferred basin fault structure—which may be influencing some of the Magna aftershock locations. However, this area was probably not responsible for the main shock. After receiving and analyzing more data, it seems likely that the main shock resulted from the movement of a previously unidentified fault potentially related to the Wasatch fault zone deep in the subsurface.

Thousands of aftershocks followed the main earthquake. As of July 9, 2020, the UUSS had recorded 2,343 aftershocks. Most of the aftershocks occurred in two main areas: (1) a western grouping near the mainshock location and (2) an eastern grouping near the West Valley fault zone. Many of the western grouping of aftershocks occurred along a west-dipping trend that highlights a hypothetical west-dipping fault. Both areas of aftershocks have geologists and seismologists asking many questions about what the structure of the Salt Lake Valley subsurface geology looks like and how the faults connect miles down below the surface. These and many other questions will be studied by geologists and seismologists for some time. 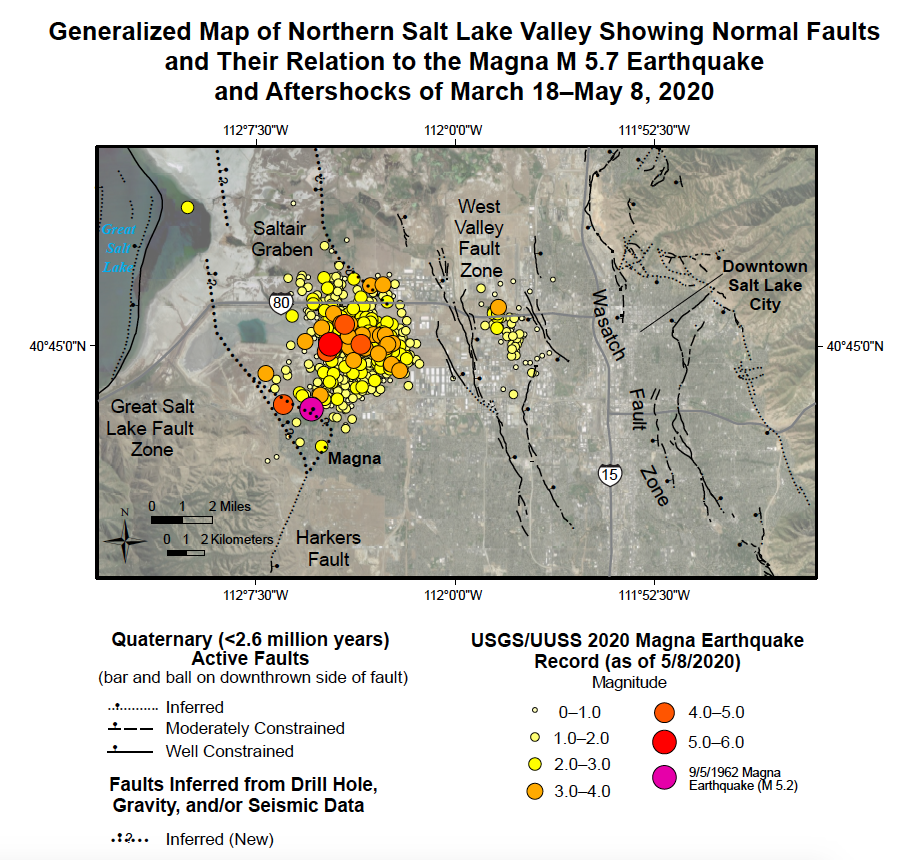 Map showing Magna earthquakes and aftershocks with mapped Quaternary (<2.6 million years) faults and the Saltair graben, a potentially related inferred basin fault structure. Current research suggests that the main shock resulted from the movement of a fault potentially related to the Wasatch fault zone at depth. Numerous aftershocks appear to be related to the West Valley fault zone as well. 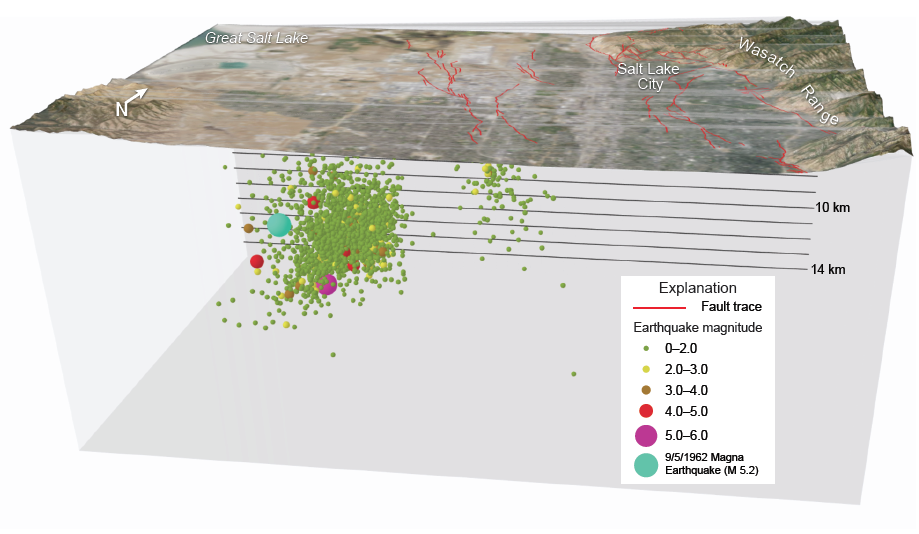 Image from a three-dimensional web scene showing the location of the Magna earthquake and aftershocks below the Salt Lake Valley floor.

On the day of the earthquake, the UGS created an interactive three-dimensional (3D) web scene using a geographic information system (GIS) data set that represented the main shock and subsequent aftershocks. The web scene models the earthquake locations in three-dimensional space using ArcScene GIS software with data provided by the UUSS. The initial scene was created using the GIS earthquake locations, imagery, hazardous (Quaternary) fault lines, and a digital elevation model. It was then converted into a web scene and used to create an interactive ArcGIS Online web application. The last update was on July 9, 2020, that displayed over 2,300 locations. As additional aftershocks are detected, the 3D web scene will be periodically updated.

Although no deaths occurred and the damage was moderate, the recent Magna earthquake is a reminder that Utah is seismically active and that damaging earthquakes do occur. Even with the recent stress relief of the Magna earthquake, enough seismic energy has built up along the Wasatch fault zone that an earthquake up to about M 7.6 could occur at any time, most likely in the Salt Lake Valley or Brigham City areas. You can prepare for future earthquakes by following the recommendations of the UGS and the Utah Seismic Safety Commission that are outlined in the Putting Down Roots in Earthquake Country Handbook available online or a printed copy may be obtained from the Natural Resources Map & Bookstore.

The mission of the Geologic Hazards Program is to: 1) respond to geologic hazard emergencies and provide unbiased, scientific advice to local governments and incident commanders, 2) investigate and map geologic hazards in urban and other areas (to publish and distribute maps and GIS spatial data), and 3) provide geologic hazard-related technical and educational outreach and information to inform Utahns about hazards. The focus of the Program is to reduce Utah’s life-safety, property, and economic risk from geologic hazards.