Nestled in south-central Utah is a remote mountain range which epitomizes an entire era of unique volcanism in Utah and was one of the last mountain ranges in the United States to be fully explored and mapped. In fact, these intrusive volcanic mountains were the last mountain range in the United States to be named. It wasn’t until 1872 that the range was named and still three years later when the mountains were finally explored by the great American geologist G.K. Gilbert who first wrote about the incredibly unique geology of the Henry Mountains.

Utah’s Henry Mountains are in Garfield and Wayne Counties east of the Waterpocket Fold between Capitol Reef National Park and Glen Canyon National Recreation Area. They are composed of about a half dozen high peaks, three of which make the list of Utah’s top thirty highest. Mount Ellen at 11,522 feet above sea level is the 13th highest peak in the state. But what makes the Henry Mountains so interesting is not so much their height but their geology. Most of Utah’s mountain ranges were formed from large faulted or folded blocks of sedimentary rock. The Henry Mountains, however, are one of only a few volcanic mountains in Utah that were formed by large magma chambers injected between layers of sedimentary host rock. Geologists characterize these volcanic structures that make up the Henry Mountains as “laccoliths.”

When a laccolith is pushed even closer to the surface by subsequent pressure after it cools, steep faults can form around its periphery. Geologists refer to the resulting feature with the even more specific term of “bysmalith.” Table Mountain on the northwest corner of the Henry Mountains is a great example of a bysmalith feature. 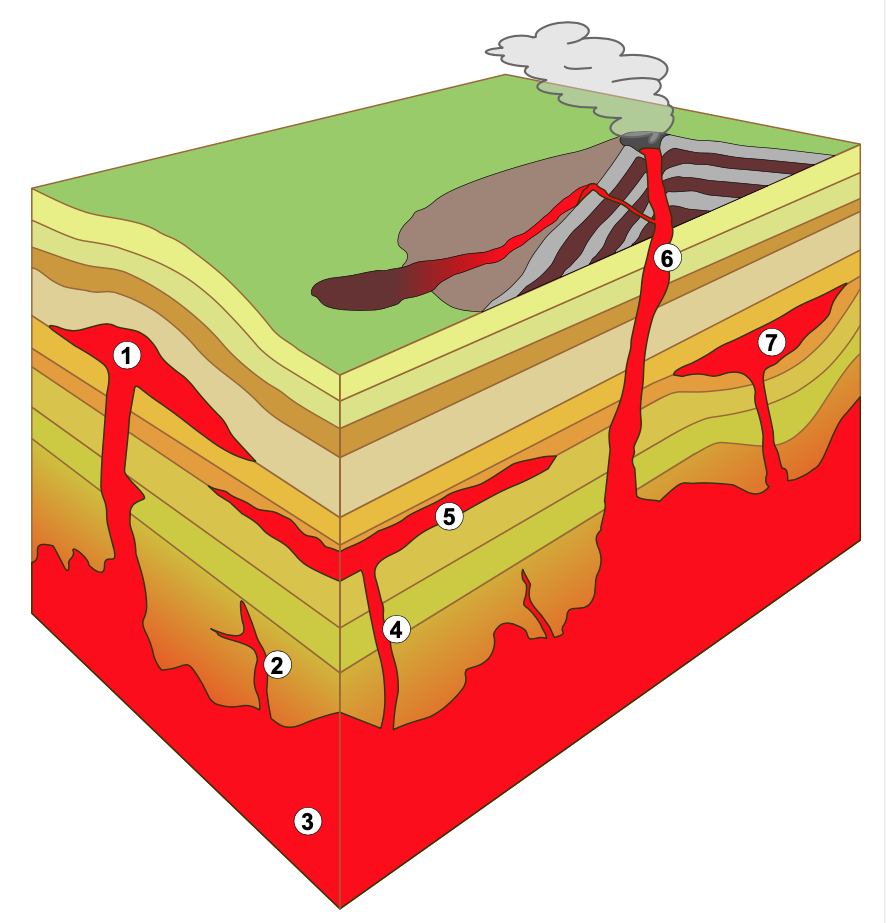 Basic types of igneous intrusions: 1. Laccolith 2. Small dike 3. Batholith
4. Dike 5. Sill 6. Volcanic neck, or pipe 7. Lopolith
Note: As a general rule, in contrast to the smoldering volcanic vent in the figure, these names refer to the fully cooled and usually millions-of-years-old rock formations, which are the result of the underground magmatic activity shown. (mediawiki, GNU Free Documentation License)

Unlike a typical volcano, which forcefully ejects the contents of a magma chamber onto the surface of the earth, or a batholith, which is a very large magma chamber that cools beneath the surface, a laccolith is a sizable magma body which attempts to come to the surface through a neck or conduit but spreads horizontally between sedimentary layers on its way up, pushing the host rock layers up into a dome shape before cooling beneath the surface. As a result, the “textbook” laccolith can look a little bit like an impact crater as the surrounding dome-shaped, upwarped eroding layers of sedimentary rock often form concentric circles around the underlying magma chamber in a way that resembles the central dome of a meteor impact.

The Henry Mountains formed between 23 and 29 million years ago during the Oligocene epoch when portions of subducted oceanic crust melted beneath Utah to form huge viscous masses of rising magma. During the period of about 20 to 30 million years ago, many large igneous bodies were emplaced in Utah and the surrounding region. These include the nearby laccoliths and stocks (similar to batholiths but smaller) of the Abajo and La Sal Mountains, as well as Navajo Mountain and the Pine Valley Mountains in Utah, and the La Plata Mountains in Colorado.  Other large igneous intrusions were also emplaced during this time in the Wasatch Range, Oquirrh Mountains, and Pilot Range.

Most of these enormous magma bodies made their way to, or near the surface within about a 10-million-year window of time during the Oligocene and Miocene epochs.

Geologists come from all over the world to study the unique properties of Utah’s laccoliths. For instance, the Pine Valley Mountains laccolith in southwestern Utah is thought to be one of the largest in the world (see Survey Notes, v. 34 no. 3). Its northern flanks are bordered by massive landslides which occurred when the laccolithic magma was rapidly injected into the subsurface, sufficiently steepening the ground surface and causing the overlying layers to slide off in a rapid mass-wasting event. The speed of emplacement of laccoliths like the Henry and Pine Valley Mountains is unknown, but features such as the North Pine Valley landslides suggest that laccoliths can form quite rapidly. 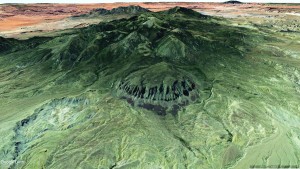 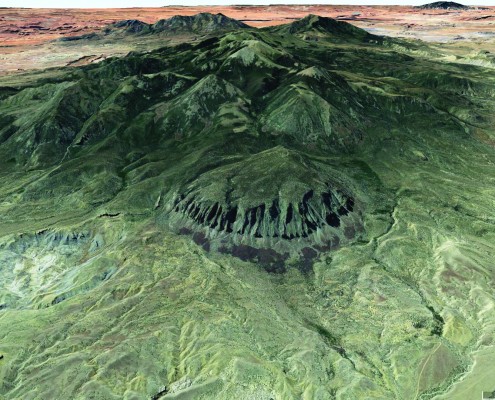 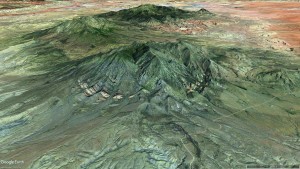 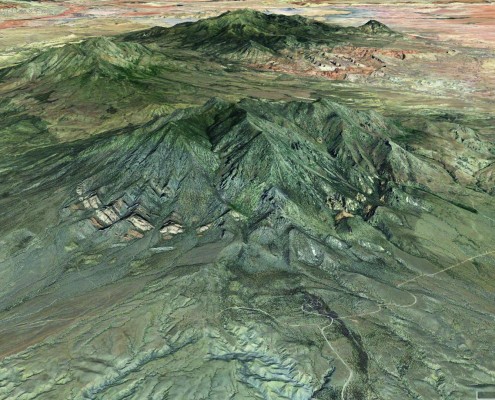 The Henry Mountains are also notable for the free-roaming herd of bison that live there, one of only three such herds in the country. The population was established in 1941 after relocation of 18 individuals from Yellowstone National Park. The herd is often grazing in the saddles between the central peaks of the range. The mountains are also home to antelope, mule deer, bighorn sheep, wild burros, and mountain lions. As one of the most isolated high mountain ranges in the United States, the unique geology of the Henry Mountains makes them worth the effort to explore and enjoy. 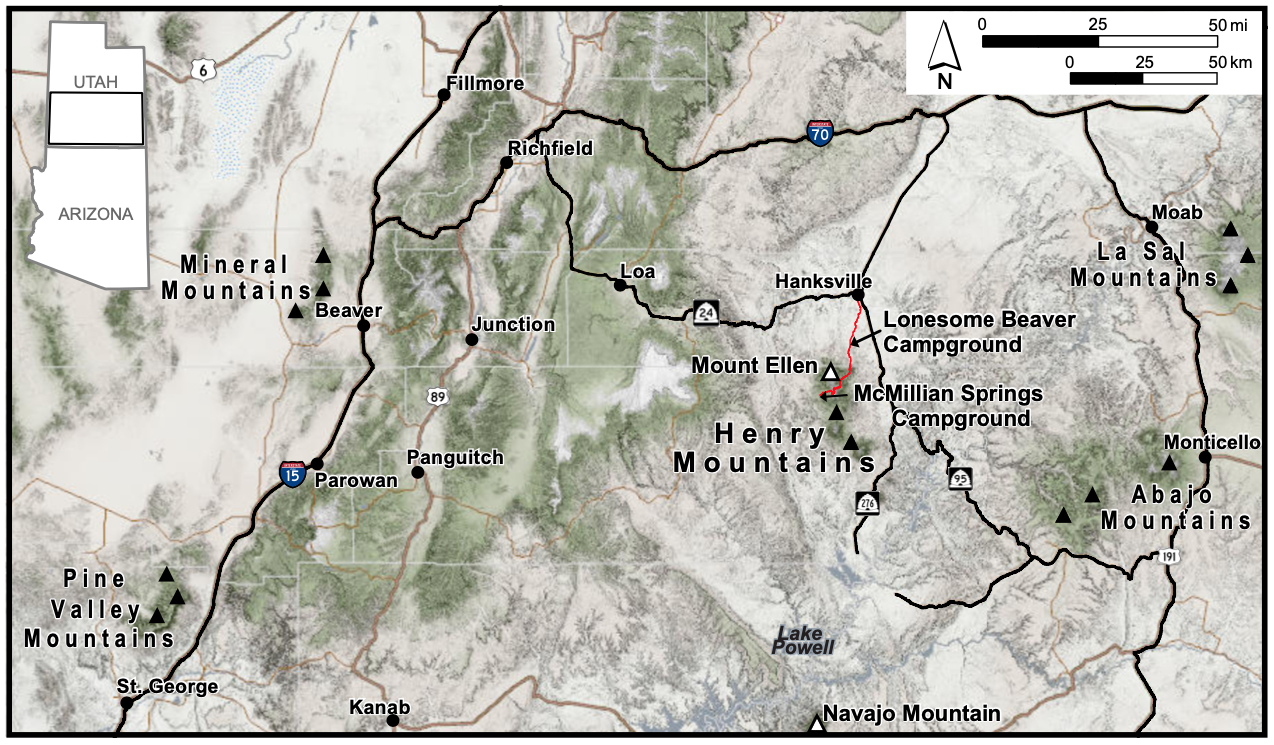 How to Get to the Henry Mountains:

The Henry Mountains are best accessed from the east by paved Utah State Routes 95 and 276 or from the north by Utah State Route 24. One of the best dirt access roads is accessed by traveling south on 100 East Street in Hanksville. This street becomes Sawmill Road and winds south for approximately 23 miles before reaching the Lonesome Beaver Campground. The road then gets considerably steeper and rougher as it climbs south and then west to the McMillan Springs Campground on the west slopes of Mount Ellen.