Energy News: Geothermal in Utah and the USA:
Is a Sleeping Energy Giant Awakening?

Geothermal heat has immense potential to provide clean, sustainable energy to Utah and the rest of the country. Western Utah is one of the more prospective areas for development of geothermal resources due to its unique geology and often anomalous subsurface heat flow. Geothermal energy resources are not as well known as other utility-scale renewables such as photovoltaic solar or wind, but they have been in use longer and are finally getting back into the public spotlight after a decade-long hiatus since the last geothermal boom. Renewed interest is due to the rising awareness of the magnitude of geothermal potential, the push for energy security and stability, and the desire for carbon-free sustainable base-load electricity. The U.S. Department of Energy (DOE) Geothermal Technologies Office (GTO) GeoVision analysis report, published in 2019, provided a comprehensive guide to evaluating future geothermal deployment opportunities. The GeoVision report supports a 26-fold increase in geothermal power generation by 2050, to be achieved through technology improvements and reduced costs.

Blundell Geothermal Power Plant situated on an alluvial fan of the Mineral Mountains near Milford, Utah. 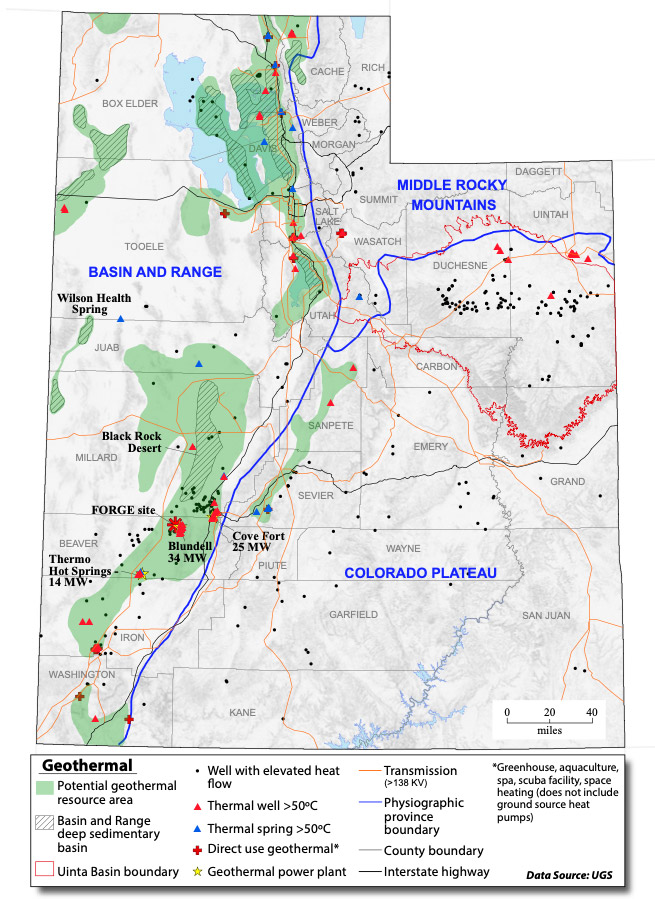 Geothermal resource map of Utah indicating active resources in use and areas of significant resource potential.

Renewed interest in geothermal research and development over the past 10 years has contributed to several technological advancements, particularly those in a synergistic relationship with the petroleum exploration industry. These advancements include improved exploration methods, downhole tools, drilling methods, and drilling equipment. Most of the UGS geothermal research has been funded by the U.S. DOE GTO (www.energy.gov/eere/geothermal) and these projects vary in scale from basin to regional extent. Most current UGS research focuses on non-conventional geothermal resources such as deep sedimentary basins and enhanced geothermal systems (EGS). The UGS is also exploring the possibility of “co-produced fluids,” which is the extraction of energy from lower-temperature water associated with oil and gas wells.

Deep sedimentary basins are prevalent in the Basin and Range physiographic province of western Utah and the best-studied example within Utah is the Black Rock Desert. In this setting, thick basin-fill sediments act as a thermal insulator on top of bedrock resulting in elevated temperatures at 2 to 3 kilometers (6,500 to 9,800 feet) in depth inside of sedimentary rock aquifers. Sandia National Laboratory, together with the UGS, is currently working on a GTO subsurface imaging research project in Steptoe Valley, Nevada, building upon previous UGS work in the area using novel approaches with geophysical methods. The results of this research will be used as a direct analog to the geothermal potential of Utah’s Black Rock Desert.

EGS resources are typically known as “hot dry rock” and occur where high temperatures are present in subsurface rocks of relatively low permeability. EGS is the focus of the Frontier Observatory for Research in Geothermal Energy (FORGE) site near Milford, Utah—a DOE initiative, headed by the Energy and Geoscience Institute at the University of Utah, to locate and create a dedicated research laboratory where scientists and engineers can develop and test EGS technologies and techniques. The Utah FORGE project, now in its sixth year, focuses on an EGS target of tight crystalline rock that is between 175 and 225 degrees Celsius (347 to 437 degrees Fahrenheit) at 1.5 to 4 kilometers (5,000 to 13,000 feet) in depth. The goal of this project is to test and develop novel techniques to stimulate the reservoir rock, via hydraulic fracturing techniques developed by the petroleum industry, and create permeable pathways that can allow for extraction of heat energy in these rocks. The heat energy will be extracted from the hot reservoir rock by pumping natural, briny subsurface waters in a closed loop system that reinjects the slightly cooled brines after running through a power plant generator. 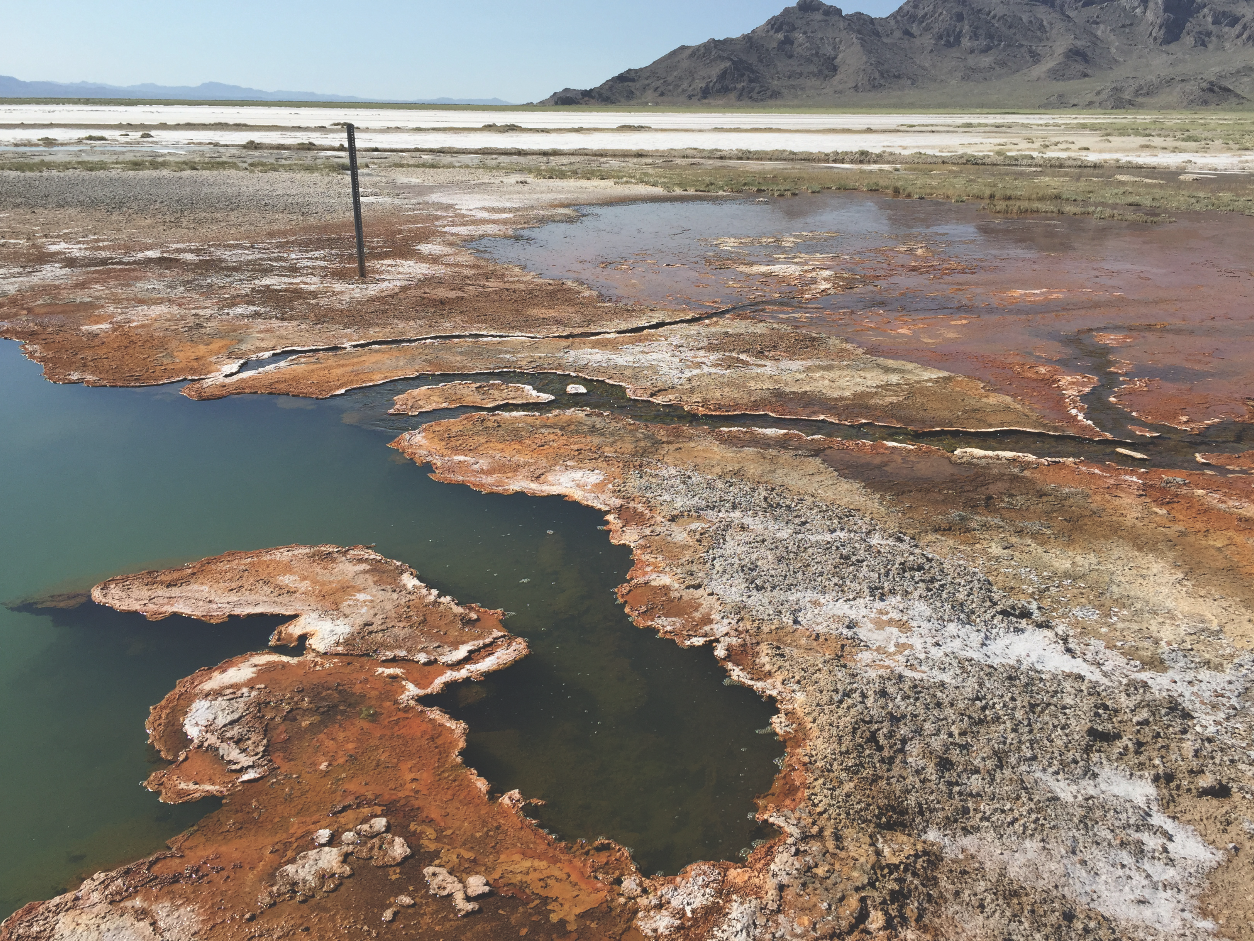 Geothermal resources derived from co-produced fluids can be found in the Uinta Basin of Utah and provide a unique opportunity to repurpose oil and gas field infrastructure and wells. A previous UGS study concluded that numerous wells in the Uinta Basin are deeper than 2 kilometers (6,500 feet) and reach temperatures more than 50 degrees Celsius (122 degrees Fahrenheit), ideal for direct-use applications. Out of a well-distributed sampling of 776 sites studied, 36 of the wells recorded temperatures greater than 140 degrees Celsius (284 degrees Fahrenheit) and could be suitable for small-scale binary power production. Preliminary thermal models of the Uinta Basin support existing interpretations that the thermal regime characteristics are more predictable and likely are uniformly spread across the basin, resulting in a larger geothermal prospect.

The UGS is also involved in the GTO-funded “Innovative Geothermal Exploration through Novel Investigations of Undiscovered Systems” (INGENIOUS) project led by the University of Nevada, Reno. The primary goal of this project is to accelerate discoveries of new, commercially viable, hidden geothermal systems while significantly reducing the exploration and development risks for all geothermal resources. This project will integrate both regional-scale reconnaissance and local-scale reservoir characterization based on numerous datasets that include Quaternary-age faults, various measures of heat and heat flow, and a range of geophysical datasets. INGENIOUS is a 4.5-year project with a budget of $10 million that anticipates drilling several test wells in Utah and Nevada to prove the existence of these resources.

Geothermal power generation and direct-use development offers significant potential to a variety of rural Utah areas, and the UGS is involved in several research initiatives that could help unlock this potential. In addition, this carbon-free, clean energy source will only increase in importance as the country moves toward more sustainable energy resources. More information about geothermal in Utah can be found at geology.utah.gov/resources/energy/geothermal.