GeoSights: Pine Park and the Ancient Supervolcanoes of Southwestern Utah

Hidden in a remote corner of Washington County is a fascinating place nearly forgotten among the other attractions of southern Utah. The scenic Pine Park area exposes intriguing volcanic deposits that reveal the story of the largest volcanic eruptions in Utah’s geologic history. Although the beautiful exposures outcrop in only a small area, the eruptions that produced the volcanic deposits in this part of Utah were some of the largest in Earth’s history. 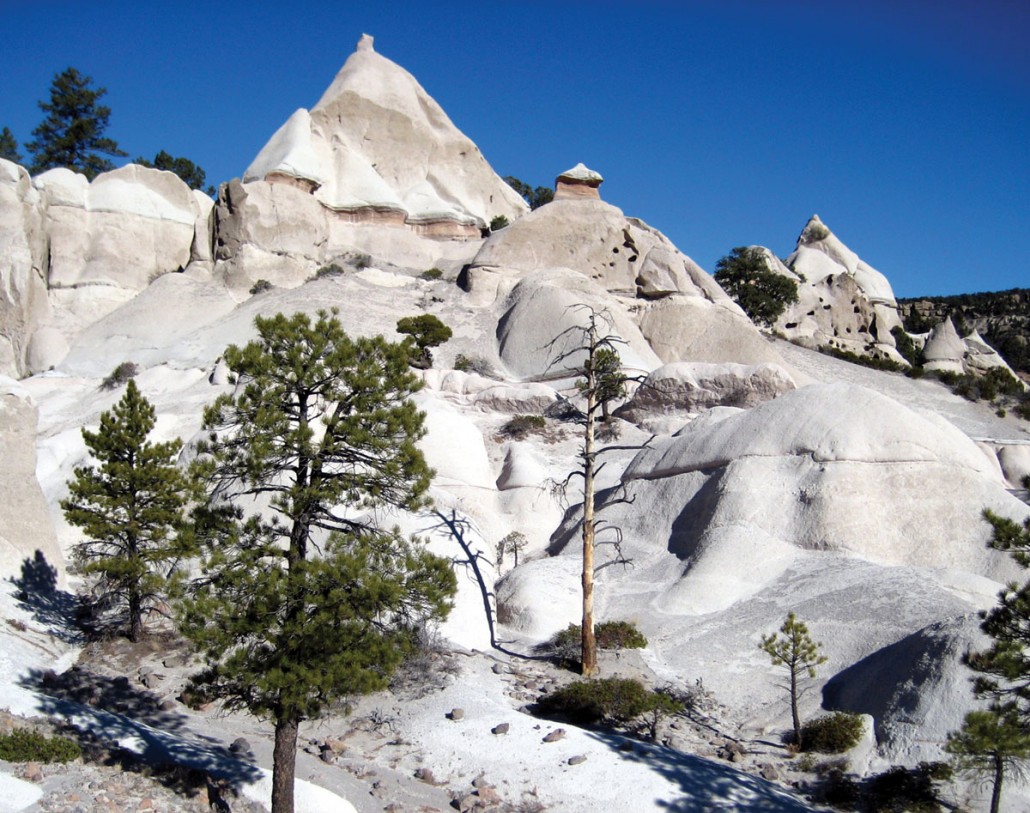 Exposures of the Tuff of Honeycomb Rock at Pine Park.

Pine Park is located approximately 20 miles (32km) southwest of Enterprise in the southwest corner of Utah. It is one of several attractions located on the upper Beaver Dam Wash. The region supports a high desert forest of juniper, pinyon, and large ponderosa pine trees, which thrive in the well-drained volcanic soils. The main attractions in Pine Park are bright white volcanic ash-flow tuff exposures that form a landscape of hoodoos, pyramid- and mushroom-shaped domes, and undulating slickrock basins. Many of these vistas resemble the hoodoos and knobs of the better-known Goblin Valley State Park of central Utah, or the Toadstools area near Lake Powell’s Wahweap Bay. However, instead of the familiar sandstone and claystone of Utah’s Colorado Plateau, these spires have eroded from thick deposits of white volcanic ash-flow tuff known as the Tuff of Honeycomb Rock. An ash-flow tuff is a type of rock made of volcanic ash, rock, and gases derived from explosive volcanic eruptions.

A few miles to the west down Pine Park Canyon, at Beaver Dam State Park in Nevada, the same types of ashflow tuff deposits create scenic vistas like those of Pine Park. These two attractions showcase just a small piece of the voluminous ash-flow tuff deposits that blanket the region. Called “supervolcanoes” or “super-eruptions” because of their immense size, these types of eruptions tend to leave behind massive, often miles-wide, craters called calderas instead of the typical pyramid-shaped cones of stratovolcanoes. A caldera’s large, cauldron-like hollow or valley forms after magma erupts and the ground surface above the magma chamber collapses. 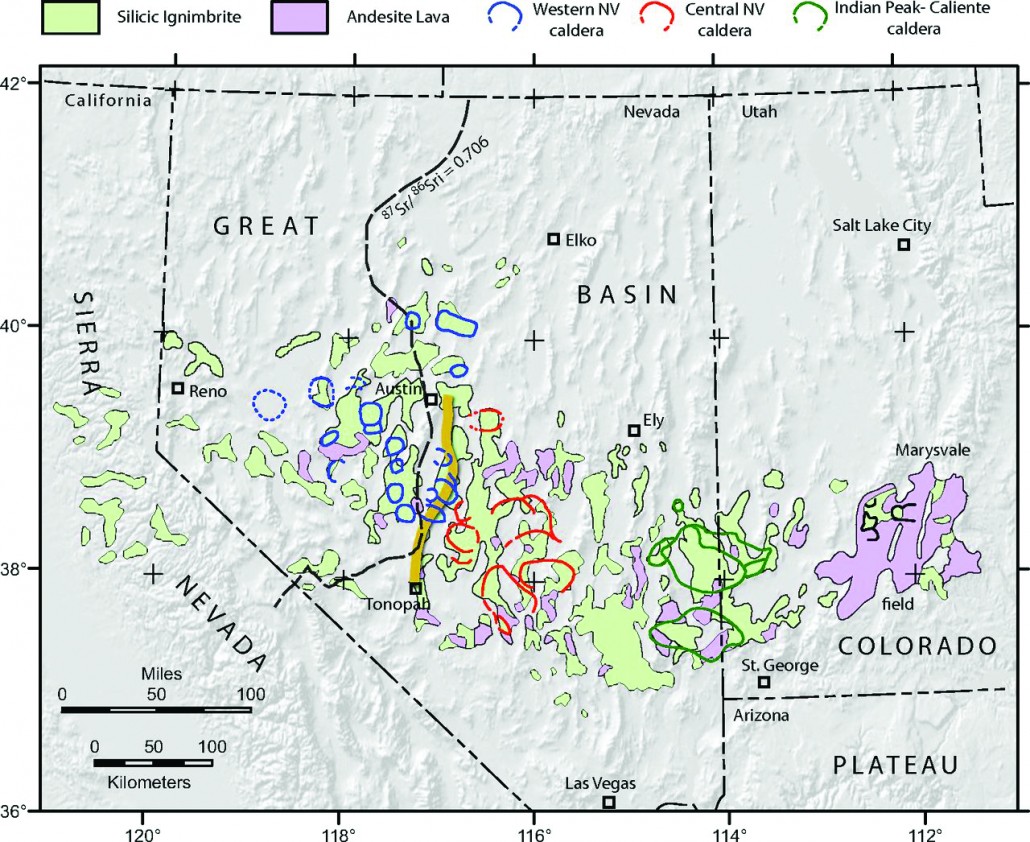 Miocene- to Oligocene-age (12 to 36 million years ago) supervolcanoes, caldera complexes, and volcanic deposits, which stretch from south-central and western Utah through Nevada and eastern California. From Best and others, 2013, Geosphere article: https://doi.org/10.1130/GES00945.1

Pine Park lies at the edge of the ancient Pine Park caldera—one of dozens of calderas spanning from southwestern Utah, across central Nevada, to the border of eastern California. These supervolcanoes were active between 12 and 36 million years ago, when Utah was home to rhinoceros, camels, tortoises, and palm trees. Although the Tuff of Honeycomb Rock that outcrops at Pine Park is locally derived from a smaller ancient caldera, many of the ash-flow tuffs in the area are derived from the nearby Indian Peak–Caliente caldera complex, formed by some of the largest ancient super-eruptions in North America. Geologists have found deposits 2.5 miles (4 km) thick that are believed to have come from a single incredible eruption from the Indian Peak–Caliente caldera complex 30 million years ago. Over 1,300 cubic miles (5,400 km3) of volcanic materials have been found from this eruption spanning from central Utah to central Nevada and from Fillmore, Utah, on the north to Cedar City, Utah, on the south—over 1,000 times the volume of material ejected during the 1980 Mount St. Helens eruption (about 1 cubic mile [4 km3]). And this caldera was only one of up to 20 calderas in the region.

Since the eruption of the volcanoes that created the deposits of Pine Park, extension of the Earth’s crust across the Basin and Range Province has torn apart much of western Utah and has vastly altered the landscape and drainages. Without geologists studying the thick volcanic deposits such as those exposed at Pine Park, people may have never known the extent to which ancient volcanoes altered the landscape of this part of southern Utah. 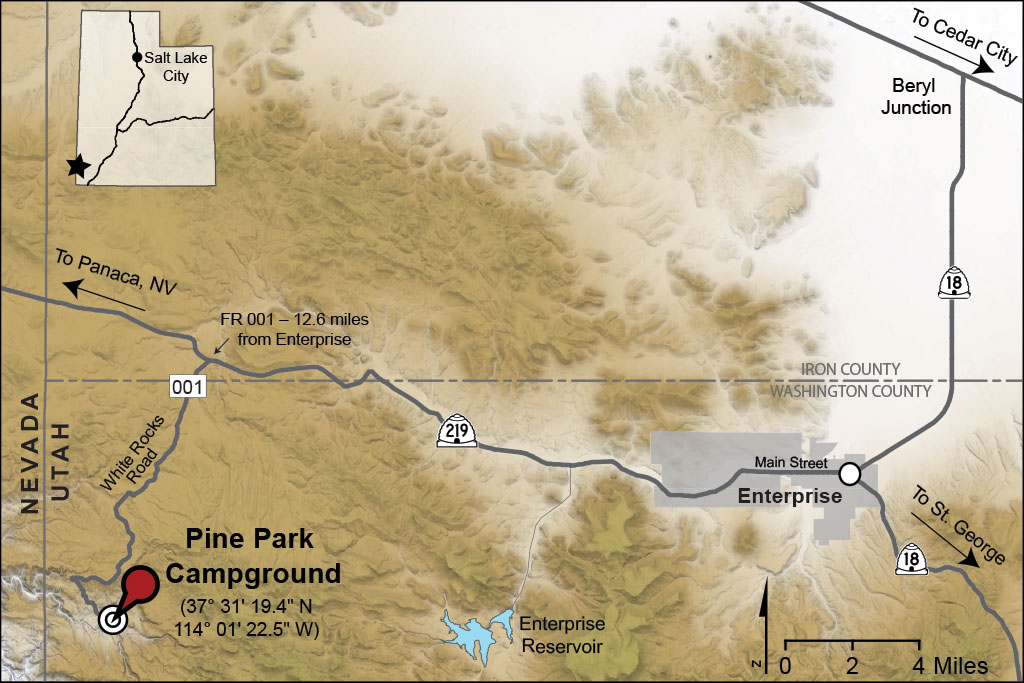 To get to Pine Park, head west on Main Street from the town of Enterprise, Utah, toward Panaca on State Route 219. Continue past the signs pointing to Enterprise Reservoir. After a few miles the paved road will transition to a nicely graded dirt road. After driving 12.6 miles from Enterprise, take a left on Forest Service Road 001 (White Rocks Road) and continue west-southwest 9.5 miles. Along the last mile, the road becomes rougher and turns sharply to the southeast and snakes its way down into the valley. The road ends at a creek and primitive campsite. There are no bathroom or potable water facilities.