The opportunity for Carbon Capture Utilization and Sequestration (CCUS)—sometimes abbreviated to CCS—depends considerably on the type of rock present in the subsurface. (A) CO2 storage can occur by injecting gas deep underground into rock strata deemed unsuitable for other purposes. Modified from imagery provided by Global CCS Institute (https://www.globalccsinstitute.com/resources/ccs-image-library/). (B) A 4-inch-wide slabbed rock core from the Covenant oil field, Sevier County, Utah. The sandstone (buff-colored) is a good reservoir rock due to its porous and often permeable grains. The mudstone (red) is a good geological seal because it has low permeability and prohibits fluid and gas from escaping upwards. The sharp color contrast indicates the boundary between the seal and reservoir rock. The five holes in the rock core are where plugs were drilled into the rock and removed for analysis. (C) and (D) are photomicrographs of Jurassic-age Navajo Sandstone (reservoir rock) from the Covenant oil field that illustrate pore space availability (blue areas) for CO2 storage between quartz grains (white areas). Images B, C, and D modified from Chidsey and others (2020) (https://doi.org/10.34191/ss-167). Note the significant difference in scale from the well (kilometers) to the core (meters) to the rock grain and pore space (millimeters).

The Drum Mountains meteorite at the Smithsonian. Flat surface at top is where the meteorite was cut for sectioning. https://commons.wikimedia.org/wiki/File:Drum_Mountains_meteorite_in_Museum_of_Natural_History.jpg

Large ice column in the entrance room of BBCC. February 2022.

Utah is a fortunate state with ample opportunities to develop high-tech renewable energy. In the past decade, Utah has put itself on national and global green energy maps with rapid development of utility-scale solar farms (together contributing over 1,500 megawatts to the electric grid), three large windfarms (totaling 387 megawatts), the FORGE (Frontier Observatory for Research in Geothermal Energy) research station, and the novel Advanced Clean Energy Storage project which aims to use hydrogen to aid storage of renewable energy in subsurface salt domes. Remarkably, Utah may have another previously overlooked contribution to the green energy transition: coal! Yes, coal, the carbon-rich resource that most individuals emphatically consider not green. However, a new U.S. Department of Energy (DOE)-funded project, “Carbon Ore, Rare Earth and Critical Minerals” (CORE-CM), aims to demonstrate whether western U.S. coal and coal waste streams might have alternative
uses that can support the development of carbon-neutral infrastructure and other high-technology industries. The study is led by the University of Utah, Department of Mining Engineering, and has 25 partnering institutions including the Utah Geological Survey.

Coal and coal-adjacent strata can be enriched in rare earth and other elements important to the development of high-tech products. Rare earth elements, or REEs, consist of the 15 lanthanide series elements as well as yttrium and scandium which exhibit similar geochemical properties. These elements are important components of cameras, LED lights, electronic displays (e.g., smart phones, televisions, and computer monitors), medical devices (e.g., MRIs and X-rays), and notably, magnets and batteries integral to the establishment of carbon-neutral infrastructure. Praseodymium (Pr), for example, is a common component of batteries used in electric bikes and automobiles. Neodymium (Nd) and dysprosium (Dy) are used in permanent magnets for industrial-scale wind turbines and electric vehicle motors.

The global demand and production of rare earth oxides (that can be refined into rare earth metal) has increased markedly over the past few years. From 2016 to 2021, rare earth oxide production more than doubled from 129,000 to 280,000 metric tons. Projections for the next decade indicate an additional fivefold increase in demand for REEs specific to the manufacturing of carbon-neutral technology (Nd, Dy, Pr, and Tb). The projected need and lack of domestic production has led the U.S. Geological Survey to classify REEs as “Critical Minerals” (defined as mineral commodities integral to our economic and national security, whose supply chains rely on foreign markets). Clearly, production of REEs will need to substantially increase to meet societal needs. 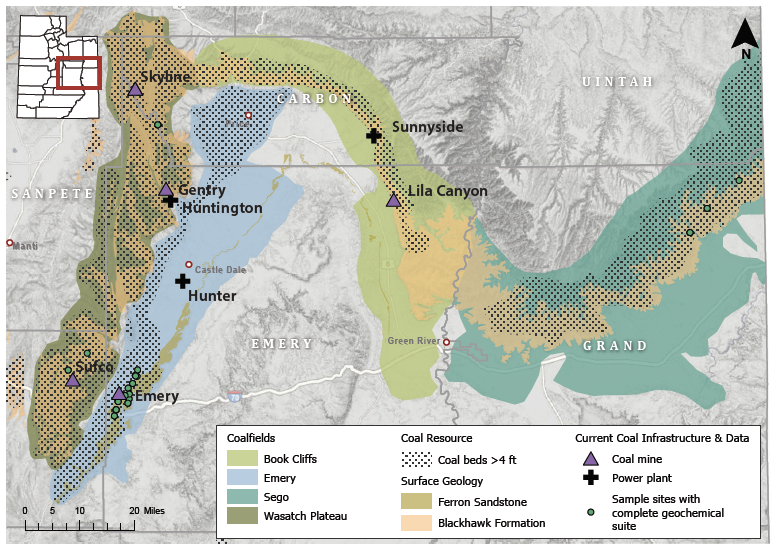 Utah coalfields and active coal infrastructure. Sample points represent data compiled by the U.S. Geological Survey CoalQual database and highlight the limited historical dataset of thorough geochemical sampling. CORE-CM will increase sampling across the region to add to this dataset and improve understanding of how critical minerals vary across coalfields. 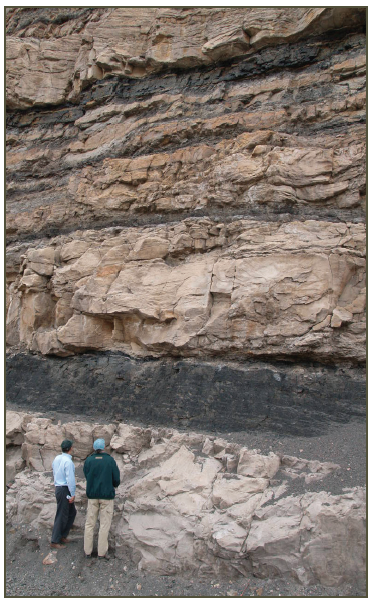 The Utah and Colorado geological surveys are assisting the CORE-CM project via a detailed characterization of REEs and other critical minerals in coalfields of the Wasatch Plateau and Book Cliffs. These current and historical coal mining regions contain thick Cretaceous-age coal beds representing 85- to 75-million-year-old marshland deposits within the Blackhawk Formation and the Emery and Ferron Sandstone Members of the Mancos Shale. This regional characterization aims to define the elemental composition and variation of coal and adjacent rocks using samples collected from mines and drill cores. Partnering institutions will also assist in the geochemical characterization of select coal waste streams such as coal wash plant material (rock “washed” out of the run-of-mine coal production stream) and coal ash waste collected from power plants. Additional engineering teams are researching methods that can develop carbon fibers, graphene, and important polymers from coal’s carbon. Thus, the comprehensive study aims to showcase how the entire commodity and associated waste streams can be used to produce multiple end products that each contribute to technological and economic success.

REEs are a particular high-value commodity because mineable rocks enriched in economic concentrations of REEs are exceptionally rare. Most REEs are currently mined from uncommon igneous deposits (carbonatites and alkaline rocks) and to a lesser degree, placer deposits (sedimentary deposits sourced from weathering of an REE-enriched rock). Though coal itself typically contains low REE concentrations, some coal contains interlaminated claystone and/or volcanic tuffs that are considerably REE enriched. Waste product from coal-fired power plants is another potential REE source, because burning coal removes carbon and concentrates heavier elements in the leftover ash. These potential sources of REEs, combined with an established coal supply chain, makes coal a contender to contribute to the growing REE market.

Geoscientists still have much to accomplish in the effort to characterize REEs and other critical minerals, although researching and identifying prospective resources is necessary to accommodate growing societal need. Utah is not alone in its study of coal as a potential contributor to new industries. More than a dozen other similar DOE-funded studies are assessing other coal resources across the nation while also developing novel coal product processing methods. Who would have thought that coal could be part of 21st century research as a potential contributor to new high-tech industries?