Hazards resulting from specific soil and/or rock properties, such as collapsible soil, expansive soil and rock, land subsidence and earth fissures, and radon gas are just a few of the effects of problem soil and rock. These hazards have caused extensive damage to buildings, utilities, and other infrastructure in Utah, resulting in high maintenance and replacement costs when not properly mitigated. 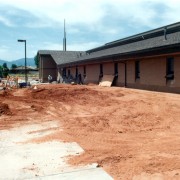 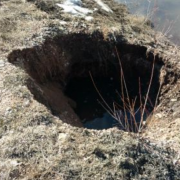 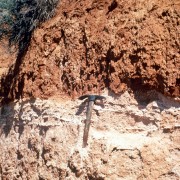 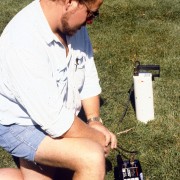 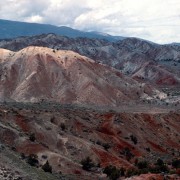 Caliche is a calcareous material that can accumulate in the shallow subsurface of soils in arid and semiarid climates that can be very difficult to excavate.

Soils that have considerable strength when in a dry, natural state, but significantly settle due to hydrocompaction (reduction of air space within the soil) when wetted. Typically, associated with young alluvial fans, debris flows, and loess.

Soil and/or rock that is corrosive to exposed metals and/or concrete.

Soil and/or rock with high clay content that swells when wet and shrinks when dried.

Formed from the dissolution of limestone, dolomite, and gypsum rocks that can create features like caves, sinkholes, and breccia pipes (rubble-filled vertical tubes that form and project to the surface as overlying rock collapse into buried karst caverns).

Sinking of the ground surface caused by groundwater depletion and/or underground mine subsidence or collapse. Subsidence often causes earth fissures which are permanent, linear tension cracks in the ground that extend upward from the groundwater table.

Subsurface erosion of soil or rock by groundwater flow that forms narrow voids. Piping can remove support of overlying soil and rock, resulting in collapse.

Radon is an odorless, tasteless, and clear radioactive gas resulting from the natural decay of uranium that is found in nearly all rock and soil, and when concentrated, such as in buildings or other confined spaces, can lead to lung cancer. It is Utah’s leading geologic hazard in terms of fatalities.
Learn More.

Rock at shallow depths that may be a concern when encountered in construction and other excavations.

Soil and/or rock that may be dissolved by water, causing a loss of internal structure and volume. The corresponding ground subsidence may lead to foundation collapse problems and may affect roads, dikes, underground utilities, and other infrastructure. 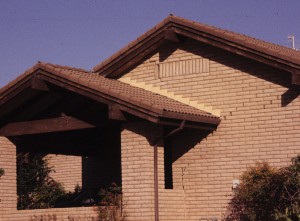 Expansive soil and rock that was not adequately considered during construction has produced cracks in the walls of this house in Santa Clara.

Impacts of Problem Soils and Rocks

Problem soils, such as expansive, compressible, and/or collapsible soils, can cause extensive damage to structures and foundations. Problem soils may also damage pavements after construction, resulting in high maintenance and/or replacement costs, along with increased legal and financial liability from pavement separation and/or gaps causing tripping hazards. In addition, future maintenance may disrupt business activities, resulting in increased costs and/or lost revenue. Except for radon gas, no deaths have been reported in Utah from other problem soil and rock hazards; however, they have caused an undetermined, but very significant, amount of infrastructure damage and resulting economic impact.