Summary of Springhill Landslide Movement and Conditions in 2009-2011

This section summarizes landslide conditions from summer of 2009 through fall of 2011. Precipitation for this time span is also discussed. 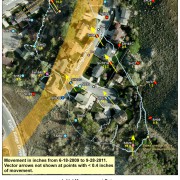 The landslide was active in the recent past and has been moving at a slow rate since at least January 2008. Measurements indicate that different parts of the landslide were moving at slightly different rates. In general, the landslide moved to the northwest, toward Valley View Drive. Ground deformation measurements were collected from survey markers using either a cloth measuring tape or survey-grade Global Navigation Satellite System (GNSS) instrument, depending on location.

Measurement of toe movement has been complicated because of the destruction and re-establishment of one of our stakes. Therefore, minimum cumulative toe shortening during this period of time was 20.2 inches.

The table below summarizes total measured ground deformation from June 2009 to August 2011.

Change in the Rate of Movement

Monitoring showed consistently slow movement of the landslide since at least 2008. Repeated monitoring of the rate of movement (the rate of change observed between measurement intervals) allows us to assess changes in these movement rates.

At the head of the landslide, very slow movement was recorded from June 2009 to February 2010. The rate of movement then increased until May 2010. Summer and fall of 2010 was again a time of very slow movement followed by a significant increase in the rate beginning in December 2010. This increased rate of landslide movement at the main scarp continued until June 2011 when a rapid decrease was recorded.

At the toe of the landslide, the rate of movement showed a similar general pattern. Toe movement was very slow from June 2009 to late summer 2010, when its rate increased significantly. This heightened rate continued until summer 2011, when toe movement again slowed substantially.

UGS geologists have been measuring groundwater levels in at least three observation wells (P-3, P-4, and P-5) at the landslide between June 18, 2009 and August 22, 2011.Of the three wells, P-3 and P-4 showed very little variability over the reporting period with ranges of 3.2 and 1.7 feet, respectively. Well P-5 recorded the greatest variability with a range of 6.4 feet. Well P-5 recorded a seasonal variation in groundwater levels with high levels coming in late spring or early summer and low levels in late summer.

Comparison of Groundwater Levels and Movement