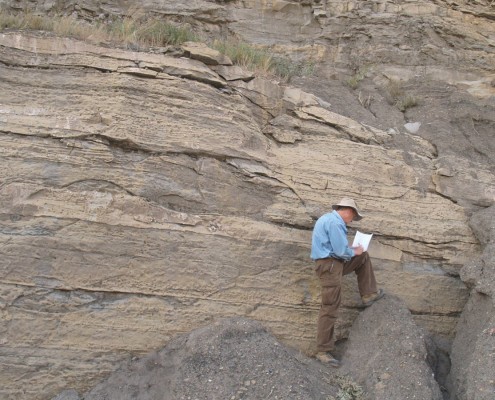 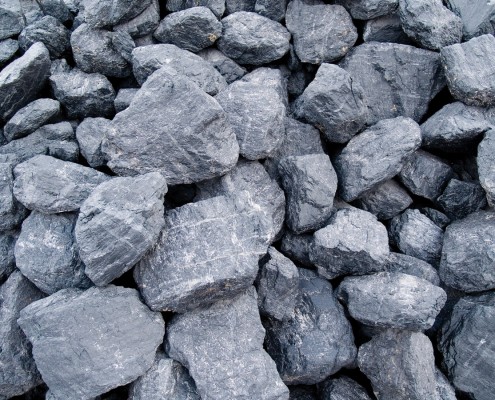 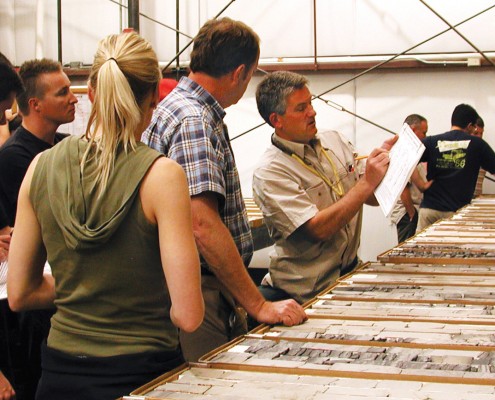 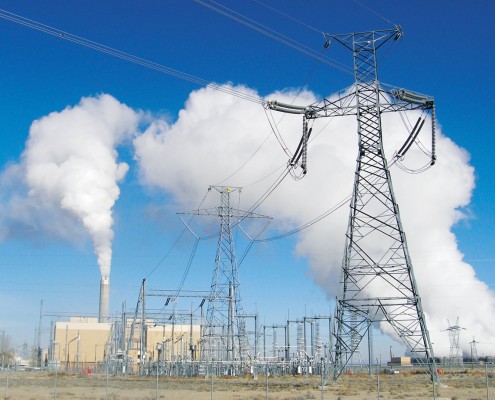 Michael Vanden Berg grew up in southwest Michigan where the saying goes, “lower Michigan has great geology only 1 mile away, straight down through the glacial till.” Despite this fact, Mike received a B.S. in geology from Calvin College in Grand Rapids, and then headed west to play with “real” rocks in Utah. After completing his M.S. degree in geology at the University of Utah, Mike joined the Utah Geological Survey and has been there ever since, going on 18 years. Mike has been a licensed professional geologist in the State of Utah since 2008 and is currently the UGS Energy and Minerals Program Manager. Mike leads a diverse team of geoscientists that research all aspects of Utah’s natural resource development including metals (with a current emphasis on critical minerals), industrial minerals, oil and gas, coal, geothermal, and investigations into carbon sequestration and utilization opportunities.

Mike has extensive experience in obtaining and managing large, multi-year and multi-faceted, energy-related research projects for the State of Utah and has published more than 30 peer-reviewed papers and over 100 abstracts. His main area of research focuses on the petroleum-bearing lacustrine Green River Formation in the Uinta Basin; more recently he has investigated modern Great Salt Lake, including its extensive microbialites, as an analogue for ancient lacustrine deposits.

Mike is also the author of several energy-related reports (e.g., Utah’s Energy Landscape, Energy Chapter for the Economic Report to the Governor) and serves as an energy expert on several state committees (e.g., member of the State of Utah Revenue Assumptions Working Group, supplying energy and metal related price and production forecasts).

Mike has been an active member of AAPG since 2008, including participation on the Rocky Mountain Section executive committee from 2010 to 2014, serving as RMS president in 2013. He also served as General Co-Chair of the 2013 AAPG-RMS meeting in Salt Lake City and as General Chair of the AAPG ACE meeting in 2018.

Taylor Boden joined the Utah Geological Survey in 2004 and is a Geologist with the Energy and Minerals Program. He has worked on a wide range of projects involving Utah’s industrial and metallic mineral resources.

Katie Cummings joined the Energy & Minerals Program at the Utah Geological Survey in December 2021 and serves as the Utah Core Research Center Curator. Katie received her B.S. in geology from the University of West Georgia in 2011 and her M.S. in geology from East Carolina University in 2014. Prior to joining the UGS, Katie worked as a geologist at the North Carolina Geological Survey (NC STATEMAP) from 2014 to 2015 and as a geologist in the aggregate mining industry from 2016 to 2021. Katie’s professional experience includes planning and management of geologic drilling projects for subsurface sample collection, management of subsurface sample collections and associated datasets, identification and characterization of viable aggregate deposits (stone, sand, and gravel), and aggregate extraction planning.

Tom Dempster is a Senior Geological Technician with the Energy and Minerals Program and serves as the Assistant Curator of the Utah Core Research Center (UCRC). He holds a B.A. in American History from the University of Kansas and started with the UGS as a warehouse worker in November 2000. Tom received the Employee of the Year award in 2007 for all the many projects he accomplished for the different programs of the UGS.

During Tom’s tenure with the UGS, he has been a member of the AAPG, GSA and Friends of Paleontology. He continues to monitor activities of national and international professional groups to keep in touch with oil and gas information that might benefit future research at the UCRC.

Ryan Gall is a Geologist with the Energy and Minerals Program at the Utah Geological Survey. Following degrees from Colorado College (B.A. geology) and the University of Utah (M.S. geology), Ryan worked in the petroleum and mining industries for several years and joined the UGS in September 2018. With an affinity for the Uinta Basin, Ryan primarily focuses on outcrop and core studies to understand Utah’s economically important resources and the ancient processes that created them.

Christian Hardwick is a Senior Geologist and geophysicist at the Utah Geological Survey, joining the Survey in 2011. He is the Geothermal Section manager within the Energy and Minerals program, and he also provides geophysical support for the Groundwater, Hazards, and Geologic Mapping Programs. Before re-entering academic pursuits, he was a journeyman carpenter based out of McMurdo, Antarctica, for the United States Antarctic Program (USAP). During his 4-year stint in the USAP he setup, maintained, and disassembled field camps for scientific researchers on Antarctic land, volcanoes, glaciers, coasts, and sea ice as well as built custom apparatuses and enclosures for scientists. After the USAP and prior to joining the UGS he worked at the Thermal Geophysics Research Lab, University of Utah, where he measured thermal conductivity, wrote computational code and programs in multiple computer languages, and worked with lab colleagues on research projects involving micro gravity, paleoclimate, hydrology, geothermal systems, global heat flow, and isostacy.

Christian received a B.S. in geoscience with emphasis in geophysics from the University of Utah in 2010 with the recognition of outstanding undergraduate student in geophysics. He was selected for and satisfactorily completed the Summer of Applied Geophysical Experience (SAGE) in 2010 hosted by Los Alamos National Laboratory and held in Santa Fe, New Mexico. He was one of the few SAGE students that received the ExxonMobil SAGE Scholar recognition and award. Christian participated in the National Science Foundation (NSF) funded International Research Experience for Students (IRES) program in 2011, along with only 3 other students. This IRES program took place at an active geothermal field near Taupo, New Zealand, and focused on geothermal exploration emphasizing surface geophysical methods. Christian received a M.S. in geophysics from the University of Utah in 2013.

Christian specializes in applied geophysical methods of gravity, magnetotellurics, transient electromagnetics, thermal fields, and heat flow. His work includes modeling and interpretation of geophysical data combined with borehole information, geologic data, temperature logs and downhole geophysical logs in an integrated approach. He is the manager of UGS geophysical equipment, data acquisition, processing and preservation. He is the lead pilot for the UGS small unmanned aerial system (sUAS) program where aerial survey data are collected and used to produce high-resolution maps and terrain models for various studies. He also runs and manages the UGS Thermal Geophysics Research Lab where thermal and other physical properties of earth materials are measured, downhole temperature data is processed and analyzed, and new research equipment is developed and tested for lab and field use.

Will Hurlbut (he/him) is a Geologist with the Energy and Minerals Program at the Utah Geological Survey. He graduated with a B.S. from the University of Utah and joined the UGS in 2017, specializing in applied geophysical methods of gravity, transient electromagnetics (TEM), and magnetotellurics to identify and characterize geothermal resources throughout Utah. He also performs lab work measuring thermal conductivity and heat flow properties of rock samples. In addition, Will collaborates on projects with the UGS Groundwater & Wetlands Program to complete geophysical surveys collecting gravity measurements and TEM measurements to assist characterization of hydrological study sites.

Elliot Jagniecki is a Senior Petroleum Geologist with the Energy and Minerals Program at the Utah Geological Survey. He received a Ph.D. from Binghamton University in 2014 and worked five years at ConocoPhillips in Houston prior to joining the UGS in September 2018. Beyond his extensive knowledge in petroleum geology, his expertise includes sedimentology, evaporites, lacustrine systems, and geochemistry. He coordinates research with government, industry, and academic partners on assessing petroleum resources and characterizing Utah’s geology.

Stephanie Mills is a Senior Geologist with the Energy and Minerals Program. She started with the UGS in January 2019 and is an economic geologist specialized in metallic mineral resources. She received her B.S. Hons degree from the University of Texas at Austin in 2009 and her Ph.D. from Monash University in 2014. Stephanie has over a decade of experience researching and working in minerals exploration across the globe, and her specialization is in magmatic-hydrothermal systems with a focus on porphyry, skarn, epithermal, and Carlin-style deposits. She is a registered professional geologist and a Fellow of the Society of Economic Geologists.

Andrew Rupke joined the Utah Geological Survey in 2010 and is a Senior Geologist and industrial minerals geologist in the Energy and Minerals Program. Prior to joining the UGS, he worked as a geologist in the lime industry for over six years. His work and research at the UGS focus on Utah’s diverse industrial mineral resources including potash, phosphate, salt, high-calcium limestone, aggregate, gypsum, and others. He received a B.S. in geology from Calvin College in Grand Rapids, Michigan, in 2000 and a M.S. in geology from the University of Utah in 2003. He is a registered Professional Geologist in Utah.

Kayla (she/her) joined the Utah Geological Survey in July 2021 after completing her M.S. degree at Utah State University. Her graduate research focused on detailed core characterization and subsurface analysis with an emphasis on geochemistry and structural geology. Kayla earned her B.A. in geology and environmental science with honors in biology from Mount Holyoke College. Kayla works primarily with the geothermal team of the Energy & Minerals program to collect data and process geophysical surveys. She also contributes to various projects requiring handheld X-ray fluorescence (XRF) geochemical analysis.

Eugene is a Senior Geologist in the Energy and Minerals Program and joined the UGS in 2021. His research interests include landscape evolution, basin characterization, chronostratigraphy, and source-to-sink analysis of modern and ancient depositional systems. In particular, he enjoys applying diverse geo-/thermochronological techniques to these systems for the purposes of intrinsic academic study and energy & mineral resource assessment. He has worked in hydrocarbon exploration, strategic geologic research, and applied technology development during his career and, prior to joining the UGS, Eugene held a role as Senior Technical Geologist in the Chevron Technology Center in Houston from 2014 to 2021. Eugene currently holds Adjunct Faculty appointments at The University of Kansas and The University of Arkansas where he co-advises students and collaborates on research projects. He works synergistically with many academic groups, analytical laboratories, and consortia and enjoys serving on Geological Society of America committees. Eugene earned a B.S. in geology from Bloomsburg University of Pennsylvania in 2000, a M.Sc. in geophysics from Boston College in 2005, and a Ph.D. in geology from The University of Kansas in 2013.