Utah in the Age of Dinosaurs

Dinosaurs lived only during the Mesozoic Era, which is often called the “Age of Dinosaurs.” Utah has perhaps the best Mesozoic rock record in the world.

The Mesozoic Era (252 to 66 million years ago) is divided into three time periods: 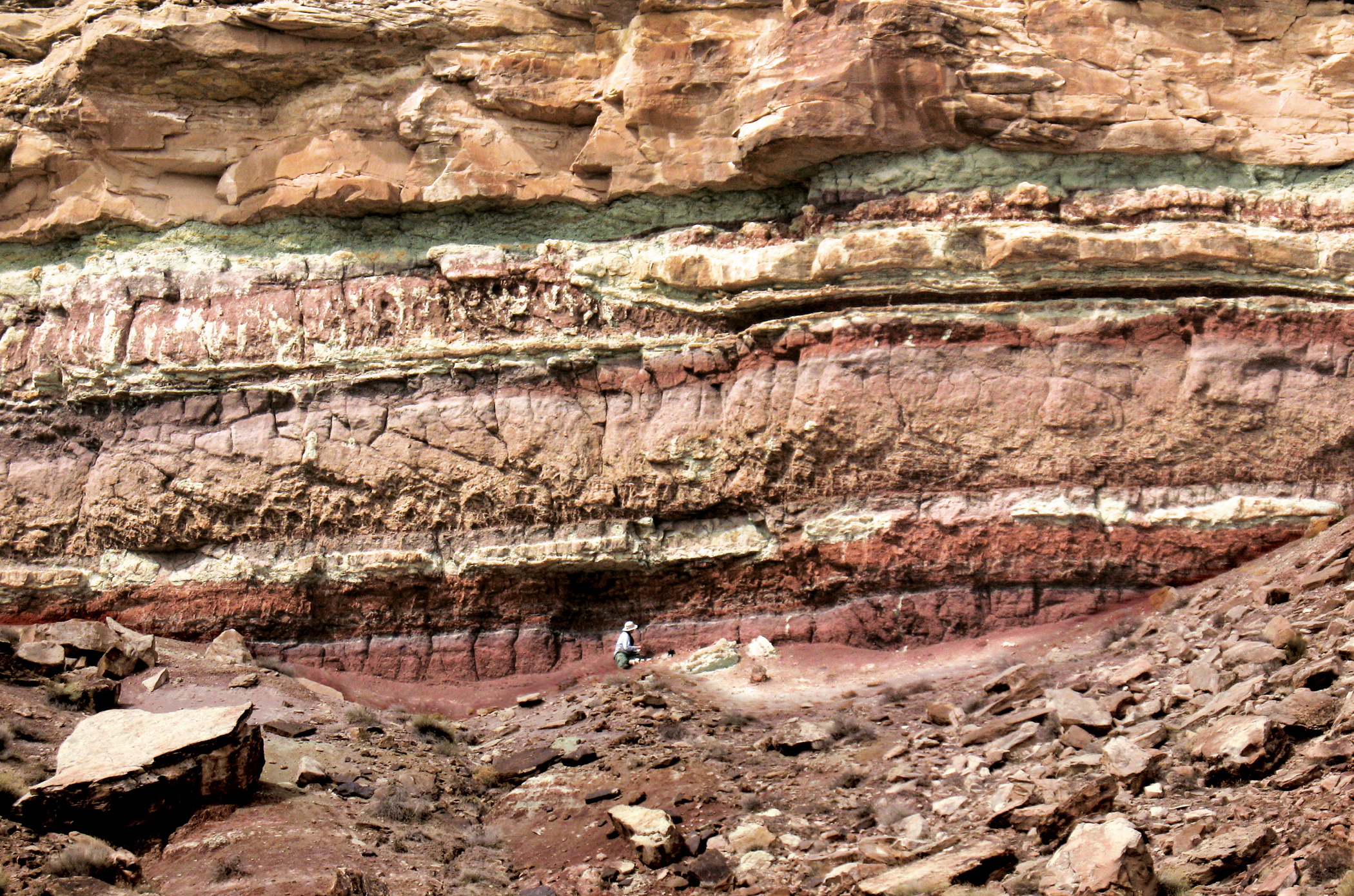 Early Cretaceous dinosaur fossils are found in Utah in the Cedar Mountain Formation, which dates to about 125 to 98 million years ago. This rock unit overlies the Morrison Formation, but represents more time and contains several entirely different faunas or groups of dinosaurs. These rocks represent a time when North America was connected to Europe before flowering plants, a period when rising sea levels led to the isolation of North America from the rest of the world, and finally a time when the first land connections with Asia were established and flowering plants had come into their own. The Cedar Mountain Formation is the basis of considerable research by UGS paleontologists.

Late Cretaceous dinosaurs such as Tyrannosaurus and Torosaurus lived about 65 million years ago at the end of the age of dinosaurs. Cretaceous dinosaur sites are found in great abundance in Montana and Alberta, Canada, and are also found in the North Horn Formation of central Utah. Farther south in the Grand Staircase – Escalante National Monument the most continuous record of Cretaceous dinosaurs in the world has now been recognized and research is just beginning to bring these many undescribed Utah dinosaurs to light.

Photo caption: A geologist examines a sequence of Early Cretaceous-aged paleosols (ancient soils) in the Yellow Cat Member of the Cedar Mountain Formation. Many dinosaur fossils are found in these rocks, and the study of paleosols can provide valuable information about the environments in which these dinosaurs lived. Poison Strip area, east of Arches National Park, Grand County, Utah. Photographer: Don DeBlieux

During the Early and Middle Jurassic, Utah was mostly desert, although periodically sea level would rise and the sea would invade this sand dune-covered landscape. The great sandstone cliffs of Zion and Arches National Park are basically fossil sand dunes. Although dinosaur footprints are known from many sites in Utah, no dinosaur skeletons have yet been found in these desert rocks. Marine reptiles have been found in marine rocks near Dinosaur National Monument.

Most of Utah’s well-known dinosaur fossils are Late Jurassic-age dinosaurs. They are found mainly in a rock unit known as the Morrison Formation which dates to approximately 150 million years ago. Dinosaur fossils from the Morrison Formation can be found in Utah at the Dinosaur National Monument quarry in northeastern Utah and at the Cleveland-Lloyd Dinosaur Quarry in east-central Utah. Allosaurus is Utah’s State Fossil. Allosaurus is a carnivorous theropod found in abundance at the Cleveland-Lloyd Dinosaur Quarry.

The first dinosaurs lived near the end of the Triassic. Eoraptor, a bipedal carnivore recently discovered in South America, is the earliest known dinosaur.

Triassic dinosaurs have not been widely found in Utah. Upper Triassic rocks known as the Chinle Formation are exposed throughout southern and eastern Utah, as well as Arizona and New Mexico. This rock unit has yielded abundant remains of the carnivorous (meat-eating) dinosaur Coelophysis and others in New Mexico and Arizona. Although some footprints and non-dinosaur vertebrate fossils have been described in the Chinle Formation in Utah, only one non-ambiguous Triassic dinosaur body fossil has been found. It is most likely in the Coelophysis genus based on sacrum morphology. The altitude of Utah during the Triassic was higher than that of the extensive dinosaur-producing quarries of New Mexico and may be a factor in why Triassic dinosaurs are so rare in Utah. 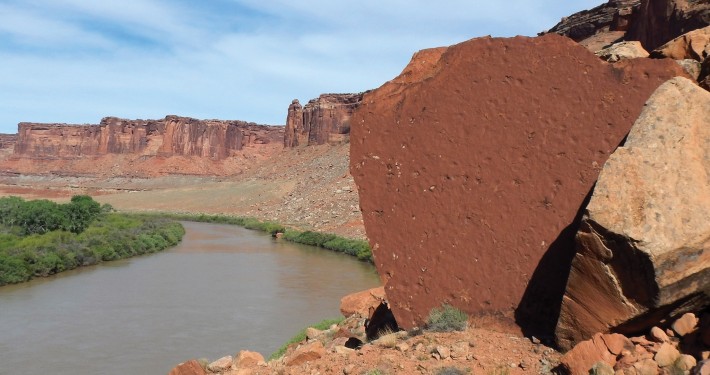 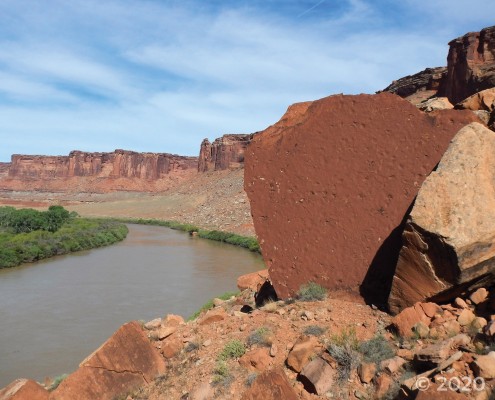 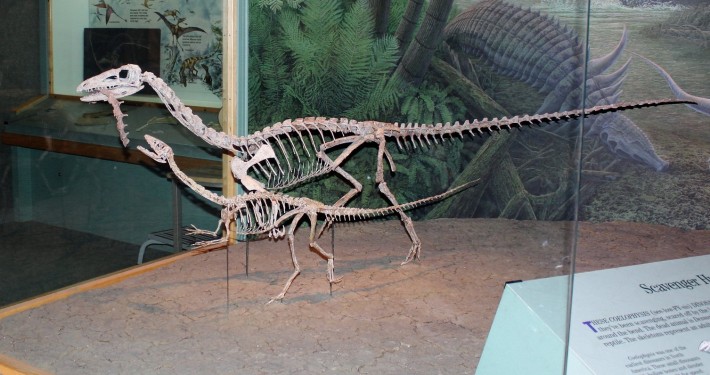 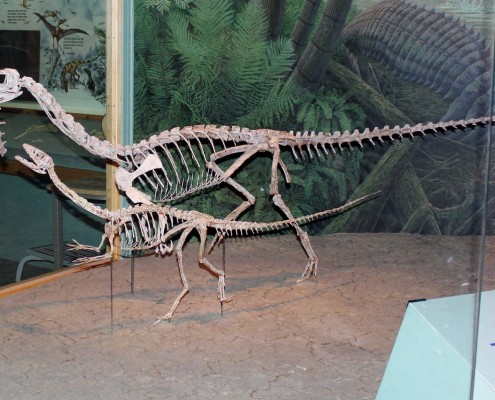