Oil and Gas in the Uinta Basin, Utah – What to do with the Produced Water

Stratigraphic column from the surface down through the Upper Triassic-Lower Jurassic-age Nugget Sandstone in the Uinta Basin showing major oil- and gas-producing reservoirs, seals, water disposal zones, and shallow groundwater aquifers. Modified from Hintze and Kowallis (2009), Geologic History of Utah.

Oil and gas fields in the Uinta Basin of eastern Utah produced about 24 million barrels of oil and 280 billion cubic feet of gas in 2016 from the 56 to 44 million-year-old Tertiary Wasatch and Green River Formations and the 73 to 66 million-year-old Upper Cretaceous Mesaverde Group. Pores in the reservoir rocks that contain oil and gas also include water. This water has resided in the rocks for thousands and perhaps millions of years. Over time, the water naturally dissolves minerals in the surrounding rock, adding chemical constituents such as chlorides or bicarbonate to the water, which is produced along with the oil and gas.  The hydrocarbon production generates over 78 million barrels of saline (briny) non-potable water that requires disposal. To put this in perspective, Utahns use an average of 3.6 billion barrels of water per year or 5,200 barrels per household.

The environmentally sound disposal of produced water affects the economics of the hydrocarbon resource development in the basin. Thus, there is an economic incentive to minimize the amount of water produced and/or generate revenue by treating and reusing produced water, particularly in arid regions of the West. Specific Uinta Basin water issues include water use/reuse for well drilling and completion (e.g., hydraulic fracturing [HF or “fracking”]; see Survey Notes, v. 44, no. 2), appropriate sites for disposal/reuse of water, development of systems to manage the produced water streams, and differing challenges for gas versus oil producers. 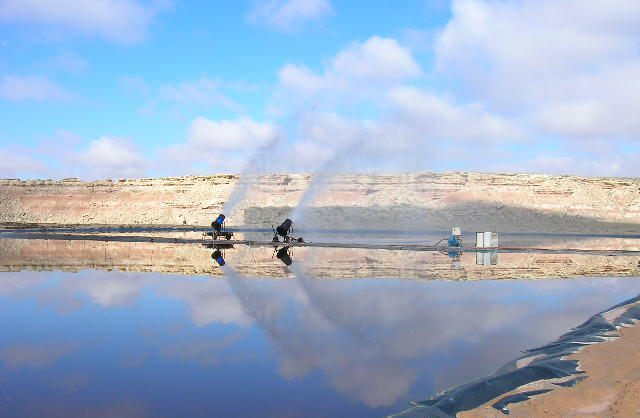 In late 2012, the Utah Geological Survey (UGS) was funded by the Research Partnership to Secure Energy for America (RPSEA) to address all these issues and conduct a study detailing what to do with the produced water in the Uinta Basin (see Survey Notes, v. 45, no. 1, p. 10–11). This now-completed study included (1) describing and mapping the major oil and gas reservoirs and aquifers in the basin, (2) characterizing the quantity and quality of water produced, and (3) helping define best management tools and options to dispose of the produced water economically and safely. Our study evaluated the thickness, structure, porosity, permeability, water quality, and temperature of all aquifer/reservoir units in the basin from the Eocene-age Green River Formation through the Jurassic-age Glen Canyon Group.

Large volumes of produced saline water are typically disposed of by several techniques. Less than 3 percent of the produced water is used for HF. If natural gas prices rebound and gas exploration and drilling increase, more produced water could be used in HF of “tight” (low-permeability) sandstones, and possibly more prospective shale reservoirs (see Survey Notes, v. 43, no. 2).

The Uinta Basin of eastern Utah showing oil and gas fields. The number of produced-water disposal wells is shown in parentheses near field names, those fields with enhanced-oil-recovery (waterflood) projects are labeled in blue, and locations of evaporation ponds are represented by blue squares.

Waterflooding projects use 18 percent of the total produced water, but this accounts for only 50 percent of the need so the shortage is made up with freshwater supplies. Thus, excess compatible produced water from gas wells could increasingly be transported to oil fields undergoing EOR. Finally, about 60 percent of the produced water in the Uinta Basin is injected via wells into porous rock at a sufficient depth as to not cause contamination of shallow freshwater aquifers. The natural groundwater in deep aquifers is characterized as saline because it contains total dissolved solids (TDS) concentrations greater than 10,000 milligrams per liters (mg/L) (Class IV groundwater by the Utah Department of Environmental Quality). Most produced water also has TDS concentrations greater than 10,000 mg/L and therefore can be stored in deep Class IV aquifers.

Schematic diagram showing oil and gas wells and hypothetical zones to dispose of the produced water.

Injection is the preferred method of disposal over evaporation ponds. Injection of high volumes of produced water near fault zones is known to cause significant earthquakes in Oklahoma and other states. However, no such seismic events have been recorded in Utah from water injection because the aquifers are low pressure and faulting in the areas is limited; most injection sites are remote and away from populated areas.

The results of our study were published in November 2017 as UGS Bulletin 138, Produced Water in the Uinta Basin, Utah: Evaluation of Reservoirs, Water Storage Aquifers, and Management Options. The study provides a framework to address the varied water uses and disposal interests of various stakeholders and is helping industry, particularly small producers and regulators, make informed management decisions.