The new Interactive Geologic Map of Utah is built from more than 300 published geologic maps. 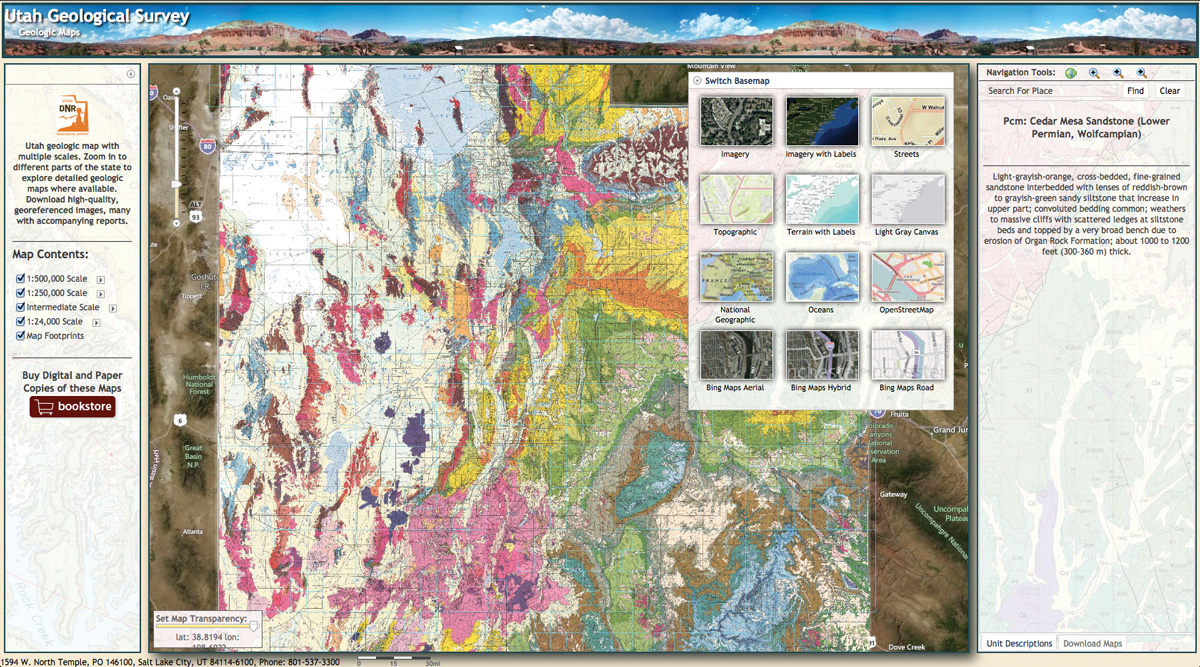 Have you ever wanted to know the geologic formation your house is built on, the name and age of the rocky ridge exposed across the valley, or the identity of that colorful formation that caught your eye on your last vacation? Now you can find out this and other basic geologic information for much of the state with just a few clicks of a mouse.

The UGS recently posted a new interactive geologic map database to our website that allows you to quickly learn these types of facts, plus download many geologic maps as PDFs, georeferenced tifs, or GIS (Geographic Information System) shapefiles. Over 300 of our most popular geologic maps are already posted to the interactive map; approximately 400 more will be posted over the next year or two.

Created by UGS geologists/computer specialists Marshall Robinson and Lance Weaver, with many suggestions from Grant Willis, Buck Ehler, Kent Brown, Bob Biek, and other UGS personnel, the interactive map quickly became one of the most popular hits on our website.

To make the interactive map, UGS personnel scanned, cleaned, cropped, and geo-referenced (placed in correct geographic position) published geologic maps. Users can view any of these maps by simply clicking anywhere on the map screen, turning layers of maps on or off, and zooming in or out. Most of these maps can be downloaded as well.

Perhaps the most useful feature of the interactive map, the ability to query any location in the state, is based on approximately 35 key geologic maps of 30′ x 60′ quadrangles and similar areas. Over the past 15 years, the UGS Mapping Program has produced GIS databases of existing maps where possible, and of new geologic maps of other areas, most at scales of 1:24,000, 1:62,500, or 1:100,000.

Every map “polygon” (formation, outcrop, or deposit) is “attributed” with its name, geologic age, primary composition, and other basic information. Additional detailed descriptions of map units accompany most maps. When you click on any polygon, this information pops up in a text window beside the map, giving you a quick answer to your question. Approximately 70% of the state is now completed and posted to the interactive map; another 15% is in progress. Popup information on the incomplete areas is based on the less-detailed state geologic map, which is being supplanted block by block as new maps are completed.

Users can quickly switch between base (background) maps that show roads and towns, topographic contours, detailed orthophotographic images, or other features, so they can see the geology in relation to places or features they know.