A Hydrometeorological Network Maintained by the Utah Geological Survey 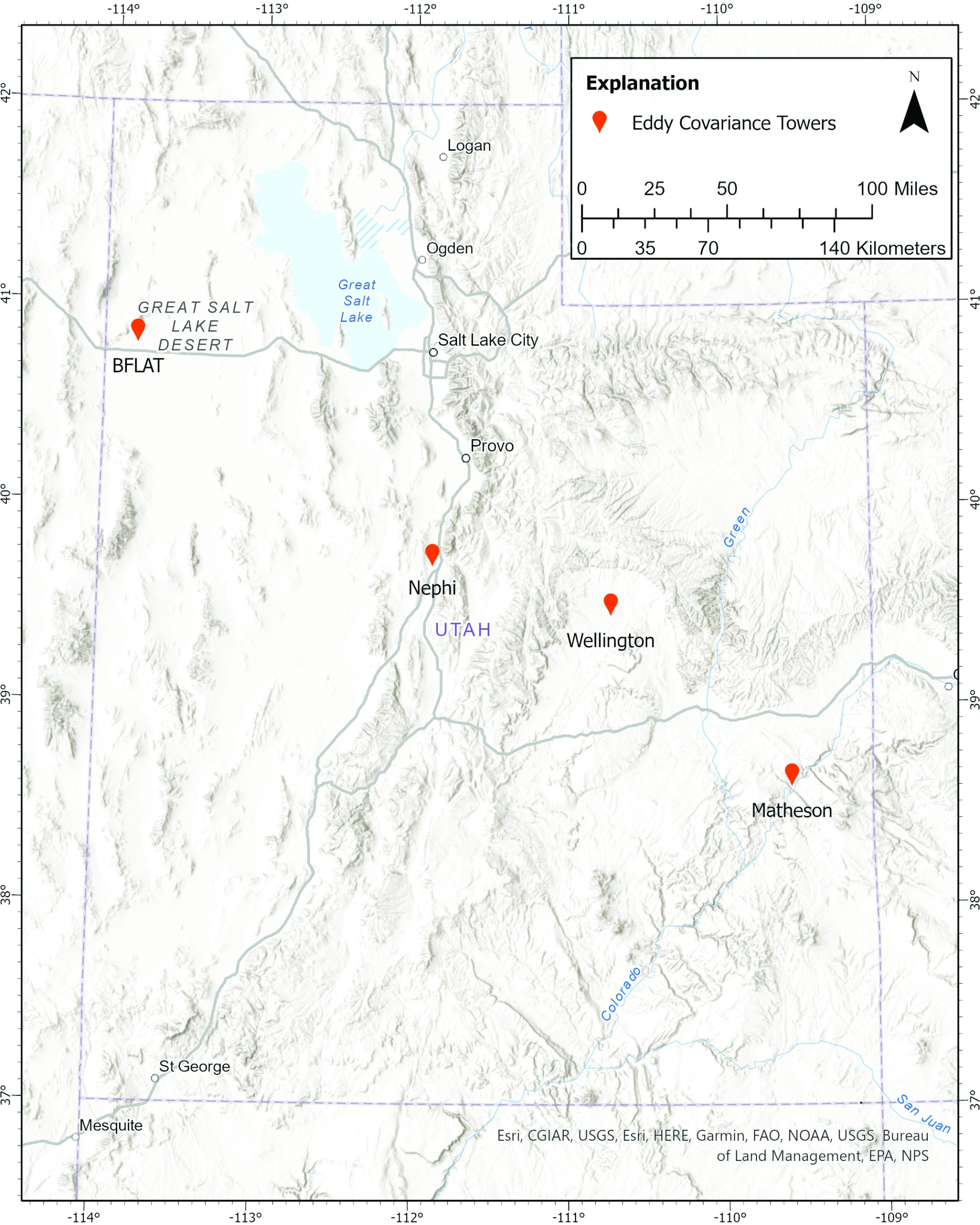 The Utah Geological Survey (UGS) is establishing a network of weather stations throughout the state of Utah, known as the Utah Flux Network (UFN), to measure evapotranspiration. Evapotranspiration is water that is evaporated from the land’s surface and transpired by plants, and it is an important part of Utah’s water budget, as it is one of the main ways water leaves Utah. We will collect long-term baseline measurements of evapotranspiration, compile existing data to make it widely available, and compare our data with remotely sensed (satellite-based) models.

The main goal of the UFN is to provide ground-truth data for satellite-measurement-based estimates of evapotranspiration, though the network will serve many additional purposes. These data will give water managers tools to deal with drought, allowing them to accurately measure water conserved or used by agriculture. Data from the UFN will also support long-term water conservation and management strategies, such as water banks—for example the pilot Price Water Bank project which converts conserved agricultural water into instream flow near Price, Utah—and measuring consumptive use in the Upper Colorado Basin to help administer the Colorado River Compact. Our data can also be used for hydrologic and climate models because these stations measure important components of the atmosphere, including carbon dioxide (CO2), water (H2O), and available energy. 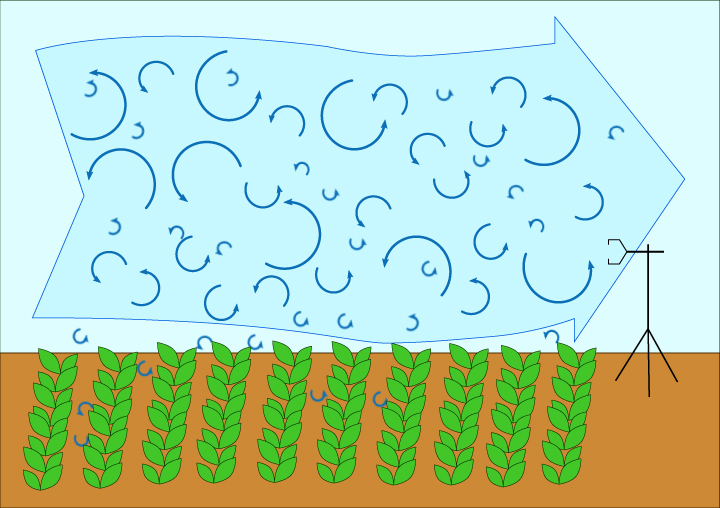 Conceptual movement of wind eddies near a field. Modified from George Burba.

A large portion of evapotranspiration in vegetated areas, including croplands, is due to consumptive use, which is the water that cannot be recovered or reused, including water consumed by plants and water evaporated. Winds blow over the land surface, removing evapotranspired water, allowing more water to be evapotranspired in its place. The wind carries the water vapor and other gasses in turbulent, whirling, circuitous paths known as “eddies.” The UFN uses the eddy covariance technique to measure these rapidly changing eddies.

The eddy covariance technique requires accuracy in data collection and correction to calculate valid evapotranspiration values, which is dependent on available energy. Our measurement goal is energy balance, which occurs when all incoming and outgoing energy components are accounted for and the following equation is met: Rn-G=LE+H, where Rn is net radiation, G is ground heat flux, LE is latent heat flux, and H is sensible heat flux. Latent heat is the energy required for a substance to change state, such as from liquid to vapor during evapotranspiration, and sensible heat is the energy required to change the temperature of a substance. Net radiation is the sum of incoming and outgoing shortwave and longwave radiation. Shortwave radiation is energy emitted by the sun, some of which is reflected by the earth’s surface and some absorbed. The ability of a substance to reflect shortwave radiation, controlled by the substance’s color and texture, is called albedo. Absorbed shortwave radiation warms the earth’s surface, which then emits longwave radiation. Clouds and greenhouse gasses, such as CO2, absorb the outgoing longwave radiation, warming the lower atmosphere. Balancing these energy fluxes is difficult to achieve and requires great effort to collect quality data, as well as a lengthy data post-processing protocol. 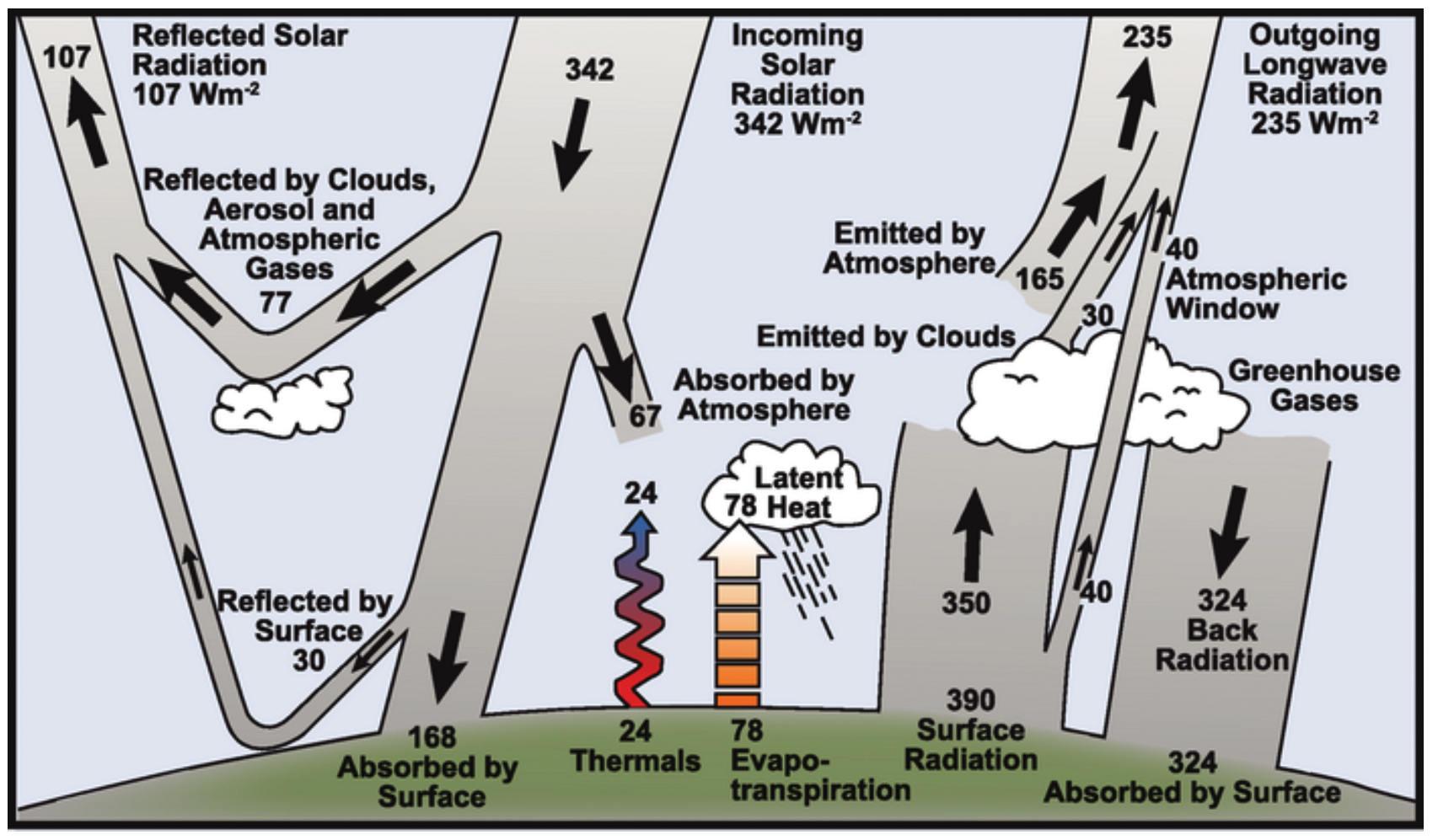 UFN eddy covariance stations are built from common weather station instruments, including devices that measure the wind speed and direction (anemometers), precipitation buckets, thermometers, and humidity probes. In addition, each station includes equipment to precisely measure the movement of water vapor, CO2, and energy in and out of the area of the station. Net radiometers and soil heat flux plates help estimate energy stored and released by the soil. Sensible heat flux is calculated using multiple thermometers placed on the station at different heights, as well as some buried in the soil at different depths. All of these instruments are highly accurate, and many of them can measure very rapidly.

The UFN is also investigating the viability and applicability of the surface renewal technique, which is less costly, but not as well documented as the eddy covariance approach. The surface renewal method uses high-speed temperature and wind measurements to calculate sensible heat flux, from which latent heat flux and evapotranspiration can be calculated.

So far, we have constructed four eddy covariance stations in Utah, which comprise the UFN. The stations have been placed in a variety of ecosystems. Two of our stations are on agricultural sites, one is on a wetland, and one is on a salt flat (i.e., playa dominated by halite and gypsum deposits). With the emplacement of these stations, and the potential for more, we are working to develop an effective protocol for managing the stations and their data. 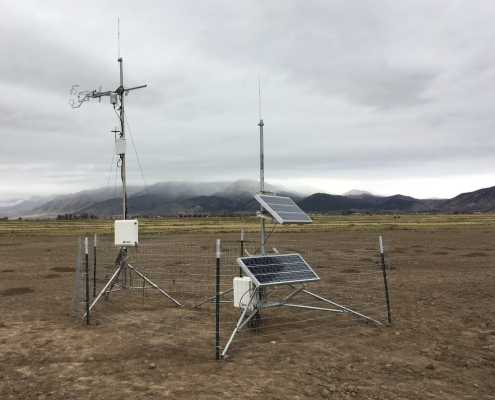 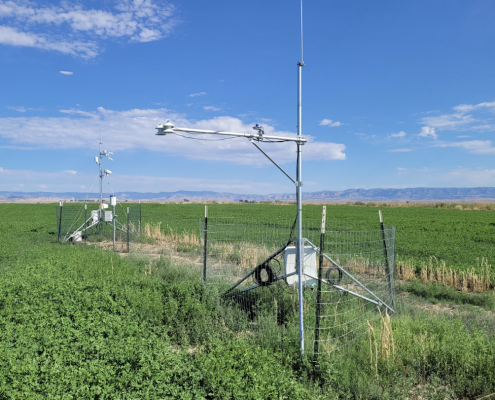 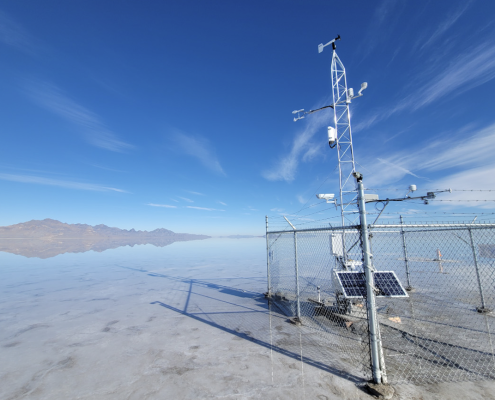 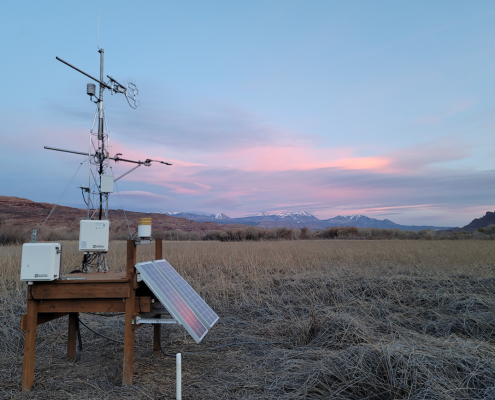 We constructed our first stations in 2018 in Juab Valley, funded and supported by the Utah Division of Water Rights. One station was constructed in a wetland ecosystem near Mona and the other was placed in between three pivot-irrigated fields west of Nephi. These stations were intended for short deployment and originally had only anemometers and hygrometers (which measure water vapor), with no way to measure energy balance. We have since invested in upgrading these stations with four-way net radiometers and soil heat flux plates so that we can measure energy balance. The station in Mona was decommissioned in 2020.

In early March of 2021, with significant funding and support from the Central Utah Water Conservancy District and technical assistance from Trout Unlimited, we installed our first fully equipped eddy covariance station between two pivot-irrigated alfalfa fields near Wellington, Utah, in Carbon County. Part of the impetus for this station was to provide ancillary data to a water banking study with Carbon Canal irrigation water, where instream flow is preserved by providing water conservation incentives to farmers. 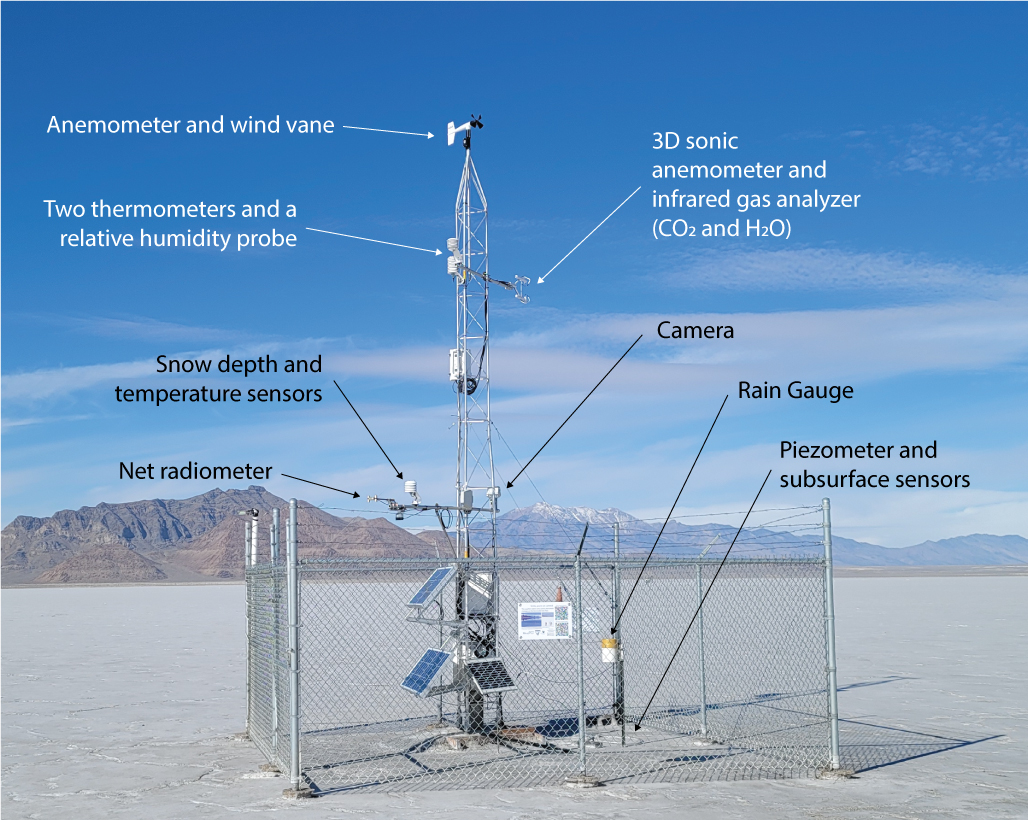 In September 2021, we assumed control of a weather station on the Bonneville Salt Flats (BFLAT), previously operated by the University of Utah. We disassembled the old station and installed an eddy covariance tower in its place. This station is surrounded by salt flats and, in addition to being used for our research efforts, it provides important weather information for the Bonneville Speedway. This station is also part of the Mesowest weather network and includes a time-lapse camera that takes photographs of the salt flats every five minutes. Mesowest compiles weather data from many public weather data sources, providing access to current and past conditions across Utah.

In early October of 2021, we installed a station in the Matheson Wetlands Preserve in Moab, Utah, using some of the components from the decommissioned Mona station. The Matheson station was placed on a deck because the area is subject to periodic flooding and the tower is surrounded by bulrushes. This station is part of a larger study to understand the water budget of a wetland system adjacent to the Colorado River.

In fall of 2021, we were awarded a U.S. Bureau of Reclamation (USBR) WaterSmart grant. This grant will allow us to purchase upgraded equipment for the Matheson and Juab stations, making them consistent with the Wellington and Bonneville stations. The USBR funding will also allow us to purchase equipment to calibrate our instruments. Most importantly, the grant will help us develop our data processing and site maintenance workflows.

The stations are already measuring large amounts of data and station programs allow for rapid on-the-fly estimates of evapotranspiration over time. These data are available immediately on the UFN website. We are currently working on post-processing workflows to find and remove erroneous measurements. With the support of eddy covariance expert Dr. Larry Hipps at Utah State University, we strive to ensure a good quality assurance program is in place.

We will upload our data to the AmeriFlux webpage once we have a year of post-processed data that we feel is a competent representation of the conditions at our sites. AmeriFlux is a network of eddy covariance stations in the Americas that focuses on measuring methane and carbon dioxide fluxes. AmeriFlux is part of a global network called FluxNet, which consists of over 1,000 stations located all over the globe. Data from these networks are used to calibrate global models of climate change and hydrology, including models compiled for the OpenET ensemble of models.

OpenET is a massive collaborative effort between NASA, JPL, USBR, and many others that was developed recently and made available to the public in 2021. It uses remotely sensed energy data to estimate evaporation through a compilation of models. UFN stations will help ensure that models like the ones used in OpenET are representative of the conditions observed in Utah.

In July 2022, the Colorado River Authority of Utah entered into an agreement with the UGS to build six more stations in the Upper Colorado River basin. These new stations will significantly improve our measurement of evapotranspiration in Utah.

Where to Find Our Data

To see the most recent UFN data, go to our website at Utah Flux Network. Data for the Bonneville Salt Flats and Wellington stations can be accessed through Mesowest as stations BFLAT and WLGTN, respectively. In the future, our high-frequency and post-processed data will be available through Ameriflux. Only BFLAT (US-UTB) and Wellington (US-UTW) are listed on Ameriflux currently. 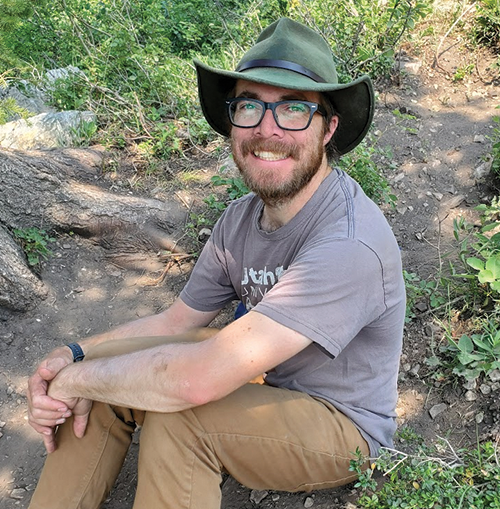 has been a hydrogeologist with the UGS Groundwater & Wetlands Program since 2009. He has an M.S. degree in geology from Utah State University and a B.S. degree from the University of Southern Indiana. Paul is experienced in database management, geographic information systems, and Python scripting. He also teaches introductory geology at Salt Lake Community College. In his personal time, he is actively involved in the Utah Geological Association, maintains his vegetable garden, and spends time with his family. 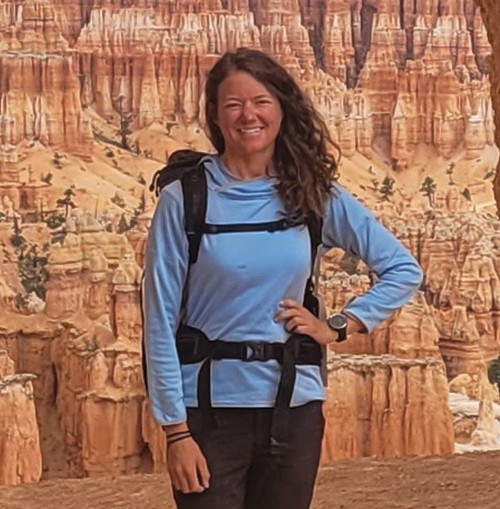 joined the UGS Groundwater & Wetlands Program in 2021. She has a B.A. degree in geology and environmental studies from Gustavus Adolphus College and an M.S. degree in earth science from the University of Maine. Kathryn has studied geology throughout the globe and was employed previously by the National Park Service to examine water quality of lakes and streams, calculate glacier mass-balance, mitigate geologic hazards, maintain weather stations, and map surficial geology. Her passions lie in tracking the impacts of climatic variability through both proxy and direct observation.