Mysteries of the Uinta Mountains – Commonly Asked Questions and Answers

By Douglas A. Sprinkel 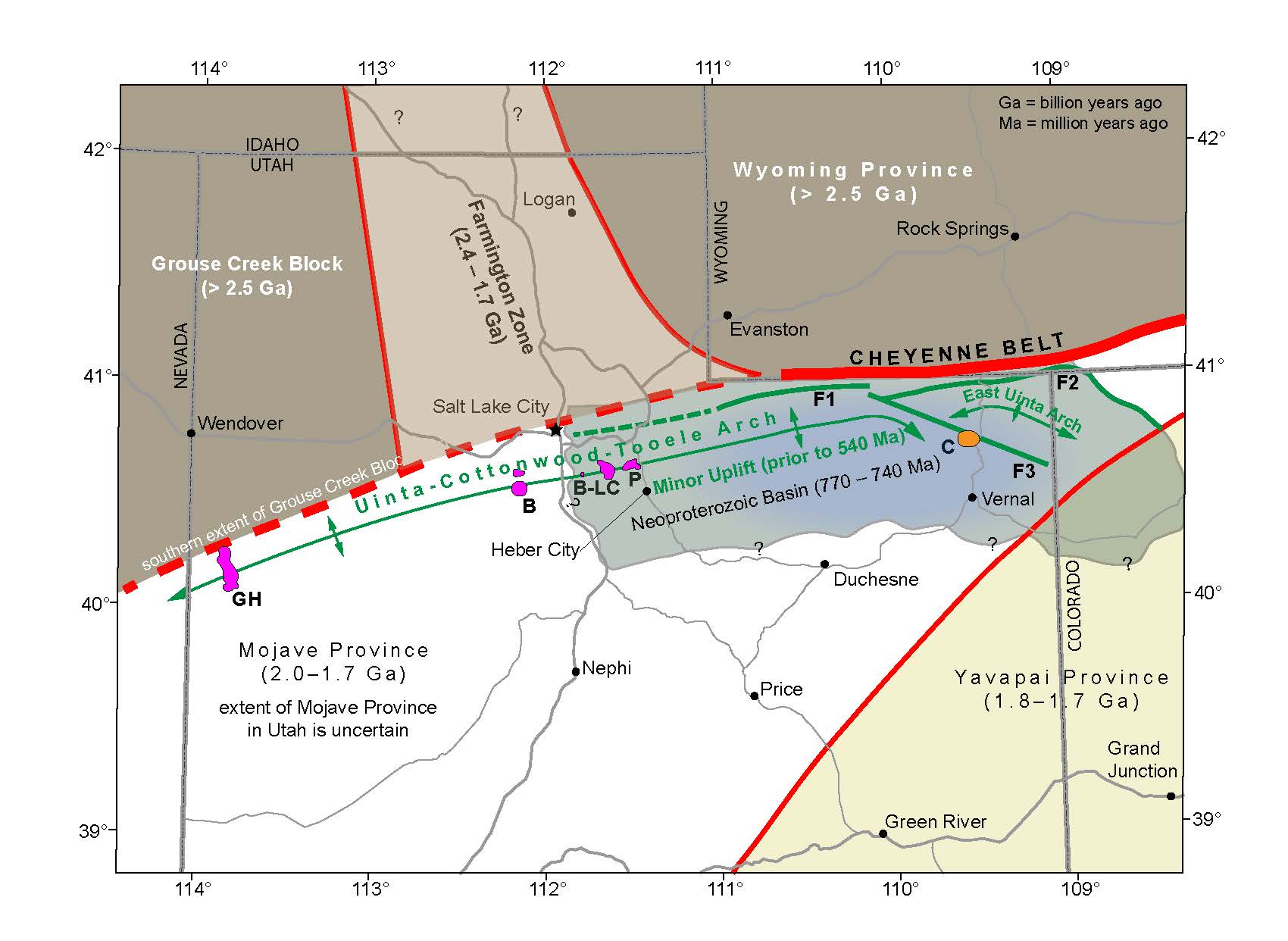 Paleoproterozoic basement rocks (Mojave and Yavapai) were sutured onto he Archean Wyoming province about 1.7 billion years ago along the Cheyenne Belt, a zone of weakness that has influenced sedimentation and structural deformations ever since. Soon after the Laramide uplift (between 70 and 34 million years ago), igneous intrusions and mineralization occurred along the Uinta arch creating rich mining districts (shown in purple) that extend from the Uinta Mountains west to the Utah-Nevada state line. These are: GH-Gold Hill, -Bingham, B-LC-Big and Little Cottonwood, and P-Park City. the Carbonate mining district (shown in orange and labeled C) is located along a northwest-trending fault that bisects the Uinta Mountains. Labeled faults are: F1-North Flank fault, F2-Uinta-Sparks fault, and F3-northwest-trending fault. 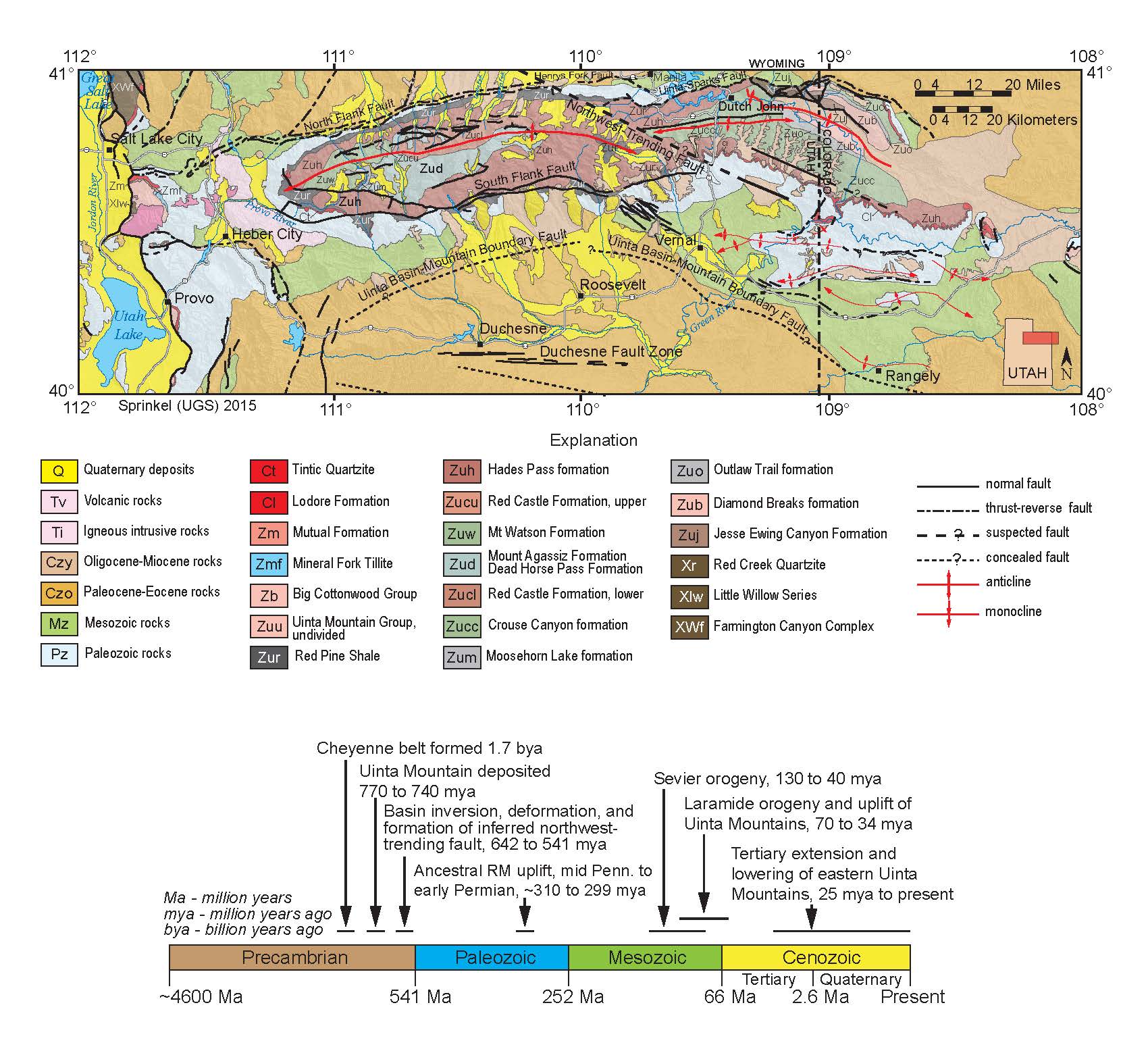 The majestic Uinta Mountains extend 150 miles from Kamas, Utah, eastward to Cross Mountain, Colorado. The range is a collection of mountains and plateaus that includes the high western peaks, lower eastern peaks, Diamond Mountain Plateau, Split Mountain, Blue Mountain Plateau, Yampa Plateau, and Douglas Mountain. The Uinta Mountains have been a source of natural resources and subject of exploration beginning several thousand years ago with the first Native Americans and followed by Spanish explorers, trappers, settlers, and scientists. Today, the Uinta Mountains still provide natural resources like timber harvesting, hunting, and recreation. The range also provides water for surrounding communities as well as the Wasatch Front. Stories of lost Spanish gold mines and questions about its east-west orientation are just some of the mysteries of the Uinta Mountains. I have been asked many questions about the Uinta Mountains over my past two decades of mapping the geology of the region, so it seems worthwhile to address the most commonly asked questions.

Do the Uinta Mountains have the oldest rocks in Utah?

The oldest rocks exposed in the Uinta Mountains are the 1.7 billion-year-old metamorphic rocks of the Red Creek Quartzite exposed in a small part of the eastern Uintas on Goslin Mountain and in Jesse Ewing Canyon north of Browns Park. However, they are not the oldest rocks in Utah. Those belong to the 2.7 billion-year-old metamorphic rocks of the Raft River Mountains in northwest Utah.

Are the Uinta Mountains the only mountain range in Utah that is oriented east-west?

The dominance of north-south-oriented mountains in Utah, especially in the western half of the state, gives the impression that the Uinta Mountains are unique. However, other mountains in Utah run east-west. The Traverse Mountains form a nearly east-west-oriented spur of the Wasatch Range that crosses Interstate 15 at Point of the Mountain. The eastern Book Cliffs, Roan Cliffs, and Tavaputs Plateau in east-central Utah also run east-west as do the Raft River Mountains.

Why do the Uinta Mountains trend east-west?

Regional mountain-building events drive the uplifts that form most major mountain ranges like the Uintas. The Uintas owe their east-west trend to an ancient crustal boundary where the Paleoproterozoic (2.0 to 1.7 billion-year-old) Mojave and Yavapai provinces were sutured onto the Archean (greater than 2.5 billion-year-old) Wyoming province, Grouse Creek block, and Farmington zone during a plate-tectonic collision event about 1.7 billion years ago. This suture zone, called the Cheyenne Belt, is an area of weakness that has influenced formation of structures and deposition of strata in the Uintas ever since. Later, a normal fault developed along the reactivated suture zone that formed the northern boundary of a Neoproterozoic (770 to 740 million-year-old) basin in which thick sand, gravel, and mud accumulated—today’s Uinta Mountain Group and the core of the Uinta Mountains. Prior to deposition of Cambrian strata about 550 million years ago, the basin was inverted along the same zone of weakness and the Uinta Mountain Group was slightly uplifted and broadly folded into the initial Uinta arch (also called the Uinta-Cottonwood-Tooele arch). Between 70 and 34 million years ago, the Uinta Mountains took shape during the Laramide orogeny (mountain-building event).

How much have the Uinta Mountains been uplifted?

Throughout much of its history the area of the Uinta arch was slightly below to slightly above sea level. When submerged, marine sediments were deposited over the arch, ultimately burying the top of the Uinta Mountain Group under about 20,000 feet of rock. During the Laramide orogeny, the mountains rose rapidly along faults. To bring Uinta Mountain Group rocks to their present elevation in the present Uinta highlands there must have been between 25,000 and 30,000 feet of uplift. But this is even more impressive when we consider that the Uinta Mountain Group in the adjacent Uinta Basin was simultaneously buried beneath an additional 10,000 feet of Tertiary-age rocks—an amazing 35,000 to 40,000 feet of vertical deformation! The Uinta Mountains probably reached their maximum elevation by the end of the Laramide uplift about 34 million years ago. The maximum elevation reached is uncertain but was likely never much more than the current elevation because erosion probably kept pace with uplift.

What is the difference between the western and eastern Uinta Mountains?

Most people notice the difference in topography across the Uintas—high-elevation peaks in the west and lower-elevation peaks in the east. The informal line topographically dividing the western and eastern Uintas is roughly 10 to 15 miles west of U.S. Highway 191. In addition to topography, there are several geologic reasons to divide the range. The broad generally east-westtrending Uinta arch is actually two offset anticlinal structures. The western anticline trends nearly east-west whereas the eastern anticline trends more southeast-northwest. The change in trend and misalignment were caused by a northwest-trending fault that cuts diagonally across the range. Not only does the fault explain the misalignment of the two anticlines, it also explains why older Uinta Mountain Group rocks on the east are displaced next to younger rocks on the west, and why the oldest rocks in the Uintas are exposed in the eastern part.

Lithologic changes also occur from west to east within the range. For example, the Mississippian Madison Limestone is mapped in the east but the distinctive, age-equivalent Gardison, Delle Phosphatic Member, and Deseret Limestones are mapped in the west. The Triassic marine Thaynes Formation in the west pinches out eastward and becomes part of the non- to marginal-marine Moenkopi Formation. Middle Jurassic formations transition from mostly marine beds of the Arapien Formation in the west to more nearshore, tidal flat, and fluvial beds of the Carmel Formation in the east. Interestingly, all of the lithologic changes occur at about the middle of the range.

Why are the highest peaks found only in the western Uinta Mountains?

The Uintas have more peaks higher than 11,000 feet than any other mountain range in Utah, and have Utah’s only peaks over 13,000 feet, including Kings Peak, our highest at 13,528 ± 6 feet. These peaks are concentrated in the western part of the range whereas peaks in the eastern Uintas barely reach 10,500 feet in elevation. The western peaks may have always been a little higher because the earlier Sevier orogeny may have thickened the crust beneath the western part of the range. However, the peaks in the eastern Uinta Mountains were likely taller at the end of the Laramide orogeny than they are now. About 25 million years ago, extension caused the eastern Uintas to collapse down relative to the western Uintas mostly along the previously mentioned northwest-trending fault, augmented by additional downward movement of the Uinta and Sparks faults on the north flank. The eastern Uinta Mountains were lowered a minimum of about 500 feet but may have dropped as much as about 1000 feet.

Were the Uinta Mountains completely covered in glaciers during the Pleistocene ice ages?

The eastern Uinta Mountains did not accumulate enough ice to form glaciers due to their lower elevation, but they were no doubt covered in snow much of each year. The western Uintas, on the other hand, did have thick ice and glaciers. Most of the glaciers started in cirques (steep-walled basins) near the range crest on the north and south sides of the topographic divide, forming a chain of glaciers bounded by protruding snowed-covered “island” peaks. However, glacial ice did cross the crest at Bald Mountain Pass on the Mirror Lake Scenic Highway (Utah State Highway 150), Squaw Pass, Smiths Fork Pass, and Divide Pass.

Do the Uinta Mountains have mineral deposits?

The Uinta Mountains seemingly have only limited concentrations of mineral and ore deposits, which is surprising since the western extension of the Uinta arch is associated with large mining districts like the Park City, Big and Little Cottonwood, Bingham Canyon, and Gold Hill. The mineralization that is present tends to be localized iron, copper, and manganese deposits along the south flank fault zone; an example is the Iron Mine Creek area. The Carbonate district at Dyer Mountain, located along the northwest-trending fault zone near the center of the range, includes the now-inactive Dyer, Silver King, and Pope mines that produced copper, silver, lead, zinc, and minor gold. Minor copper and associated minerals also occur in Jesse Ewing Canyon and in the Red Creek area. These occurrences are associated with metamorphic and igneous rocks (Red Creek Quartzite) along the Uinta fault zone. Finally, ornamental fibrous calcite is being mined in the Blind Springs area along the south flank fault zone.

As for the infamous Lost Spanish Gold Mine—no one has ever found a trace—yet!