You are here: Home1 / Maps & Publications2 / Survey Notes3 / Glad You Asked4 / Glad You Asked: Why Are There So Many Natural Arches in Utah?
Menu
SURVEY NOTES • JANUARY 2016

Glad You Asked: Why are there so many natural arches in Utah?

Utah’s Colorado Plateau is home to the densest concentrations of natural arches found anywhere in the world. Arches National Park alone claims to be home to over 2,000 documented natural sandstone arches with diameters of at least 3 feet. At least 800 significant arches have been photographed and identified elsewhere in the state and thousands of others are estimated to exist. Six of the world’s fifteen largest known natural arches are found in Utah. Such impressive statistics often give rise to the question, “What is it about Utah and the Colorado Plateau that makes natural arches so prevalent?” 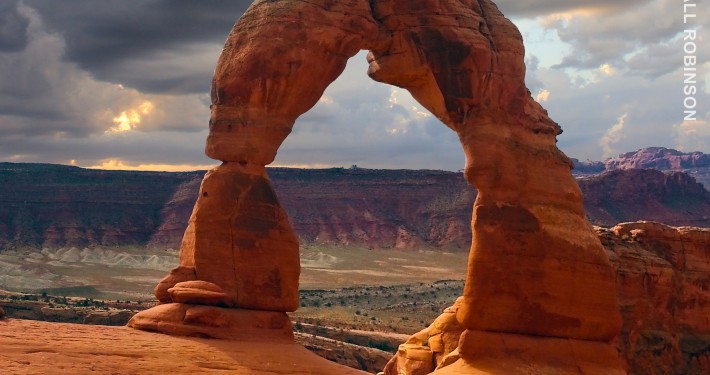 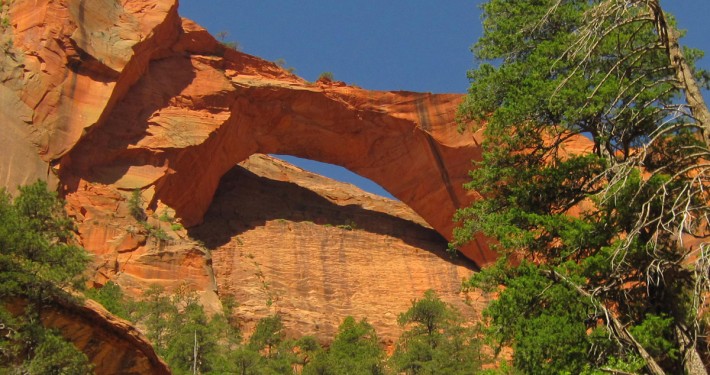 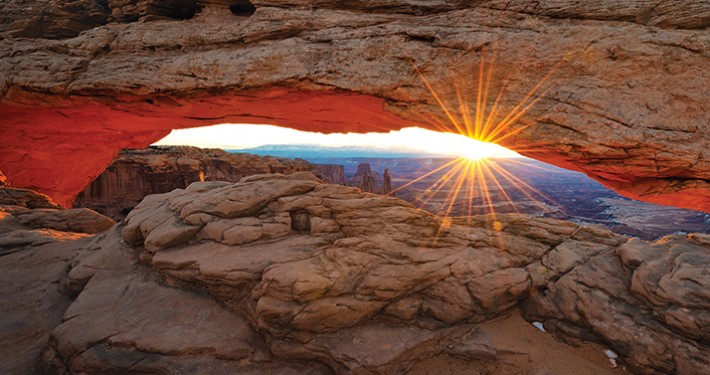 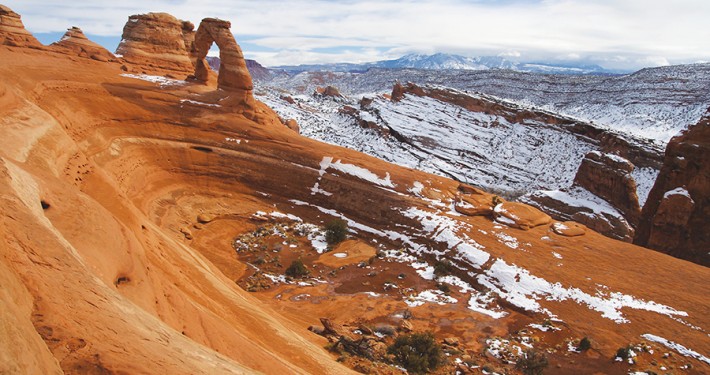 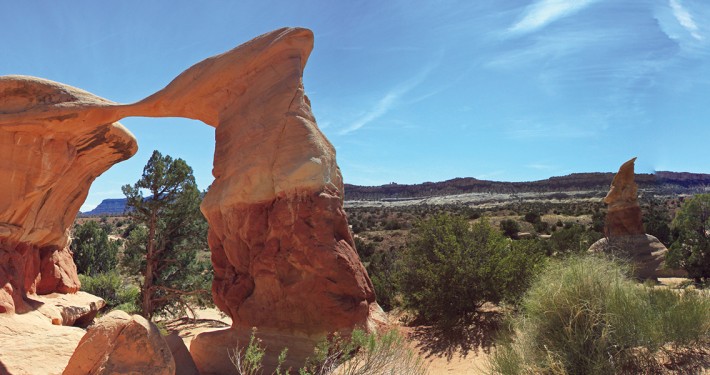 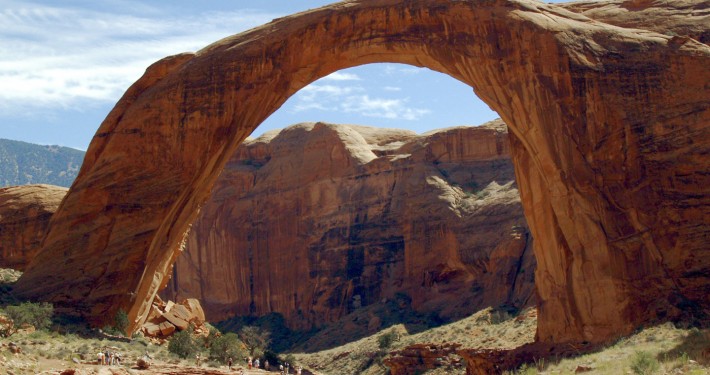 Arches form because the shape is nature’s most effective geometry for holding up overlying strata. The semicircular shape of an arch is actually the most effective load-bearing form in nature because of the manner in which it distributes the compressional stresses and eliminates the extensional stresses in the surrounding rock. It is the shape that most effectively follows nature’s rule of getting the best natural stability with the least amount of effort.

The Natural Arch and Bridge Society defines a natural arch as “a rock exposure that has a hole completely through it formed by the natural, selective erosion of rock, leaving a relatively intact frame.” In a colloquial sense, a natural arch is often defined more loosely as a rock formation composed of a curved or vaulted rock structure which supports its own weight without necessarily being a free-standing bridge.

Natural arches form in a variety of rock types such as limestone, shale, granite, or even basalt. However, in Utah, sandstone is the most common geological substrate for their formation. Several of Utah’s sandstone bedrock units meet the favorable conditions of being strong enough to support the weight of large natural arches, yet soft enough to be easily eroded by the natural processes of wind, water, and gravity. The region’s semiarid climate also plays an important role in forming and maintaining the needed exposures of these sandstone units. Because of sandstone’s unique permeability and porosity (the ability of water to flow through its pore spaces), a climate that is too wet tends to destroy sandstone’s ability to form cliffs by allowing groundwater to leach out too much of the mineral cement that holds the sand grains together. On the other hand, a climate that is too dry will not sustain the perennial streams responsible for the effective development of cliffs and canyons where arches most often form. 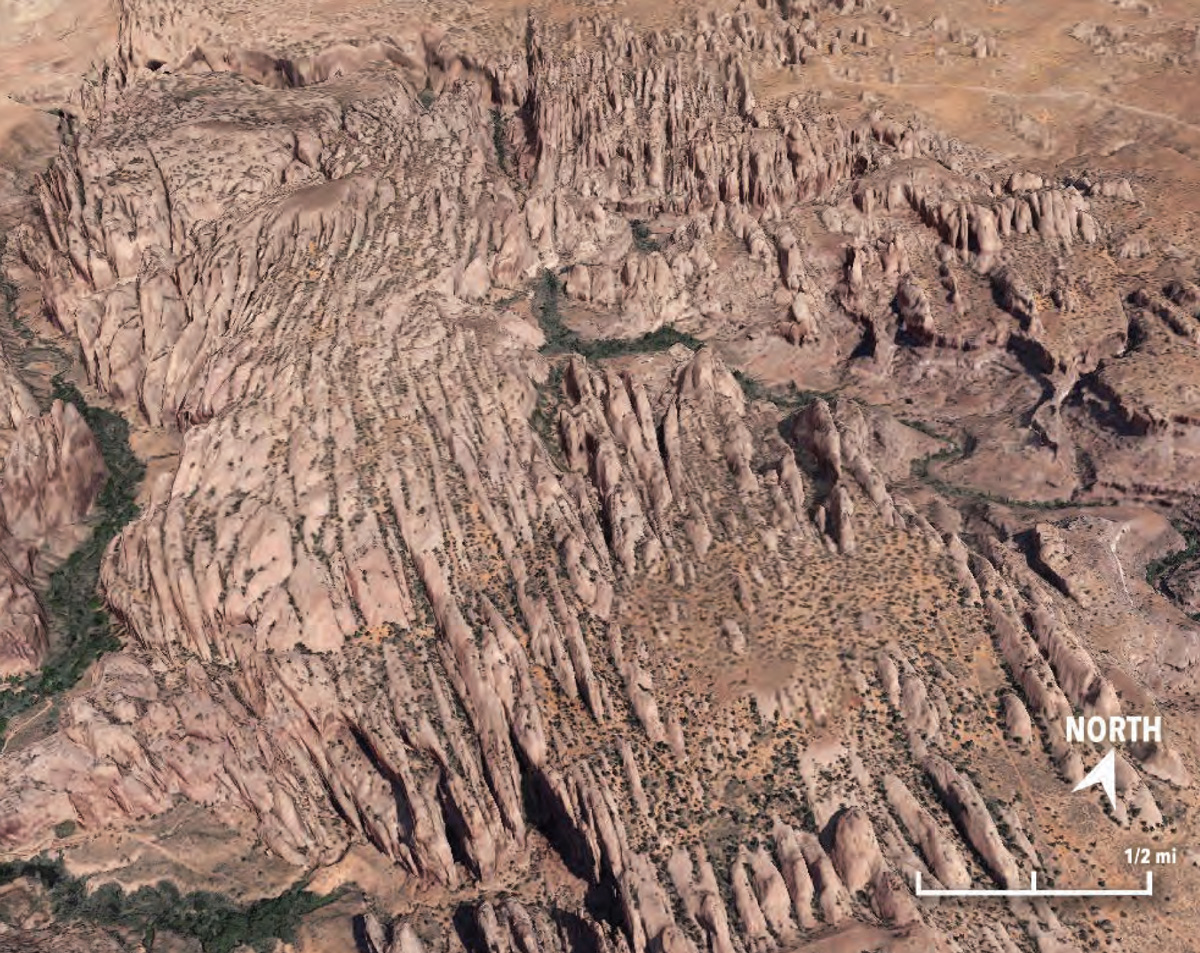 Oblique aerial view of the parallel joint pattern formed in the Entrada Sandstone near Arches National Park in southeastern Utah. The axis of the Moab Valley anticline runs along the left side of the image. GoogleEarth imagery ©2015 Google Inc., Landsat. Used with permission.

Arch formation in Utah is also facilitated by an abundance of regional, parallel joint systems or sequences of bedrock fractures. These joint systems tend to be located on the flanks of broad, gently sloping uplifts or folds. Many of the arches found in iconic places such as Arches, Capitol Reef, Canyonlands, and Zion National Parks, for instance, formed along deeply eroded fracture systems bordering folds created during compressional tectonic events. In some areas, such as Arches National Park, subsurface salt migration played a role in creating these elongated domed structures. In other areas, such as Zion National Park, more recent extensional tectonics played a role in enlarging preexisting joint systems. Over time, these joints and fractures become exposed at the surface and erode into a network of canyons and rock fins ideal for the formation of arches.
Joint systems can also form independent of regional fold or fault zones. In many parts of Utah, arches form along joints that develop parallel to the walls of deep canyons. As streams carve canyons into the bedrock, lateral pressure is removed, allowing the bedrock to fracture as it relaxes and expands into the newly created space. Expansion of ice in these fractures greatly accelerates this process. In many of Utah’s sandstone alcoves, “sheeting” of the rock is evidence of this slow relaxing and expansion of rock once under great pressure. 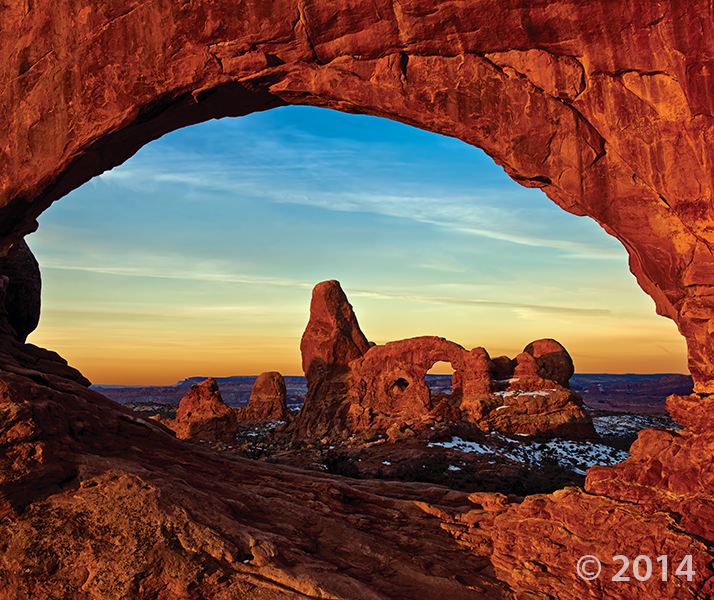 Utah is also unique in its abundance of entrenched river systems, which often form spectacular natural bridges. A natural bridge is a subtype of natural arch that is primarily water-formed and often spans a waterway such as a stream. Many of Utah’s natural bridges, such as those found at Natural Bridges National Monument, were formed as the gentle uplift of the Colorado Plateau caused the region’s rivers and streams to become entrenched in deep canyons, while maintaining their original meandering courses. As these entrenched meanders deepened and widened over time, erosion and undercutting of the canyon walls on the outside of meander bends eventually allowed the river to break through, rerouting the river to flow along the shorter course under the newly formed natural bridge. Rainbow Bridge near Lake Powell, Coyote Natural Bridge, and the three large bridges at Natural Bridges National Monument are a few of Utah’s best examples of this type of arch.

Variability in the mineral cements of many of Utah’s exposed sandstone layers is another important factor in the formation of arches in the state. Small arches and alcoves tend to be more common in regions where groundwater movement and other processes have created abundant irregularities in the hardness of the supporting sedimentary units. These regions of poorly cemented sand or variable hardness can be created as the sandstone is being deposited and cemented or by post-depositional processes, such as mineral leaching, surface evaporation, or groundwater movement. When a sandstone layer is exposed, irregularly cemented areas often differentially erode in ways more likely to create arches and alcoves. In Utah these types of irregularities in cementation are responsible for hundreds of small arches and windows in places like Goblin Valley and Snow Canyon State Parks.

It is the various combinations of these arch-forming components which have made Utah’s Colorado Plateau region one of the world’s densest concentrations of arches.