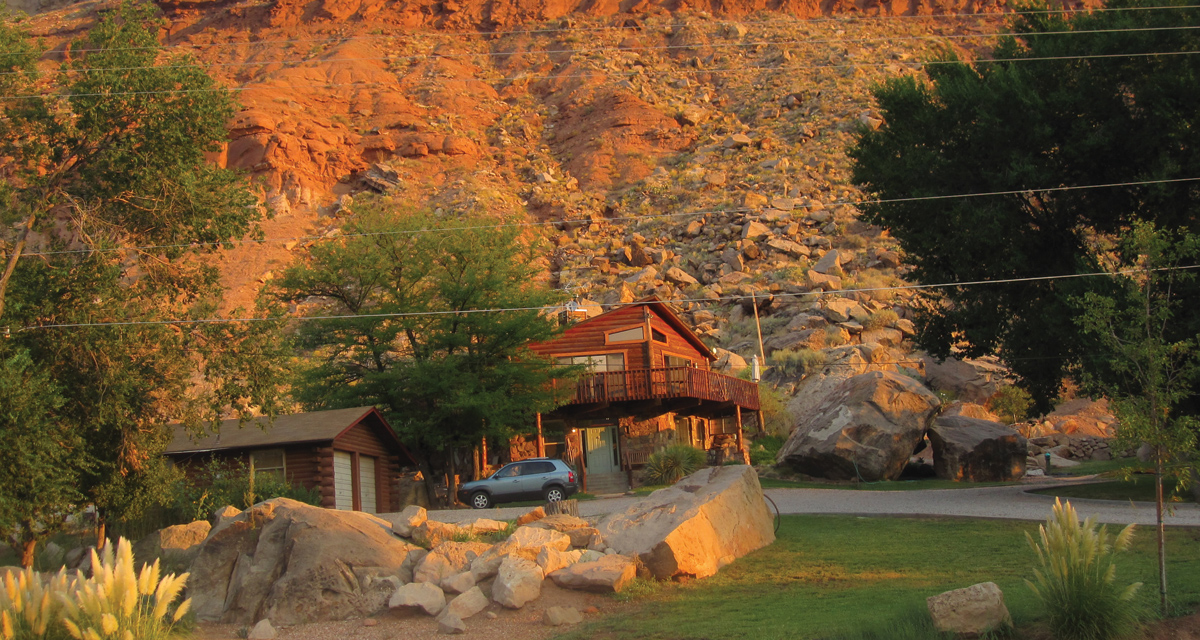 Before and after pictures of a home demolished during a fatal rockfall in Rockville, Utah. Two people perished when their house was struck by the rockfall. Photos taken September 29, 2010, and December 13, 2013 by Tyler Knudsen. 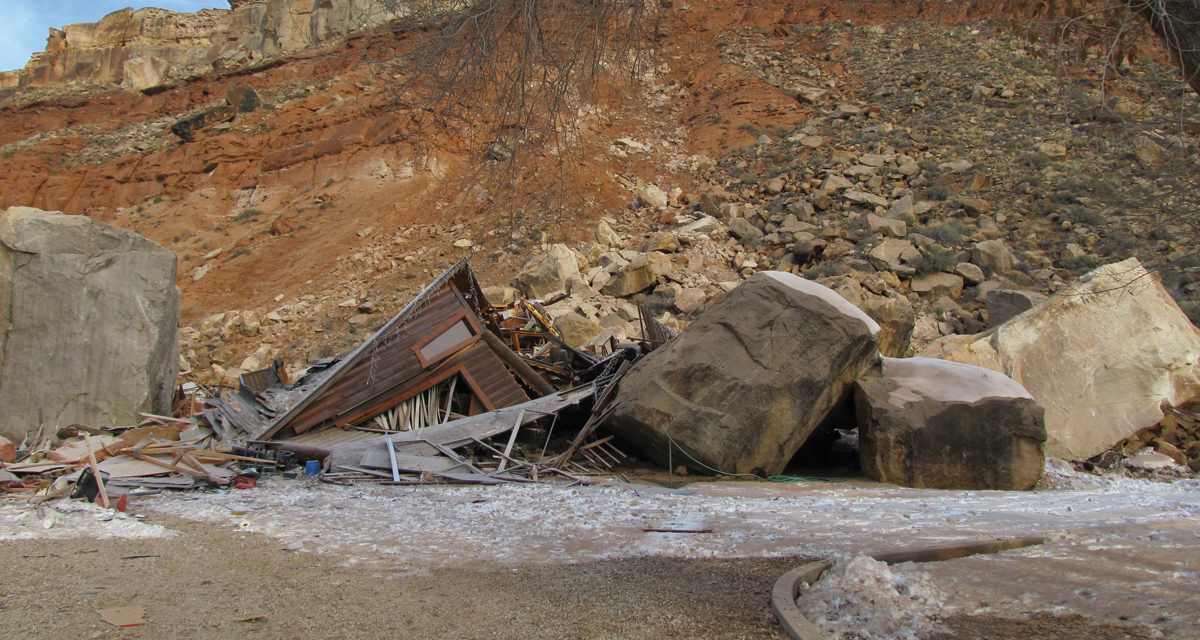 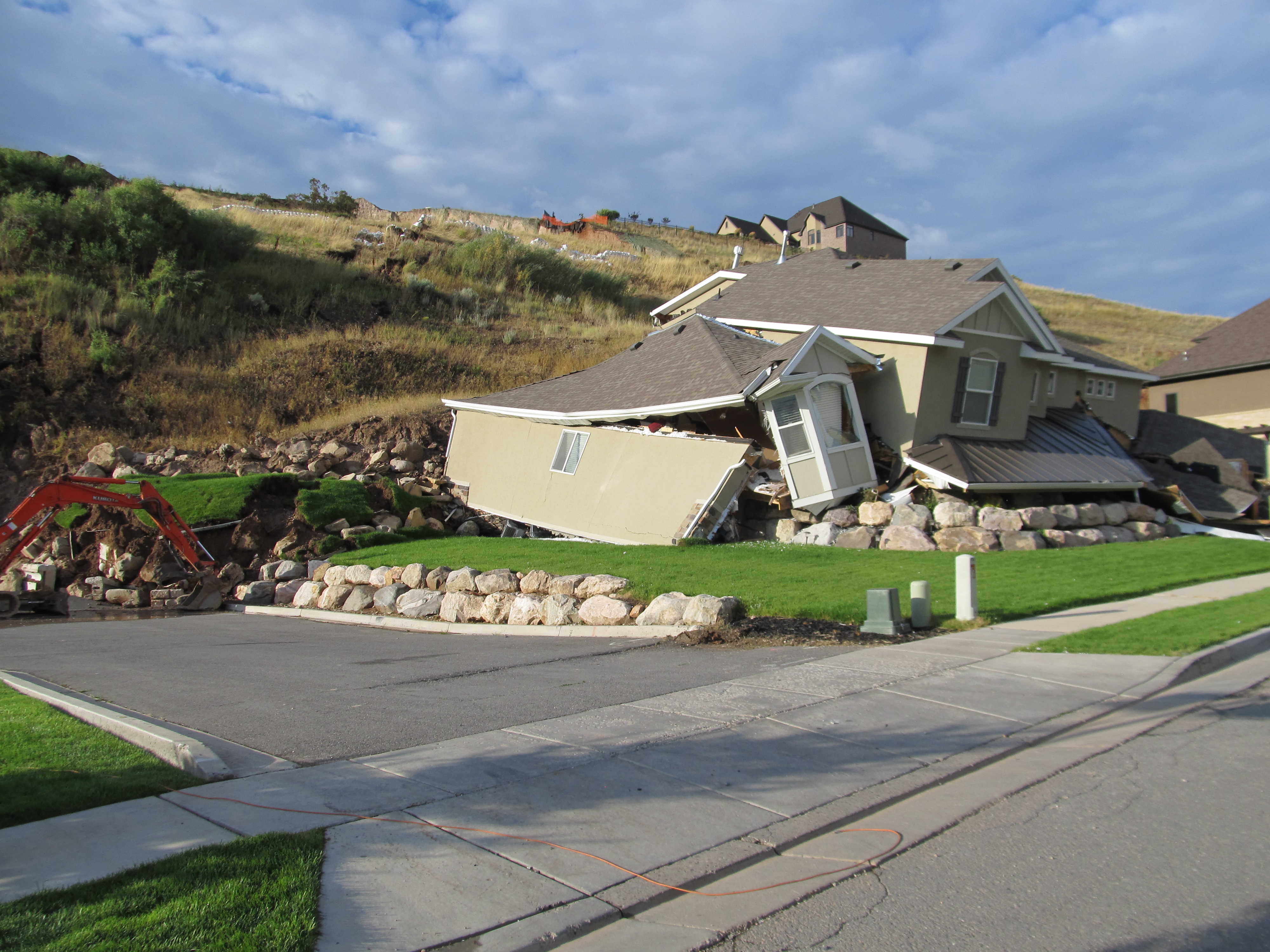 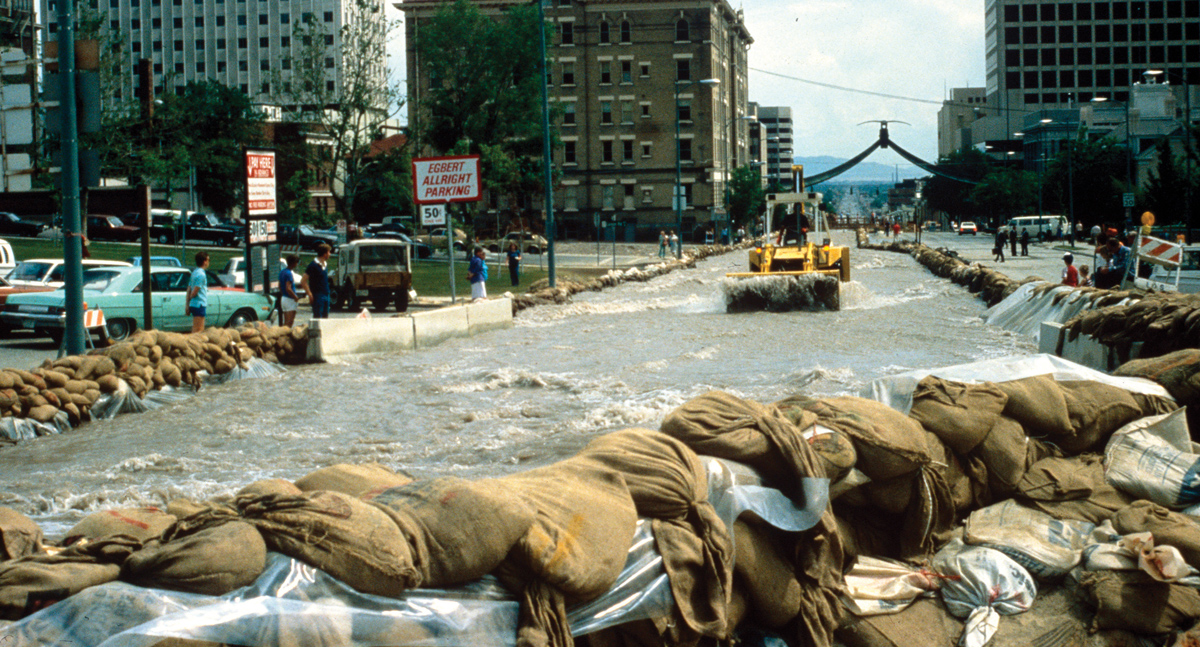 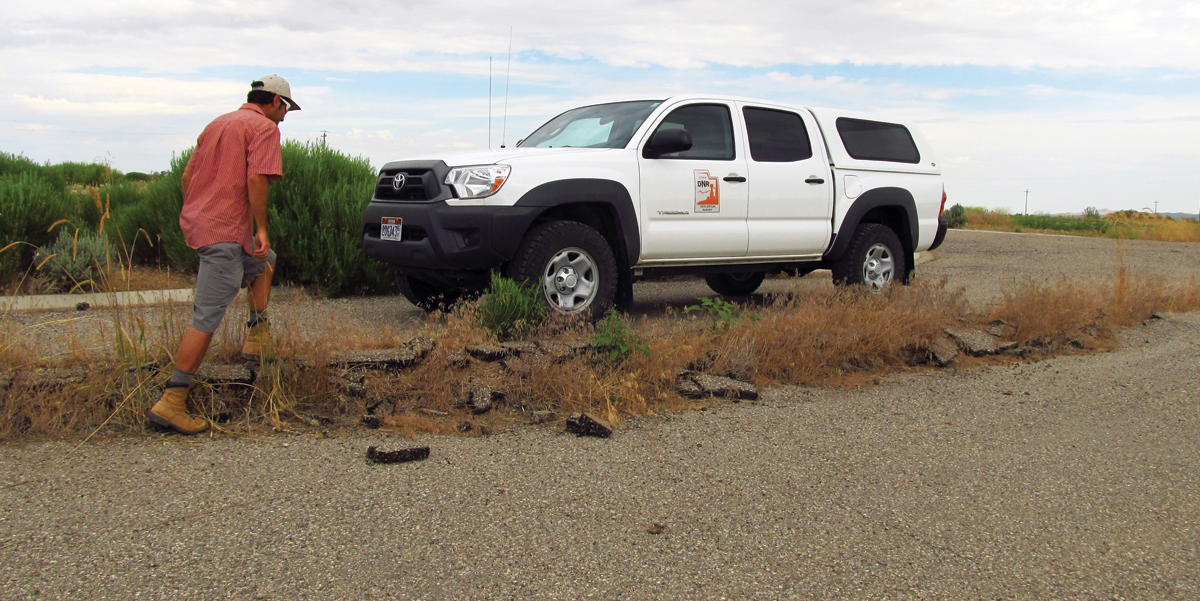 Utah’s scenic landscapes are the result of natural geologic processes, many of which are still active today and have the potential to damage homes and endanger lives. Not all geologic hazards can be avoided; however, you can significantly increase your safety and reduce your risk of property damage by identifying which geologic hazards may affect you, learning more about them, and then taking steps to lessen your risk. If you are buying, building, or selling a home in Utah, here are some geologic hazards that you should be aware of.

Of all the geologic hazards present in Utah, earthquakes pose the greatest threat to human life and structural damage from a single event. The Wasatch fault zone is the longest and most active fault in the region, extending 240 miles from north of Malad City, Idaho, to near Fayette, Utah, but there are hundreds of other hazardous faults across the state that have the potential to generate large earthquakes.

Surface faulting occurs during large earthquakes (generally magnitude 6.5 or greater) when the fault rupture reaches the ground surface and creates a fault scarp (a vertical break or offset). Generally, homes that straddle or are very close to fault lines have the greatest risk of damage from surface faulting.

Liquefaction may occur when loose, water-saturated, sandy soil is subjected to strong ground shaking and the soil behaves more like a liquid than a solid, which can cause houses to settle or tilt. Liquefaction potential is typically higher on valley floors and near streams and other water bodies. Landslides (and especially rockfalls) can be triggered by ground shaking, and flooding can result from dam failure, stream obstruction, water-line or canal breaks, and tilting (subsidence) of the land near water bodies.

The very mountains and hillsides that provide the most enticing scenery often have the highest risk of hazards related to slope failure. Most landslides occur during periods of rising groundwater levels due to excessive rainfall, snowmelt, or irrigation, and rockfalls are common in spring and summer months due to snowmelt, freeze-thaw cycles, and cloudburst storms. Landslides can move very slowly or very rapidly and can damage homes above, on, or below the slide area.

Both heavy precipitation and rapid spring snowmelt can cause Utah’s streams and lakes to swell, overflowing their banks and saturating nearby floodplains. In areas with shallow groundwater, increased precipitation may cause subsurface structures such as basements and septic-tank soil-absorption fields to flood. Cloudburst storms can generate devastating localized flooding, including flash floods. Localized flooding and debris flows (mudflows) can also occur on alluvial fans located on the valley floor at the mouths of canyons.

The vast majority of geologic hazard fatalities in Utah to date have come from exposure to radon gas, which is a known cause of lung cancer. Radon gas has no smell, taste, or color. It is the product of radioactive decay of uranium, which is naturally occurring in most rock and soil types. While radon can be found both indoors and outdoors, only indoor radon levels reach dangerous concentrations because the gas can collect in enclosed spaces rather than dispersing into the atmosphere. Radon-hazard-potential maps are available both at the state scale and as detailed maps of more populous areas, and can help you determine if a radon test is necessary. Inexpensive radon testing kits are available through http:// radon.utah.gov or at your local home improvement store.

It is important to remember that even when a local government approves a subdivision or building permit, that does not guarantee safety from geologic hazards, and these hazards are not covered by standard homeowner’s insurance. Also, when buying a home, keep in mind that Utah law does not require previous owners or real estate agents to disclose geologic hazards. It is therefore prudent to conduct your own geologic-hazard research for your area by looking at published geologic hazard maps, along with any relevant site-specific investigations, if available.

The UGS Geologic Hazards Program helps protect Utah’s public health and safety by investigating geologic hazards, providing state and local governments and the public with information and technical services, preparing geologic-hazard maps and publications, and responding to geologic-hazard emergencies. In order to document and better understand geologic hazards, the UGS encourages cities, counties, and the public to inform us of events when they occur so that we may investigate the hazard if warranted. For more information on geologic hazards, visit http:// geology.utah.gov/hazards/.