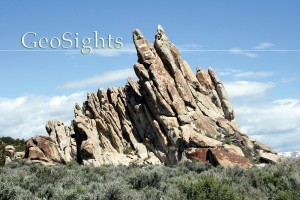 At Devils Playground, spires of rock greet the visitor. 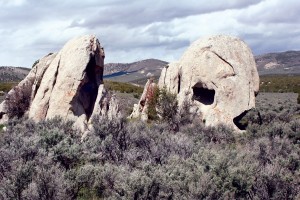 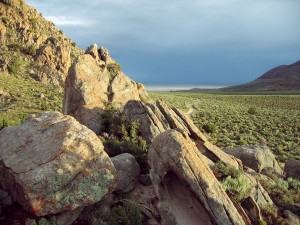 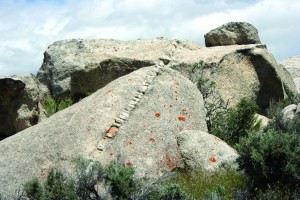 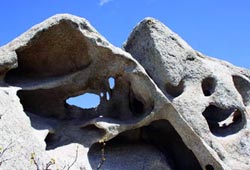 Introduction: Why take your kids to the neighborhood playground, when you can visit a playground that can inspire your sense of geologic adventure?

Devils Playground is not your typical playground at the park, but a playground of granitic rock weathered into fantastic forms and eerie shapes.

Located on Bureau of Land Management and state land, Devils Playground is a relatively unknown geologic curiosity found in a remote region of northwestern Utah.

Later, small magma bodies intruded into the granitic rock forming pegmatites (coarse-grained igneous rocks with interlocking quartz crystals, usually found as irregular dikes or veins). The pegmatites are fairly common, several inches in thickness, and extend hundreds of feet. They represent the last and most hydrous (waterrich) portion of magma to crystallize. The pegmatites are easy to locate because they are more resistant than the surrounding rock, thus they resemble ribs and bones sticking out in relief.

Basin and Range faulting and uplift of the Grouse Creek Mountains (approximately 13 million years ago) subjected the region to extensive physical weathering (surface water runoff and freeze-thaw), which over millions of years slowly peeled off the overlying sediments and sedimentary rocks. A thickness of roughly 3 to 6 miles of rock and sediment was removed before exposing the granitic rocks of the Emigrant Pass pluton.

Once the rocks were uncovered, physical and chemical weathering (a variety called spheroidal or onion-skin) began attacking the rocks. In spheroidal weathering, joints or fractures create initial openings allowing surface water to access the rock from all sides. Water seeping along these fractures slowly decomposes or alters the mineral composition of the granitic rock, causing the rock to weather inward. As a result, rounded shells of decomposed rock are repeatedly loosened and peeled off the unweathered core like the skin of an onion.

The rate of weathering is greatest along the corners and edges where fractures and joints intersect because they have a greater surface-area-to-volume ratio than the rock faces. All of the “devils,” alcoves, spires, arches, and small caves found at Devils Playground can be attributed to these physical and chemical weathering processes.