This 43-page report presents new Interferometric Synthetic Aperture Radar (InSAR) analysis of ground water subsidence in Cedar Valley in Iron County, Utah. This analysis is based on InSAR data from the ERS-1/2 satellites from 1992 to 2000, and the Envisat satellite from 2004 to 2010. A stack of five consecutive interferograms from the 1992-2000 time period and a stack of four consecutive interferograms from the 2004-2010 time period are included in this report; however, decorrelation in the vicinity of the Enoch graben makes an estimate of total deformation impossible using the stacks. In total, surface deformation has impacted approximately 256 km² (100 mi²) in Cedar Valley. Subsidence rates in the vicinity of the Enoch graben increased from approximately 0.5-1.0 cm/yr to roughly 1-2 cm/yr after 1999. Similarly, rates in central Cedar Valley show a general increasing trend after 1999, but rates appear to be more erratic than the other two sites. The spatial distribution of deformation in Cedar Valley correlates well with both the location of observed fissuring as well as the location of both municipal and private groundwater production wells. The fissuring observed near Quichapa Lake, as well as within the Enoch graben, is likely a direct result of groundwater pumping in these areas. 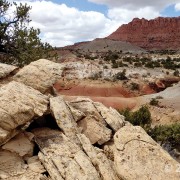